Nitroxides as Antioxidants and Anticancer Drugs
Next Article in Special Issue

(1) Background: Plant pathogenic fungi often display high levels of host specificity and biotrophic fungi; in particular, they must manipulate their hosts to avoid detection and to complete their obligate pathogenic lifecycles. One important strategy of such fungi is the secretion of small proteins that serve as effectors in this process. Microbotryum violaceum is a species complex whose members infect members of the Caryophyllaceae; M. lychnidis-dioicae, a parasite on Silene latifolia, is one of the best studied interactions. We are interested in identifying and characterizing effectors of the fungus and possible corresponding host targets; (2) Methods: In silico analysis of the M. lychnidis-dioicae genome and transcriptomes allowed us to predict a pool of small secreted proteins (SSPs) with the hallmarks of effectors, including a lack of conserved protein family (PFAM) domains and also localized regions of disorder. Putative SSPs were tested for secretion using a yeast secretion trap method. We then used yeast two-hybrid analyses for candidate-secreted effectors to probe a cDNA library from a range of growth conditions of the fungus, including infected plants; (3) Results: Roughly 50 SSPs were identified by in silico analysis. Of these, 4 were studied further and shown to be secreted, as well as examined for potential host interactors. One of the putative effectors, MVLG_01732, was found to interact with Arabidopsis thaliana calcium-dependent lipid binding protein (AtCLB) and with cellulose synthase interactive protein 1 orthologues; and (4) Conclusions: The identification of a pool of putative effectors provides a resource for functional characterization of fungal proteins that mediate the delicate interaction between pathogen and host. The candidate targets of effectors, e.g., AtCLB, involved in pollen germination suggest tantalizing insights that could drive future studies. View Full-Text
Keywords: biotrophic pathogen; anther smut; fungal effectors; Microbotryum violaceum biotrophic pathogen; anther smut; fungal effectors; Microbotryum violaceum
►▼ Show Figures 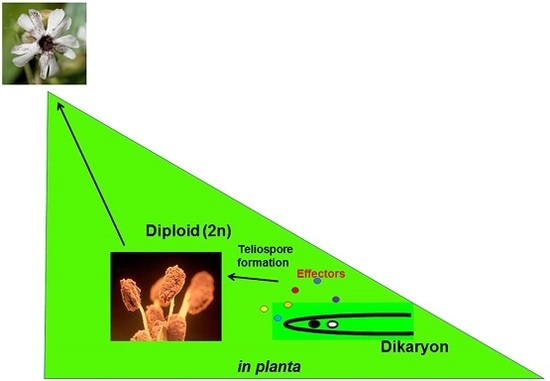