More than two hundred years after its discovery, lactate still remains an intriguing molecule. Considered for a long time as a waste product of metabolism and the culprit behind muscular fatigue, it was then recognized as an important fuel for many cells. In particular, in the nervous system, it has been proposed that lactate, released by astrocytes in response to neuronal activation, is taken up by neurons, oxidized to pyruvate and used for synthesizing acetyl-CoA to be used for the tricarboxylic acid cycle. More recently, in addition to this metabolic role, the discovery of a specific receptor prompted a reconsideration of its role, and lactate is now seen as a sort of hormone, even involved in processes as complex as memory formation and neuroprotection. As a matter of fact, exercise offers many benefits for our organisms, and seems to delay brain aging and neurodegeneration. Now, exercise induces the production and release of lactate into the blood which can reach the liver, the heart, and also the brain. Can lactate be a beneficial molecule produced during exercise, and offer neuroprotection? In this review, we summarize what we have known on lactate, discussing the roles that have been attributed to this molecule over time. View Full-Text
Keywords: lactic acid; brain metabolism; lactate transporters; blood-brain barrier; lactate receptors; exercise and lactate lactic acid; brain metabolism; lactate transporters; blood-brain barrier; lactate receptors; exercise and lactate
►▼ Show Figures 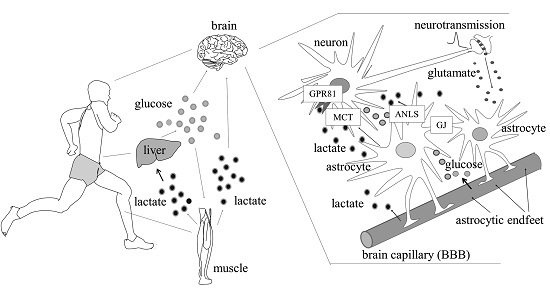