Cardiovascular disease (CVD) is one of the leading causes of disability and death worldwide. In 2013, the World Health Organization (WHO) reported that high blood pressure (BP) is common and the most important risk factor of CVD, and nearly 40% of the world’s adult population has hypertension. The prevalence of hypertension is increasing rapidly, and several epidemiological studies have reported that it would escalate by 24% in developed countries and 80% in developing countries by 2025 [1,2]. The majority, 90%–95% of individuals with hypertension, are classified as having “essential” hypertension, wherein the medical establishment claims that the cause is idiopathic or unknown [3,4]. Hypertension is influenced by both genetic and environmental factors. Among the environmental factors, salt is the major factor that increases blood pressure and salt intake-induced elevation of blood pressure is a major public health challenge [5]. Although dietary sodium is a well-known essential electrolyte that plays an important role in the regulation of body fluids and the cardiovascular system, the physiological need of sodium is only around 1.2 g/day. However, the global salt intake is much higher at approximately 9 g/day [6]. Despite salt’s important role in the body, excessive consumption of salt is deleterious for health, mainly because it triggers, at least in part, the development of essential hypertension and related cardiovascular complications [7,8].
These days, researchers are extensively studying several naturally occurring traditional medicines for preventing hypertension [9,10,11]. Salicornia europaea is a well-known bioactive halophyte that grows in high-salt coastal marshes, including those along the western coast of South Korea. S. europaea has been used as a folk medicine to treat various kinds of diseases such as cephalalgia and scurvy [12], and is consumed in a variety of ways in the coastal areas of Korea. The use of the plant extract has been recently extended to the development of functional foods to maintain the health of the cardiovascular system, especially as a substitute for purified salt. S. europaea is rich in salt and minerals such as magnesium, calcium, potassium, and iron; therefore, it is suitable for developing a purified salt substitute [13]. However, the effect of S. europaea extracts (SE) on vascular dysfunction and blood pressure in comparison with those of highly purified salt remains unclear. Therefore, in this study, we investigated whether intake of SE can influence the function of coronary arteries and blood pressure in an animal model, especially in comparison with highly purified salt.

In porcine coronary arteries, bradykinin produced a relaxing effect, which was mediated by endothelial nitric oxide synthase (eNOS)-derived NO [14]. To test whether high salt induced vascular dysfunction or not, porcine coronary artery rings were incubated in a culture medium with high salt. The concentration of sodium in the Dulbecco Modified Eagle medium (DMEM) was 133 mM; therefore, a medium with high NaCl was prepared by adding NaCl and SE at the final concentration of 160 mmol/L sodium. The degree of relaxation induced by bradykinin was dose-dependent. The maximal relaxation was 87.96% ± 2.48% in the control coronary artery, whereas it was significantly reduced by pretreatment with high salt (160 mmol/L sodium, maximal response was 65.21% ± 3.76%) for 18 h (Figure 2). Despite treatment with the same amount of SE as the salt concentration, equivalent to 160 mmol/L of sodium, SE did not mediate vascular dysfunction. These results suggested that high salt induced vascular dysfunction, which was prevented by components in SE. Therefore, experiments were performed to isolate single compounds from SE, and to identify the active compound. Analysis of SE led to the identification of three major known compounds and some unknown compounds (Figure 1). The vascular reactivity study indicated that p-coumaric acid and trans-ferulic acid alone induced vasorelaxation in a dose-dependent manner in the coronary artery (Figure 3A); however, this vasodilation effect was remarkable only at high concentrations. However, vascular dysfunction induced by high salt was strongly ameliorated by treatment with trans-ferulic acid, not by 5-(hydroxymethyl)furfural or p-coumaric acid (Figure 3B). Since previous investigations have shown that ferulic acid enhanced vasodilation through an NO-mediated mechanism [15], the role of this pathway in the vasoprotective effects of SE and ferulic acid was determined. Pre-treatment with the eNOS inhibitor, L-NAME, blocked the vasoprotective effect of SE and ferulic acid (Figure 3C). Taken together, these results suggested that SE ameliorated high salt-induced vascular dysfunction via the eNOS pathway and its protective effect is attributable to its component, trans-ferulic acid.

2.3. Influence of High Salt and SE on Body Weight and Food Consumption

2.4. Effect of SE on Blood Pressure in Normotensive Rat

During adaptive feeding, blood pressure in the SD rat groups did not differ significantly. A high NaCl diet (HS-SD group) for six weeks caused a significant increase in systolic blood pressure (SBP), diastolic blood pressure (DBP), and mean arterial pressure (MAP), in comparison with the values in the untreated control group (CTR–SD). However, SBP (HS–SD: 151.49 ± 3.11 vs. SE–SD: 137.56 ± 2.50 mmHg) and MAP (HS–SD: 108.11 ± 2.59 vs. SE–SD: 97.04 ± 2.31 mmHg) of the SE-treated group were significantly lower than those of the high NaCl-treated group were (Figure 5A,C). The DBP after SE treatment was slightly lower than that after high NaCl intake, but the difference was not significant (Figure 5B). This result suggested that highly purified salt intake had a significant effect on blood pressure while SE, which has the same high levels of NaCl, had little impact on blood pressure in a normotensive rat.

2.5. Effect of SE on Blood Pressure in Hypertensive Rats

At six weeks of age, the SBP, DBP, and MAP of all SHR groups (CTR–SHR, HS–SHR, and SE–SHR) were significantly higher than those of the CTR–SD group were (Figure 6A–C). The SBP, DBP, and MAP of the HS–SHR group were significantly higher than those of the CTR–SHR group were, indicating that high salt intake exacerbates hypertensive status. The SBP and DBP of the SE treatment group were slightly lower than those of the high salt treatment group were, but the difference was not significant. However, the MAP in the SE-treated group was significantly (10 mmHg) lower than that in the high salt group (HS–SHR: 149.91 ± 2.73 vs. SE–SHR: 139.02 ± 2.36 mmHg). Taken altogether, these results suggest that highly purified salt intake increased blood pressure while SE, which has the same high levels of Na, had little impact on blood pressure not only in normotensive rats, but also in hypertensive rats.

This study conforms to the Guide of Care and the Use of Laboratory Animals published by the US National Institutes of Health (NIH publication No. 85-23, revised 1996), and the protocol was approved by the local ethics committee (KAMSI-IACUC 15-KE-101).

4.2. Plant Material and Analysis of SE Constituents by HPLC

Vascular reactivity study was performed using porcine coronary arteries as described previously [29]. Briefly, the left anterior descending coronary arteries of porcine heart (from the local slaughterhouse in Mokpo, Jeonnam, Korea) were dissected, cleaned of connective tissue, and cut into rings (4–5 mm in length) carefully. Then, porcine coronary artery rings were incubated in DMEM at 37 °C in a humidified atmosphere (95% air/5% CO2) for 18 h, in the absence (control) or presence of a high concentration of sodium (NaCl was added into the culture medium to obtain a final concentration of 160 mmol/L sodium), SE (containing 55.6% of NaCl; therefore, SE was added into the culture medium to obtain a final concentration of 160 mmol/L sodium), 5-(hydroxymethyl)furfural, p-coumaric acid, trans-ferulic acid and L-NAME (an inhibitor of eNOS, 0.1 mmol/L). After preincubation in different conditions, the rings were suspended in organ baths containing oxygenated (95% O2 and 5% CO2) Krebs bicarbonate solution (mmol/L; NaCl, 119; KCl, 4.7; KH2PO4, 1.18; MgSO4, 1.18; CaCl2, 1.25; NaHCO3, 25; and d-glucose, 11; pH 7.4, 37 °C) for the determination of changes in isometric tension. Following equilibration for 90 min under a resting tension of 5 g, the rings were contracted twice with KCl (80 mmol/L). Thereafter, the rings were pre-contracted with the thromboxane mimetic U46619 (1–60 nmol/L) to about 80% of the maximal contraction and the relaxation in response to bradykinin or indicated compounds was dose-dependent.

The kidneys and hearts were maintained in cold physiological saline after scarifying and washing twice. Excess water was then removed using filter paper. Weights were determined, and the KI (kidney weight/body weight, KI) and CI (heart weight/body weight, CI) were calculated.

Tail arterial pressure was assessed by noninvasive tail-cuff plethysmography (BP-2000; Visitech Systems, Apex, NC, USA) after 1 week and 6 weeks. Before the administration of edible salt and SE, the rats were trained on the blood pressure device. One each day of blood pressure determination, 5 measurements were obtained and averaged for each rat.

All data are expressed as mean ± standard error of the mean (SEM). Statistical analysis of the data was performed using the Student’s t-test or multiway ANOVA followed by Fisher’s protected least significant difference test where appropriate. A value of p < 0.05 was considered statistically significant.

In the present study, we investigated the effect of SE on vascular dysfunction and hypertension. SE did not induce dysfunction of the coronary artery even though it had a high salt content. HPLC analysis revealed that SE contained 5-(hydroxymethyl)furfural, p-coumaric acid, trans-ferulic acid, and other unknown compounds. Among them, trans-ferulic acid was responsible for the vascular protective effect of SE. In the in vivo study, high intake of purified salt increased blood pressure in normotensive and hypertensive rats; however, intake of SE, which has the same quantity of sodium as that in high edible salt, had little effect on blood pressure compared to high intake of purified edible salt. This result further suggests that SE, as a substitute for purified salt, might prevent the occurrence of hypertension and ameliorate hypertension status.

This research was supported by an export strategy technology development project (114087-2), Ministry for Food, Agriculture, Forestry and Fisheries, Republic of Korea. 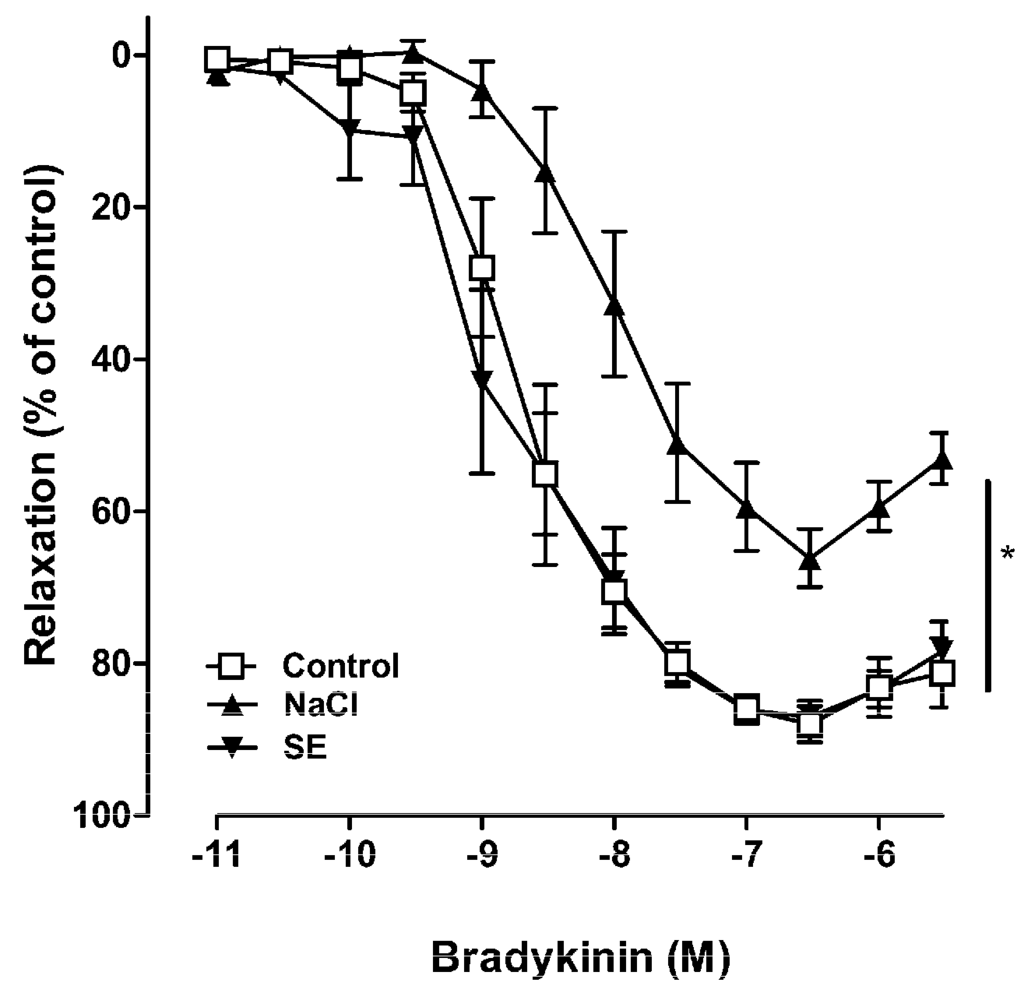 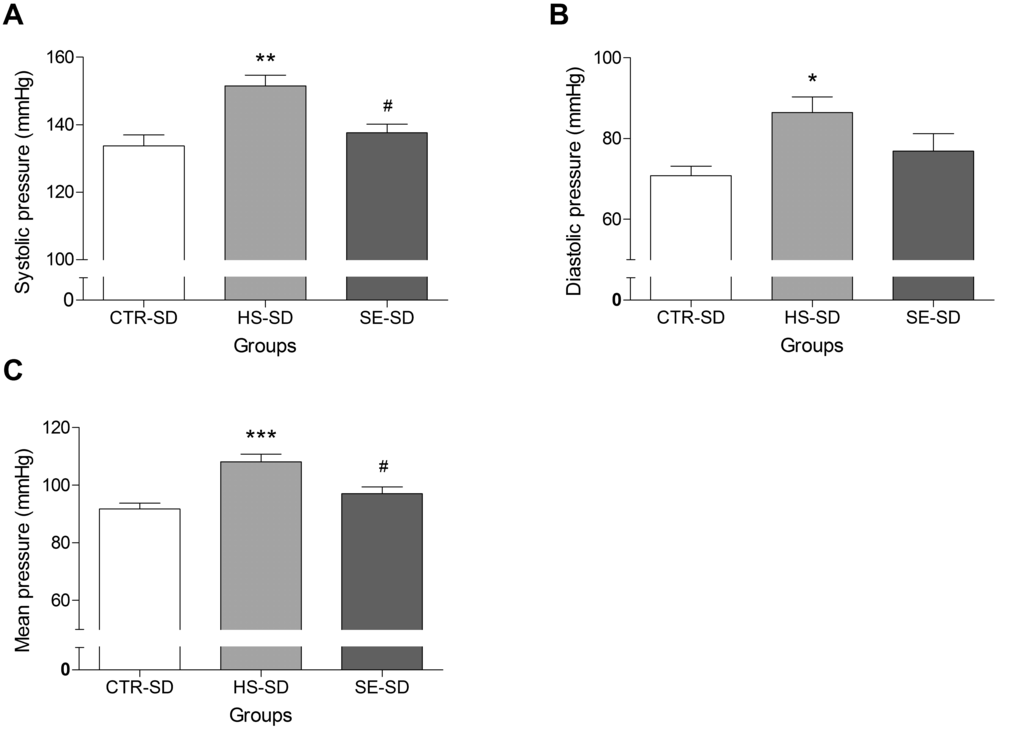