Molecular Mechanisms Elicited by d-Aspartate in Leydig Cells and Spermatogonia

Methylsulfonylmethane (MSM) is an organic sulfur-containing compound which has been used as a dietary supplement for osteoarthritis. MSM has been shown to reduce oxidative stress and inflammation, as well as exhibit apoptotic or anti-apoptotic effects depending on the cell type or activating stimuli. However, there are still a lot of unknowns about the mechanisms of actions of MSM. In this study, MSM was tested on colon cancer cells. 3-(4,5-Dimethylthiazol-2-yl)-2,5 diphenyltetrazolium bromide (MTT) assay and flow cytometric analysis revealed that MSM inhibited cell viability and increased apoptotic markers in both HCT-116 p53 +/+ and HCT-116 p53 −/− colon cancer cells. Increased poly (ADP-ribose) polymerase (PARP) fragmentation and caspase-3 activity by MSM also supported these findings. MSM also modulated the expression of various apoptosis-related genes and proteins. Moreover, MSM was found to increase c-Jun N-terminal kinases (JNK) phosphorylation in both cell lines, dose-dependently. In conclusion, our results show for the first time that MSM induces apoptosis in HCT-116 colon cancer cells regardless of their p53 status. Since p53 is defective in >50% of tumors, the ability of MSM to induce apoptosis independently of p53 may offer an advantage in anti-tumor therapy. Moreover, the remarkable effect of MSM on Bim, an apoptotic protein, also suggests its potential use as a novel chemotherapeutic agent for Bim-targeted anti-cancer therapies.
Keywords: MSM; HCT-116; apoptosis; Bim; colon cancer; JNK MSM; HCT-116; apoptosis; Bim; colon cancer; JNK

Natural products with low toxicity have been gaining attention for the treatment of various cancers, including colorectal carcinoma, which is the third most common cancer in the world [1]. One of these compounds, methylsulfonylmethane (MSM) is an organic dietary supplement which has been marketed for the last 20 years especially to alleviate arthritic symptoms, support joint flexibility, and maintain healthy joints. In animal studies, MSM has been shown to be well tolerated at an acute dose of 2 g/kg and not to cause any maternal or developmental toxicity up to 1000 mg/kg/day. These concentrations are five times higher than the doses used in humans [2,3]. Therefore, the low toxicity index and the probable bio-activity of MSM have prompted researchers to investigate the biological effects of MSM more elaborately. MSM has been shown to exert anti-inflammatory [4], anti-cancer [5], and anti-oxidative [6] effects in different studies. In recent years, researchers have become increasingly interested in the action mechanism of MSM on apoptosis in different in vitro and in vivo cancer models. It was reported that combination therapy of MSM (200 mM) and tamoxifen inhibited breast cancer tumor growth and metastasis both in vitro and in vivo by inhibiting the Janus kinase 2 (JAK2)/signal transducer and activator of transcription 5b (STAT5b) pathway [7]. In another study, suppressive activity of MSM against hepatic tumor development was examined and it was found that MSM decreased the growth of three different liver cancer cell lines by cleaving caspase-3, caspase-8, and poly (ADP-ribose) polymerase (PARP), and slightly decreasing Bcl-2 at 500 mM concentration [8]. MSM has also been reported to repress bladder tumor growth at 300 mM concentration when used in combination with JAK2 inhibitor AG490 by reducing STAT3, STAT5b, IGF-1R, VEGF, and VEGF-R2. These signaling molecules are related to the growth, progression, and metastasis of human bladder cancer [9].
It has been suggested that dysregulation of cell proliferation and apoptotic pathways leads to tumorigenesis, accumulation of cancer cells, resistance to chemotherapeutic drugs, angiogenesis, invasion, and metastasis [10]. Various intracellular signaling pathways regulate apoptosis, while the initiation and execution of this programmed cell death depend on the activation of the receptor- and/or mitochondrial-dependent death pathways [11]. Bcl-2 family proteins regulate the mitochondrial pathway of apoptosis as a response to various cytotoxic signals. The ratio of Bax/Bcl-2 is an important indicator of execution of apoptosis and the balance between the pro-apoptotic (Bax, Bak, Bim, Bid) and anti-apoptotic (Bcl-2, Bcl-xL, Bcl-w) Bcl-2 family proteins determine the fate of cells [12,13]. Recently, the pro-apoptotic molecule Bim has been gaining serious attention as a critical regulator of tissue homeostasis. Its expression level is strictly controlled in both transcriptional and post-transcriptional levels, which depends on cell, tissue, and apoptotic stimuli [14]. Bim has been shown to mediate tumor cell death in response to chemotherapeutic agents and, therefore, Bim-targeting therapies are considered as promising strategies to fight cancer [15].
In addition to Bcl-2 family proteins, members of the p53 family are also important players in the cellular stress response in cancer and, therefore, these genes may serve as therapeutic targets [16]. Apoptosis and cell cycle arrest are two main mechanisms which mediate the response of p53 to DNA damage [17]. Cells lacking the p53 gene can also undergo apoptosis via the modulation of different proteins. Moreover, several agents have been shown to induce apoptosis in cancer cells with deleted or mutant p53 [18,19,20]. p53 upregulated modulator of apoptosis (PUMA) is another pro-apoptotic protein which is involved in both p53 dependent and independent apoptosis. PUMA can interact with Bcl-2-like proteins, to free Bax and/or Bak, which then transmit apoptotic signals to the mitochondria. [21,22].
In addition to these apoptotic genes and proteins, the apoptotic process is affected by various other signaling pathways, including the mitogen-activated protein kinases (MAPKs) pathway. MAPK family members, including p44/42 (extracellular signal-regulated kinase, ERK1/2), JNK (c-Jun N-terminal kinases), and p38 MAPK are crucial for the regulation of cellular programs, such as proliferation, differentiation, development, transformation, apoptosis, and control of cellular responses to cytokines and stress [23,24]. JNK may exhibit both apoptotic or anti-apoptotic roles and dysregulation of the JNK pathway has been linked to cancer [25,26]. Apoptosis is mediated by activated JNK through a phosphorylation mechanism induced by UV irradiation, heat shock, chemotherapy, pro-inflammatory cytokines, and growth factors [27,28,29]. JNK 1- and JNK 2-deficient mouse embryonic fibroblasts have been shown to exhibit resistance to apoptosis induced by ultraviolet irradiation [30]. Various apoptotic or autophagic stress signals may also stimulate JNK [24]. JNK has been reported to activate or inactivate p53, Bcl-2, and Bcl-xL [31,32,33]. Thus, targeting the JNK pathway is an important strategy in treatment and prevention of cancer.
In this study we aim to elucidate the action mechanisms of MSM on apoptosis in HCT-116 colon cancer cells. The effects of MSM on important regulators of apoptosis, such as Bcl-2 family members, p53, and MAPKs, were examined.

2.5. MSM Treatment Modulated the Expressions of Various Genes and Proteins Involved in Apoptosis

HCT-116 p53+/+ and HCT-116 p53 −/− colon cancer cells were kindly provided by Bert Vogelstein and were cultured in 75 cm2 flasks, at 37 °C and 5% CO2 saturated air, in McCoy’s 5A medium containing 10% FBS, 1% l-glutamine, and 1% penicillin-streptomycin. FBS was inactivated in a 60 °C water bath for 30 min before medium preparation. Cells were trypsinized from flasks for passaging when they became 80% confluent. Cells were counted with trypan blue to seed an equal number of cells to wells.

MTT assay was used to determine the cytotoxic effects of MSM against HCT-116 colon cancer cells. The principle of the assay relies on the reduction of tetrazolium salt by mitochondrial dehydrogenase in viable cells [48]. Stock solutions of MSM were prepared in McCoy’s 5A culture medium. Briefly, cells were seeded (6 × 104 cells/well) in a 96-well plate before treatment with different concentrations (100–1000 mM) of MSM. After 24 h incubation, MTT solution was added to each well at a final concentration of 0.5 mg/mL. After 2 h of incubation, the supernatants were aspirated before dissolving the formazan product with 100 μL dimethylsulfoxide (DMSO). The absorbance at 540 nm was then read using a spectrophotometric microplate reader. Viability of cells without treatment was considered as 100% and results were calculated as viability % in comparison to non-treated cells. For JNK inhibition and caspase-3 activity assays, cells were pre-treated with JNK inhibitor (SP600125) and Z-VAD-fmk, which were dissolved in DMSO and applied to the medium of cells at final concentrations of 20 and 10 µM, respectively. Final concentration of DMSO in the incubation medium never exceeded 0.3% and cells without treatment were incubated with the same concentration of DMSO.

Apoptosis was measured by Annexin V-PE/7-AAD double-staining. Briefly, HCT-116 p53+/+ and HCT-116 p53 −/− colon cancer cells (8 × 105 cells/well) were seeded in six-well plates. Following incubation of cells with MSM (300, 400, and 500 mM) for 24 h, MSM-treated cells and cells without treatment were trypsinized, collected, and double-washed with PBS (phosphate-buffered saline) before resuspending in 1× binding buffer (500 μL) according to manufacturer’s instructions (Annexin V-PE/7-AAD apoptosis detection Kit, BD Biosciences). 100 μL of cell suspension was incubated with 5 μL Annexin V-PE and 5 μL 7-AAD at room temperature for 15 min. Cells were briefly vortexed before incubation for 15 min in the dark at room temperature. After this incubation, 400 μL 1× binding buffer was added to cells before flow cytometry analysis by Accuri C6 flow cytometry. The amounts of early apoptosis and late apoptosis were determined as the percentage of Annexin V-PE +/7-AAD− or Annexin V-PE +/7-AAD + cells, respectively.

Cells were lysed and lysates with equal amounts of protein were incubated with caspase-3 colorimetric DEVD-pNA substrate at 37 °C. The resulting colorimetric product was measured with a Multiskan™ GO microplate spectrophotometer (Thermo) at 402 nm according to the instructions of the Abcam Caspase-3 Kit, and caspase-3 activity was calculated as a fold change in comparison to cells without treatment.

Western blotting was performed as previously described [41]. The cells were harvested, washed with PBS, and lysed with Nuclear Extract Kit according to the manufacturer’s instructions (Active Motif, Carlsbad, CA, USA). Cell lysates were mixed with NEB 3× reducing blue loading buffer for denaturation. Equal amounts of protein were loaded to sodium dodecyl sulfate-polyacrylamide gel electrophoresis (SDS-PAGE) gels before transfer on to PVDF membranes. Bio-Rad Tetra Cell Blotting module was used for protein transfer from gels to membranes. After 1 h of transfer, membranes were washed with PBS and then blocked in PBS containing 5% non-fat dried milk. Membranes were then incubated with specific primary antibodies overnight at 4 °C. After three washes in PBS-Tween, membranes were incubated with the appropriate HRP conjugated secondary antibodies for 1 h at room temperature. Membranes were then washed with PBS-tween before detection step using an enhanced chemiluminescence Western blotting detection (Super signal West Femto Signal Fire agent of Thermo). β-actin was used as a housekeeping protein and loading control to confirm equal loading of protein to gels. Band intensities were analyzed by Carestream MI software (Carestream Health Inc., Rochester, NY, USA). Final quantitations were made by dividing the band intensities of target proteins to the band intensities of housekeeping protein β-actin. Data of specific protein levels are presented as fold changes relative to the control. The results were subjected to analysis of variance (ANOVA) followed by the Student Newman Keuls test to analyze differences between conditions. In each case, a p value of <0.05 was considered to be statistically significant. 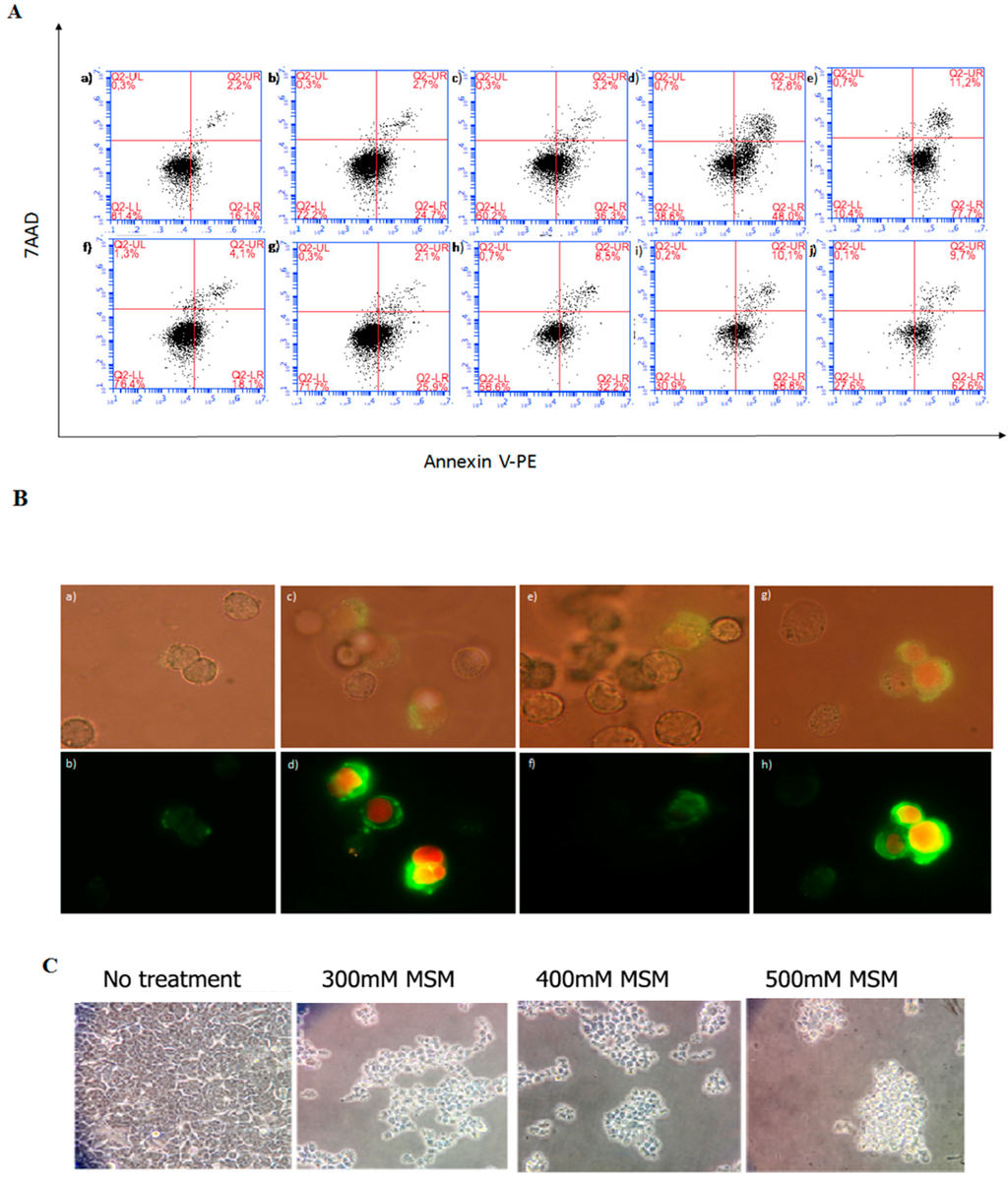 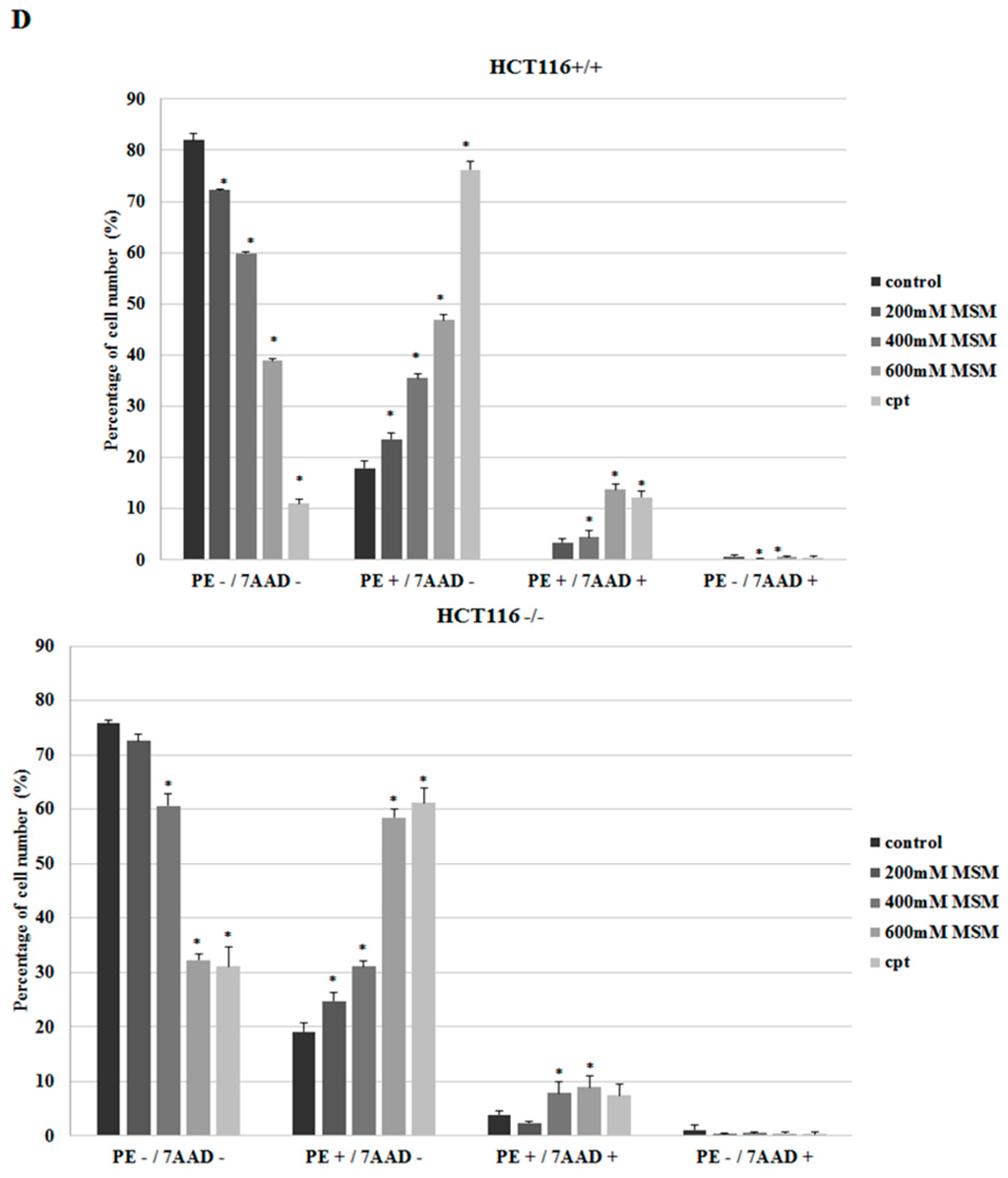 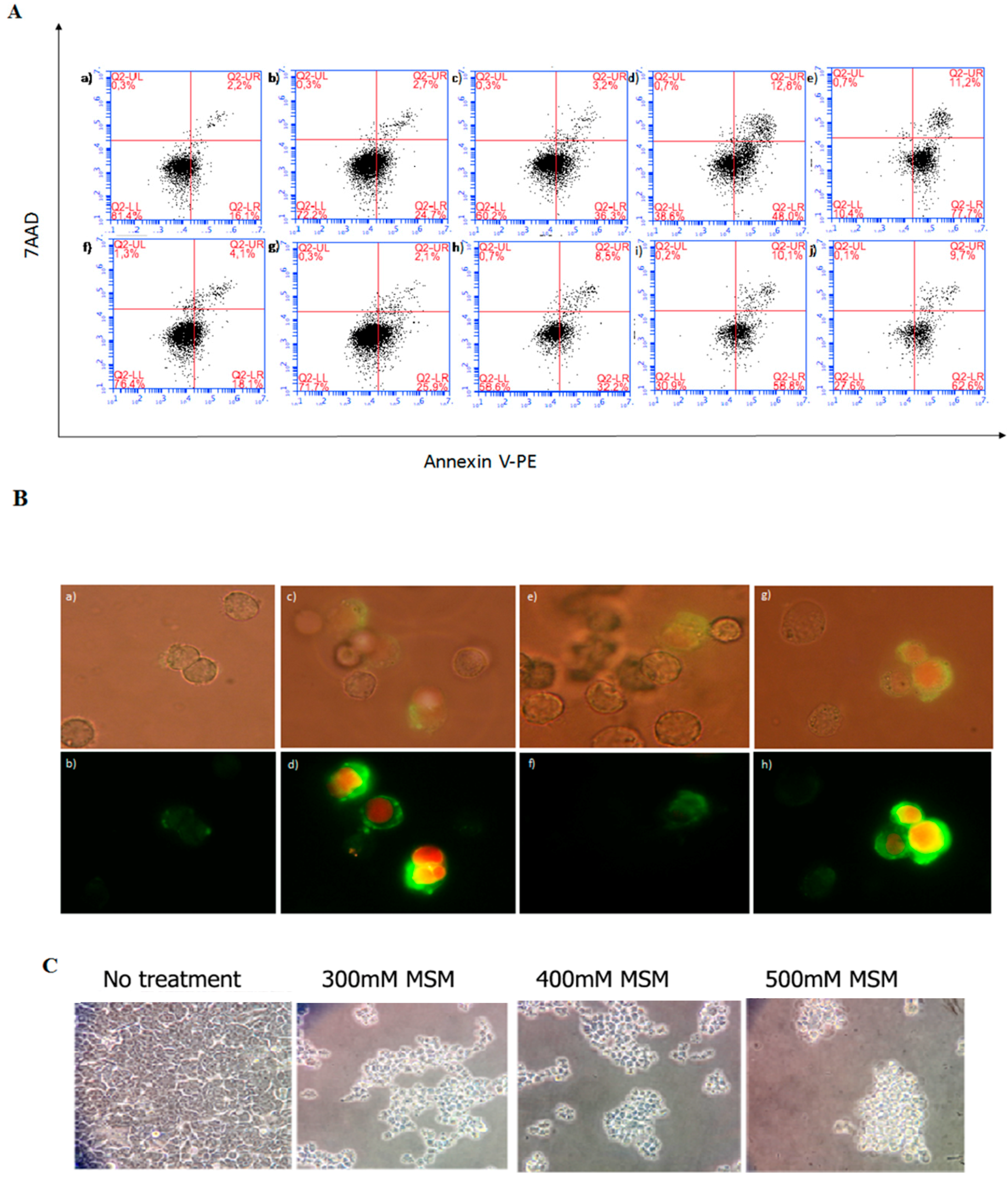 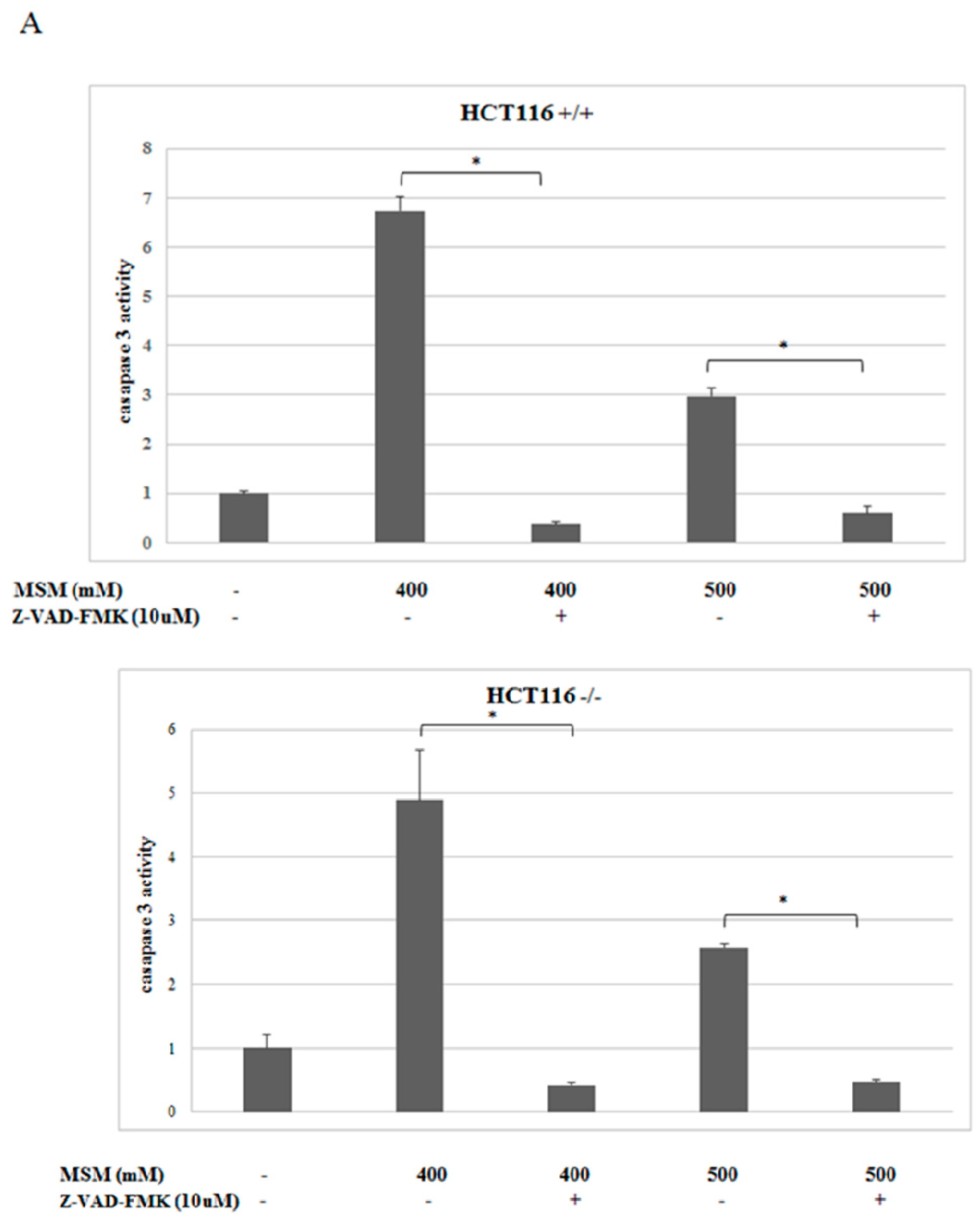 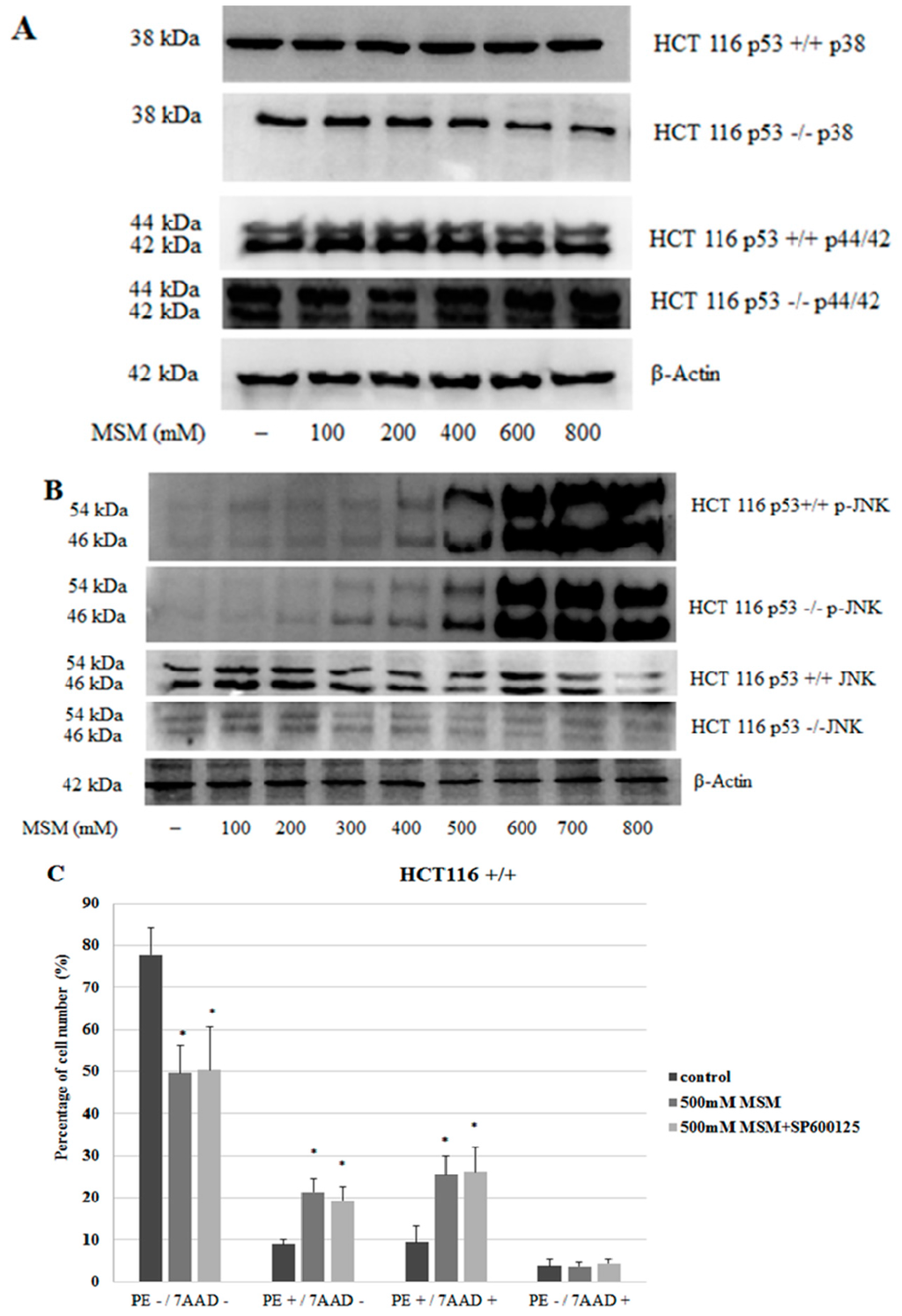 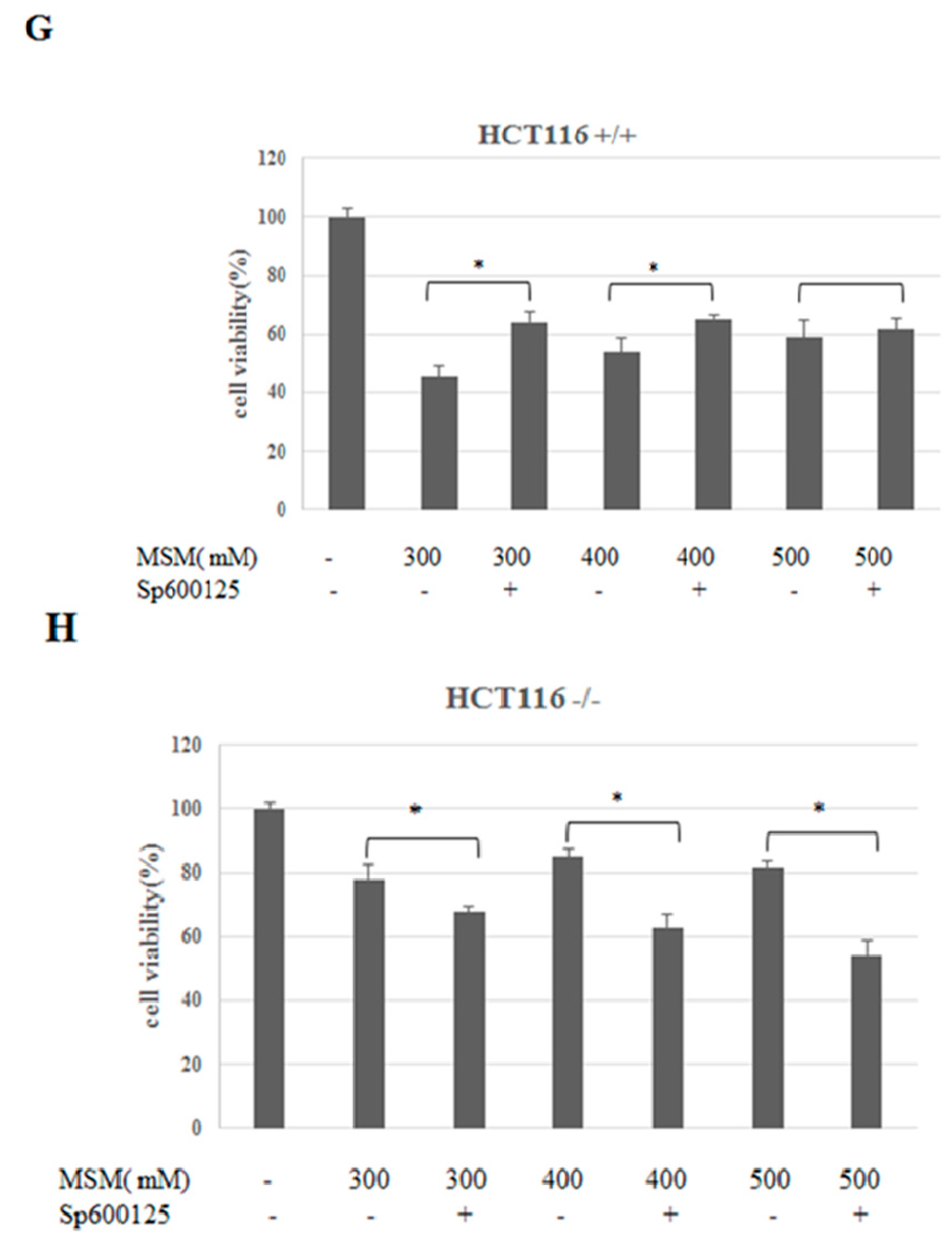 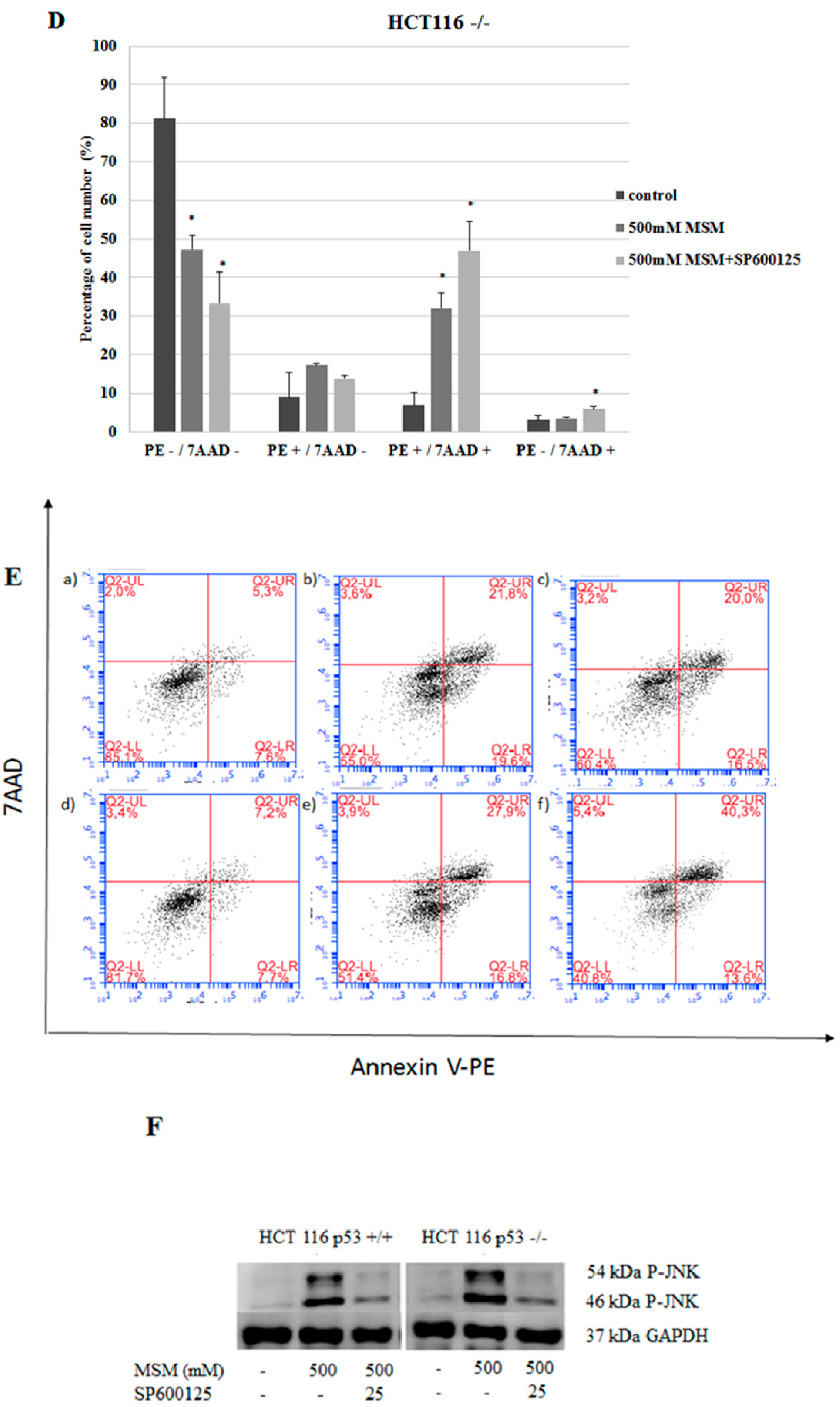 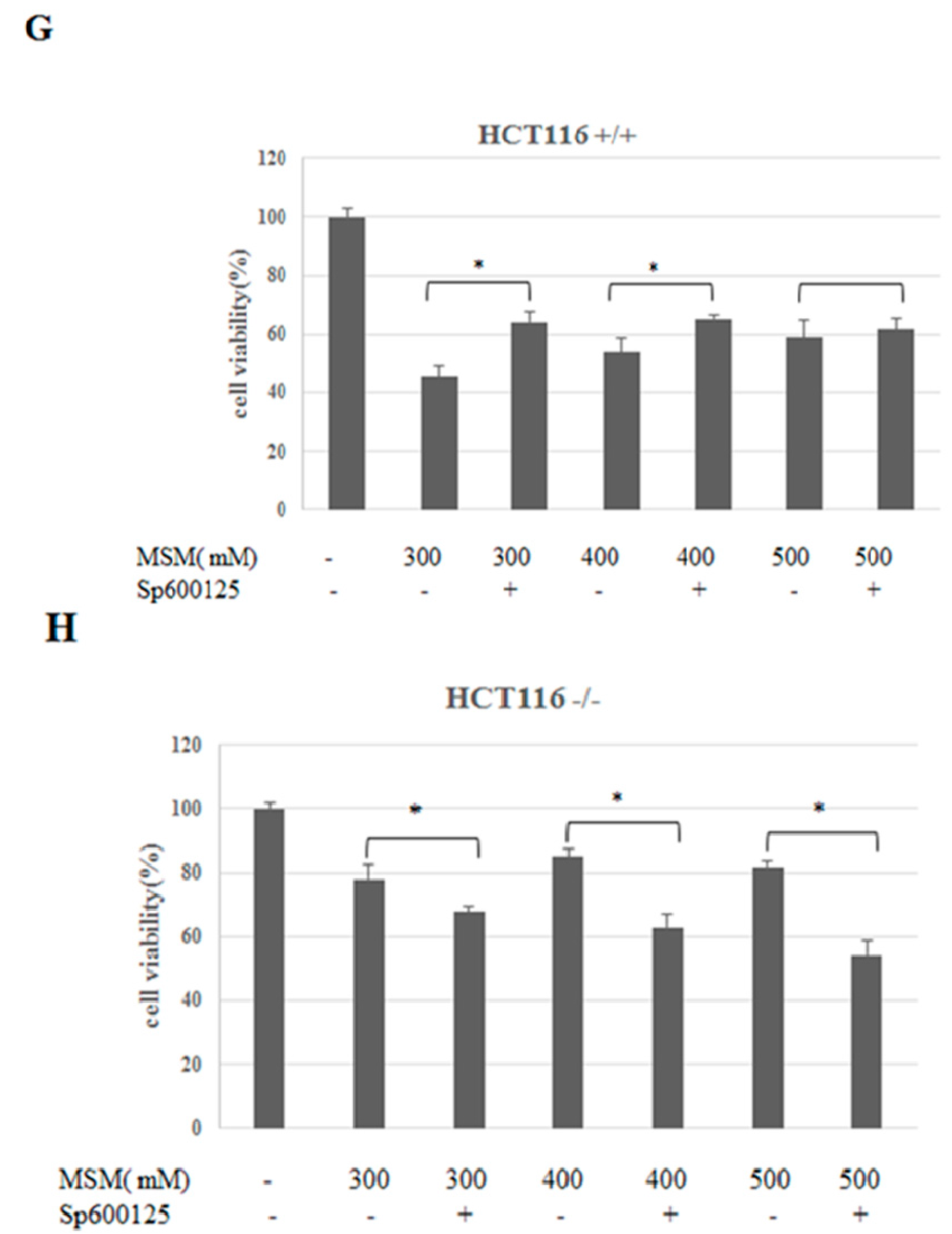 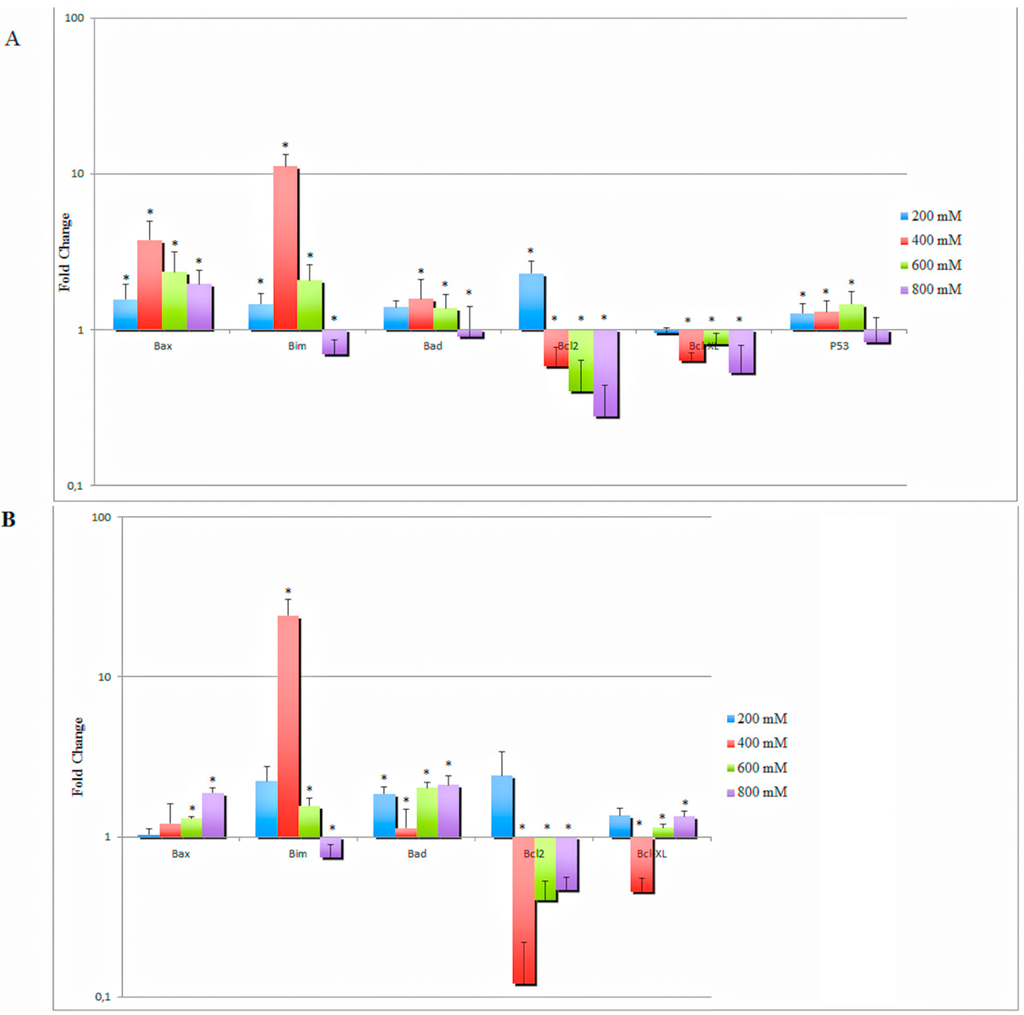 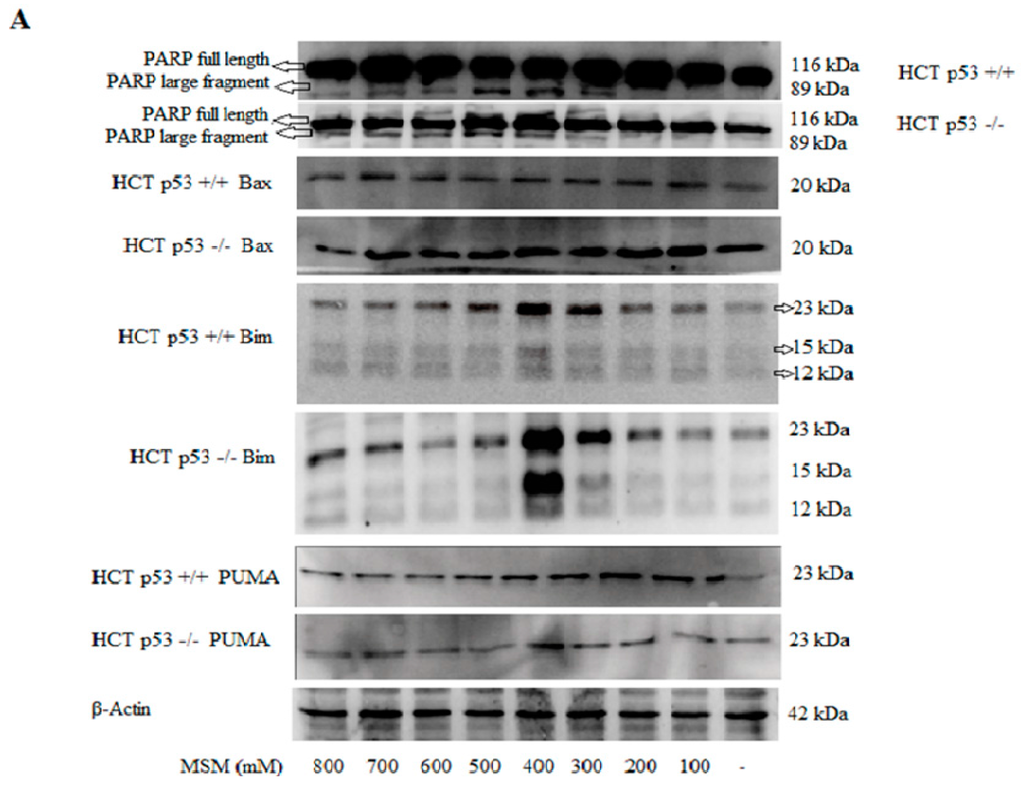 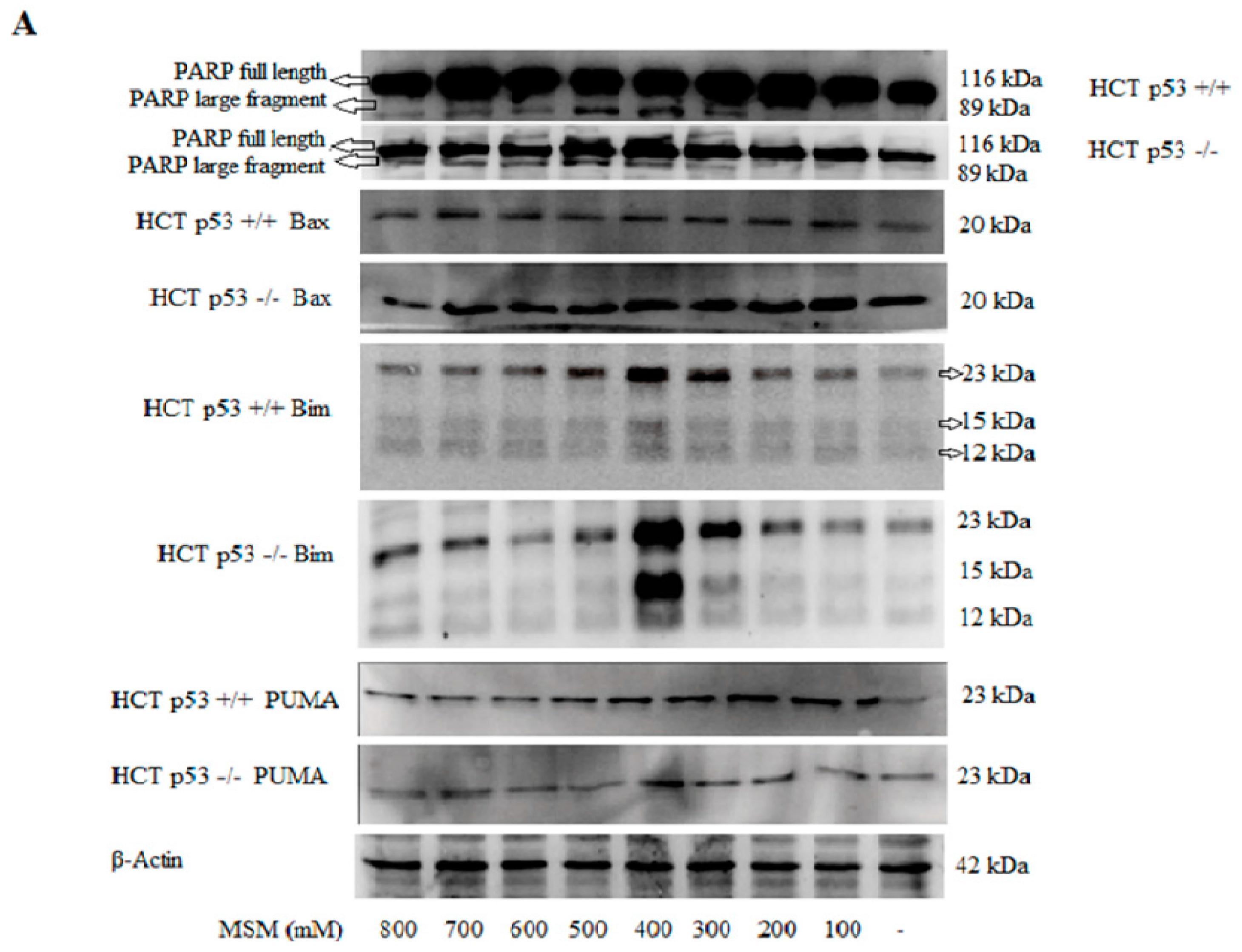