Human Saliva Collection Devices for Proteomics: An Update
Next Article in Special Issue

A genome-wide analysis identified the set of small RNAs (sRNAs) from the agronomical important legume Phaseolus vulgaris (common bean), including novel P. vulgaris-specific microRNAs (miRNAs) potentially important for the regulation of the rhizobia-symbiotic process. Generally, novel miRNAs are difficult to identify and study because they are very lowly expressed in a tissue- or cell-specific manner. In this work, we aimed to analyze sRNAs from common bean root hairs (RH), a single-cell model, induced with pure Rhizobium etli nodulation factors (NF), a unique type of signal molecule. The sequence analysis of samples from NF-induced and control libraries led to the identity of 132 mature miRNAs, including 63 novel miRNAs and 1984 phasiRNAs. From these, six miRNAs were significantly differentially expressed during NF induction, including one novel miRNA: miR-RH82. A parallel degradome analysis of the same samples revealed 29 targets potentially cleaved by novel miRNAs specifically in NF-induced RH samples; however, these novel miRNAs were not differentially accumulated in this tissue. This study reveals Phaseolus vulgaris-specific novel miRNA candidates and their corresponding targets that meet all criteria to be involved in the regulation of the early nodulation events, thus setting the basis for exploring miRNA-mediated improvement of the common bean–rhizobia symbiosis. View Full-Text
Keywords: common bean; legume-rhizobia interaction; miRNAs; phasiRNAs common bean; legume-rhizobia interaction; miRNAs; phasiRNAs
►▼ Show Figures 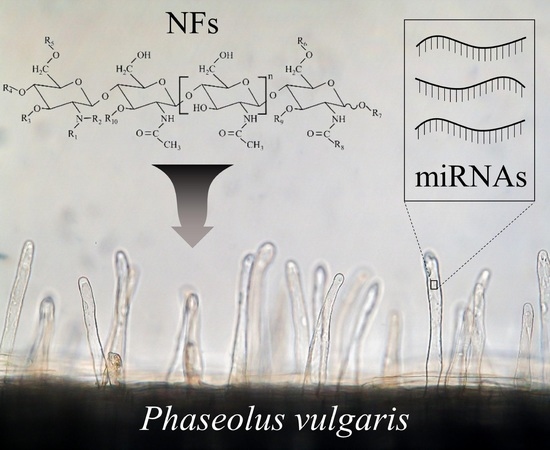