Ants cause a series of accidents involving humans. Such accidents generate different reactions in the body, ranging from a mild irritation at the bite site to anaphylactic shock, and these reactions depend on the mechanism of action of the venom. The study of animal venom is a science known as venomics. Through venomics, the composition of the venom of several ant species has already been characterized and their biological activities described. Thus, the aim of this study was to evaluate the protein composition and biological activities (hemolytic and immunostimulatory) of the venom of Neoponera villosa (N. villosa), an ant widely distributed in South America. The protein composition was evaluated by proteomic techniques, such as two-dimensional electrophoresis. To assess the biological activity, hemolysis assay was carried out and cytokines were quantified after exposure of macrophages to the venom. The venom of N. villosa has a profile composed of 145 proteins, including structural and metabolic components (e.g., tubulin and ATPase), allergenic and immunomodulatory proteins (arginine kinase and heat shock proteins (HSPs)), protective proteins of venom (superoxide dismutase (SOD) and catalase) and tissue degradation proteins (hyaluronidase and phospholipase A2). The venom was able to induce hemolysis in human erythrocytes and also induced release of both pro-inflammatory cytokines, as the anti-inflammatory cytokine release by murine macrophages. These results allow better understanding of the composition and complexity of N. villosa venom in the human body, as well as the possible mechanisms of action after the bite. View Full-Text
Keywords: ant; proteome; venomics; hemolysis; immunostimulatory proteins ant; proteome; venomics; hemolysis; immunostimulatory proteins
►▼ Show Figures 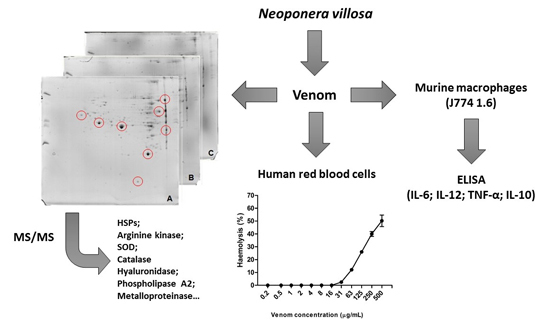