Oncostatic-Cytoprotective Effect of Melatonin and Other Bioactive Molecules: A Common Target in Mitochondrial Respiration

Expression of Nodal, a Transforming Growth Factor-beta (TGF-β) related growth factor, is associated with aggressive melanoma. Nodal expression in adult dysplastic nevi may predict the development of aggressive melanoma in some patients. A subset of pediatric patients diagnosed with giant or large congenital melanocytic nevi (LCMN) has shown increased risk for development of melanoma. Here, we investigate whether Nodal expression can help identify the rare cases of LCMN that develop melanoma and shed light on why the majority of these patients do not. Immunohistochemistry (IHC) staining results show varying degree of Nodal expression in pediatric dysplastic nevi and LCMN. Moreover, median scores from Nodal IHC expression analysis were not significantly different between these two groups. Additionally, none of the LCMN patients in this study developed melanoma, regardless of Nodal IHC levels. Co-culture experiments revealed reduced tumor growth and lower levels of Nodal and its signaling molecules P-SMAD2 and P-ERK1/2 when melanoma cells were grown in vivo or in vitro with normal melanocytes. The same was observed in melanoma cells cultured with melanocyte conditioned media containing pigmented melanocyte derived melanosomes (MDM). Since MDM contain molecules capable of inactivating radical oxygen species, to investigate potential anti-oxidant effect of MDM on Nodal expression and signaling in melanoma, melanoma cells were treated with either N-acetyl-l-cysteine (NAC), a component of the anti-oxidant glutathione or synthetic melanin, which in addition to providing pigmentation can also exert free radical scavenging activity. Melanoma cells treated with NAC or synthetic melanin showed reduced levels of Nodal, P-SMAD2 and P-ERK1/2 compared to untreated melanoma cells. Thus, the potential role for Nodal in melanoma development in LCMN is less evident than in adult dysplastic nevi possibly due to melanocyte cross-talk in LCMN capable of offsetting or delaying the pro-melanoma effects of Nodal via anti-oxidant effects of MDM. View Full-Text
Keywords: pediatric nevi; melanocytes; melanoma; melanosomes; anti-oxidants; Nodal pediatric nevi; melanocytes; melanoma; melanosomes; anti-oxidants; Nodal
►▼ Show Figures 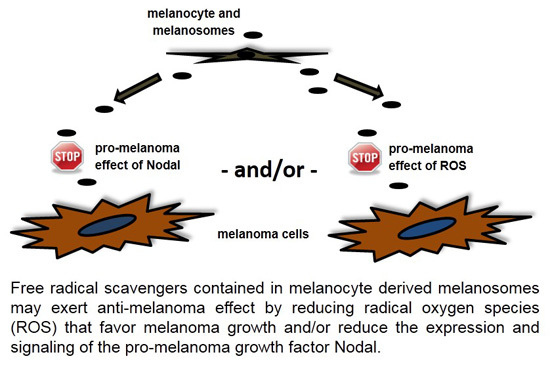