Tumor necrosis factor receptor-associated factor 2 (TRAF2) is a critical mediator of tumor necrosis factor-α (TNF-α) signaling. However, the regulatory mechanisms of TRAF2 are not fully understood. Here we show evidence that TRAF2 requires brefeldin A-inhibited guanine nucleotide-exchange factor 1 (BIG1) to be recruited into TNF receptor 1 (TNFR1) signaling complexes. In BIG1 knockdown cells, TNF-α-induced c-Jun N-terminal kinase (JNK) activation was attenuated and the sensitivity to TNF-α-induced apoptosis was increased. Since these trends correlated well with those of TRAF2 deficient cells as previously demonstrated, we tested whether BIG1 functions as an upstream regulator of TRAF2 in TNFR1 signaling. As expected, we found that knockdown of BIG1 suppressed TNF-α-dependent ubiquitination of TRAF2 that is required for JNK activation, and impaired the recruitment of TRAF2 to the TNFR1 signaling complex (complex I). Moreover, we found that the recruitment of TRAF2 to the death-inducing signaling complex termed complex II was also impaired in BIG1 knockdown cells. These results suggest that BIG1 is a key component of the machinery that drives TRAF2 to the signaling complexes formed after TNFR1 activation. Thus, our data demonstrate a novel and unexpected function of BIG1 that regulates TNFR1 signaling by targeting TRAF2. View Full-Text
Keywords: tumor necrosis factor-α (TNF-α); apoptosis; JNK; TRAF2; BIG1 tumor necrosis factor-α (TNF-α); apoptosis; JNK; TRAF2; BIG1
►▼ Show Figures 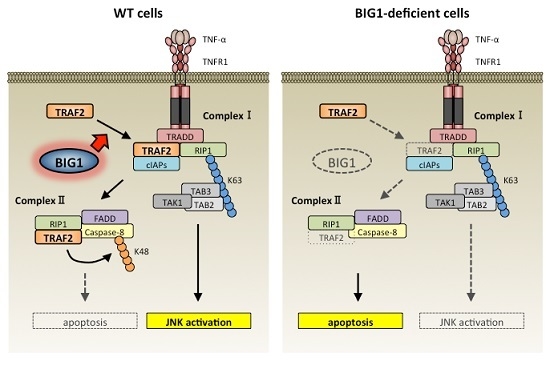