:
The kidney plays a primary role in maintaining homeostasis and detoxification of numerous hydrophilic xenobiotics as well as endogenous compounds. Because the kidney is exposed to a larger proportion and higher concentration of drugs and toxins than other organs through the secretion of ionic drugs by tubular organic ion transporters across the luminal membranes of renal tubular epithelial cells, and through the reabsorption of filtered toxins into the lumen of the tubule, these cells are at greater risk for injury. In fact, drug-induced kidney injury is a serious problem in clinical practice and accounts for roughly 20% of cases of acute kidney injury (AKI) among hospitalized patients. Therefore, its early detection is becoming more important. Usually, drug-induced AKI consists of two patterns of renal injury: acute tubular necrosis (ATN) and acute interstitial nephritis (AIN). Whereas AIN develops from medications that incite an allergic reaction, ATN develops from direct toxicity on tubular epithelial cells. Among several cellular mechanisms underlying ATN, oxidative stress plays an important role in progression to ATN by activation of inflammatory response via proinflammatory cytokine release and inflammatory cell accumulation in tissues. This review provides an overview of drugs associated with AKI, the role of oxidative stress in drug-induced AKI, and a biomarker for drug-induced AKI focusing on oxidative stress.
Keywords:
acute kidney injury; acute interstitial nephritis; acute tubular necrosis; oxidative stress; early biomaker; vanin-1

The kidney is an organ that performs a number of essential functions in the body: the clearance of endogenous waste products, the control of volume status, the maintenance of electrolyte and acid-base balance, and endocrine function. Especially, the metabolism and elimination of administered therapeutic and diagnostic agents as well as environmental exposures are major functions. The kidney is exposed to a larger proportion and higher concentration of drugs and toxins than other organs through the secretion of ionic drugs by tubular organic ion transporters across the luminal membranes of the tubule [1], and through the reabsorption of filtered toxins into the lumen of the tubule. Therefore, renal tubular epithelial cells are at greater risk for injury [2,3]. Indeed, drug-induced kidney injury is a serious problem in clinical practice and accounts for 19%–26% of cases with acute kidney injury (AKI) among hospitalized patients [4]. Moreover, AKI causes a severe condition associated with high probabilities of developing progressive chronic kidney disease or end-stage renal disease, thus leading to high mortality rates [5]. Currently, AKI is defined by the Acute Kidney Injury Network (AKIN) as an absolute increase in Scr levels of at least 0.3 mg/dL or a relative Scr increase of more than or equal to 50% within 48 h [6]. However, in some cases, this definition is not applied. For example, tacrolimus-induced AKI in liver transplant recipients is diagnosed by an increase in Scr level of 50% within a continuous 96 h, because the changes in Scr caused by tacrolimus is gradual and difficult to evaluate according to the AKIN criteria [7]. On the other hand, contrast-induced AKI is diagnosed by an early increase in Scr (within 12 h) [8].

AKI includes acute tubular necrosis (ATN) and acute interstitial nephritis (AIN). Table 1 shows commonly prescribed drugs which are known to cause AKI, which is due to ATN or AIN.
As for ATN, the renal proximal tubule is commonly damaged by several drugs such as cisplatin [9], aminoglycosides (gentamycin, kanamycin, streptomycin, and tobramycin) [41], amphotericin B [18], antiviral agents (adefovir, cidofovir, and tenofovir) [20], radiocontrast [21], and bisphosphonate [25]. Pathologic characteristics are severe tubular injury including luminal ectasia, marked cytoplasmic simplification, cytoplasmic eosinophilia, loss of brush border, and dropout of tubular epithelia.
AIN is another common cause of AKI. In patients with AKI, approximately 15% are proven to be due to AIN by biopsy [42]. AIN represents an abundant immune response to an exogenously administered medication or toxins. Pathologic characteristic is a diffuse infiltration of lymphocytes, monocytes, plasma cells, and eosinophils into the interstitial compartment. Occasional focus of tubulitis is observed. Many studies show that there is no correlation between the type of offending drug and the histologic findings [43,44]. Generally, renal manifestations of AIN occur with an average delay of approximately ten days [45]. Extrarenal manifestations that indicate a systemic reaction, such as skin eruptions, eosinophilia, and fever, also may occur. Among drugs responsible for AIN, antibiotic agents are most common; however, nonsteroidal anti-inflammatory drugs (NSAIDs) and proton pump inhibitors (PPIs) are also offenders. Recently, PPIs have become one of the most common causes of AIN [46]. In a large nested cohort study, the unadjusted odds ratio for AIN was 5.16 for current versus past PPI use [47]. This effect was obvious in the elderly. This is because of an increased susceptibility in the aging kidney, and because of a higher intake of medications in these patients. Of note, when comparing antibiotic-AIN with PPI-AIN in the elderly, those with antibiotic-AIN exhibited more severe AKI at the time of biopsy [47].

In the setting of ATN, the renal proximal tubular epithelium undergoes a complex series of events involving a temporal progression through the loss of polarity and cytoskeletal integrity, necrosis, and apoptosis [48,49,50,51]. Subsequently, necrosis induces inflammation. Necrotic cells release danger-associated molecular patterns (DAMPs) and alarmins from several intracellular compartments. DAMPs are molecules with other proinflammatory functions under normal conditions that turn into danger signals only once being released by cell death and by alerting the innate immune system via a group of pattern recognition receptors (PRRs) on the surface or inside other cells. By contrast, alarmins are a heterogeneous group of preformed proinflammatory molecules that are released by cell death from stores inside the cell [52,53]. The release of DAMPs and alarmins induces inflammation, which implies the recruitment of cytokine-producing leukocytes into the peritubular interstitium. Inflammation accelerates tubular injury [54] and involves potential triggers of necroptosis such as TNF-α [55]. In turn, TNF-α and other cytokines drive necroptosis as a secondary cell death category contributing to tubular necrosis and renal dysfunction. This sets up the auto-amplification loop of necroinflammation [56].
Another mechanism underlying ATN is oxidative stress. Proximal tubular toxicity develops due to direct nephrotoxic effects such as mitochondrial dysfunction, lysosomal hydrolase inhibition, phospholipid damage, and increased intracellular calcium concentration, leading to formation of reactive oxygen species (ROS) with injurious oxidative stress. For example, cisplatin, which induces ATN, invokes oxidative stress, and its pathological conditions under which ROS generates are associated with three mechanisms. First, cisplatin is actuated into a highly reactive form, which can rapidly react with thiol-containing molecules including glutathione (GSH), a well-recognized cellular antioxidant [57,58]. The depletion or inactivation of GSH and related antioxidants leads to the accumulation of endogenous ROS within the cells. It activates signaling pathways, mitogen-activated protein kinase (MAPK), P53 and possibly P21, leading to renal tubular cell death. Subsequently, ROS contribute to the fibrotic process either directly or indirectly via enhanced inflammation. Fibrosis and inflammation itself might feedback to the pathway and further increase ROS formation or stimulate the production of cytokines and growth factors. Second, cisplatin may induce mitochondrial dysfunction and increase ROS production via its disrupted respiratory chain [59]. The role of mitochondrial production of ROS in cisplatin-induced renal injury was further indicated by the cytoprotective effects of mitochondria-localized manganese superoxide dismutase [60]. Interestingly, in the same study, expression of catalase in mitochondria did not have significant protective effects, suggesting that superoxide, and not hydrogen peroxide, may be the major injurious oxidant species generated by mitochondria. Finally, cisplatin may induce ROS formation in the microsomes via the cytochrome P450 (CYP) enzymes. In CYP2E1-null mice, cisplatin-induced ROS accumulation was attenuated, as was renal injury [61]. Similarly, aminoglycosides-induced AKI is involved in oxidative stress. Accumulation of high concentrations within lysosomes and release into the cell cytoplasm promotes phospholipid membrane interruption, oxidative stress, and mitochondrial injury, which cause proximal tubular cell apoptosis and necrosis, leading to AKI.
The mechanism underlying AIN is not completely understood. AIN represents an exuberant host immune response to an exogeneously administered medication or toxin. A proposed mechanism is that absorption of various plasma proteins and molecules by tubular cells causes secretion of chemotactic and inflammatory mediators in the interstitium. It has been reported that nuclear factor-kappa B (NF-κB), a protein complex that regulates DNA transcription and upregulates inflammatory mediators, is overexpressed in the kidneys of proteinuric animals [62,63,64,65]. Increased trafficking of protein has been seen to upregulate RANTES (regulated on activation normal T cell expressed and secreted) production which is a chemoattractant molecule stimulated by NF-κB [66]. The inhibition of NF-κB has been shown to reduce cortical tubulointerstitial injury in rat models [67].

4. Oxidative Stress and Vanin-1 as a Potential Biomarker for Drug-Induced ATN

Urinary vanin-1 could be a useful biomarker for the detection of drug-induced ATN focusing on oxidative stress. On the other hand, vanin-1 remains to be tested for drugs causing AIN. In addition, there are other mechanisms of drug-induced AKI. Further studies are needed to exploit more favorable biomarkers for drug-induced AKI.

This work was supported in part by a Grant-in-Aid for Scientific Research (C) from the Ministry of Education, Culture, Sports, Science and Technology of Japan (26460631 to Keiko Hosohata) and by the Japan Research Foundation for Clinical Pharmacology.

The author declares no conflict of interest. The founding sponsors had no role in the design of the study; in the collection, analyses, or interpretation of data; in the writing of the manuscript, or in the decision to publish the results. 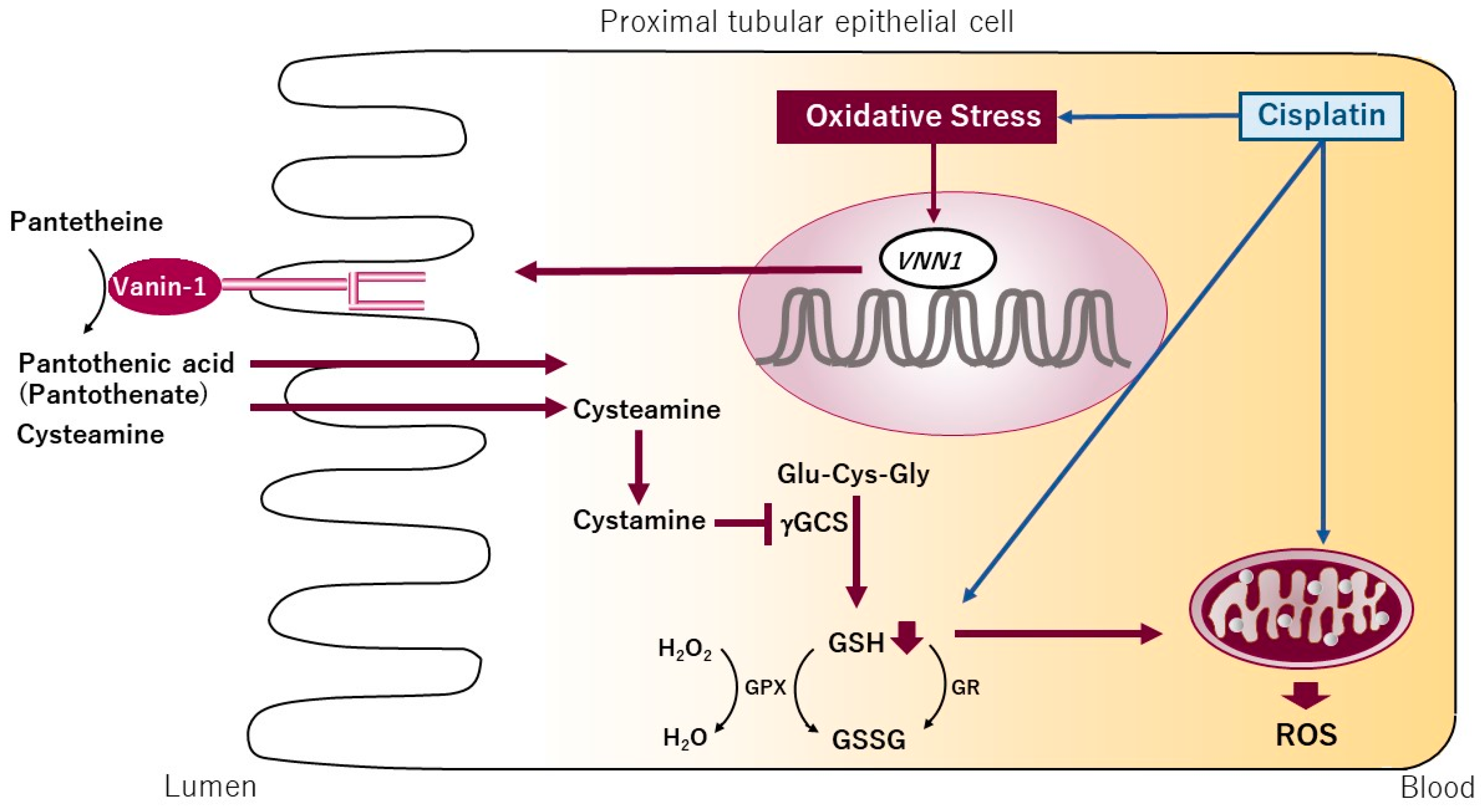