The Molecular Pathway of Argon-Mediated Neuroprotection

Hericium erinaceus, an edible and medicinal mushroom, displays various pharmacological activities in the prevention of dementia in conditions such as Parkinson’s and Alzheimer’s disease. The present study explored the neuroprotective effects of H. erinaceus mycelium polysaccharide-enriched aqueous extract (HE) on an l-glutamic acid (l-Glu)-induced differentiated PC12 (DPC12) cellular apoptosis model and an AlCl3 combined with d-galactose-induced Alzheimer’s disease mouse model. The data revealed that HE successfully induced PC12 cell differentiation. A 3 h HE incubation at doses of 50 and 100 µg/mL before 25 mM of l-Glu effectively reversed the reduction of cell viability and the enhancement of the nuclear apoptosis rate in DPC12 cells. Compared with l-Glu-damaged cells, in PC12 cells, HE suppressed intracellular reactive oxygen species accumulation, blocked Ca2+ overload and prevented mitochondrial membrane potential (MMP) depolarization. In the Alzheimer’s disease mouse model, HE administration enhanced the horizontal and vertical movements in the autonomic activity test, improved the endurance time in the rotarod test, and decreased the escape latency time in the water maze test. It also improved the central cholinergic system function in the Alzheimer’s mice, demonstrated by the fact that it dose-dependently enhanced the acetylcholine (Ach) and choline acetyltransferase (ChAT) concentrations in both the serum and the hypothalamus. Our findings provide experimental evidence that HE may provide neuroprotective candidates for treating or preventing neurodegenerative diseases. View Full-Text
Keywords: Hericium erinaceus; neuro-protection; glutamate; mitochondria; Alzheimer‘s disease mouse Hericium erinaceus; neuro-protection; glutamate; mitochondria; Alzheimer‘s disease mouse
►▼ Show Figures 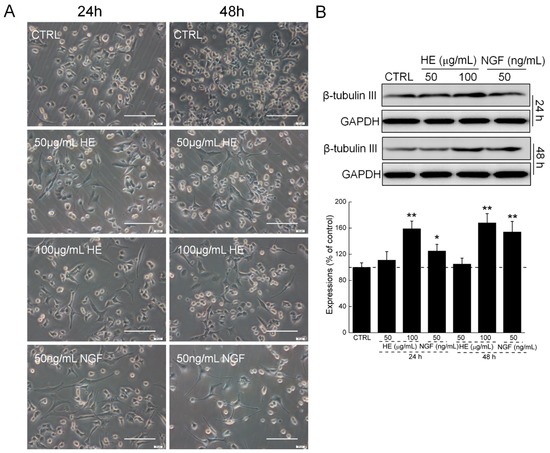