From Genome to Structure and Back Again: A Family Portrait of the Transcarbamylases
Previous Article in Special Issue

Parkinson’s disease (PD) is a progressive neurodegenerative disease affecting the nigrostriatal pathway, where patients do not manifest motor symptoms until >50% of neurons are lost. Thus, it is of great importance to determine early neuronal changes that may contribute to disease progression. Recent attention has focused on lipids and their role in pro- and anti-apoptotic processes. However, information regarding the lipid alterations in animal models of PD is lacking. In this study, we utilized high performance liquid chromatography electrospray ionization tandem mass spectrometry (HPLC-ESI-MS/MS) and novel HPLC solvent methodology to profile phosphatidylcholines and sphingolipids within the substantia nigra. The ipsilateral substantia nigra pars compacta was collected from rats 21 days after an infusion of 6-hydroxydopamine (6-OHDA), or vehicle into the anterior dorsal striatum. We identified 115 lipid species from their mass/charge ratio using the LMAPS Lipid MS Predict Database. Of these, 19 lipid species (from phosphatidylcholine and lysophosphotidylcholine lipid classes) were significantly altered by 6-OHDA, with most being down-regulated. The two lipid species that were up-regulated were LPC (16:0) and LPC (18:1), which are important for neuroinflammatory signalling. These findings provide a first step in the characterization of lipid changes in early stages of PD-like pathology and could provide novel targets for early interventions in PD. View Full-Text
Keywords: lipidomic profile; Parkinson’s disease; early stage model; 6-hydroxydopamine; HPLC-ESI-MS/MS lipidomic profile; Parkinson’s disease; early stage model; 6-hydroxydopamine; HPLC-ESI-MS/MS
►▼ Show Figures 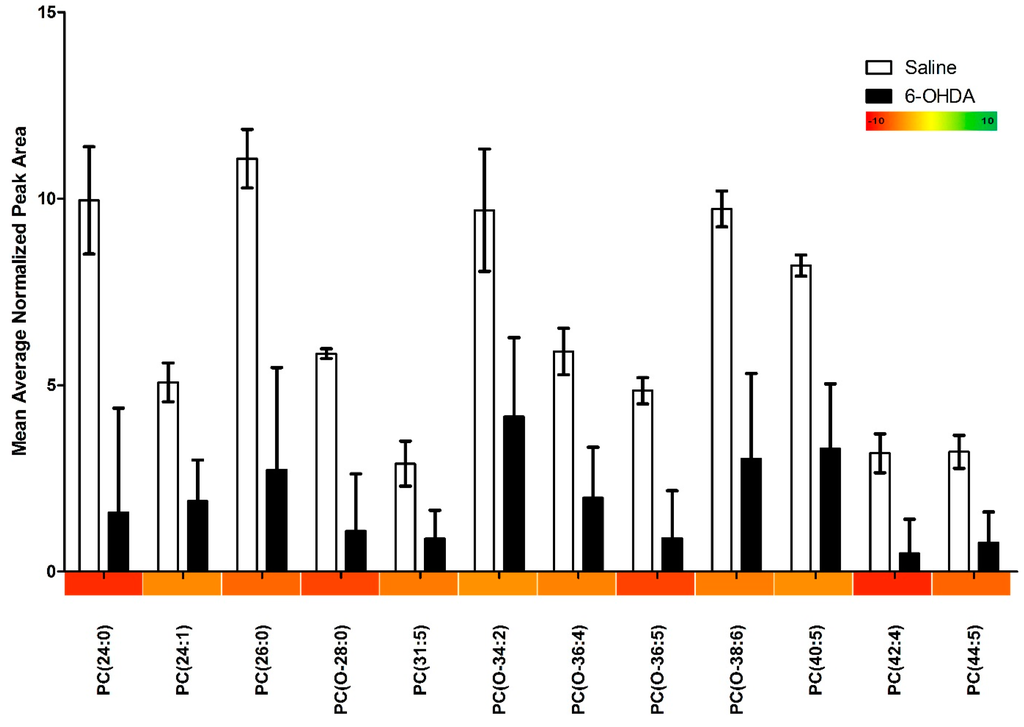