BtuCD–BtuF from Escherichia coli is a binding protein-dependent adenosine triphosphate (ATP)-binding cassette (ABC) transporter system that uses the energy of ATP hydrolysis to transmit vitamin B12 across cellular membranes. Experimental studies have showed that during the transport cycle, the transporter undergoes conformational transitions between the “inward-facing” and “outward-facing” states, which results in the open–closed motions of the cytoplasmic gate of the transport channel. The opening–closing of the channel gate play critical roles for the function of the transporter, which enables the substrate vitamin B12 to be translocated into the cell. In the present work, the extent of opening of the cytoplasmic gate was chosen as a function-related internal coordinate. Then the mean-square fluctuation of the internal coordinate, as well as the cross-correlation between the displacement of the internal coordinate and the movement of each residue in the protein, were calculated based on the normal mode analysis of the elastic network model to analyze the function-related motions encoded in the structure of the system. In addition, the key residues important for the functional motions of the transporter were predicted by using a perturbation method. In order to facilitate the calculations, the internal coordinate was introduced as one of the axes of the coordinate space and the conventional Cartesian coordinate space was transformed into the internal/Cartesian space with linear approximation. All the calculations were carried out in this internal/Cartesian space. Our method can successfully identify the functional motions and key residues for the transporter BtuCD–BtuF, which are well consistent with the experimental observations. View Full-Text
Keywords: ABC transporter; BtuCD–BtuF; functional motions; key residues; elastic network model; internal coordinate; normal mode analysis; perturbation method ABC transporter; BtuCD–BtuF; functional motions; key residues; elastic network model; internal coordinate; normal mode analysis; perturbation method
►▼ Show Figures 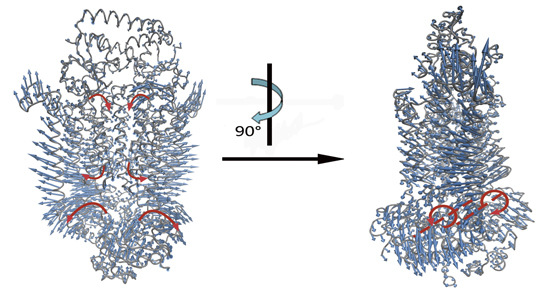