Oxidative stress is known as a major contributor to endothelial dysfunction and one of the main causes of tissue damage in the endothelium [1]. Endothelial dysfunction is a key precursor to the development of vascular disease [2]. Oxidative stress induces expression of phase II-detoxifying and antioxidant enzymes [3], which are involved in the preservation of the cellular redox homeostasis and the elimination of toxic xenobiotics [4]. Heme oxygenase-1 (HO-1), a well-known phase II enzyme, is a cytoprotective, rate-limiting enzyme involved in heme degradation [5]. Upregulation of HO-1 expression plays an important role in the preservation of homeostasis in the face of oxidative damage, and it has been therapeutically implicated in various disorders [6].
Several studies have shown that the intake of polyphenols present in vegetables and fruits induces health benefits in humans. Flavonoids are polyphenolic compounds that are regularly consumed via the human diet; These compounds have known biological effects such as in the prevention of various disorders, including cardiovascular disease, due to their anti-inflammatory and antioxidant properties [7,8,9]. Furthermore, they can regulate several cell signaling pathways and stimulate the expression of phase II enzymes [10].
Eriodictyol is a flavonoid that is distributed in common fruits and vegetables, especially citrus fruits such as lemon [11,12]. It exhibits beneficial biological properties, including antioxidant and anti-inflammatory effects [13,14]. The structural differences of flavonoids such as the hydroxyl patterns of A- and B-rings and of the presence 2,3-unsaturationin conjugation with a 4-oxo group in the C-ring affect their beneficial biological properties [15]. The radical scavenging activities associated with the structure of eriodictyol protect against oxidative stress (Figure 1) [16]. Supplementation of the diet with lemon-derived flavonoids significantly suppresses oxidative stress in the liver, serum, and kidney of diabetic rats [17]. Recent studies have shown that eriodictyol prevents early retinal and plasma abnormalities and defends retinal cells against oxidative damage in diabetic rats [16,18,19]. Furthermore, several studies have indicated that eriodictyol has immunomodulatory effects, including inhibition of nitric oxide (NO) production by blockage of NF-κB activation as well as mitogen-activated protein kinase (MAPK) phosphorylation in macrophages and pro-inflammatory cytokine production through p38 MAPK, extracellular signal-regulated kinase (ERK)-, c-Jun N-terminal kinase (JNK)-, cyclooxygenase-2 (COX-2)-, and cluster of differentiation 14 (CD14)-dependent signaling pathways [20,21]. Moreover, eriodictyol has been shown to exhibit protective effects against oxidative toxicity in neuron-like cells [22]. However, the detailed molecular mechanism and effect of HO-1 upregulation in eriodictyol-stimulated endothelial cells have not been investigated. 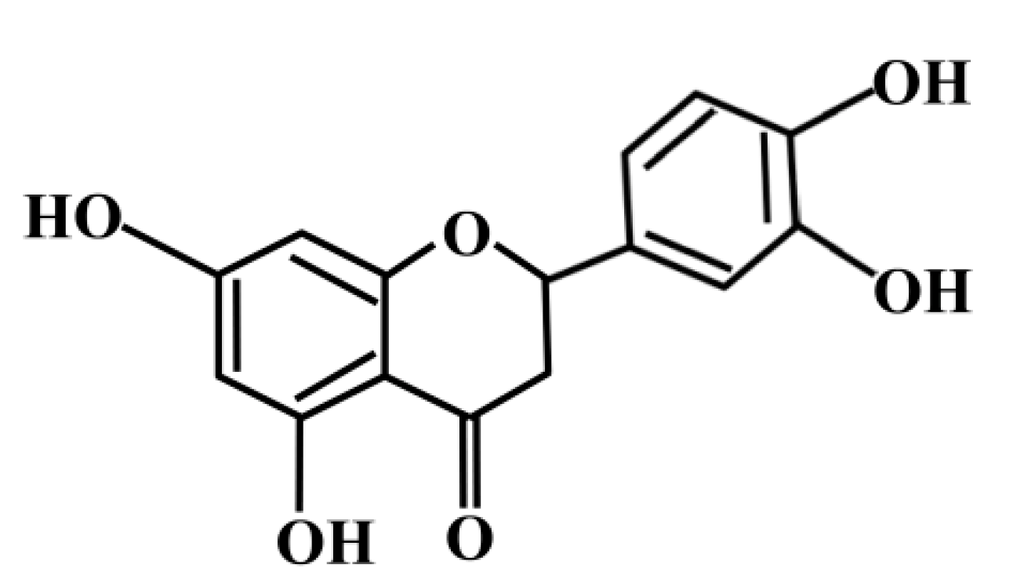 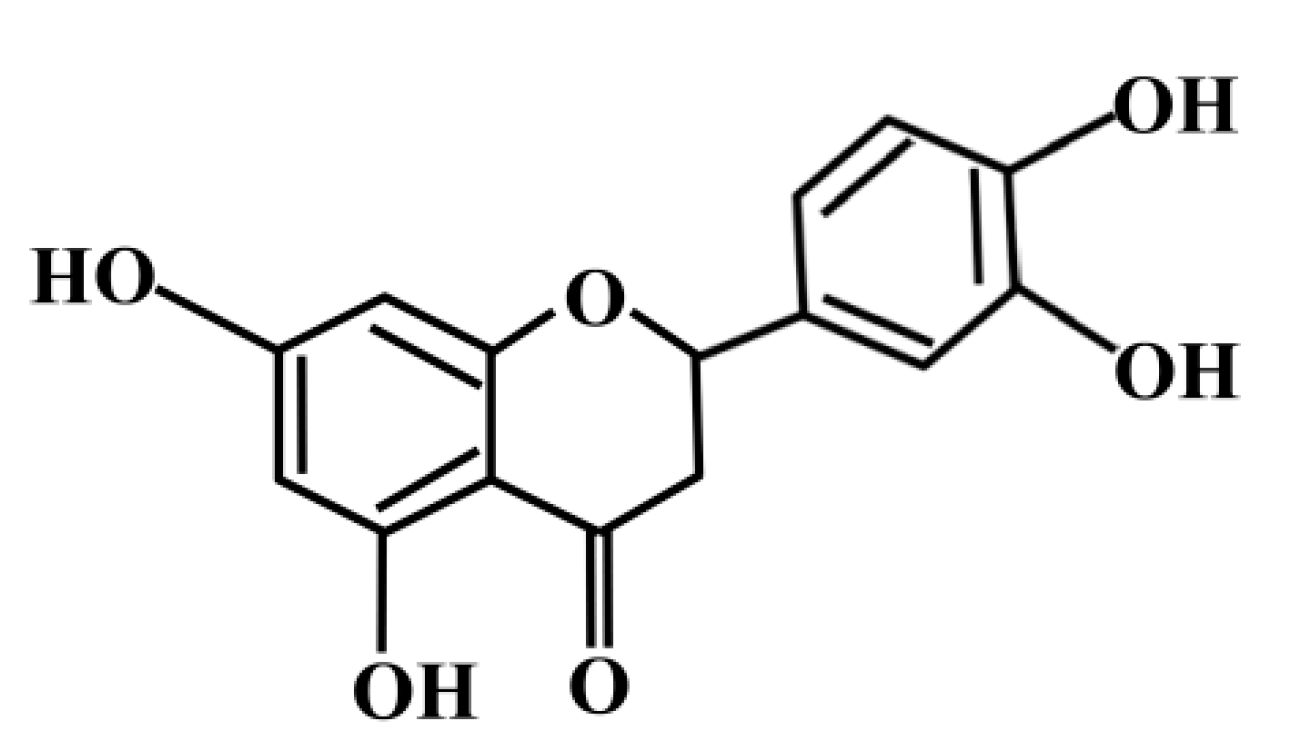 In this study, we explored the possible cytoprotective effect of eriodictyol through ERK/Nrf2/ARE-mediated HO-1 upregulation in human endothelial cells. 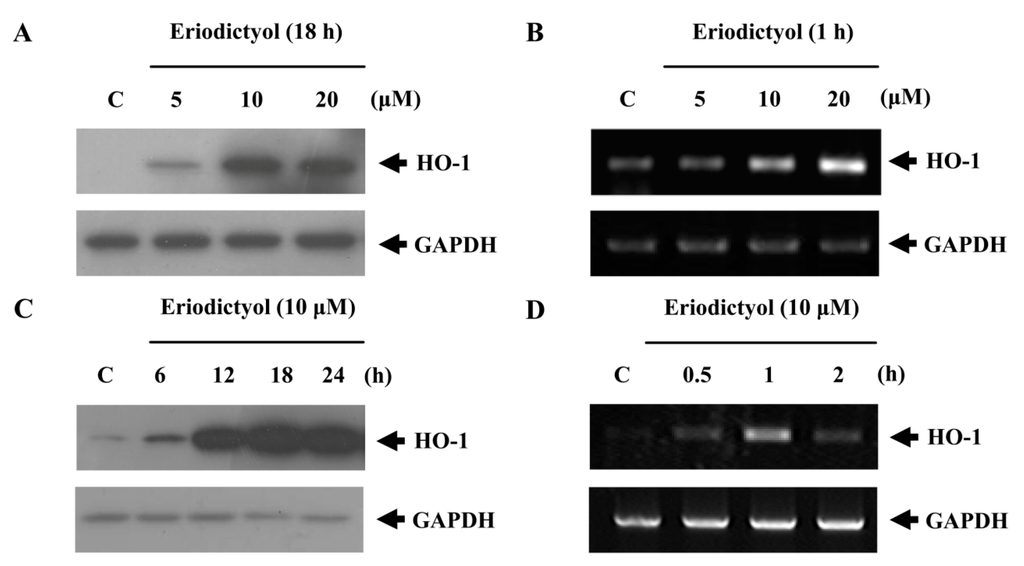 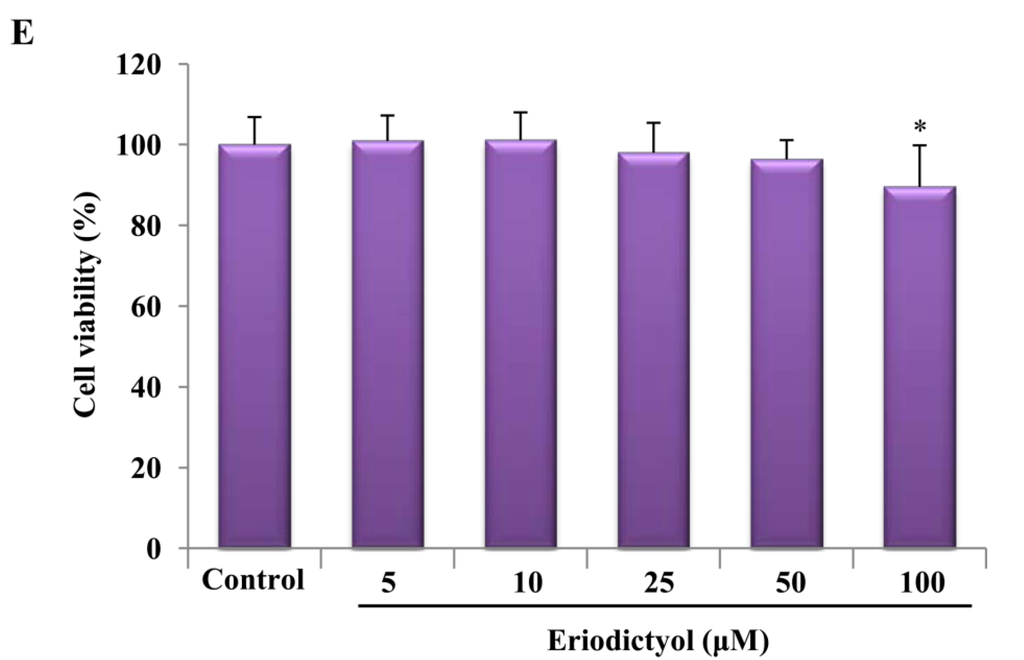 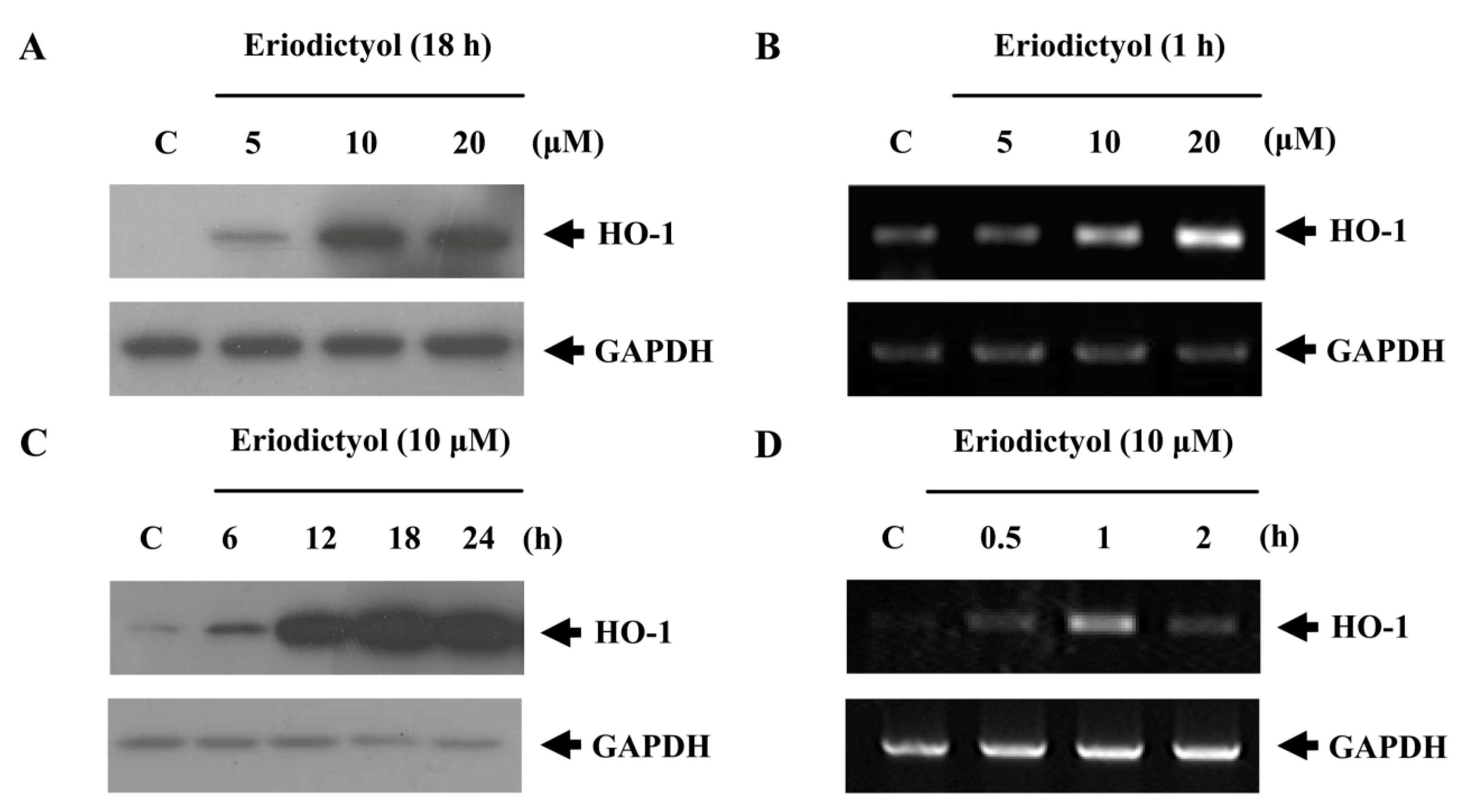 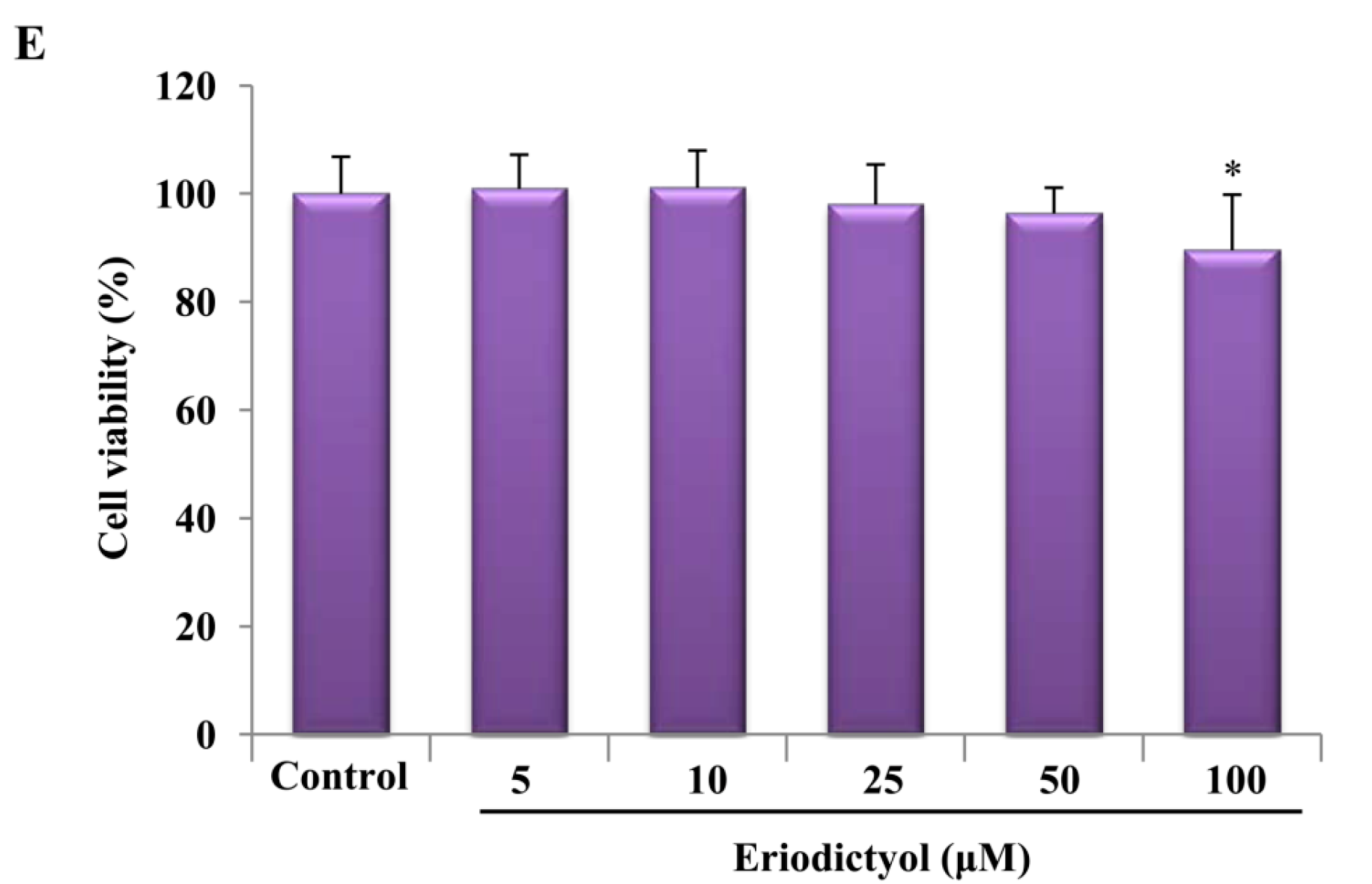 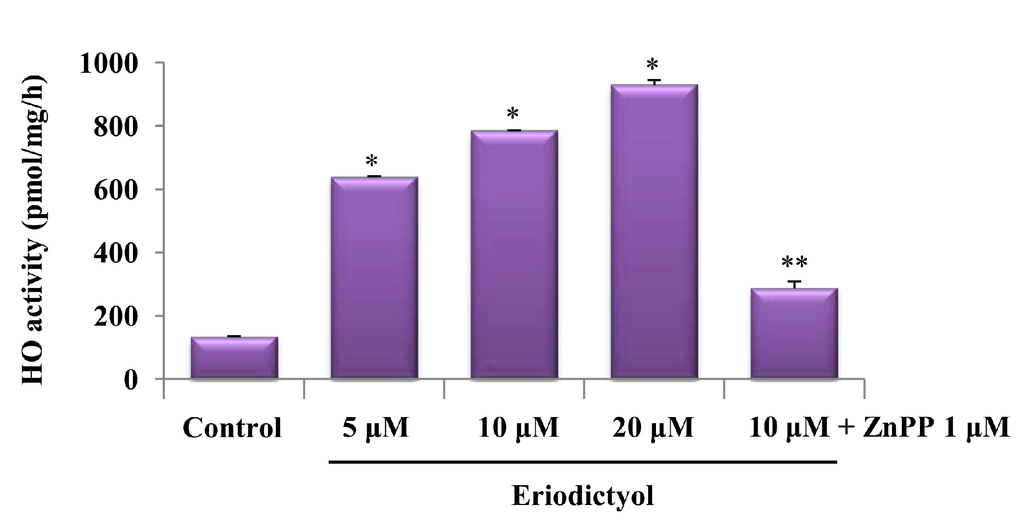 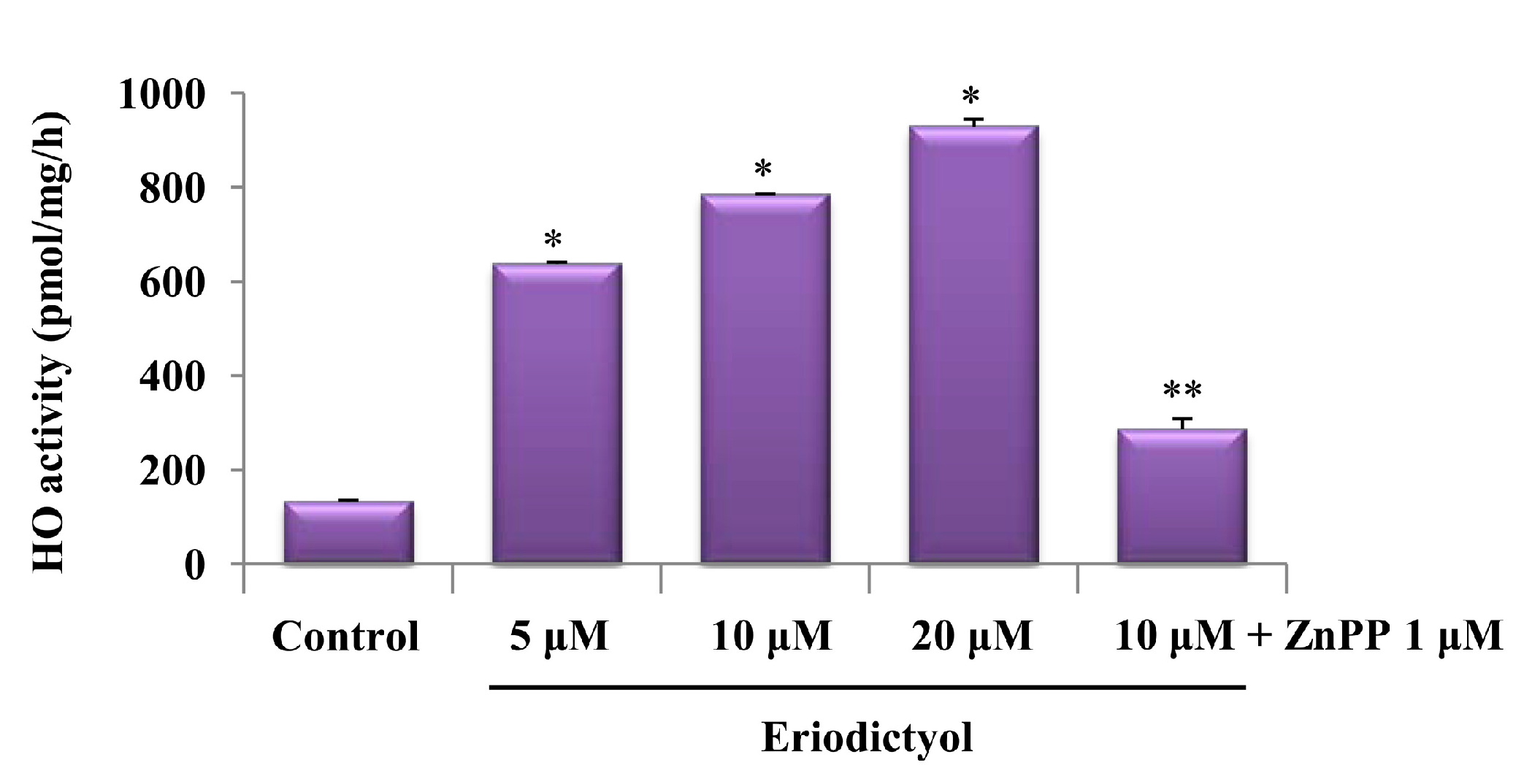 Figure 4. Blockage of eriodictyol-induced HO-1 protein expression by an ERK inhibitor. (A) Cells were pre-treated with increasing doses of PD 98059 (an ERK inhibitor) for 1 h prior to the treatment of eriodictyol 10 μM; (B) cell lysates were immunoblotted with antibodies against the phosphorylated form of ERK1/2 and total ERK; and (C) transient transfection of cells with increasing doses of ERK siRNA (20 and 30 nM) inhibited the induction of HO-1 protein expression by eriodictyol 10 μM. Western blots representative of three independent experiments are shown: C, untreated cells; +, treated with eriodictyol only; black line, treated with 10 µM eridictyol;

, dose increasing.
Figure 4. Blockage of eriodictyol-induced HO-1 protein expression by an ERK inhibitor. (A) Cells were pre-treated with increasing doses of PD 98059 (an ERK inhibitor) for 1 h prior to the treatment of eriodictyol 10 μM; (B) cell lysates were immunoblotted with antibodies against the phosphorylated form of ERK1/2 and total ERK; and (C) transient transfection of cells with increasing doses of ERK siRNA (20 and 30 nM) inhibited the induction of HO-1 protein expression by eriodictyol 10 μM. Western blots representative of three independent experiments are shown: C, untreated cells; +, treated with eriodictyol only; black line, treated with 10 µM eridictyol;

Phase II antioxidant and detoxifying enzymes such as HO-1, are modulated by the Nrf2/Keap1 transcription factor system, which binds to the ARE in the nucleus [25]. Therefore, we observed whether eriodictyol could trigger Nrf2 nuclear translocation in association with the upregulation of HO-1. Treatment with eriodictyol showed an increase in the nuclear levels of Nrf2 (Figure 5A). We also determined the effect of knockdown of Nrf2 through siRNA transfection on eriodictyol-stimulated HO-1 expression. After silencing with Nrf2 siRNA, Nrf2 proteins were reduced in total cell lysates (data not shown), and the eriodictyol-stimulated enhancement of HO-1 was eliminated (Figure 5B), indicating that eriodictyol-stimulated HO-1 upregulation requires the activation of Nrf2.

Figure 5. Nrf2 nuclear translocation induced by eriodictyol. (A) Cells were treated with 10 and 20 μM eriodictyol at the indicated concentrations for 4 h. Nuclear extracts were subjected to Western blot, using an anti-Nrf2 antibody and anti-lamin B antibody (a marker of nuclear protein); and (B) Transient transfection of cells with increasing doses of Nrf2-specific siRNA (10 and 20 nM) reduced HO-1 expression. Western blots representative of three independent experiments are shown: C, untreated cells; +, eriodictyol treatment only;

, dose increasing.
Figure 5. Nrf2 nuclear translocation induced by eriodictyol. (A) Cells were treated with 10 and 20 μM eriodictyol at the indicated concentrations for 4 h. Nuclear extracts were subjected to Western blot, using an anti-Nrf2 antibody and anti-lamin B antibody (a marker of nuclear protein); and (B) Transient transfection of cells with increasing doses of Nrf2-specific siRNA (10 and 20 nM) reduced HO-1 expression. Western blots representative of three independent experiments are shown: C, untreated cells; +, eriodictyol treatment only; 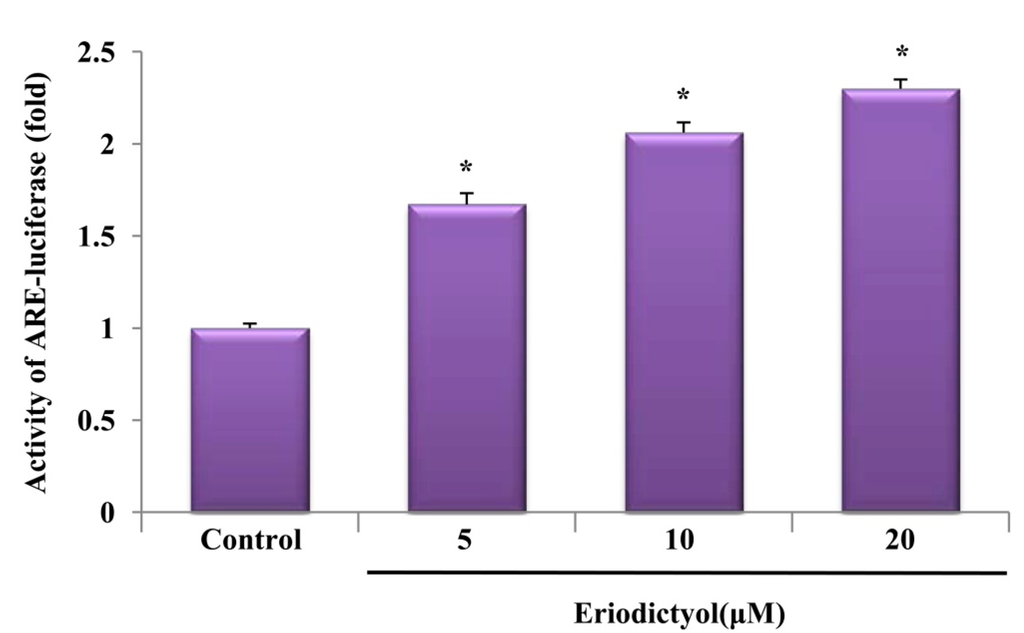 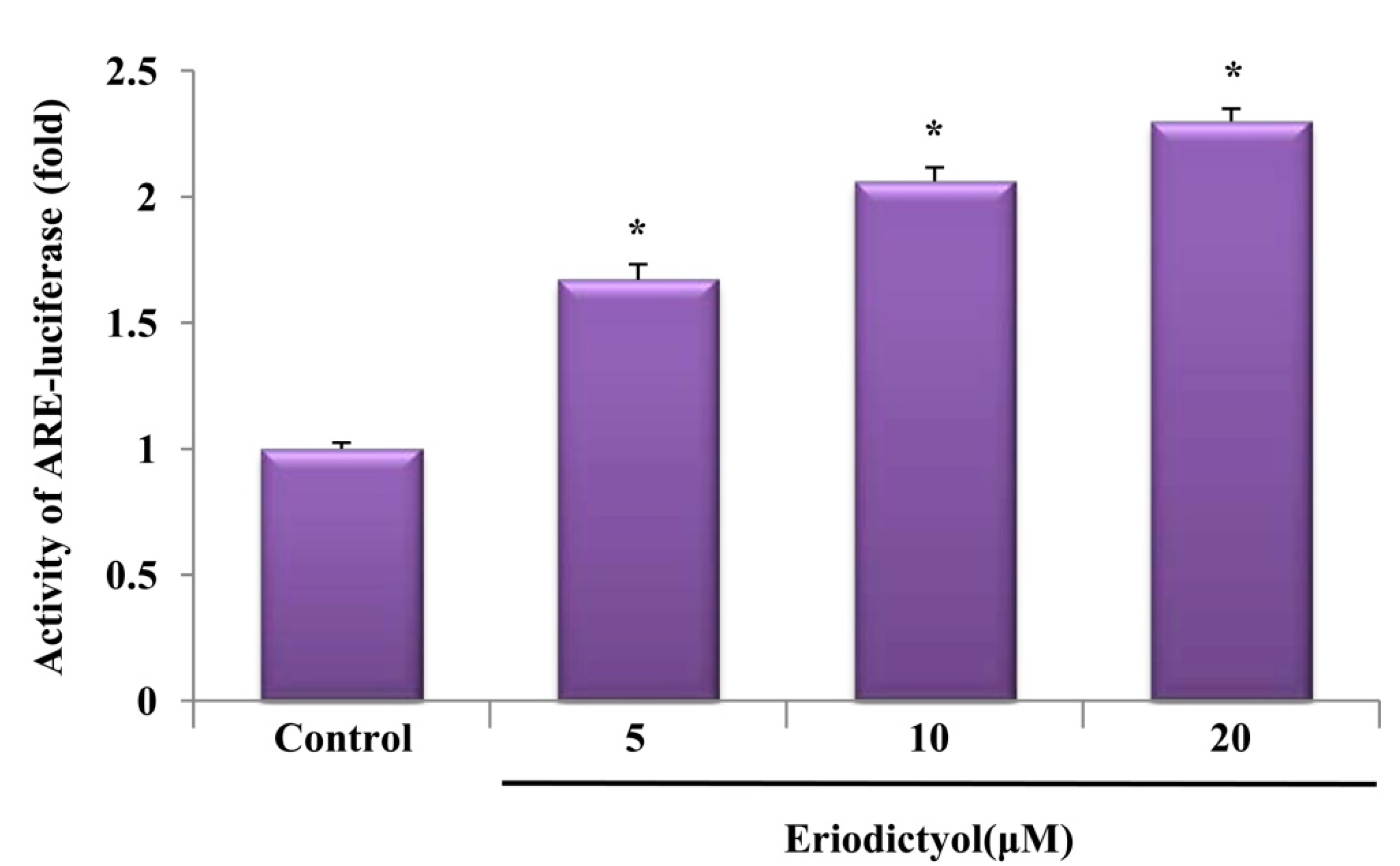 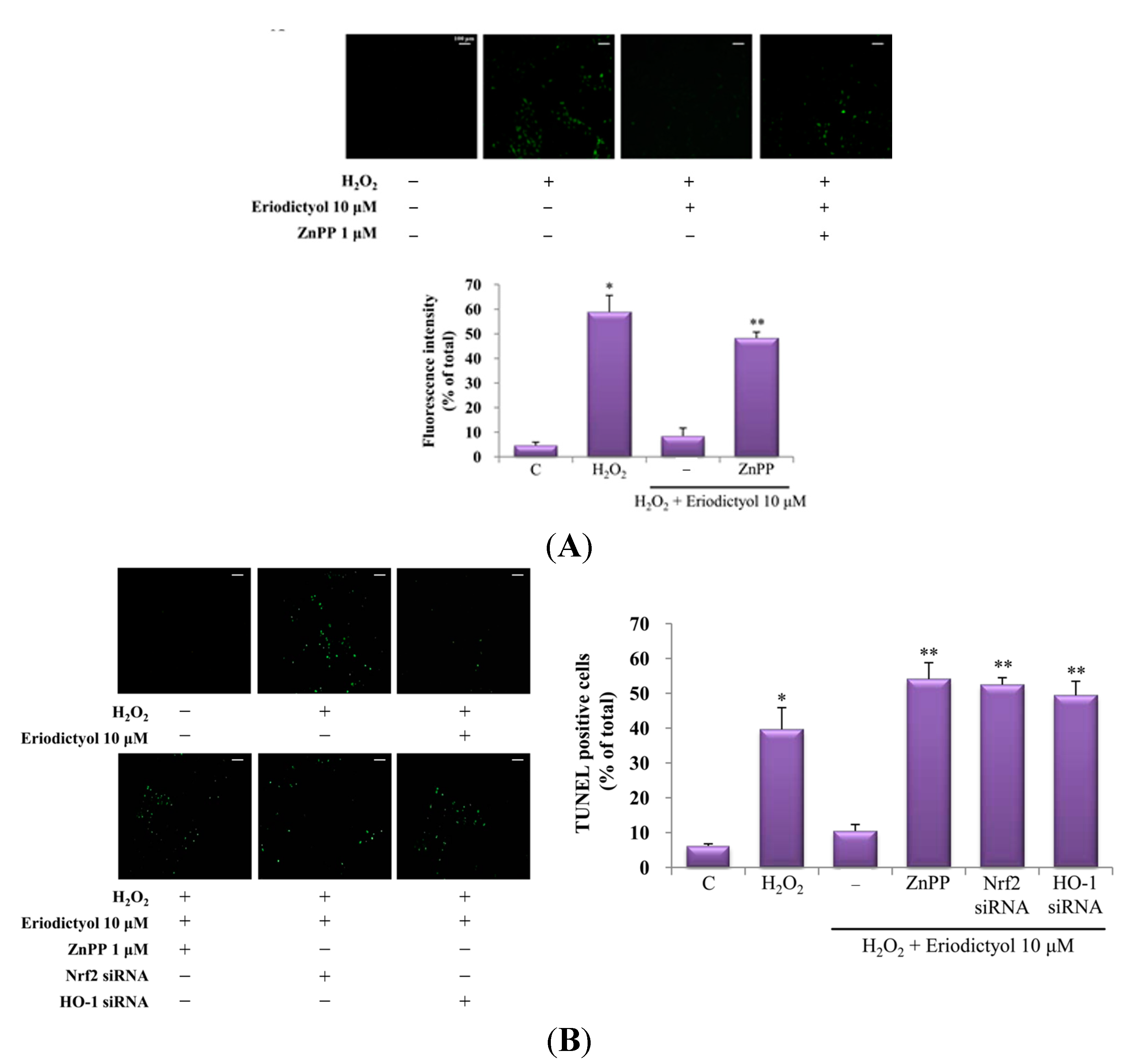 Vascular disease is the most common cause of deaths causing humans worldwide and is the leading cause of adult disability. Oxidative stress is a major risk factor in the pathogenesis of vascular disorder, suggesting that therapeutic strategies directed against oxidative stress are particularly valuable. Recently, increasing evidence has shown that the induction of the antioxidant enzymes by polyphenols can confer protection against vascular injury. Several studies highlight the ability of these natural plant-derived compounds to protect against vascular disease through activation of the antioxidant enzymes, such as HO-1 [30,31,32].
Moreover, many studies have supported the beneficial association between health and polyphenols in fruits and vegetables. Among the various polyphenols, flavonoids in particular exhibit various biological properties, including anti-cancer, anti-inflammatory, and anti-oxidative effects. A range of health benefits related to the Mediterranean diet has been attributed to flavonoids such as protection from cancer and cardiovascular disease [33,34]. Eriodictyol, a flavonoid present in fruits and vegetables, has long been established as a potent antioxidant. Recently, numerous studies have demonstrated that eriodictyol could serve as a pharmaceutical, nutraceutical, or functional food for patients with a range of disorders such as atopic dermatitis and diabetes [35,36,37,38]. Nevertheless, the effects and underlying mechanisms of HO-1 upregulation by eriodictyol have not been explored in endothelial cells. In this study, we discovered that the flavonoid eriodictyol clearly induces HO-1 expression through ERK/Nrf2/ARE-dependent pathways in endothelial cells.
The upregulation of phase II enzymes by natural compounds such as flavonoids exhibits protective effects [39,40]. Among phase II cytoprotective enzymes, HO-1, a stress-inducible protein, is broadly distributed in mammalian tissues. HO-1 has anti-inflammatory and antioxidant effects that result in protective actions in various pathological models [41,42,43]. Moreover, the promotion of HO-1 activity protects against oxidative stress-induced cell death [44,45].
Numerous kinases and Nrf2/ARE-dependent transcription are known to be involved in HO-1 expression. The present study revealed that the ERK pathway and the translocation of Nrf2 in the nucleus are required for eriodictyol-induced HO-1 expression. Additionally, the effect of Nrf2 knockdown on HO-1 expression supports the assertion that the upregulation of HO-1 is associated with the transcription factor Nrf2. In response to stimuli, Nrf2 separates from its inhibitory protein, Kelch-like ECH-associated protein 1 (Keap1), and translocates to the nucleus, wherein it binds to the ARE sequence to activate transcription of a variety of anti-oxidative and detoxification genes such as HO-1 [25]. Increase in ARE promoter activity by eriodictyol treatment indicates that it could enhance ARE transcriptional activity. Collectively, these data imply that eriodictyol-stimulated HO-1 expression requires activation of ERK/Nrf2/ARE in endothelial cells.
The upregulation of HO-1 inhibits oxidative stress-induced cell death [6]. In the present study, we examined that suppression of eriodictyol-induced HO-1 expression by treatment with the HO-1 inhibitor or Nrf2 or HO-1 siRNA increased cell death in H2O2-stimulated endothelial cells, suggesting that eriodictyol-induced HO-1 expression serves as a mechanism for protecting cells against oxidative stress.
In summary, we demonstrated that eriodictyol, a naturally-derived flavonoid, up-regulates HO-1 expression in human primary endothelial cells in association with ERK/Nrf2/ARE signaling pathways, and it can potently diminish H2O2-induced oxidative damage via the induction of HO-1. Our findings indicate that eriodictyol has potential therapeutic application in protecting against oxidative stress-related diseases, including cardiovascular disease.

HUVECs (StemCell Technologies, Vancouver, BC, Canada) were maintained in M199 medium supplemented with 10% fetal bovine serum, 100 U/mL penicillin, 100 µg/mL streptomycin, 10 ng/mL human fibroblast growth factor, and 18 mU/mL heparin, at 37 °C under an atmosphere of 5% CO2. The cells were grown to approximately 80% confluence, maintained using fresh culture medium, and subcultured every 2−3 days. The cells were used within passages 4−9 during these experiments.
Cell viability was measured using the conventional MTT assay as described [28].

Reverse transcription was performed as described previously [28]. The primer sequence for human HO-1 was 5′-ACATCTATGTGGCCCTGGAG-3′ (forward) and 5′-TGTTGGGGAAGGTGAAGAAG-3′ (reverse) [28]. The amplified products were resolved by 1% agarose gel electrophoresis, stained with ethidium bromide, and photographed under ultraviolet light.

HO enzyme activity was measured as described previously [28]. Briefly, microsomes from harvested cells were added to a reaction mixture containing NADPH, rat liver cytosol as a source of biliverdin reductase, and hemin as the substrate. The reaction was carried out in the dark for 1 h at 37 °C, and the amount of extracted bilirubin was determined by calculating difference in absorbance at 464 and 530 nm.

HUVECs were plated in 6-well plates at a density of 2.0 × 105 cells per well and transfected with ERK or Nrf2-siRNA or scrambled siRNA for 18 h. For each transfection, 1200 μL of the transfection medium was was added to 0.25–1 μg or 10–30 nM of the siRNA duplex/transfection reagent mix (TransPass R2 solution A + B), and the entire volume was added gently to the cells.

4.8. Measurement of ARE Promoter Activity

The EpRE/ARE-luciferase (EpRE/ARE-Luc) reporter plasmid was a generous gift from Rae-Kil Park (Wonkwang University, Iksan, Korea). The plasmid was generated by transfer of the enhancer 2 (E2) and minimal promoter (MP) sequences into the luciferase reporter plasmid pGL3-Basic [46]. Promoter activity was determined as described previously [44].

Intracellular ROS in hydrogen peroxide (H2O2)-stimulated cells was analyzed by staining using DCF/DA. In brief, 4.0 × 105 cells were incubated in 60 mm-diameter dishes with or without 1 μM ZnPP for 1 h. The cells were treated with eriodictyol or vehicle for 1 h followed by treatment of the cells with 300 μM H2O2 for 17 h. Then, the cells were stained with 10 μM DCF/DA for 60 min. After rinsing with phosphate-buffered saline, the cells were examined by fluorescence microscopy.

DNA fragmentation was measured using the commercially available In Situ Cell Death Detection kit (Roche Diagnostics, Mannheim, Germany). HUVECs were cultured in a glass culture chamber slide and fixed for 30 min in a 10% neutral buffered formalin solution at room temperature. A TUNEL assay system was used, according to the manufacturer’s instructions, for examination under a fluorescence microscope (Eclipse 50i, Nikon, Tokyo, Japan), with excitation at 488 nm and emission at 525 nm.

This work was supported by the National Research Foundation of Korea (NRF) grant funded by the Korea government (MEST) (No. 2011-0030072).