In Vivo Immunotoxicity of [email protected](Y0.5Gd0.45Eu0.05)2O3 as Dual-Modality Nanoprobes
Previous Article in Journal

Herb extracts of Tripterygium Wilfordii Hook. f. (T. wilfordii) have been widely used in China for years as anti-inflammation agents in many chronic inflammatory diseases and autoimmune diseases [1,2]. Celastrol, a major component of T. wilfordii, has exerted a profound anti-inflammatory effect on various animal models, including rheumatoid arthritis [3,4], atherosclerosis [5], Alzheimer’s disease [6,7], asthma [8] and systemic lupus erythematosus [9]. However, the mechanisms underlying the anti-inflammatory action of celastrol have not been fully explored.
Endocannabinoids have been discovered as one of the most common endogenous systems engaged in the modulation of inflammation and pain perception [10,11,12]. They comprise two major components, anandamide (AEA) and 2-arachidonoylglycerol (2-AG), along with two cannabinoid receptors, cannabinoid receptor-1 (CB1) and cannabinoid receptor-2 (CB2), and the enzymes involved in their biosynthesis and hydrolysis [10]. The activation of CB1 and CB2 signals produces antinociceptive and anti-hyperalgesic effects at peripheral and central levels [13,14]. Although the distribution of the CB1 receptor in primary afferent neurons is attributed to the analgesia effect, the activation of the CB1 receptor is associated with the central side effects, including ataxia, psychosis and catalepsy [15]. Recent findings suggest that the CB2 receptor also contributes to anti-hyperalgesia by inhibiting the release of proinflammatory factors from non-neuronal cells located near nociceptive neuron terminals [16]. CB2 is expressed in several types of inflammatory cells and immune cells, and the activation of the peripheral CB2 receptor generates an antinociceptive response in inflammatory pain and neuropathic pain [17,18]. Therefore, selective activation of the CB2 receptor has potential to reduce pain without inducing the centrally-mediated side effects.
Previous studies showed that targeting a cannabinoid-hydrolyzing enzyme, monoacylglycerol lipase (MGL), attenuated inflammatory pain and neuropathic pain through elevating 2-AG levels, which potently activated the CB2 receptor [19,20,21]. As natural herbs are important resources for drug discovery, many compounds from natural herbs have been identified as analgesia agents targeting the endocannabinoid system [22,23]. King et al. [24] found natural triterpenoid compounds, celastrol and euphol, exhibiting the potent inhibition of MGL activity with IC50 values of 1.6 ± 0.4, 0.31 ± 0.08 μM, respectively. Recently, Dutra et al. demonstrated that oral administration of euphol effectively prevented hyperalgesia induced by carrageenan and ligation of the sciatic nerve through the cannabinoid-mediated pathway [25].
In the present study, we assessed the effect of natural compound celastrol and elucidated the mechanisms underlying celastrol’s action in preventing inflammatory and neuropathic pain. Furthermore, we investigated the cytokine status responding to the inflammatory pain and the effects of celastrol on cytokine-mediated nociception. As few drugs are currently available for the treatment of chronic pain, our study provides the evidence that celastrol might be a promising molecule for the management of inflammatory and neuropathic pain.

The interaction between celastrol and the endocannabinoid system has been demonstrated previously [20,24]. Celastrol inhibited the activity of MGL, an enzyme deactivating 2-AG [24], which reduced inflammatory nociception mediated by cannabinoid signals [20]. To investigate whether the cannabinoid system involves in the analgesia property of celastrol, we blocked cannabinoid signals with CB1 or CB2 antagonists and assessed the analgesia effect of celastrol in carrageenan-induced inflammatory pain mice. Mice were pre-treated with selective CB1 antagonist SR141716 (1 mg/kg, i.p.) or CB2 antagonist SR144528 (1 mg/kg, i.p) 15 min before celastrol (0.3 mg/kg, i.p) regimen and then examined for pain withdraw threshold by allodynia test 2 h after carrageenan injection. We found that the analgesia effects of celastrol on carrageenan-induced pain were eliminated by SR144528 (Figure 2), but not by SR141716, suggesting that CB2 signaling participated in the antinociceptive effect of celastrol in carrageenan-induced inflammatory pain. 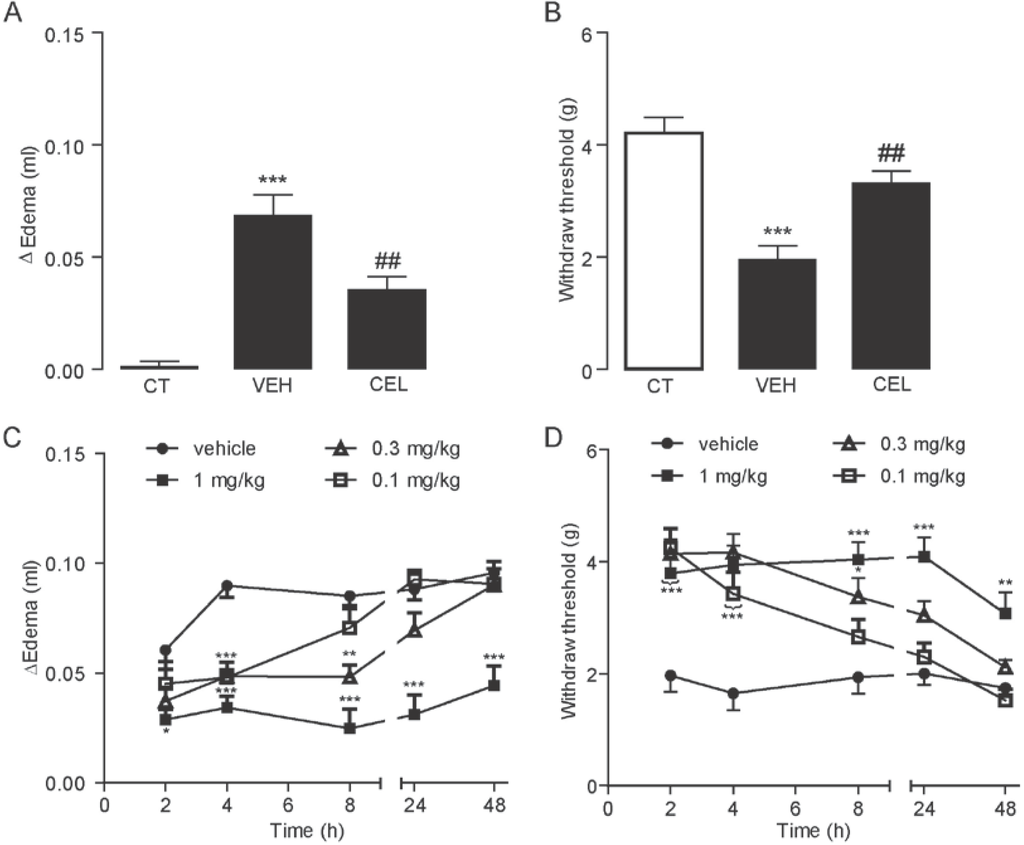 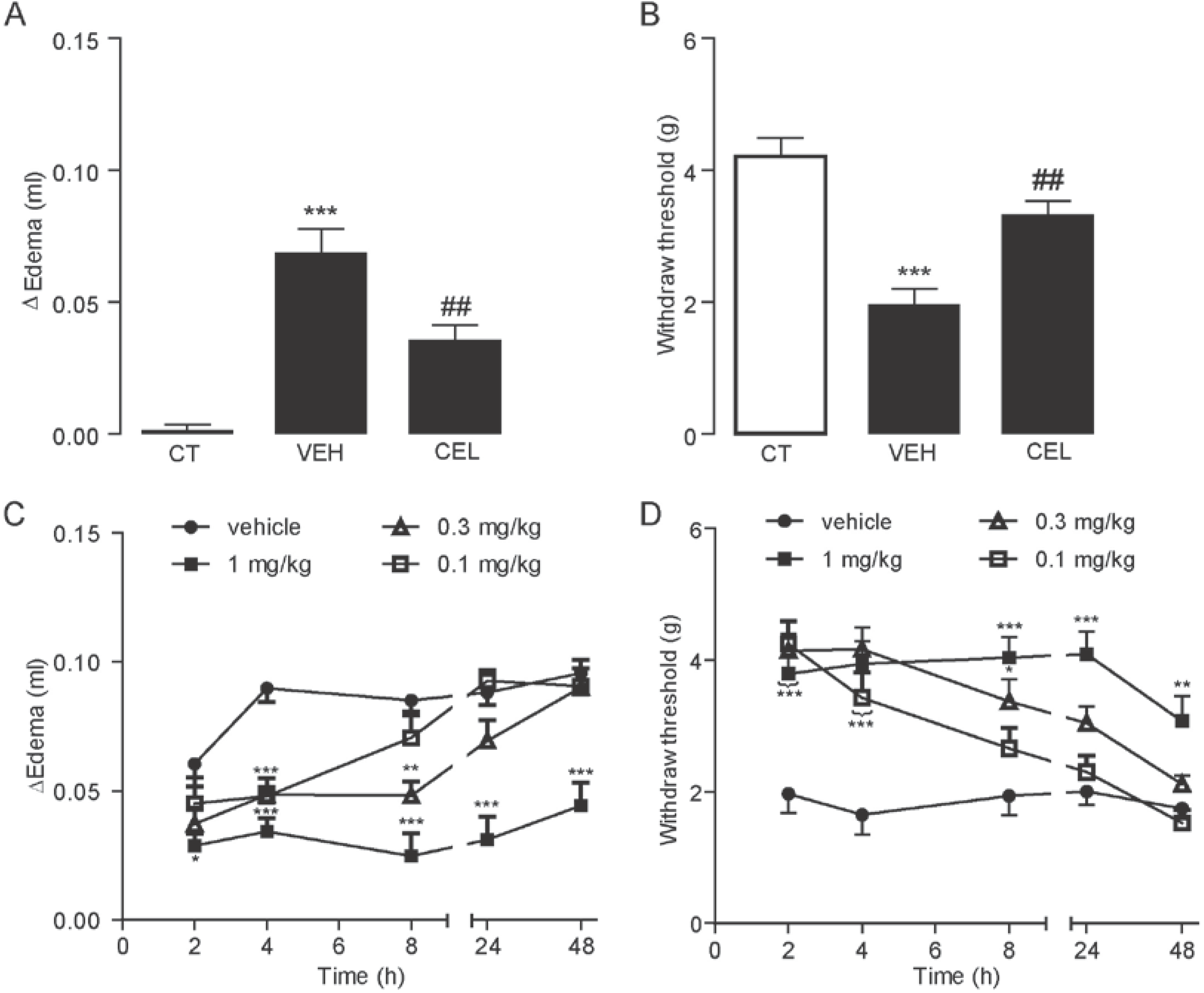 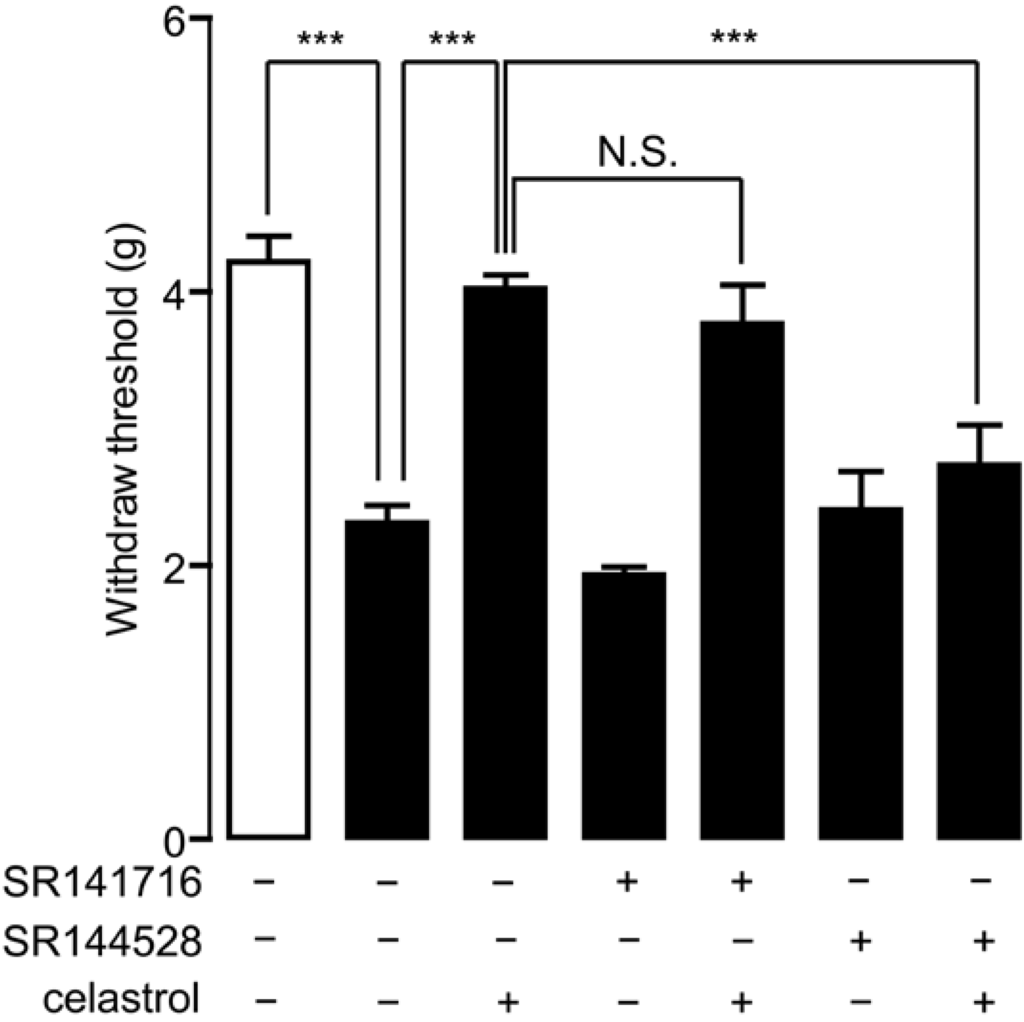 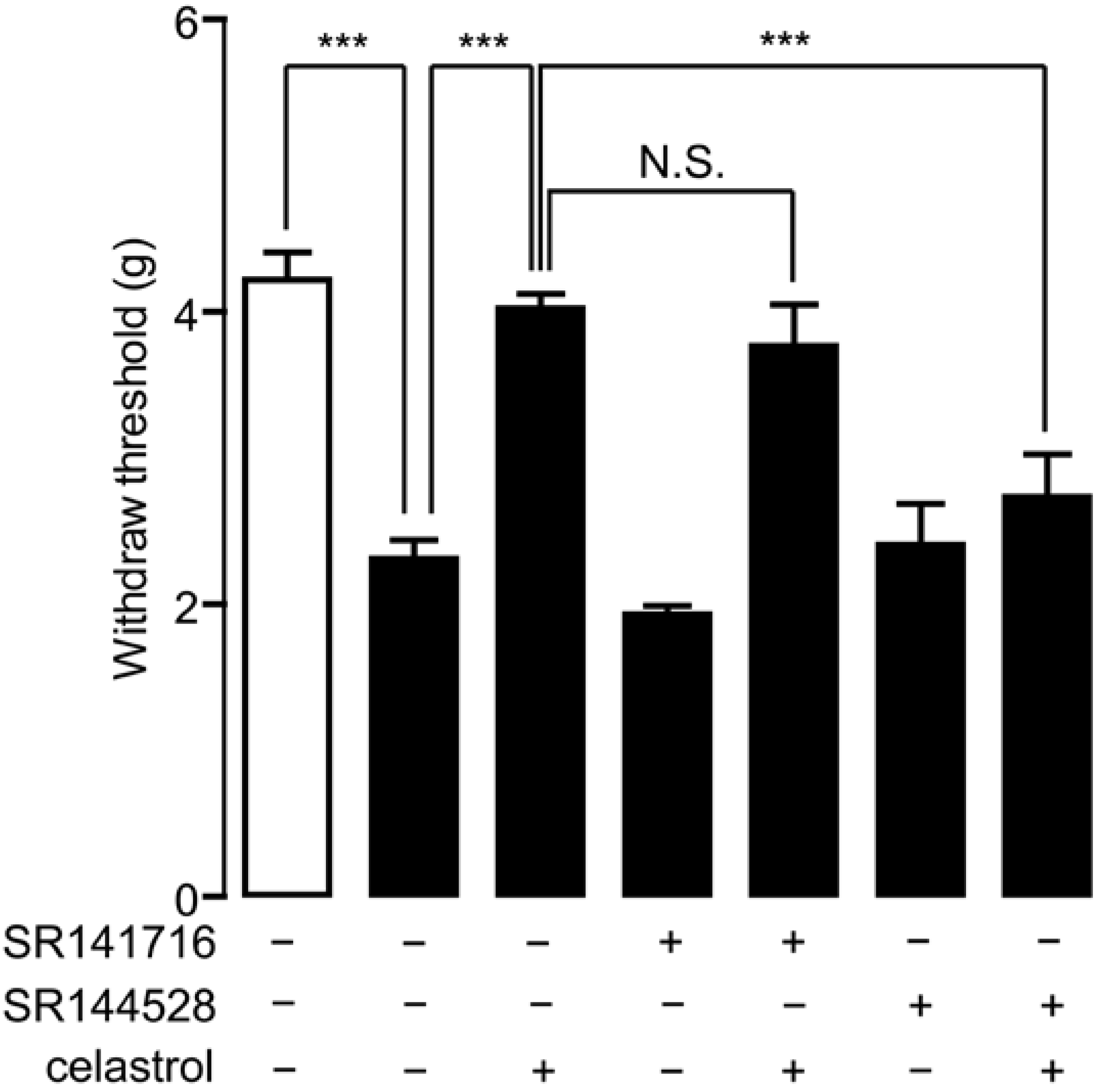 2.5. Analgesia Effect of Celastrol in Neuropathic Pain Was Mediated by the CB2 Signal 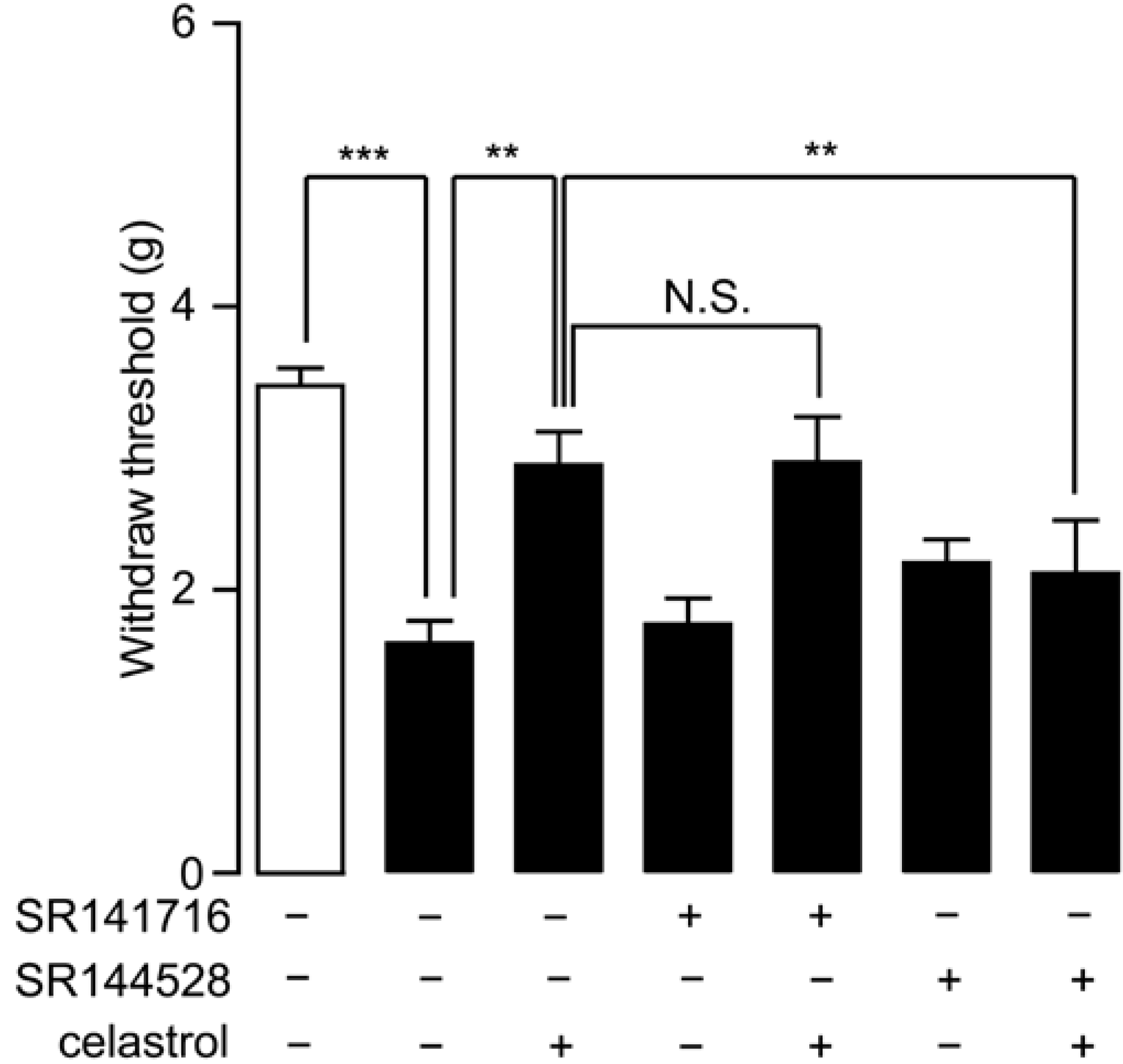 Inflammatory pain was induced by injecting λ-carrageenan (2% in sterile saline, 20 μL) subcutaneously into the left hind paw using a 27-gauge needle (Gaoge, Shanghai, China). Edema and an allodynia test were conducted at 2, 4, 6, 8, 24 and 48 h after carrageenan administration.

The procedure was performed as previously reported [32] with slight modification. Briefly, C57BL/6J mice were anesthetized with pentobarbital sodium (80 mg/kg, i.p.) (Sangon Biotech, Shanghai, China), and the hair in the operative area was shaved from slightly below the knee area to the hip area of the left thigh. After disinfection with 75% ethanol, a 1-cm incision on the left thigh was made in the longitudinal direction proximal to the knee, and muscle layers were separated by blunt dissection; the biceps femoris muscle was identified. The mouse was placed under a stereomicroscope, and the sciatic nerve was visualized. Three terminal branches of the sciatic nerve, the sural nerve, common peroneal nerve and tibial nerve, were identified. We used a pair of tweezers to separate nerves, placed a suture (6-0 suture) under the two branches, the tibial nerve and common peroneal nerve, made a tight surgical knot, gently grabbed the nerves with the suture and cut the nerves with a micro-scissor. The scission was closed with a suture, cleaned with 70% ethanol and covered with sterilized gauze pad. This procedure made the ligation of the tibial nerve and common peroneal nerve, but kept the sural nerve intact. Sham-operated controls underwent the same procedure without nerve lesion. After surgery, mice were placed in a clean cage with a heating pad and ensured easy access to water and chow.

Pain nociception was determined using the automated Dynamic Plantar Aesthesiometer system (Ugo Basile, Comerio, Italy). Briefly, mice were placed into the enclosure compartments with a wire grid bottom, a total 12 units, at least 30 min prior to the experiment, to be habituated to the environment. A touch stimulator was located under the target area of the mouse paw; using the adjustable angled mirror, a thin steel filament (diameter 0.5 mm) was pushed against the plantar surface of mouse paw with increasing force, until the paw withdrawal, and the force was recorded automatically. The apparatus was set from 0 g to a maximum of 5 g within 20 s (ramp 0.25 g/s) and manually stopped when the force reached the maximum. The paw withdrawal threshold was calculated as the mean of 5 consecutive assessments at intervals of 20 s.

Paw edema was measured by the changes in paw volume by water displacement with a plethysmometer (Ugo Basile, Comerio, Italy). The plethysmometer contained two vertical water-filled interconnecting Perspex tubes; the large one (A, 18-mm diameter) was used to measure fluid displaced by the paw, and the small tube contained a transducer with data analysis software (Ugo Basile, Comerio, Italy). The edema was calculated by subtracting the volume of the contralateral paw from that of carrageenan-injected paw.

Altogether, our data demonstrated that celastrol significantly reduced nociceptive pain and elucidated the possible mechanism underlying the analgesia effect of celastrol through CB2 signaling. The cannabinoid-mediated analgesia effect has been fully defined for many years; however, the undesired central nervous system adverse effects limited its use in humans [33]. As increasing evidence supporting the utilization of selective CB2 agonists for managing pain [34], our findings showed that the analgesia effects of celastrol were mediated by CB2 signaling. The pharmacological action of celastrol on pain is concomitant with the following: (i) as a potent MGL inhibitor, celastrol activates CB2 signaling through an increase of CB2 endogenous ligand 2-AG, a substrate catalyzed by MGL; and (ii) the blockage of CB2 signaling by selective antagonist completely eliminates celastrol’s pharmacological effects. Without exploring the target site of celastrol’s action in animal models, we lack the information regarding the endogenous 2-AG levels, and this limitation will be studied in the future. In addition, investigating whether celastrol directly interacts with the CB2 receptor will be of great interest and value for the full elucidation of celastrol’s pharmacological properties. As there are few drugs effectively managing neuropathic pain and their common side effects restrict their use in certain patients [35], our findings might usher in a new field for the development of safe and efficacious drugs for chronic pain.

L.Y. and Y.L. performed the experiment; J.R. and C.Z. analysed the data; J.F., D.L. and Y.Q. designed the experiment and wrote the paper. All authors discussed the results and commented on the manuscript at all stages.