Quality Control and Stability Studies with the Monoclonal Antibody, Trastuzumab: Application of 1D- vs. 2D-Gel Electrophoresis

Recombinant monoclonal antibodies (rmAbs) are medicinal products obtained by rDNA technology. Consequently, like other biopharmaceuticals, they require the extensive and rigorous characterization of the quality attributes, such as identity, structural integrity, purity and stability. The aim of this work was to study the suitability of gel electrophoresis for the assessment of charge heterogeneity, post-translational modifications and the stability of the therapeutic, recombinant monoclonal antibody, trastuzumab. One-dimensional, SDS-PAGE, under reducing and non-reducing conditions, and two-dimensional gel electrophoresis were used for the determination of molecular mass (Mr), the isoelectric point (pI), charge-related isoform patterns and the stability of trastuzumab, subjected to stressed degradation and long-term conditions. For the assessment of the influence of glycosylation in the charge heterogeneity pattern of trastuzumab, an enzymatic deglycosylation study has been performed using N-glycosidase F and sialidase, whereas carboxypeptidase B was used for the lysine truncation study. Experimental data documented that 1D and 2D gel electrophoresis represent fast and easy methods to evaluate the quality of biological medicinal products. Important stability parameters, such as the protein aggregation, can be assessed, as well.
Keywords: trastuzumab; 2D-electophoresis; SDS-PAGE; charge heterogeneity; stability trastuzumab; 2D-electophoresis; SDS-PAGE; charge heterogeneity; stability

SDS-PAGE showed that under reducing conditions, trastuzumab migrated as two sharp bands at ~50 and ~23 kDa, corresponding to Mr of the respective HC (heavy chain) and LC (light chain) polypeptides, whereas under non-reducing conditions, a single band was observed at ~150 kDa (intact antibody). In accordance with previously published data, 2D-electrophoresis showed multiple spots spreading at ~50 and ~23 kDa; numerous poorly resolved spots were observed in both chains, particularly in HC, the most intense spots laying on the basic end [2] (Figure 1). In order to assess the contribution of N-linked glycans and the C-terminal lysine truncation in the spot complexity of trastuzumab, three selected enzymes have been employed: N-glycosidase F, sialidase and carboxypeptidase B.
Two-dimensional gel electrophoresis (2-DE) experiments involving N-deglycosylation, desialination and terminal lysine cleavage demonstrated no significant changes in the pIs and Mr of trastuzumab HC and LC, as shown in Figure 1 (Immobilized pH gradient, IPG 3–11, nonlinear, NL and IPG 6–9 linear, L, respectively). As we reported previously [2], the high value of gel-to-gel variation in the spot intensity does not allow the detection of these small changes. These data were expected, since in the trastuzumab molecule, N-linked, asialo, biantennary complex oligosaccharides are dominant and, according to the literature data, only a minor percentage of terminal sialidated sugars is present (1%–3%) [8,40]. Furthermore, HC terminal lysine truncation can be a source of charge heterogeneity; however, it can bring about only small pI difference between the “normal” and “truncated” form of the antibody, and this difference could not be detected with 2D-electrophoresis.

This study addressed the thermal degradation of trastuzumab under accelerated storage conditions. 1-DE and 2-DE analyses were evaluated for their ability to monitor possible changes in the electrophoretic pattern of trastuzumab upon forced degradation conditions, to detect possible degradation products and to assess the effect of other severe conditions (temperature, oxidation and low pH) in the stability of this drug product. In Figure 2, a thermo-degradation study of mAb, trastuzumab solution stored at different temperature conditions is presented. 2-DE analysis showed that, in accordance with published data [29], trastuzumab, like other antibodies, may be a protein resistant to short exposure to thermal and physical stress. As depicted in Figure 2, the influence of temperature in the spot pattern of the antibody is remarkable only upon longer time storage. Storage for 30 and 45 days at room temperature resulted in a change of the shape of both HC and LC spot patterns. In samples stored 45 days at 37 °C, new spots located above LC and HC are noted, and in those stored seven days at 50 °C, new spots can be seen at pI 7.5–8 at Mr ~55, ~75 and ~100 kDa, suggesting the possible aggregation of the antibody molecule (Figure 2). On the other hand, no significant difference in the spot pattern has been noted in gels stored for a shorter time, even at 37 °C. Neither the Mr nor pI of spots changed significantly and consistently. This suggests that the degradation pathway of trastuzumab could involve chemical reactions, such as asparagine deamidation, asparagine and aspartate isomerization and methionine oxidation, which does not cause bigger differences in Mr and pI of the resulting species to be detected with 2-DE. Similar results were obtained when electrophoresis experiments were run under a linear pH gradient, IPG 6–9 L (data not presented). On the other hand, significant differences in the pI and Mr of trastuzumab 2-DE spots are observed upon seven-day sample storage in a solution of 1% trifluoroacetic acid, (Figure 3, Gel 2) and 3% hydrogen peroxide solution (Figure 3, Gel 3), at ambient temperature. Under these conditions, significant changes were observed, both in the pI and Mr of the resulting spots, provided that elevated temperatures substantially accelerated degradation, eventually leading to the complete degradation and denaturation of the sample (data not shown).
Although, from SDS-PAGE gels, no information regarding pI can be obtained, the Mr changes of trastuzumab under different storage conditions in this electrophoresis setting are evident. Samples stored at room temperature upon 31 days provided gels with additional bands at higher Mr (Figure 4, Gels 2, 3 and 4). In contrast to the control sample (Figure 4, Gel 1), in Gel 2, the trastuzumab sample was stored 31 days at ambient temperature; there is a sharp band at a molecular mass of 100 kDa, which has almost the same intensity with heavy chain band (50 kDa). Additional bands are present at molecular masses of 150 and 200 kDa, respectively.
Figure 4 shows that a higher number of protein bands is observed when samples were stored at ambient temperature (Gels 2 and 3, Lanes E, F and G and Lanes B, C, D, E, F, respectively) compared to samples stored at 4–8 °C (Gels 4 and 3, Lanes B, C and D). This observation may suggest trastuzumab aggregation as a physical degradation pathway.
A different lot of the trastuzumab sample was loaded onto Gel 3.
SDS-PAGE gels of trastuzumab stored under oxidative and acidic conditions are presented in Figure 5. As noted in Figure 5, severe storage conditions, employing Trifluoroacetic acid (TFA) 1% (Gel 1, Lanes D and E) and H2O2 1 and 3%, 19 days, (Gel 2, Lanes D, E and B, C, respectively), brought about a significant change in the protein band pattern compared to the control gel (Figure 4, Gel 1). Interestingly, additional protein bands above and below 50 kDa have been observed in H2O2 subjected samples. However, samples stored in the solution of TFA 1% provided additional bands predominantly below 50 kDa (Gel 1, Lanes d and E). On the other hand, samples stored 19 days at 37 °C provided additional bands above 50 kDa, similarly as in Figure 4, (Gel 2).
The left part of this gel (Lanes B, C and D, trastuzumab stored at 4–8 °C, 31 days) shows the same Mr pattern as Gel 4. The same holds for Lanes E, F, G and Gel 2 (ambient temperature, 31 days).

Before loading onto SDS-polyacrylamide gels, focused IPG strips were equilibrated twice, by gently shaking for 15 min in SDS equilibration buffer (50 mM Tris–HCl, 6 M urea, 30% glycerol, 2% SDS, 0.005% bromophenol blue) containing 1% DTT and then for another 15 min in SDS equilibration buffer containing 2.5% iodoacetamide [42]. The equilibrated IPG strips were embedded on top of the vertical SDS gel and fixed with molten agarose solution (Agarose Serva Standard low EEO, research grade (Serva Electrophoresis GmbH, Heidelberg, Germany)). The second-dimension, SDS-PAGE, was run on a vertical system (PROTEAN® II Xi Cell for vertical electrophoresis, 20 cm × 20 cm, lab-made gels 12.5% T (total amount of acrylamide), homogenous, 2.6% C (amount of cross-linker), Bio-Rad Laboratories, (Hercules, CA, USA) under a constant current of 45 mA/gel until the bromophenol blue front reached the bottom of the gel. Molecular mass standards (Precision Plus Unstained Protein™ Standards, Bio-Rad Laboratories) were placed at the anodic end of the SDS-PAGE gel. One-dimensional, SDS-PAGE was performed on the mini-gel system, Mini-PROTEAN® 3 Cell (Bio-Rad Laboratories), according to standard methods [43]. Silver nitrate staining was performed as described in [44], whereas gel images were digitized using a Bio-Rad GS-710 Densitometer and analyzed with PDQuest 6.2.1. (Bio-Rad Laboratories).
Enzymatic deglycosylation of trastuzumab was carried out according to the published procedures [2,8]. Solutions of the pharmaceutical preparation, trastuzumab (Herceptin®, F. Hoffmann-La Roche, Basel, Switzerland) 21 mg/mL collected from the vials immediately after clinical use in Vienna Hospital Rudolfstiftung, were dialyzed against Milli-Q water (3 days, 4 °C) using a cellulose dialysis tube (cut-off: 12,000–14,000 Da, Japan Medical Science, Tokyo, Japan). After dialysis, solutions were lyophilized, and samples of pharmaceutical preparations, 0.5 mg each, were dissolved in 49 μL phosphate buffer (pH 7.5) to obtain a final concentration of 500 μg/50 μL. N-Glycosidase F, recombinant, from Flavobacterium meningosepticum, expressed in E. coli, 100 U/100 μL was used for the release of N-linked oligosaccharides, (15 U/150 μg rmAb). Neuraminidase (sialidase) from Arthrobacter ureafaciens, 100 U/0.1 mL, 30 mU/150 μL rmAb, was used for the removal of sialic acids. The study of the lysine truncation was performed using enzyme carboxypeptidase B, 750 U/mL, (0.75 U/150 μg rmAb). All enzymes were purchased from Roche Diagnostics, Mannheim, Germany. After overnight digestion at 37 °C, samples were stored at −80 °C.
The rate of chemical degradation was increased by subjecting the reconstituted pharmaceutical formulation, Herceptin®, to elevated temperatures, oxidation (hydrogen peroxide solution, 1% and 3%) and low pH conditions (trifluoroacetic acid, 1%). For the thermal stability study, the drug substance was stored at ambient temperature, 4–8, 37 and 50 °C in a Thermomixer comfort (Eppendorf AG, Hamburg, Germany), and after storage up to a given time, the sample was analyzed with 1D- and 2D-electrophoresis. The testing frequency was weekly for 2 months and daily for 1 week.

This study confirms that SDS-PAGE and 2D electrophoresis can be used for the quality evaluation of recombinant monoclonal antibodies. These easy and simple techniques can be used for the identification, assessment of purity and aggregation of biological medicinal products. Compared to SDS-PAGE, in relation to the charge heterogeneity pattern of antibodies, 2-DE has been shown to be a superior method. However, experimental results obtained from the stability study suggested that SDS-PAGE can be more suitable for the detection of higher molecular mass species, i.e., aggregates, which can arise upon different storage conditions of this monoclonal antibody. On the other hand, for the comprehensive stability characterization of complex drugs, including recombinant mAbs, 1D-/2D-electrophoresis alone can provide limited information. Therefore, for this purpose, a combination of different analytical methodologies is required.

Authors acknowledge the financial support by the Office of Research Services and International Relations of University of Vienna and Thekla Korodi for providing the samples. 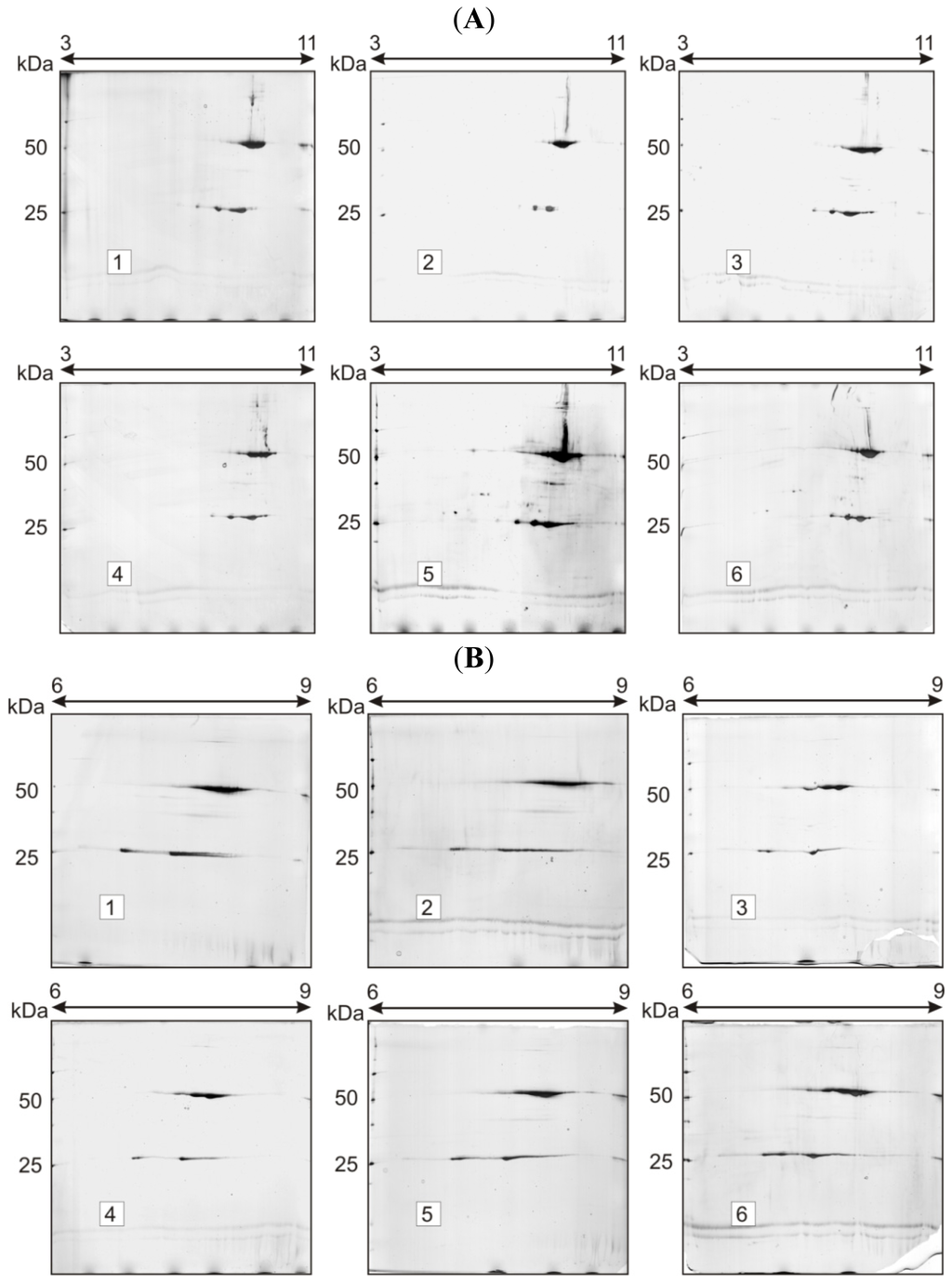 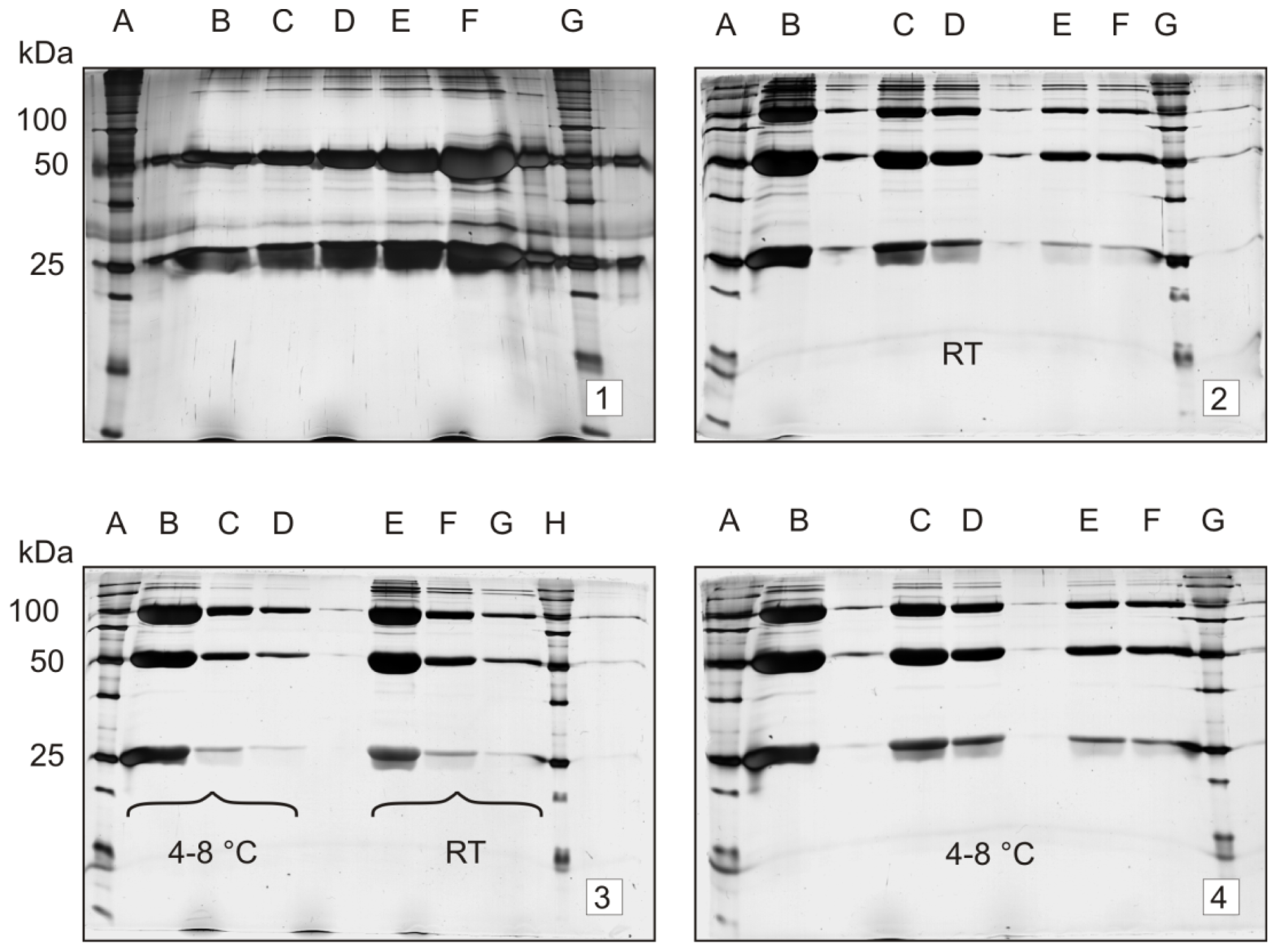