From End to End: tRNA Editing at 5'- and 3'-Terminal Positions
Next Article in Special Issue

Inhalation of Silver Nanomaterials—Seeing the Risks

Demand for silver engineered nanomaterials (ENMs) is increasing rapidly in optoelectronic and in health and medical applications due to their antibacterial, thermal, electrical conductive, and other properties. The continued commercial up-scaling of ENM production and application needs to be accompanied by an understanding of the occupational health, public safety and environmental implications of these materials. There have been numerous in vitro studies and some in vivo studies of ENM toxicity but their results are frequently inconclusive. Some of the variability between studies has arisen due to a lack of consistency between experimental models, since small differences between test materials can markedly alter their behaviour. In addition, the propensity for the physicochemistry of silver ENMs to alter, sometimes quite radically, depending on the environment they encounter, can profoundly alter their bioreactivity. Consequently, it is important to accurately characterise the materials before use, at the point of exposure and at the nanomaterial-tissue, or “nanobio”, interface, to be able to appreciate their environmental impact. This paper reviews current literature on the pulmonary effects of silver nanomaterials. We focus our review on describing whether, and by which mechanisms, the chemistry and structure of these materials can be linked to their bioreactivity in the respiratory system. In particular, the mechanisms by which the physicochemical properties (e.g., aggregation state, morphology and chemistry) of silver nanomaterials change in various biological milieu (i.e., relevant proteins, lipids and other molecules, and biofluids, such as lung surfactant) and affect subsequent interactions with and within cells will be discussed, in the context not only of what is measured but also of what can be visualized. View Full-Text
Keywords: silver nanomaterials; lung; toxicity; characterization; imaging; pulmonary surfactant silver nanomaterials; lung; toxicity; characterization; imaging; pulmonary surfactant
►▼ Show Figures 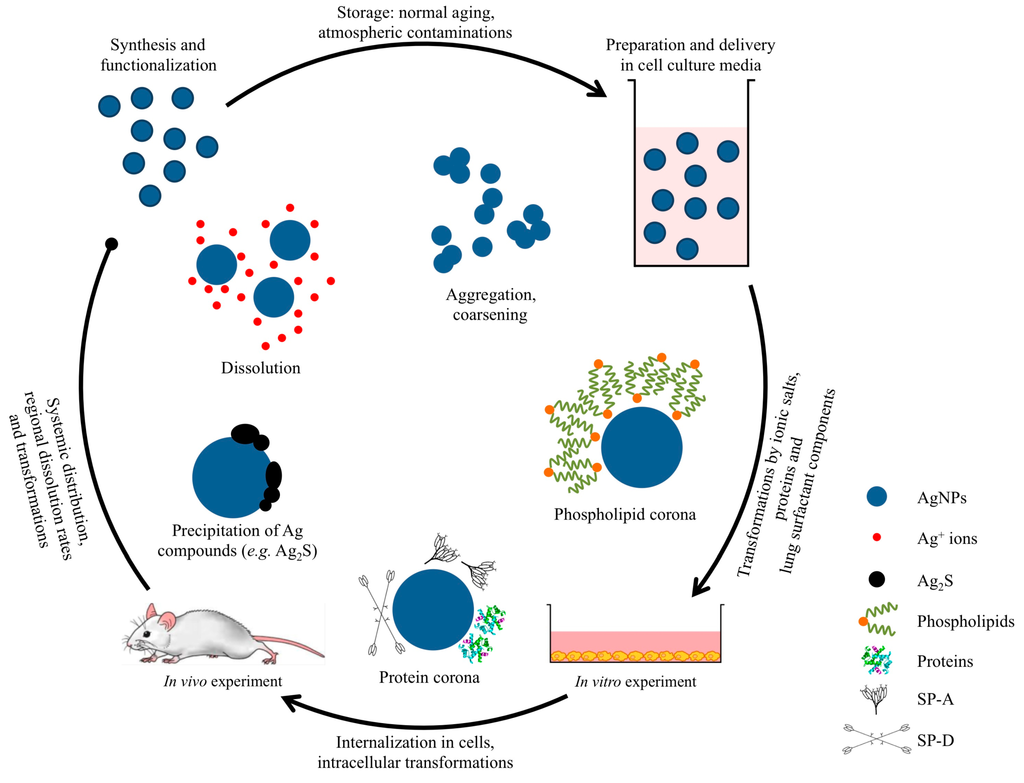