Discordance Rate of HER2 Status in Primary Gastric Carcinomas and Synchronous Lymph Node Metastases: A Multicenter Retrospective Analysis
Next Article in Special Issue

There is an increasing understanding that melatonin and the ubiquitin/ proteasome system (UPS) interact to regulate multiple cellular functions. Post-translational modifications such as ubiquitination are important modulators of signaling processes, cell cycle and many other cellular functions. Previously, we reported a melatonin-induced upregulation of gene expression related to ubiquitin/proteasome system (UPS) in Plasmodium falciparum, the human malaria parasite, and that P. falciparum protein kinase 7 influences this process. This implies a role of melatonin, an indolamine, in modulating intraerythrocytic development of the parasite. In this report we demonstrate by qPCR analysis, that melatonin induces gene upregulation in nine out of fourteen genes of the UPS, consisting of the same set of genes previously reported, between 4 to 5 h after melatonin treatment. We demonstrate that melatonin causes a temporally controlled gene expression of UPS members. View Full-Text
Keywords: melatonin; ubiquitin-proteasome-system; Plasmodium falciparum; malaria melatonin; ubiquitin-proteasome-system; Plasmodium falciparum; malaria
►▼ Show Figures 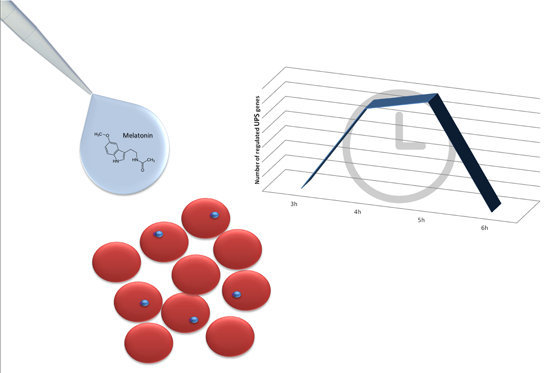