Hispolon Decreases Melanin Production and Induces Apoptosis in Melanoma Cells through the Downregulation of Tyrosinase and Microphthalmia-Associated Transcription Factor (MITF) Expressions and the Activation of Caspase-3, -8 and -9
Next Article in Special Issue

Endothelial function is already impaired in obesity and insulin resistance [1,2] and further deteriorates with the development of type 2 diabetes and cardiovascular disease [3,4]. Adipose tissue-derived metabolites, hormones and cytokines may play a major pathophysiological role in obesity-associated endothelial dysfunction [5–7]. One of the main candidate molecules for the link between endothelial dysfunction, cardiovascular disease, and insulin resistance is the endogenous nitric oxide synthase (NOS) inhibitor asymmetrical dimethylarginine (ADMA) [8,9]. The association between elevated glucose and plasma ADMA was recently confirmed in human subjects [10]. Dysregulation of the ADMA catabolizing enzyme dimethylarginine dimethylaminohydrolase (DDAH) is thought to contribute to elevated systemic ADMA concentrations reported in type 2 diabetes, hypercholesterolemia and hypertension [11]. Thus, a possible mechanism leading to increased ADMA concentrations is reduced DDAH activity through high glucose [12]. The principal genes of ADMA metabolism are expressed in adipose tissue [13], but the physiological relevance has never been tested in animals or humans. We assume that an acute increase in plasma glucose concentrations or alterations in insulin sensitivity will induce changes in interstitial ADMA concentrations in humans. We validated clinical microdialysis (MD) to monitor interstitial ADMA concentrations in human adipose tissue, both in the fasting condition and during an oral glucose load. We studied subjects with expected differences in interstitial ADMA concentrations due to differences in body weight and glucose homeostasis (lean healthy, diabetic, and morbidly obese subjects before and after weight loss surgery). Circulating ADMA concentrations were also determined for comparison. A second aim was to assess adipose tissue DDAH activity in visceral and subcutaneous adipose tissue.

Using a custom-made in vitro MD system, we established and validated a sensitive and accurate technique to measure ADMA by GC-MS/MS in 1-μL aliquots of MD samples. By testing in vitro stability, recovery and delivery of ADMA, we determined a minimal equilibration period of 20 min before stable ADMA concentrations could be measured. With increasing flow rates from 0.3 to 2 μL/min, recovery rates decreased from 105% to 81% (Figure 1) as expected.

A reliable analytical method based on serial MD sampling and GC-MS/MS was developed to continuously measure tissue interstitial ADMA levels in the clinical setting with a time resolution of 15 min over several hours. Time resolution could be even higher, given that we measured ADMA in 1-μL aliquots. Measurements of ADMA in human blood have long been established, but ADMA concentrations in the interstitial space of target tissues might provide more relevant information. Tissue interstitial ADMA concentrations had not previously been studied in humans. Our main finding is that interstitial adipose tissue ADMA concentrations are not different between morbidly obese subjects, subjects with diabetes, and normal weight healthy subjects, while plasma ADMA concentrations increase with higher BMI. Substantial weight loss, very surprisingly, did not change ADMA concentrations, neither in plasma nor interstitial values from adipose tissue. Another important finding is that rapid increases in plasma and interstitial glucose did not elicit significant increases in tissue ADMA concentrations, which is in line with a previous study in which no relation between food intake and ADMA levels could be established [17].
As indicated by previous studies, ADMA concentrations are closely related to the activity of ADMA metabolic enzymes (DDAH 1 and 2). Tissue insulin sensitivity is influenced by vascular glucose and insulin delivery to the interstitial space [18], whereas the endothelium regulates vascular homeostasis by the vasoactive mediator, NO, originated from NOS activity, which is in turn inhibited by ADMA [19]. In endothelial cell culture and tissue culture studies, even small changes in culture medium ADMA concentrations affected NOS activity [20]. Thus, a better understanding of local tissue production of ADMA in situ is important to elucidate the biological role of ADMA. We have developed a tool for such experiments.
Increased ADMA plasma concentrations were considered to be a major risk factor for type 2 diabetes and cardiovascular disease [19,21,22]. In a previous study, patients with the highest ADMA plasma concentrations had the lowest glucose tolerance [23]. Furthermore, elevated circulating ADMA in patients with insulin resistance was lowered by pharmacological improvement of glycemic control [8,24]. We did not observe such a strong relationship between interstitial glucose and ADMA concentrations in healthy obese subjects and subjects with diabetes. Furthermore, a strong relationship between BMI and plasma ADMA [25], improved endothelial function after weight loss [1,2,26], and decreased circulating ADMA after weight loss [27,28] were all described in previous studies. In our study, lower tissue blood flow was observed in diabetic patients compared to healthy normal weight control subjects and, after weight reduction, adipose tissue blood flow tended to increase. The observed higher tissue blood flow might be an indication for improved endothelial function which would be in line with previous studies [29–31]. Despite these findings, interstitial ADMA concentrations in our group of morbidly obese patients did not differ after a mean weight loss of 34 ± 13 kg. A possible explanation for the conflicting findings might be a different microdialysis recovery rate, because recovery depends on local blood flow [32]. Admittedly, the study has been carried out on small groups of subjects; therefore the observed difference in blood flow between our tested groups might have concealed the changes in local ADMA concentrations in adipose tissue. A possible mechanism by which endothelial function is altered may be due to up-regulation of DDAH. In rats, pioglitazone increased NO production partly by up-regulating tissue DDAH expression [33]. We measured DDAH activity both in subcutaneous and visceral adipose tissue. The enzyme activity was negligible compared to liver tissue which possesses high DDAH activity [34]. Considering our present findings, ADMA in adipose tissue seems to play a minor role in NO-dependent regulation of adipose tissue blood flow and metabolism. In human adipose tissue, gene expression of all enzymatic components of ADMA metabolism have been identified [13], but obviously the gene expression levels do not reflect DDAH activity. Overall, the role of local ADMA production in adipose tissue remains to be elucidated, but our findings at least suggest a minor role for blood flow regulation.

We employed a custom-made in vitro microdialysis system [35] to evaluate ADMA in vitro stability, delivery, and recovery using a clinical MD catheter (CMA 60, CMA/μDialysis, Stockholm, Sweden), and lactate-free Ringer solution (B. Braun, Melsungen, Germany). The in vitro data were employed to determine the best conditions for in vivo microdialysis.
For clinical microdialysis, all subjects were studied after an overnight fast while resting in the supine position on a comfortable bed in a room kept at 23 °C. Microdialysis catheters were inserted under sterile conditions into adipose tissue (8 to 10 cm left of the umbilicus) and connected to a microdialysis pump (CMA 107, CMA Microdialysis AB, Stockholm, Sweden). After probe insertion, catheters were perfused at a flow rate of 1 μL/min with sterile Ringer solution containing 50 mM ethanol. Following a sufficient equilibration period of at least 30 min, microdialysis samples were collected every 15 min for 30 min before and up to two hours after oral glucose ingestion. Microdialysis samples were placed on ice immediately after collection and stored at −80° C until analysis.

About 1–5 g adipose tissue were dissected from each depot during regular endoscopic surgery. Adipose tissue pieces were immediately frozen on dry ice and stored at −80 °C until further analysis.

ADMA and its precursor were measured simultaneously in plasma and in 1-μL aliquots of MD samples by a specific and sensitive GC-MS/MS (gas chromatography-tandem mass spectrometry) method [36]. Quantification was performed by selected-reaction monitoring of the mass transition m/z 634 → m/z 378 for ADMA and m/z 637 → m/z 378 for the internal standard trideuteromethyl-ADMA in the negative-ion chemical ionization mode. Besides ADMA, in vivo MD samples were analyzed for glucose and urea concentrations using the automated enzyme-linked spectrophotometric CMA 600 analyzer (CMA, Solna, Sweden) [37]. Ethanol concentration was measured using the standard enzymatic assay with alcohol dehydrogenase (Sigma-Aldrich, Seelze, Germany) and a plate reader (Tecan, Infinite F200, Männedorf, Switzerland) as described before [38]. Changes in local blood flow were determined using both the ethanol escape technique, and by urea clearance [39,40].
DDAH activity was assessed in adipose tissue and, as a positive control, in mice liver tissue. A GC-MS (gas chromatography-mass spectrometry) assay was applied as described previously [34]. The method is based on the quantitative determination of ADMA-derived dimethylamine (DMA). Quantification was performed by selected-ion monitoring of the ions m/z 240 for DMA and m/z 246 for the internal standard hexadeutero-DMA in the negative-ion chemical ionization mode.

Data are shown as mean and standard error. Group comparison was done with Students t-test for paired or unpaired samples, as appropriate. p < 0.05 was considered to be statistically significant.

We have adapted a sensitive analytical method to measure tissue interstitial ADMA concentrations in microdialysis samples in a clinical setting. In our study, carried out in a limited number of subjects, acute changes in tissue ADMA concentrations following glucose intake were not observed. DDAH activity, both in subcutaneous and visceral adipose tissue, was extremely low compared to liver tissue. Further studies are warranted to establish the role of interstitial ADMA for the regulation of adipose tissue metabolism. However, we believe that the suggestion of ADMA playing a major role in adipose blood flow regulation can be rejected.

The laboratory assistance of Bibiana Beckmann, Anja Mitschke and Maria-Theresia Suchy is gratefully acknowledged. We thank Frank Gutzki for performing GC-MS/MS analyses of ADMA in blood and microdialysate samples and GC-MS analyses of DMA in tissue.
Publication costs are funded by the support Program “open access publication” of the Deutsche Forschungsgemeinschaft. The funders had no role in study design, data collection and analysis, decision to publish, or preparation of the manuscript. 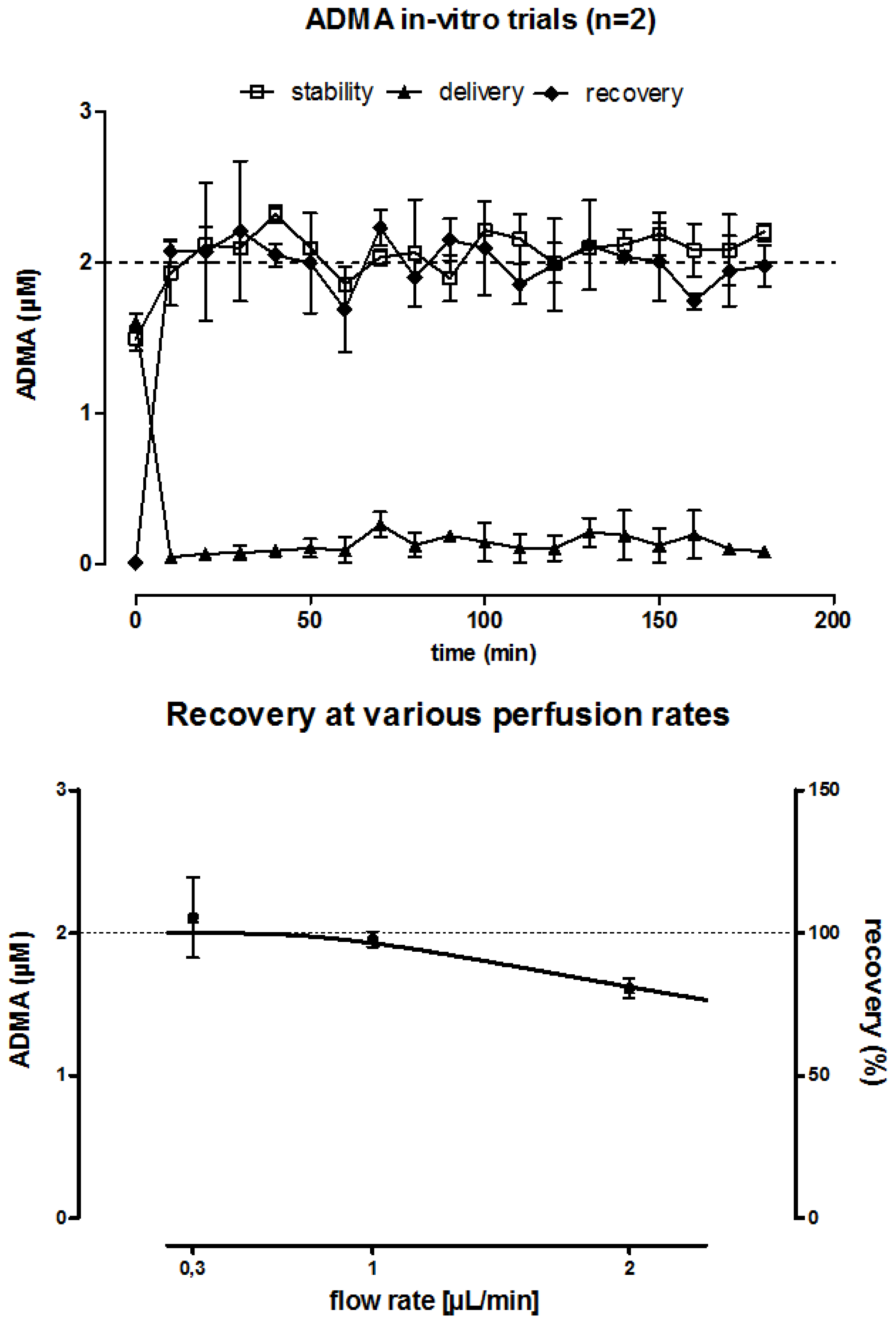 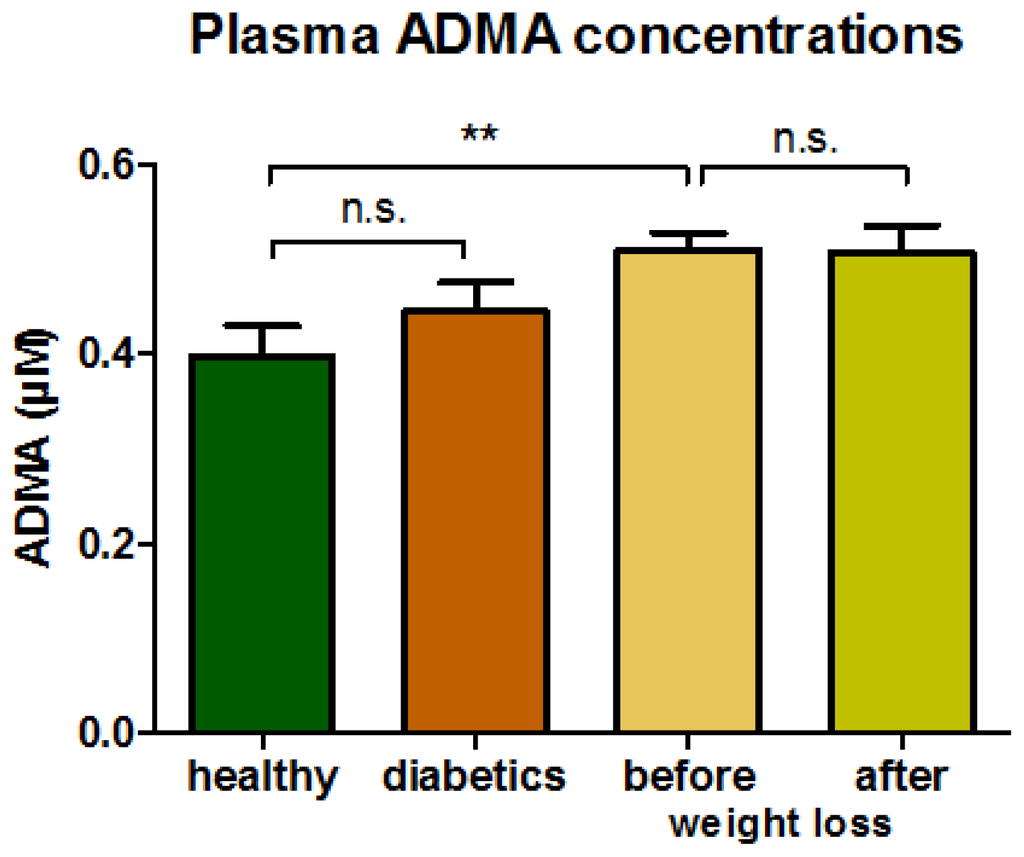 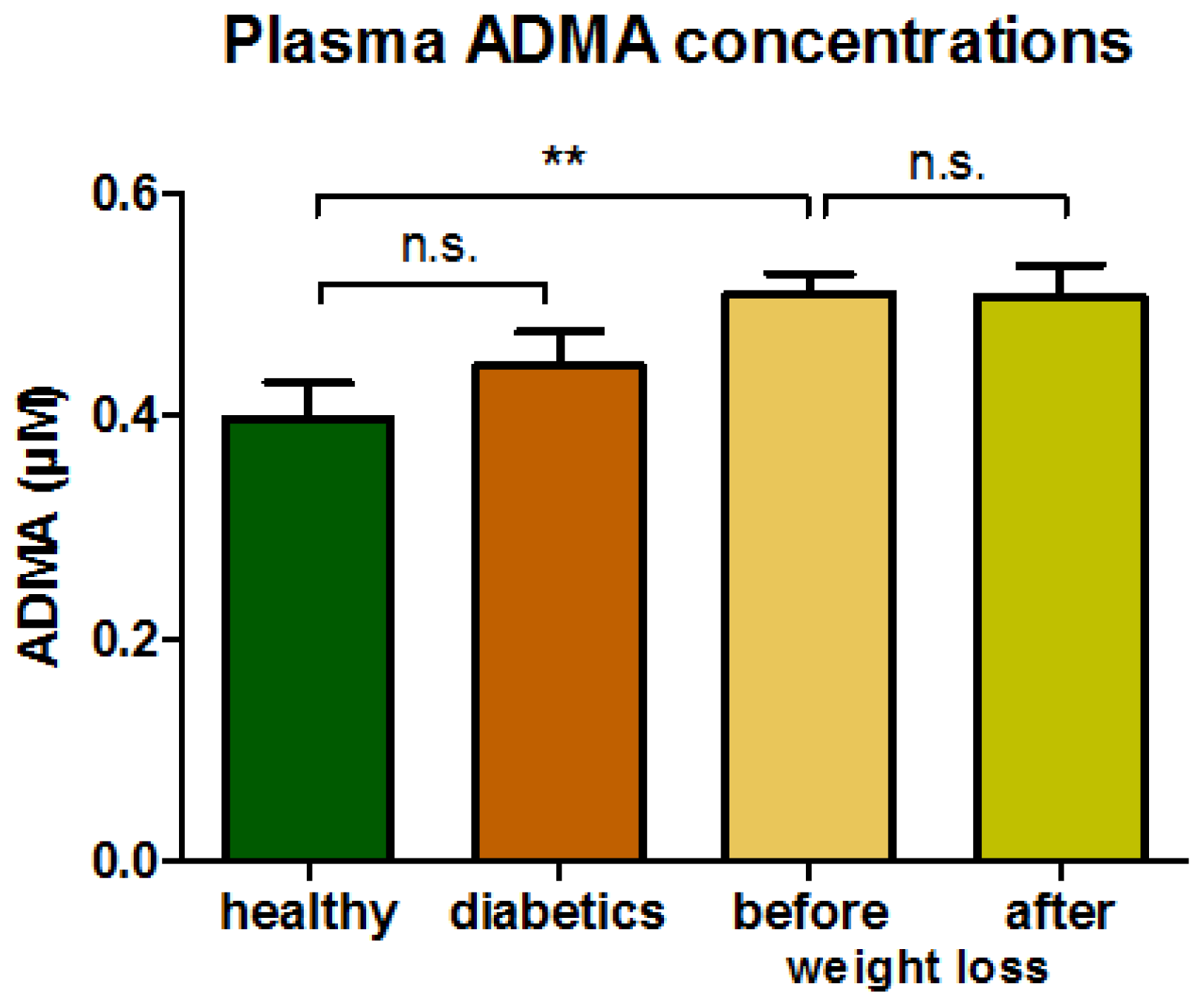 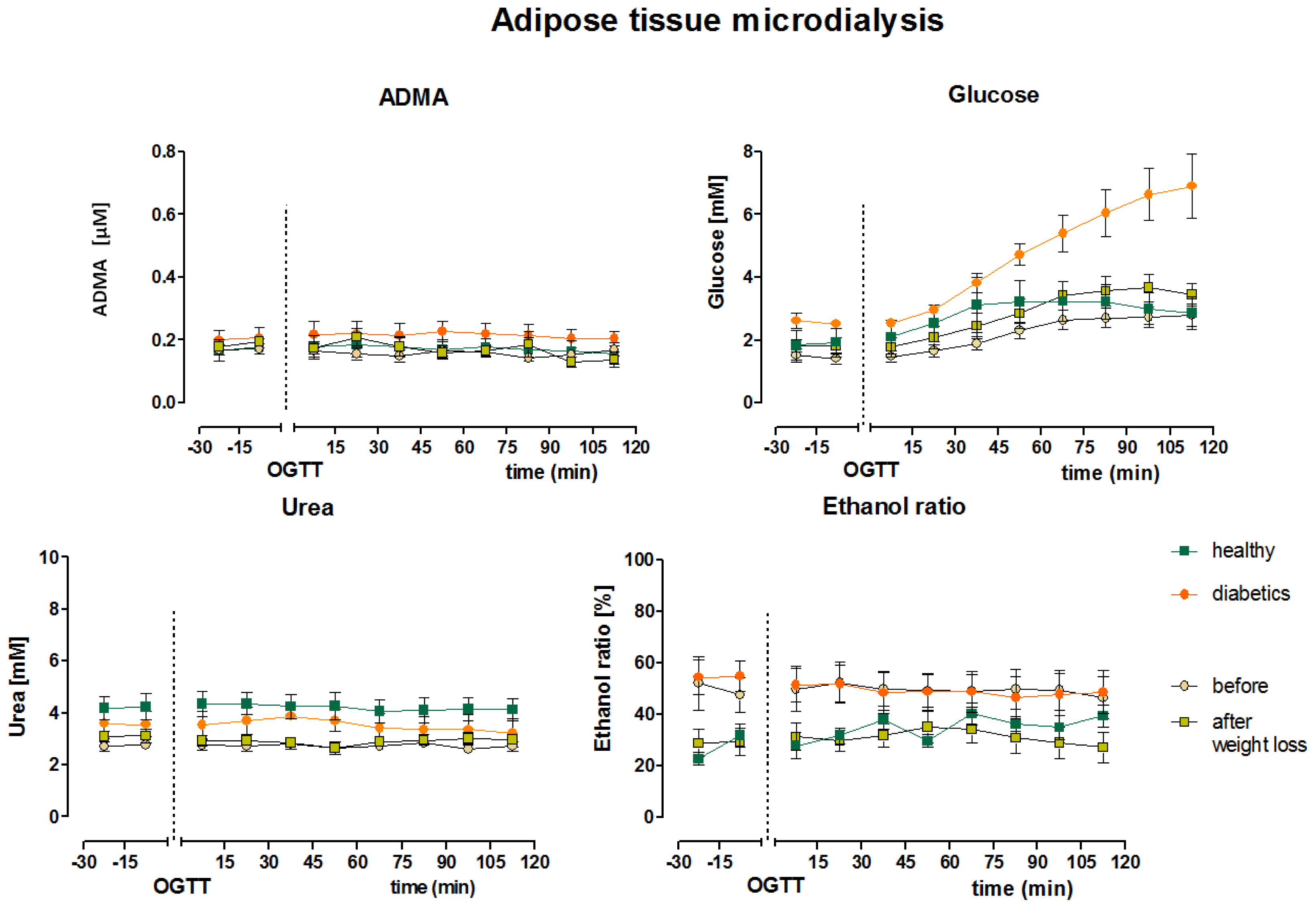 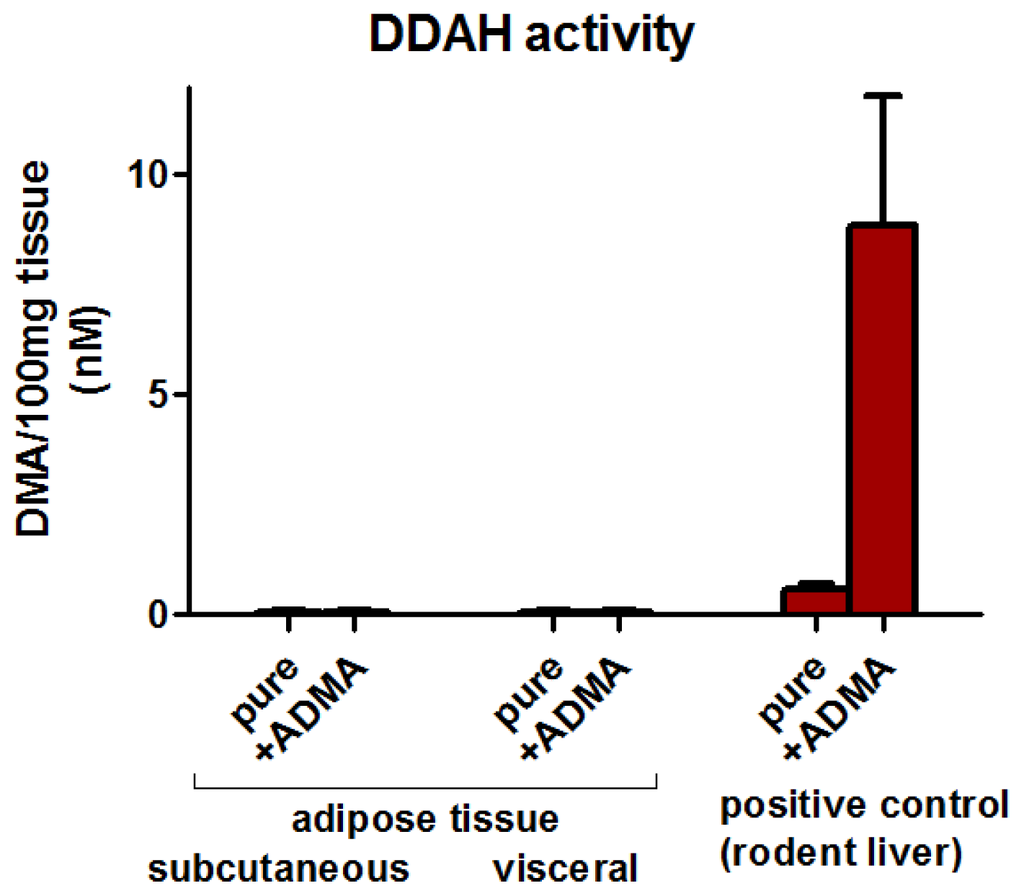