Poly(ADP-ribose)polymerase-1 (PARP1) is a nuclear protein implicated in DNA repair, recombination, replication, and chromatin remodeling. The aim of this study was to evaluate possible differences between PARP1−/− and wild-type mice regarding induction and repair of DNA lesions in irradiated male germ cells. Comet assay was applied to detect DNA damage in testicular cells immediately, and two hours after 4 Gy X-ray irradiation. A similar level of spontaneous and radiation-induced DNA damage was observed in PARP1−/− and wild-type mice. Conversely, two hours after irradiation, a significant level of residual damage was observed in PARP1−/− cells only. This finding was particularly evident in round spermatids. To evaluate if PARP1 had also a role in the dynamics of H2AX phosphorylation in round spermatids, in which γ-H2AX foci had been shown to persist after completion of DNA repair, we carried out a parallel analysis of γ-H2AX foci at 0.5, 2, and 48 h after irradiation in wild-type and PARP1−/− mice. No evidence was obtained of an effect of PARP1 depletion on H2AX phosphorylation induction and removal. Our results suggest that, in round spermatids, under the tested experimental conditions, PARP1 has a role in radiation-induced DNA damage repair rather than in long-term chromatin modifications signaled by phosphorylated H2AX.
Keywords: poly(ADP-ribose)polymerase-1; DNA repair; male mouse germ cells; comet assay; H2AX phosphorylation; ionizing radiation poly(ADP-ribose)polymerase-1; DNA repair; male mouse germ cells; comet assay; H2AX phosphorylation; ionizing radiation

The maintenance of DNA integrity in the paternal genome is of utmost importance for reproduction and it is well known that DNA lesions in germ cells can be transmitted to the next generation [1]. Germ cells need efficient systems to repair DNA damage to prevent inheritable mutations. Differences have been observed among DNA repair pathways in somatic and male germ cells, in which the expression or the presence of some DNA repair proteins depends on the phase of germ cell development [2–9].
Poly(ADP-ribose)polymerase-1 (PARP1) is one of the members of a family of nuclear proteins involved in several cellular processes like DNA repair, replication and transcription, chromatin structure, and intracellular calcium signaling, and is critical for the long-term maintenance of genomic stability [10]. Activation of PARP1 is one of the immediate responses of eukaryotic cells to DNA damage. It recognizes DNA strand breaks and, at the site of breakage, catalyzes the transfer of the ADP-ribose moiety from the respiratory co-enzyme NAD+ to nuclear protein acceptors [11,12]. PARP1 signals the presence of DNA lesions to downstream effectors involved in coordinating the cellular response to DNA damage, recruits repair enzymes to the damaged sites, and affects chromatin structure to allow repair factors to access DNA lesions [11,13–15]. PARP1 has been involved in the repair of various types of DNA lesions by multiple pathways [15]. The role of this enzyme and other PARP family members in DNA repair processes has been extensively studied in somatic cells, both using chemical inhibitors and mouse and cellular models genetically defective for the enzymes [13,16–24]. These studies show that inhibition or lack of PARP slows down DNA repair and increase the cytotoxicity of ionizing radiation and alkylating agents. The contribution of PARP1 to DNA repair in male germ cells has been considerably less investigated. It is known that germinal cells are characterized by a high expression level of PARP [25] and difference among testis cell subpopulations in PARP activity and production of ADP-ribose polymers was also observed [26–30]. In male germ cells poly(ADP ribose) metabolism is important for the regulation of meiotic process and seems to have a role in DNA repair and chromatin remodeling in post-meiotic cells [27,28,30–32]. A delay of radiation-induced DNA damage repair was shown in cultured rat spermatocytes and spermatids [25], and mouse spermatids in vivo [3] when poly(ADP ribose) metabolism was inhibited by chemical treatment. These studies left unanswered the question of the specific role of PARP1 in the germ cell DNA damage response because of the poor specificity of chemical inhibitors towards different PARP family members [25].
PARP1 knockout mice have been produced to investigate the specific role of PARP1 in cellular processes [24]. PARP1−/− mice are more sensitive to the lethal effects of alkylating agents and ionizing radiation, show an increased frequency of spontaneous sister chromatid exchanges in bone marrow cells and increased levels of chromatid and chromosome aberrations after exposure to genotoxic agents [24,33–35]. Although their fertility is not compromised, more subtle effects on the germ cell DNA damage response in these mice cannot be excluded. To our knowledge, no studies have been published so far to evaluate male germ cell capability of PARP1−/− mice to repair induced DNA damage.
In this study, alkaline comet assay has been applied to evaluate the level of basal and X-ray induced DNA lesions in testis cells from wild-type (WT) and PARP1−/− mice. In addition, to investigate the role of PARP1 in DNA repair in male germ cells, DNA damage was assessed at different times after irradiation. Exploiting the capacity of comet assay to identify DNA lesions in individual cells versus their ploidy [9,36], we evaluated the response to irradiation of different testis cell subpopulations. Post-meiotic early spermatids were the most affected by lack of PARP1. So, in these cells the induction of double strand breaks (DSB) was also specifically investigated by γ-H2AX immunolabeling. Finally, the persistence of γ-H2AX foci after DNA repair was evaluated to assess the role of PARP1 in long-lasting chromatin remodeling [37].

Male C57Bl mice aged 12–14 weeks were obtained from Harlan (Udine, Italy); PARP1−/− mice were bred at ENEA from founders received from P. de Boer (Nijmegen, The Netherlands) upon licence of G. de Murcia (Strasbourg, France). Animals were maintained under standard conditions (20–22 °C, 60% relative humidity, on a 12 h light/dark cycle, with chlorinated water and feed ad libitum). All experimental protocols were reviewed and approved by the Institutional Animal Care and Use Committee.

Mice were anaesthetized with Avertin (Sigma Aldrich St. Louis, MO, USA) diluted at 2.5% in sterile saline solution given intraperitoneally at a dose of 10 μL/g b.w. and only the testes region was irradiated with 4 Gy X-rays, the remainder of the body was shielded by 1-mm thick lead shield. Irradiation was carried out with a Gilardoni X-ray machine (15 mA, 250 kV; dose-rate 0.96 Gy/min). At different times after irradiation, mice were sacrificed and testes were removed and minced to obtain cellular suspensions to be analyzed.

Alkaline comet assay (pH > 13) was performed on testis cells from control mice and mice irradiated with 4 Gy and sacrificed immediately, 2 or 48 h after irradiation. At least four wild type (WT) and four PARP1−/− mice were used per experimental point. One testis from each mouse was minced and the cell suspensions were filtered through a 70 μm nylon mesh, centrifuged, resuspended in PBS (approximately 107 cells/mL), and mixed with low-melting point agarose (Bio-Rad, Hercules, CA, USA) to prepare slides for comet assay.
Alkaline comet assay was performed as described by Singh et al. [56] with minor modification [36]. Immediately before scoring, slides were stained with 12 μg/mL ethidium bromide (Sigma-Aldrich, St. Louis, MO, USA) and examined, at 200× magnification, with an Olympus fluorescence microscope. Slides were analyzed by a computerized image analysis system (Delta Sistemi, Rome, Italy). To evaluate the amount of DNA damage, computer generated fraction tail DNA values were used. Two-hundred cells were scored for each mouse from two different slides. Elongated spermatids, morphologically recognized, were not included in DNA damage analysis because our standard conditions failed to decondense their compact chromatin. Furthermore, the integral fluorescence intensity of each comet was taken as a measure of DNA content and used to discriminate cells with different DNA content [40]. The procedure to assign cells to the various subpopulations was adapted from the method previously described by Zheng and Olive [9]. In particular, cells were classified as haploid spermatids on the basis of DNA content distribution histograms and morphology; this subpopulation is defined “round spermatids” in the manuscript, although it is rather broad and includes different maturation stages from early round spermatids up to the elongating ones. Somatic and germinal cells, were considered 2C if their total fluorescence was comprised between one standard deviation minus and one standard deviation plus twice the mean haploid cell value. Cells with total fluorescence higher than double fluorescence of 2C cells were considered 4C. Cells included between 2C and 4C populations were considered S-phase cells. A representative histogram of relative fluorescence intensity obtained from a control sample is reported in Figure 3A and compared with the DNA distribution histogram obtained by flow cytometry on the same sample (Figure 3B).

Immunofluorescent analysis of H2AX histone phosphorylation was performed on round spermatids in groups of 4 PARP1−/− and 4 WT mice irradiated with 4 Gy X-rays and sacrificed 30 min, 2 h or 48 h later. Four unirradiated mice of each line were used as matched controls. Testis cell suspensions in PBS were mechanically prepared and filtered through 70 μm nylon mesh. The suspensions were fixed in 70% ethanol and diluted to a concentration of approximately 4 × 105 total cells/mL. Cells were cytospun onto slides (10 min, 600 rpm), air-dried, and re-fixed for 30 min in 2% paraformaldehyde in PBS. After 3 rinses in 0.05% Triton-X100 in PBS (TBS), slides were blocked in 5% nonfat dry milk in TBS for 1 h at 37 °C and incubated overnight at 4 °C with mouse monoclonal anti-γ-H2AX antibody (Upstate Biotechnology, Lake Placid, NY, USA) diluted 1:1000 in 10% goat serum, 5% nonfat dry milk in TBS. Slides were then washed 3 times in PBS, blocked in 5% nonfat dry milk in PBS for 30 min at 37 °C and finally incubated for 2 h at 37 °C with Alexa 488-conjugated goat antimouse IgG (Molecular Probes, Eugene OR, USA) diluted 1:2000 in 10% goat serum, 5% nonfat dry milk in PBS. Slides were rinsed in PBS and mounted in Vectashield mounting medium with DAPI (Vector Laboratories Inc., Burlingame, CA, USA).
Slides were viewed under 1000× magnification using an Olympus fluorescence microscope (Olymphus Optical co. Tokyo, Japan) equipped with CCD camera. Round spermatids were identified by their morphology according to Mahadevaiah et al. [41]. At 0.5 and 2 h post-irradiation time points there were tens of small foci on multiple focal planes and it was not possible to reliably count their number. For this reason, spermatids were simply classified in γ-H2AX positive and γ-H2AX negative (Figure 6). At 48 h after irradiation, few large countable foci were observed in positive cells, and their average number was also determined. At least 100 spermatids were analyzed per mouse.

Individual mouse data were considered the experimental unit. Mean values and standard errors relative to each homogeneous group were calculated. Statistical analysis was performed using STATISTICA software (StatSoft, Inc., Tulsa, OK, USA). Comparison between group means was performed by one-way ANOVA, and Duncan’s test was used for post hoc comparisons. Differences were considered due to the treatment when their probability level was lower than 5%.

In summary, our results suggest that in round spermatids lack of PARP1 delays the repair of radiation-induced DNA damage, whereas it does not seem to affect H2AX phosphorylation dynamics signaling double strand breaks or post-repair chromatin modifications. Additional experiments could clarify if these conclusions could be extended also to the radiation response of round spermatids in the low-dose range. 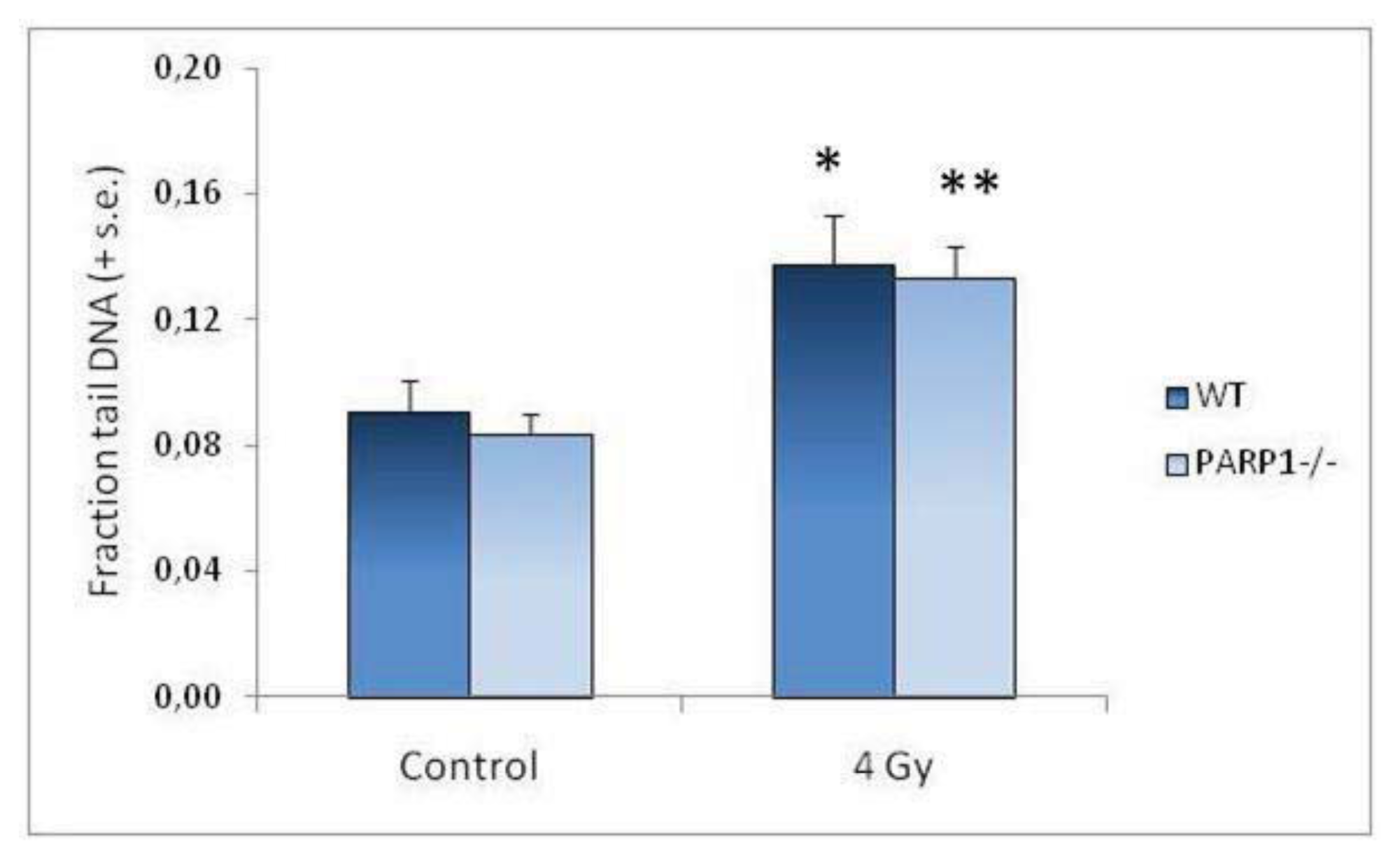 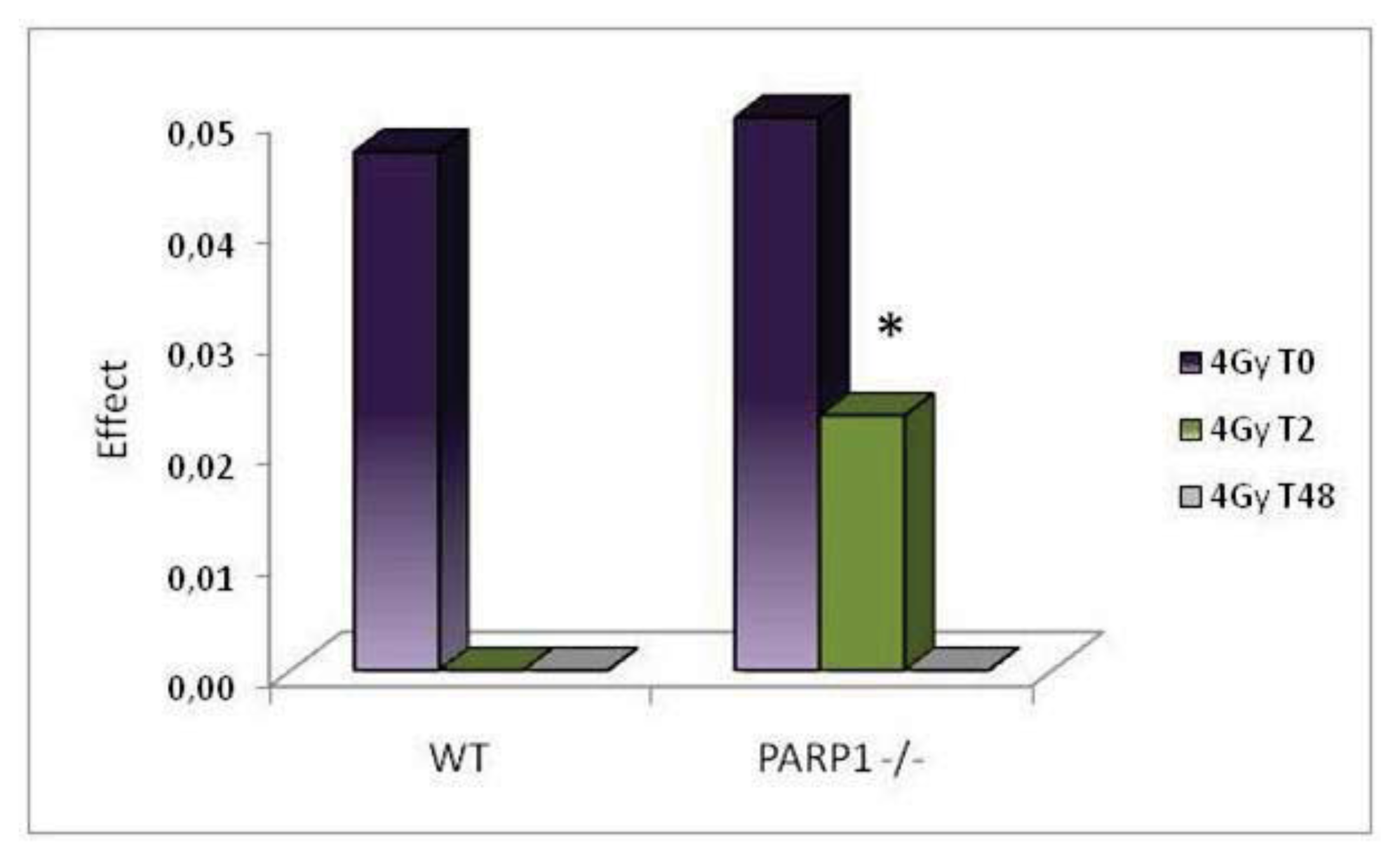 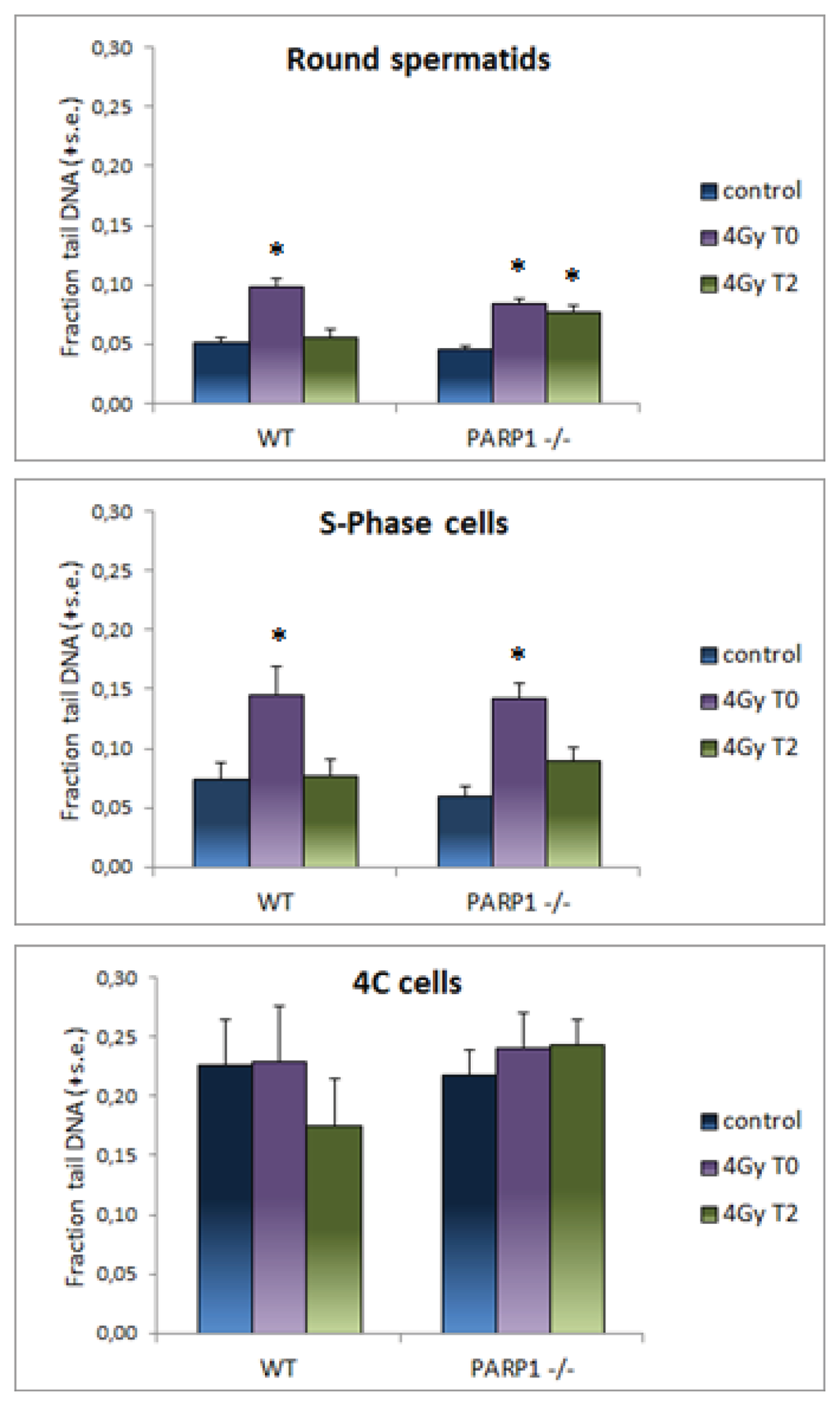 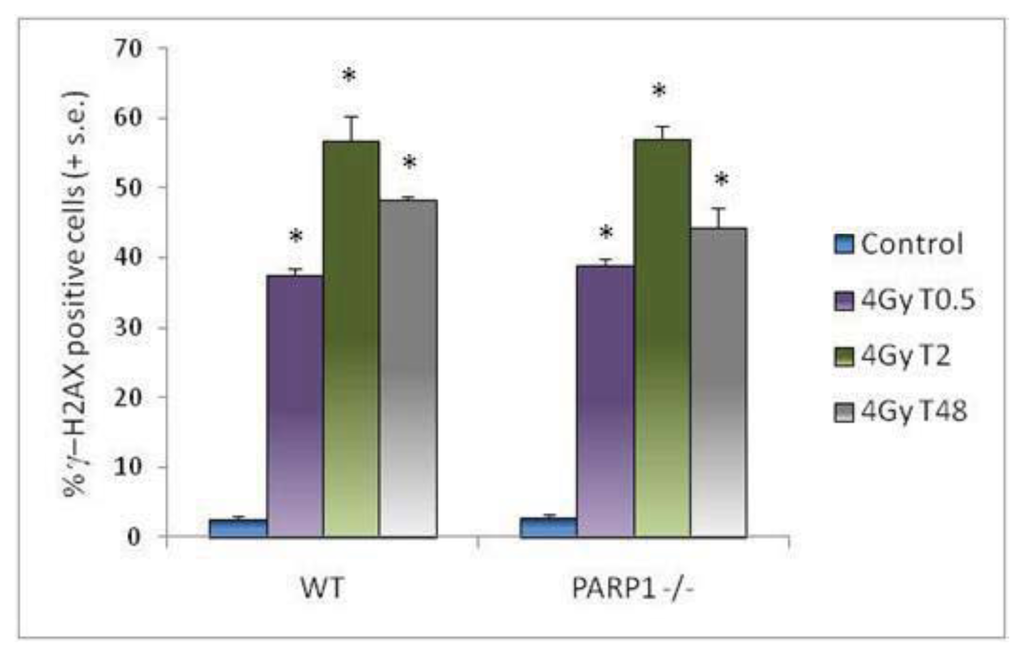 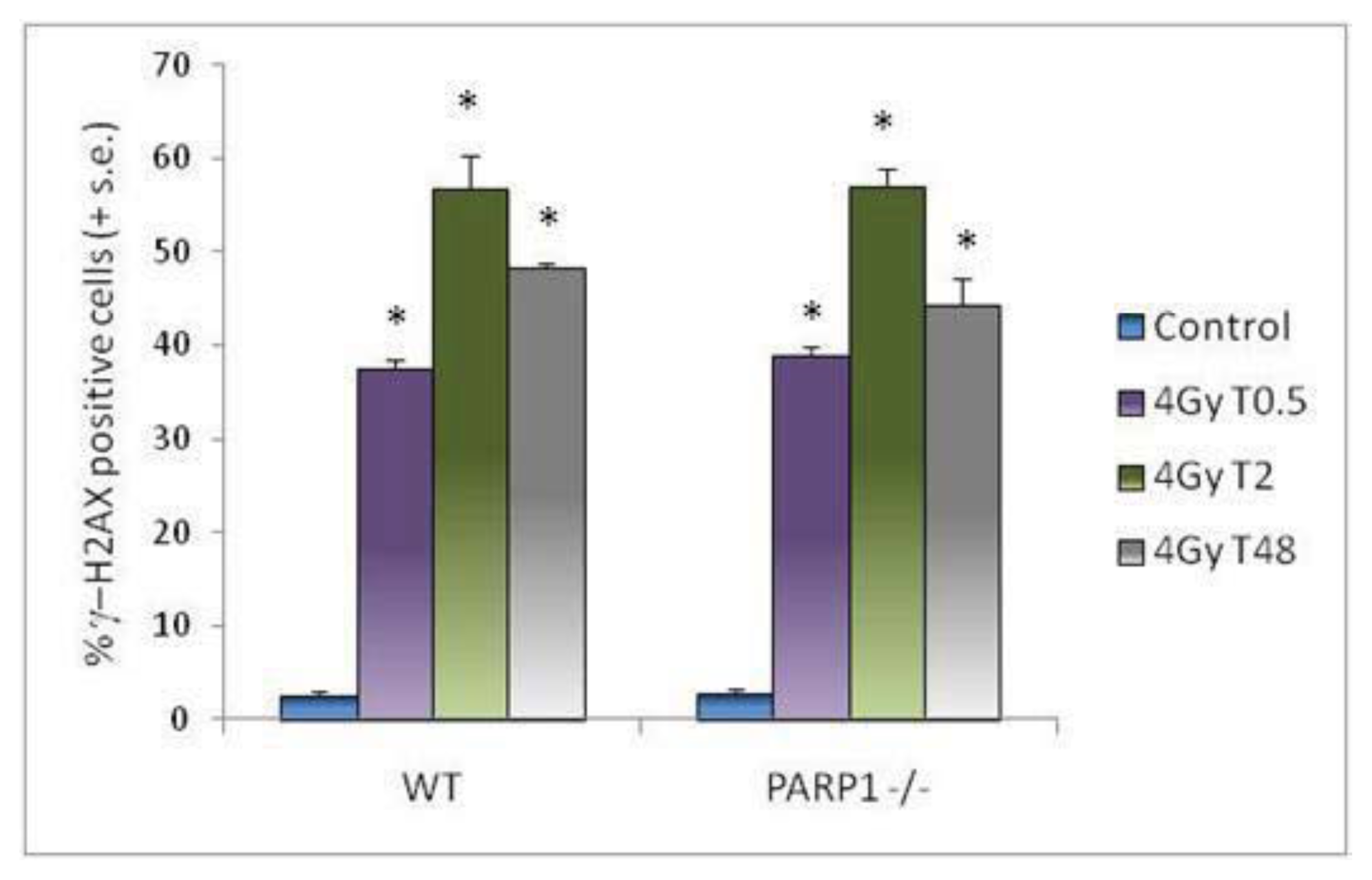 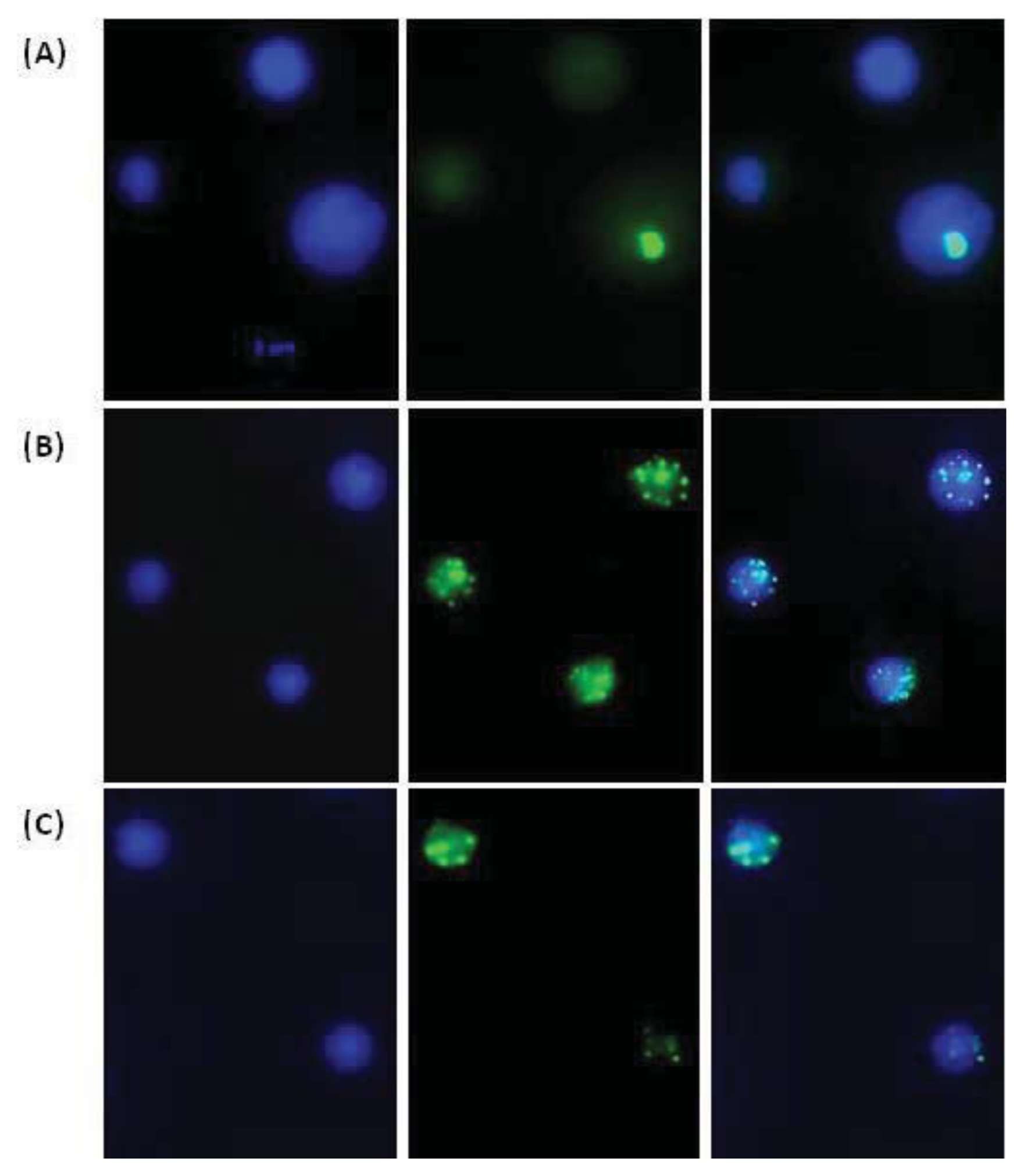