Functional and Molecular Changes of the Bladder in Rats with Crushing Injury of Nerve Bundles from Major Pelvic Ganglion to the Bladder: Role of RhoA/Rho Kinase Pathway
Previous Article in Special Issue

Cytogenetic Abnormalities in Lymphocytes from Victims Exposed to Cobalt-60 Radiation

The present study investigates cytogenetic damage in lymphocytes, derived from three victims who were unfortunately exposed to cobalt-60 (60Co) radiation (the 1999 accident occurred in a village in China’s Henan province). Case A of the three victims was exposed to a higher dose of 60Co radiation than Cases B and C. The chromosomal aberrations, cytokinesis-block micronucleus (CBMN, the CBMN assay), and DNA double-strand breaks (DSBs, the comet assay) examined in this study are biomarkers for cytogenetic abnormalities. After the lymphocytes collected from the victims were cultured, the frequencies of dicentric chromosomes and rings (dic + r) and CBMN in the first mitotic division detected in the lymphocytes of Case A were found to be substantially higher than in Cases B and C. Similarly, the DNA-DSB level found in the peripheral blood collected from Case A was much higher than those of Cases B and C. These results suggest that an acutely enhanced induction of the 60Co-induced cytogenetic abnormality frequency in humans depends on the dose of 60Co radiation. This finding is supported by the data obtained using practical techniques to evaluate early lymphoid-tissue abnormalities induced after exposure to acute radiation. View Full-Text
Keywords: radiation accident; chromosome aberration; micronucleus assay; comet assay; DNA-DSB radiation accident; chromosome aberration; micronucleus assay; comet assay; DNA-DSB
►▼ Show Figures 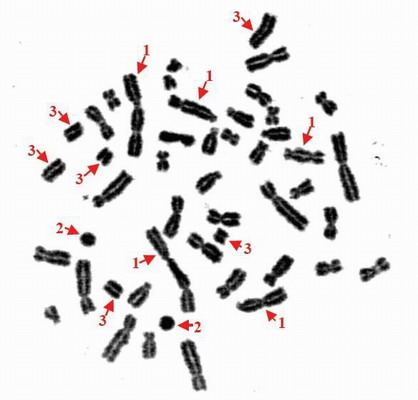