Quorum Sensing in the Squid-Vibrio Symbiosis

Cell signaling plays an important role in the survival of bacterial colonies. They use small molecules to coordinate gene expression in a cell density dependent manner. This process, known as quorum sensing, helps bacteria regulate diverse functions such as bioluminescence, biofilm formation and virulence. In Vibrio harveyi, a bioluminescent marine bacterium, four parallel quorum-sensing systems have been identified to regulate light production. We have previously reported that nitric oxide (NO), through the H-NOX/HqsK quorum sensing pathway contributes to light production in V. harveyi through the LuxU/LuxO/LuxR quorum sensing pathway. In this study, we show that nitric oxide (NO) also regulates flagellar production and enhances biofilm formation. Our data suggest that V. harveyi is capable of switching between lifestyles to be able to adapt to changes in the environment.
Keywords: nitric oxide; biofilm; quorum sensing; flagella; bacterial motility; H-NOX nitric oxide; biofilm; quorum sensing; flagella; bacterial motility; H-NOX

Most bacteria are capable of switching between a free-swimming, solitary, planktonic growth mode and sessile, biofilm living [1]. Biofilms are communities of surface-associated bacteria that form a complex, yet ordered, three-dimensional structure encapsulated in a self-secreted extracellular polysaccharide matrix (EPS). Members of a biofilm community have advantages such as access to nutrients, resistance to antimicrobial agents and protection against predators [2–4]. Biofilm formation is associated with quorum sensing (QS). Quorum sensing refers to the process by which bacteria coordinate social behaviors by secreting, detecting and responding to small molecules called autoinducers (AI) [5]. The sequential steps involved in biofilm formation require regulation of many genes across the bacterial community [1]; thus, efficient communication is required. To achieve this remarkable feat, bacteria send out signals as soon as they enter the confines of the biofilm, since proximity to each other makes it more feasible for bacteria to communicate with one another and engage in the maintenance of the well being of the community [5].
Vibrio harveyi is widely studied as a model bacterium for understanding quorum sensing. V. harveyi are well understood to regulate the gene expression of community behaviors such as bioluminescence and virulence gene production using QS circuits [6–8]. Furthermore, V. harveyi, are known to exist as free-swimming single cells, attached to abiotic surfaces as a biofilm, and in association with a host as a pathogen of marine animals [9]. Although it has been shown that V. harveyi can switch between these lifestyles, limited information is available about biofilm formation in V. harveyi, and there are even fewer studies that correlate QS and biofilm formation.
V. harveyi have (at least) four parallel quorum sensing sensor-kinases, each of which responds to detection of its cognate AI by a change in kinase activity [10]. Each of these kinases contributes to regulating the phosphorylation state of a common phosphorelay protein called LuxU [10,11]. LuxU transfers phosphate to and from LuxO [12], a transcriptional regulator that controls the expression of LuxR, and ultimately, the quorum sensing response. We previously reported that one of the four known QS pathways responds to nitric oxide (NO) through the H-NOX/HqsK (heme-nitric oxide/oxygen binding domain; H-NOX-associated quorum sensing kinase) sensor/kinase pair [10]. We have shown that NO acts analogously with the other AIs and positively regulates light production.
Several studies have shown that LuxR and its homologues indirectly regulate biofilm formation through QS. Genetic studies done on V. parahaemolyticus, V. vulnificus and V. fischeri reveal that QS positively regulates biofilm formation [13,14] through OpaR, SmcR, and LitR [15] (homologs of V. harveyi LuxR), respectively. An opposite regulation is observed in V. cholerae where vibrio polysaccharide (VPS, equivalent of EPS) gene expression is more abundant in the absence of HapR (LuxR homolog in V. cholerae), indicating a negative regulation of biofilm formation [16–18]. The ecological importance of this regulation in V. cholerae is still being investigated, but it has been suggested that being able to detach from the community is important in the transmission, colonization, and persistence of the next generation. Moreover, in a genetic study, luxR, expressed as a function of AI concentration, is shown to negatively regulate the expression of flagellar operons in V. harveyi [19,20]. A single polar flagellum provides bacteria an effective means of motility. In the initial stages of biofilm formation in Vibrio, attachment to a surface has been shown to involve the loss of flagellar genes [21]. Thus a loss of the flagellum is predicted to upregulate biofilm formation.
Interestingly, NO is well known to be involved in biofilm formation. Indeed, in many bacterial species such as Shewanella woodyi [22], Shewanella oneidensis [23], and Legionella pneumophila [24], NO is detected by H-NOX, which goes onto regulate biofilm formation through a pathway involving cyclic-di-GMP metabolism. Cyclic-di-GMP is a second messenger widely used by bacteria to regulate biofilm formation and EPS production [25,26]. In these systems, NO is sensed by H-NOX and ultimately regulates the activities of a diguanylate cyclase and/or phosphodiesterase, either directly [22,24], or indirectly through a histidine kinase [23], to control the intracellular concentration of cyclic-di-GMP.
In Pseudomonas aeruginosa, NO causes QS-mediated biofilm dispersal [27]. Thus we hypothesized that NO/H-NOX might contribute to regulation of biofilm formation through QS in V. harveyi. Here, using genetic, biofilm, and proteomic data, we demonstrate that NO/H-NOX regulates biofilm and flagellar formation in V. harveyi.

Microscopy images were recorded on a Zeiss LSM 510 Metanlo Two-Photon Laser Scanning Confocal Microscope System (Carl Zeiss, Jena, Germany). An overnight culture of V. harveyi in marine media was diluted (1:1000) into fresh medium in a sterile 50 mL conical centrifuge tube containing a glass microscope slide. The medium also contained various concentrations of DPTA NONOate that had been predecayed for 3 h at 30 °C, resulting in 0, 50, 100, and 200 nM NO in solution, as measured by a Sievers nitric oxide analyzer (NOA 280i, GE analytical instruments, Boulder, CO, USA). Biofilms were grown under static conditions at 30 °C with slow agitation at 50 rpm for 12 h. Following the growth period, the slide was thoroughly rinsed with distilled water and the adhered biofilm cells were stained for imaging. Samples were stained with the 1% calcoflour white for 15 min to stain and image EPS. Cells for confocal microscopy were stained with LIVE/DEAD BacLight kit (Invitrogen, Carlsbad, California) according to the manufacturer’s protocol, for 15 min. The biofilm formed at the air–liquid interface was then imaged and analyzed. The air–liquid interface was ~3 mm wide (in the X dimension, along the longest side of the microscope slide), as determined from crystal violet staining of identically obtained biofilms on microscope slides. The biofilm thickness (X−Z dimension, i.e., the height of the biofilm measured from the surface of the microscope slide to the top of the biofilm) was measured at three different locations in each experiment and averaged to determine the mean biofilm thickness. The locations were chosen randomly, but generally one spot near the middle of the slide and one from each edge of the slide (in the Y dimension) were chosen. Multiple locations were measured because bacterial biofilms are often not of uniform thickness. These measurements may not account for all the variation in biofilm thickness, but they provide an estimate of biofilm thickness for comparison between different NO concentrations. Confocal images for each of three completely independently grown biofilms exposed to each NO concentration were separately grown and analyzed. The mean thickness from each trial was determined from measurements at multiple locations. The mean thickness from three independent trials ± one standard deviation is reported.

Steady-state biofilm formation, at the air-liquid interface, in a shaking culture was examined in 96-well polyvinyl chloride (PVC) plates as previously described [22], with a few modifications. A 100 μL subculture (1:100 dilution of an overnight culture of V. harveyi) in marine media was incubated at 30 °C for 12 h with slow agitation (50 rpm). Some cultures included the addition of 50 nM NO (from NONOate) or cell-free medium from an overnight culture (contains a high concentration of AIs). The planktonic cells and media were then removed, and the remaining biofilm was rigorously washed with water followed by staining with 150 μL of 0.1% crystal violet (CV) in water for 15 min. Next the CV solution was removed, and the wells were rinsed three times with distilled water and allowed to thoroughly dry. Then 100 μL of DMSO was added to each well to solubilize the CV adsorbed by the biofilm cells. The DMSO/CV solution was removed from the PVC plate and added to a polystyrene 96-well plate, and the optical density at 570 nm was measured with a Perkin-Elmer Victor X5 multilabel reader (Perkin Elmer, Waltham, MA, USA). The data are reported as the CV absorbance at 570 nm divided by the optical density of the planktonic and biofilm cells at 600 nm. Each biofilm condition was run a minimum of 10 times in one experiment, and the entire experiment was independently performed a minimum of three times. The mean measurement ± one standard deviation from 3 independent experiments is reported.

In the natural environment, bacteria are often part of a multicultural community. They spend most of their time in social communes where they are covered with an EPS matrix that confers protection against environmental stress. Biofilm regulation is not well understood, although cyclic-di-GMP signaling and QS are known to play a role [39,40]. A global regulatory mechanism is needed to achieve biofilm formation because it involves the concomitant expression and repression of tens or even hundreds of unlinked genes in a cell-density dependent manner [41]. It appears that QS reciprocally influences cyclic-di-GMP signaling pathways, together providing an integrated network for assimilating numerous external stimuli into a community-wide response [42,43].
Our data suggest that, at low concentration, NO acts as a stimulus to promote V. harveyi biofilm formation. In several bacteria, NO/H-NOX regulates cyclic-di-GMP synthesis and/or hydrolysis to contribute to EPS production and biofilm regulation [22–24]. Here, we report QS-mediated biofilm formation through regulation of flagellar proteins via the H-NOX/HqsK pathway. It is interesting that all NO/H-NOX pathways characterized to date are involved in biofilm regulation, although the details of the signaling pathway appear to vary from organism to organism. These results serve as a starting point to study in detail the mechanism involved in formation of biofilms through QS. Biofilms involve community-wide changes in gene expression, and thus QS plays a critical role that is still being uncovered. 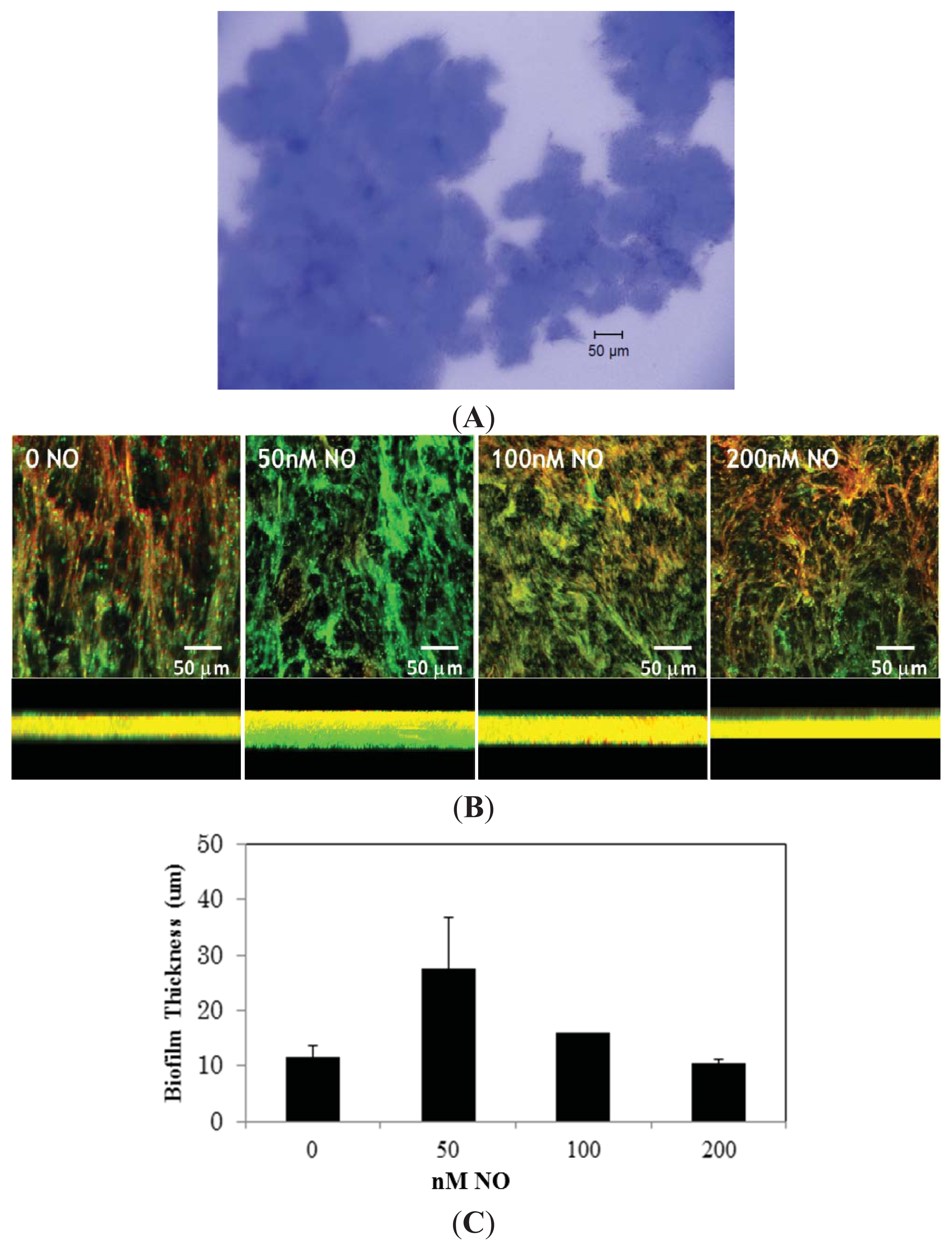 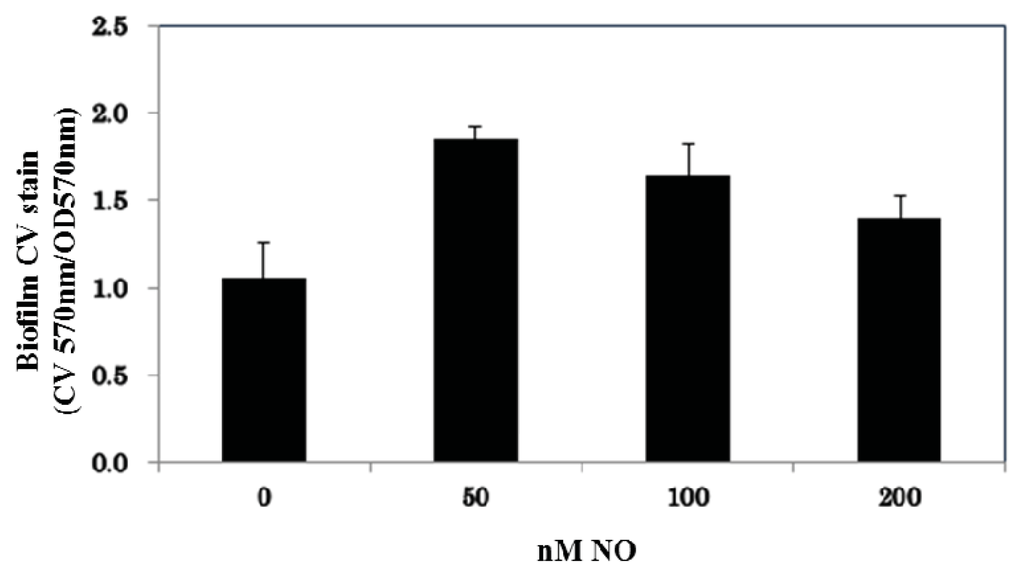 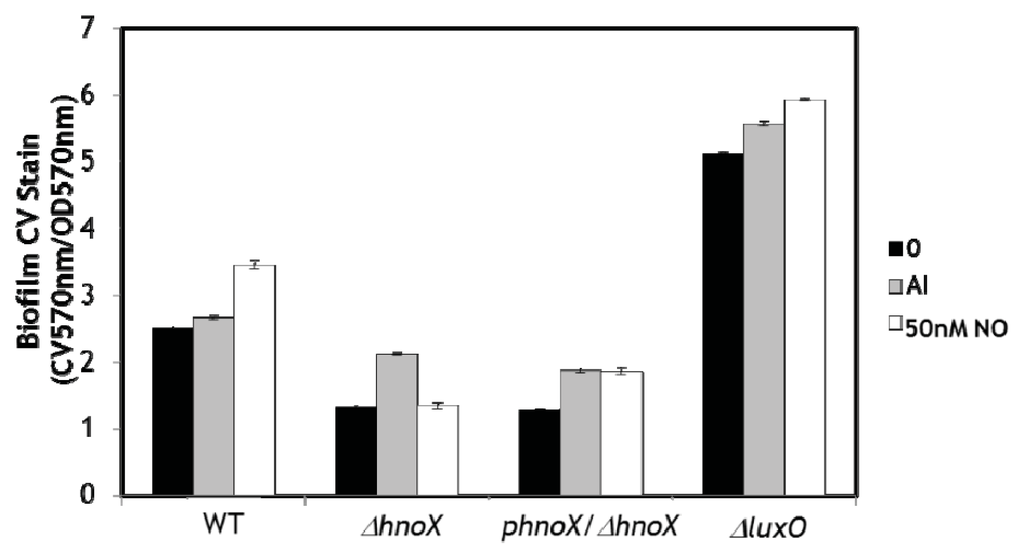 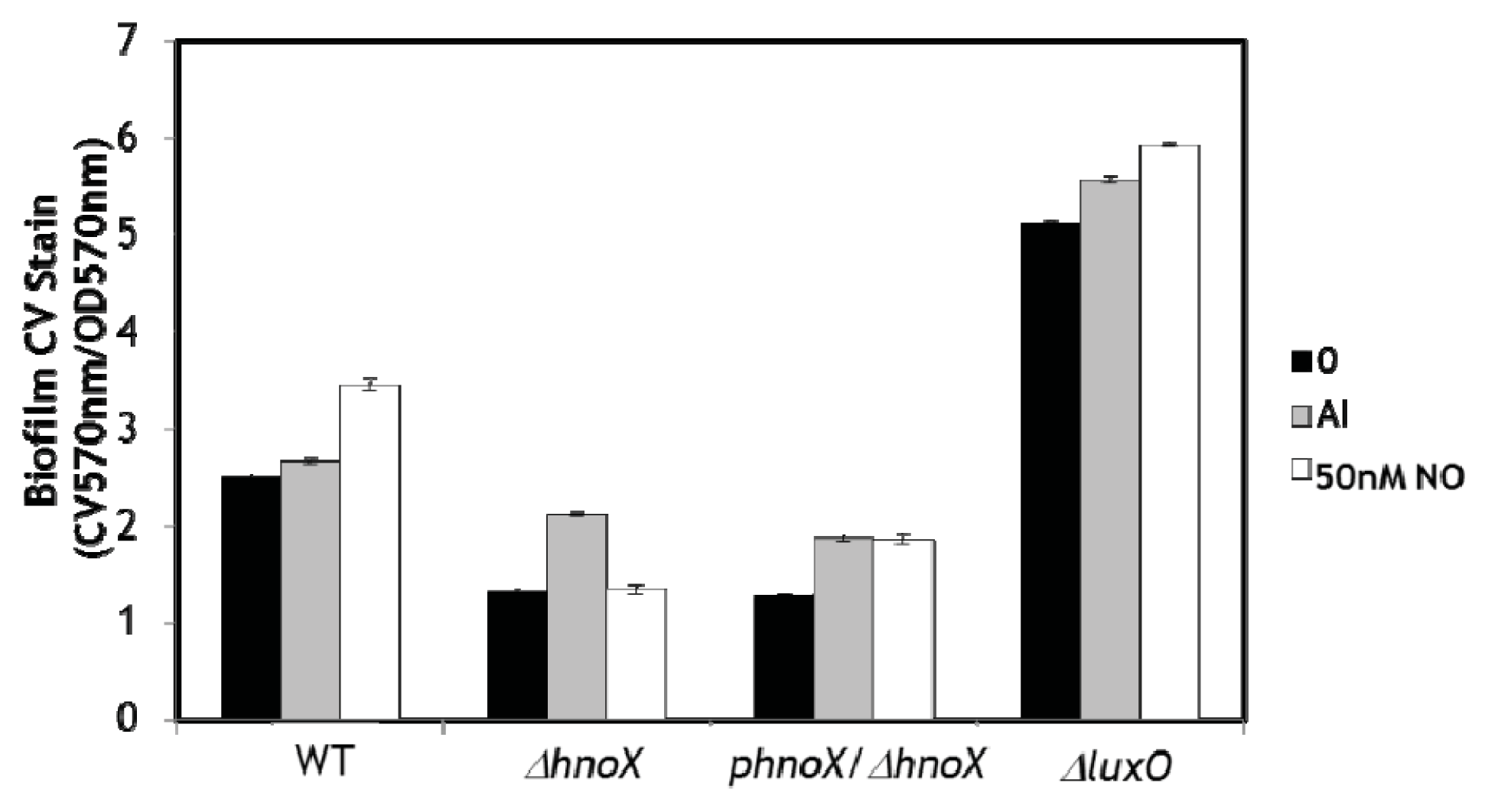