DNA Self-Assembly: From Chirality to Evolution

A common feature of biomineralization proteins is their self-assembly to produce a surface consistent in size with the inorganic crystals that they produce. Mms6, a small protein of 60 amino acids from Magnetospirillum magneticum strain AMB-1 that promotes the in vitro growth of superparamagnetic magnetite nanocrystals, assembles in aqueous solution to form spherical micelles that could be visualized by TEM and AFM. The results reported here are consistent with the view that the N and C-terminal domains interact with each other within one polypeptide chain and across protein units in the assembly. From studies to determine the amino acid residues important for self-assembly, we identified the unique GL repeat in the N-terminal domain with additional contributions from amino acids in other positions, throughout the molecule. Analysis by CD spectroscopy identified a structural change in the iron-binding C-terminal domain in the presence of Fe3+. A change in the intrinsic fluorescence of tryptophan in the N-terminal domain showed that this structural change is transmitted through the protein. Thus, self-assembly of Mms6 involves an interlaced structure of intra- and inter-molecular interactions that results in a coordinated structural change in the protein assembly with iron binding. View Full-Text
Keywords: Mms6; micelle; structural rearrangement Mms6; micelle; structural rearrangement
►▼ Show Figures 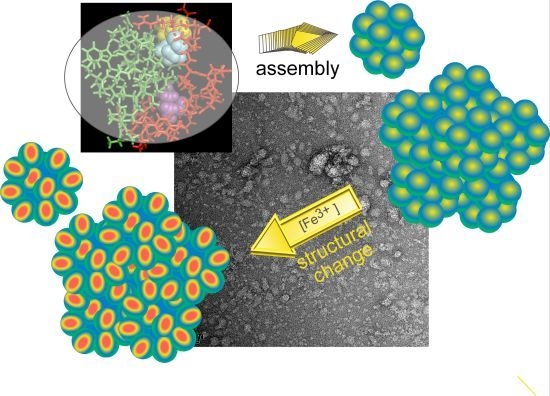