:
Caffeine is an alkaloid with a stimulant effect in the body. It can interfere in transmissions based on acetylcholine, epinephrine, norepinephrine, serotonin, dopamine and glutamate. Clinical studies indicate that it can be involved in the slowing of Alzheimer disease pathology and some other effects. The effects are not well understood. In the present work, we focused on the question whether caffeine can inhibit acetylcholinesterase (AChE) and/or, butyrylcholinesterase (BChE), the two enzymes participating in cholinergic neurotransmission. A standard Ellman test with human AChE and BChE was done for altering concentrations of caffeine. The test was supported by an in silico examination as well. Donepezil and tacrine were used as standards. In compliance with Dixon’s plot, caffeine was proved to be a non-competitive inhibitor of AChE and BChE. However, inhibition of BChE was quite weak, as the inhibition constant, Ki, was 13.9 ± 7.4 mol/L. Inhibition of AChE was more relevant, as Ki was found to be 175 ± 9 μmol/L. The predicted free energy of binding was −6.7 kcal/mol. The proposed binding orientation of caffeine can interact with Trp86, and it can be stabilize by Tyr337 in comparison to the smaller Ala328 in the case of human BChE; thus, it can explain the lower binding affinity of caffeine for BChE with reference to AChE. The biological relevance of the findings is discussed.
Keywords:
acetylcholinesterase; butyrylcholinesterase; caffeine; Alzheimer disease; myasthenia gravis; acetylcholine; inhibition; coffee; alkaloid; chocolate

In the body, two structurally close esterases with different functions can be found. While acetylcholinesterase (AChE) (EC 3.1.1.7.) is involved in the termination of neurotransmission, the role of butyrylcholinesterase (BChE) (EC 3.1.1.8.) is not understood. Acetylcholine is a low molecular weight neurotransmitter presented in both the central and peripheral nervous system. It is responsible for signal transmission from nerves to terminal glands and muscles. In the body, nicotinic (nAChR) and muscarinic acetylcholine receptors (mAChR) are present. The receptors are expressed in most tissues, and they can be found on leukocytes, endothelial cells, nerves and others [1–3]. AChE is an enzyme converting acetylcholine into choline and acetate. Neurotransmission is stopped by the AChE effect [4,5].
AChE is a target for many drugs and toxins. Organophosphorus pesticides, carbamate pesticides and nerve agents are examples of toxic compounds inhibiting AChE [6,7]. Huperzine and its derivative, ZT-1, donepezil, galantamine and rivastigmine can be mentioned as drugs for Alzheimer disease inhibiting AChE [8–10]. Compared to drugs for Alzheimer disease penetrating through the blood-brain barrier, drugs for myasthenia gravis, such as pyridostigmine and neostigmine, inhibit AChE in peripheral nerves [11,12]. BChE is not sensitive to all of the AChE inhibitors. Irreversible and pseudo-irreversible inhibitors represented by the aforementioned pesticides, nerve agents, rivastigmine, pyridostigmine and neostigmine have nearly equal affinity to AChE and BChE [4]. BChE does not have a simply defined role in the body. Drugs interacting with the cholinergic system are not focused on BChE for that reason. The enzyme can be found in many tissues, and the expression is not privileged to the closeness of nerves, like in the AChE case. Significant production of BChE can be found in the liver, from where the enzyme is released into the blood system, and it circulates in plasma in a level of 5 mg/mL [13,14].
Caffeine (shown in Figure 1) is a well-known plant alkaloid found in coffee beans from Coffea arabica, C. canephora and some other Coffea plants. It is known to be in tea leaves of Camellia sinensis as well. People typically accept caffeine from coffee, tea, energy and cola drinks. Besides the presence in the drinks, caffeine is used as a stimulant supplement and medical stimulant in combination with other compounds [15,16]. The caffeine’s stimulant effect is based on nonselective adenosine receptor antagonism [17]. However, the adenosine receptors are not the only targets of caffeine. It can meet acetylcholine-, epinephrine-, norepinephrine-, serotonin-, dopamine- and glutamate-mediated neurotransmission [18–22]. Phosphodiesterases inhibition and promotion of calcium release from intracellular stores can be attributed to caffeine, as well [23,24]. The implication in the acetylcholine-based neurotransmission is plausibly verified [25]. Caffeine regulatory potency in the body is an object of extensive research, and some of the caffeine related pathways probably remain unrevealed [26]. The present paper describes the search on caffeine potency to modulate the activity of cholinesterases, a crucial part of the cholinergic system. We try to answer the question whether caffeine can act via acetylcholine receptors only or whether it can be involved in the regulation of the neurotransmitter, acetylcholine, via cholinesterases.

Recombinant human BChE and recombinant human AChE were purchased from Sigma-Aldrich (Saint Louis, Missouri, USA). Both enzymes were received as a powder. The BChE had specific activity ≥500 μmol/min/mg of protein and AChE ≥1500 μmol/min/mg. Caffeine, tacrine and donepezil were purchased as analytical standards from Sigma-Aldrich. The other reagents were in a standard purity, and they were received from Sigma-Aldrich, as well.
Cholinesterases inhibition by the tested compounds was assayed using Ellman’s method based on 5,5′-dithiobis-(2-nitrobenzoic) acid as chromogen and, butyrylthiocholine chloride (for BChE) and acetylthiocholine chloride (for AChE) as substrates. The principle and protocol for the assay was published in the quoted papers [45–47]. In the assay, standard PS disposable cuvettes were used. The cuvette was gradually filled with 0.4 mL of 5,5′-dithiobis-(2-nitrobenzoic) acid 0.4 mg/mL, 100 μL of either BChE or AChE solution (1 × 10−9 kat for 1 mmol/L substrate and standard ambient temperature and pressure (SATP) conditions) in phosphate buffered saline (PBS; composition 137 mmol/L NaCl, 2.7 mmol/L KCl, 10 mmol/L Na2HPO4, 0.24 mmol/L KH2PO4, pH 7.4), 100 μL of the tested compound solution in PBS and 300 μL of PBS. The reaction was started by addition of butyrylthiocholine or acetylthiocholine chloride (100 μL). Five minutes after substrate injection to the cuvette, absorbance was measured at 412 nm. Enzyme activity was calculated using the extinction coefficient, ɛ = 14,150 L × mol−1 × cm−1. The coefficient was taken from the literature describing an experiment where the same assay conditions were used [48].

The first polypeptide chain from the crystal structure of human AChE with donepezil was taken for modeling (pdb code 4EY7) [28]. The water and other molecules were removed, and the molecular program, Sirius (version 1.2, Supercomputer Center, San Diego, CA, USA), was used for preparation of the complex AChE inhibitors. Further structures were modified using the AutoDockTools scripts in order to be docked by AutoDock Vina 1.1.2 [49] with default parameters, where the grid center was situated on the inhibitor, in compliance with the crystal structure, and the grid size was equal to 27 × 18 × 23 Å. The orientation with the lowest free energy of binding was only considered according to the Vina score. The results were visualized with the help of the Pymol software [50].

The experimental data were processed in compliance with Dixon’s method [51,52]. The data were plotted by two ways: as a reciprocal value of velocity against inhibitor concentration and as a substrate concentration divided by reaction velocity against inhibitor concentration, as described by Cornish–Bowden [52]. The inhibition constants, Ki, were calculated from the plots. Non-competitive standard inhibitors were assayed for their IC50. If necessary, the Ki value can be derived from the IC50 [53,54].

Caffeine is a simply available drug that has been known for a long time and by many cultures. Despite a lot of work on the identification of caffeine’s effect in the body, some pathways remain undiscovered. In the present work, we proved that caffeine can act as a non-competitive inhibitor of AChE in the body. This finding can be expected in some of the clinically proven effects with no known molecular mechanism. We can emphasize that caffeine can be considered as a potential lead structure in drug design.

The Ministry of Education, Youth and Sports (Czech Republic) is gratefully acknowledged for “A long-term organization development plan 1011”. The European Regional Development Fund and the state budget of the Czech Republic are acknowledged for project RECAMO, CZ.1.05/2.1.00/03.0101. The funder had no role in the study design, data collection and analysis or the decision to publish or to prepare the manuscript. 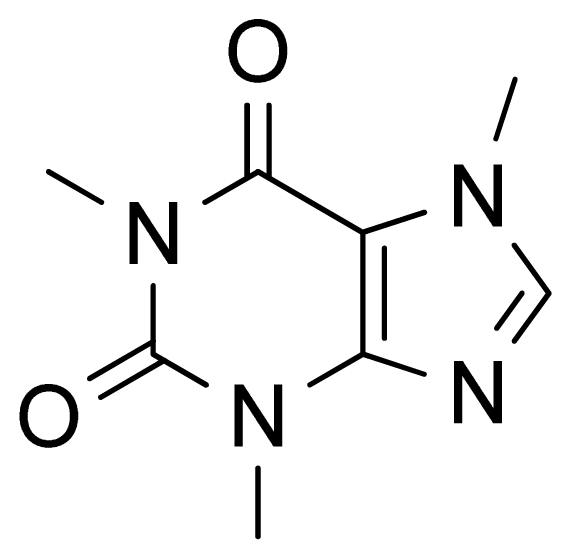 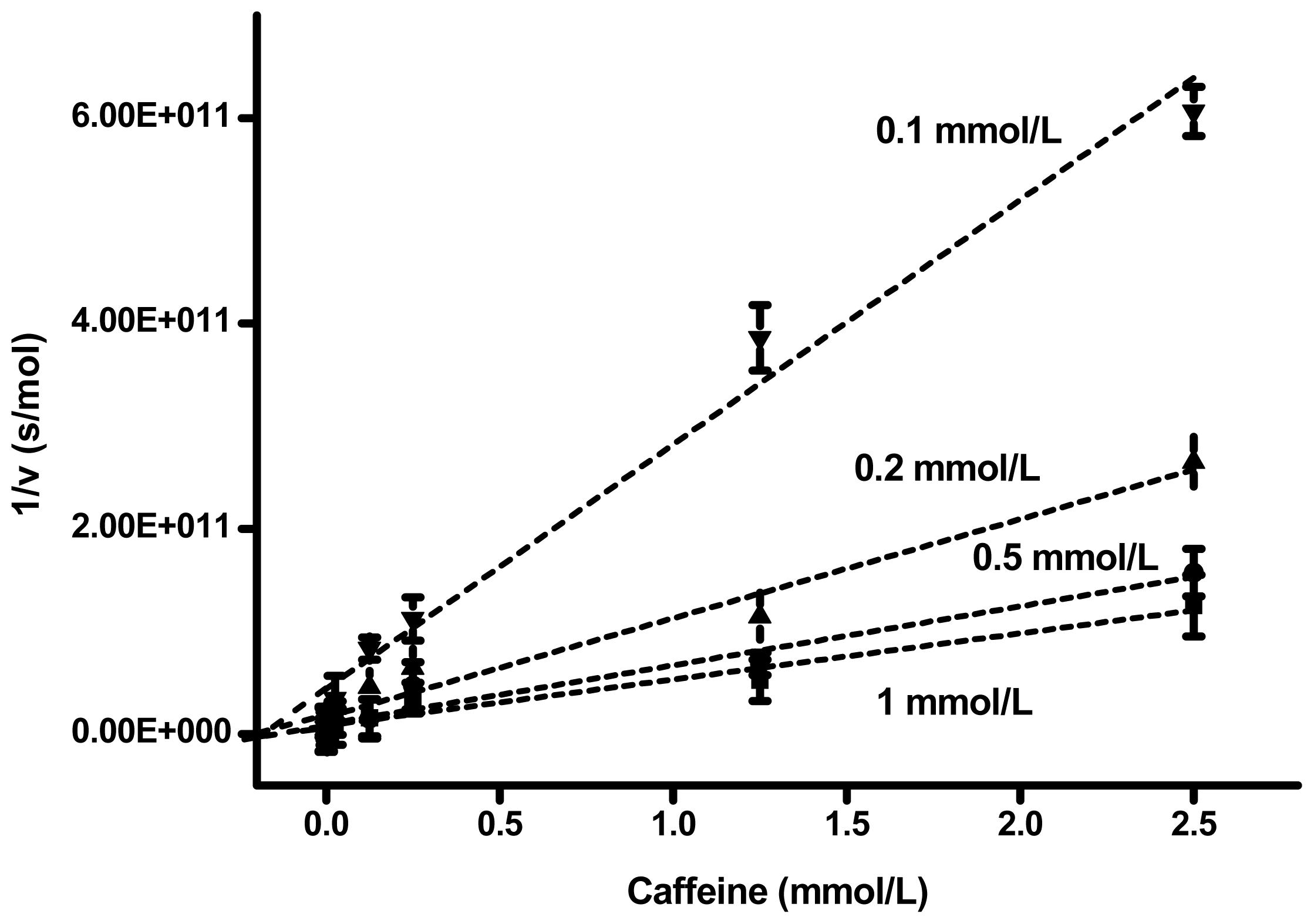