Mechanisms of Resistance to Endocrine Therapy in Breast Cancer: Focus on Signaling Pathways, miRNAs and Genetically Based Resistance

HGF–MET Cascade, a Key Target for Inhibiting Cancer Metastasis: The Impact of NK4 Discovery on Cancer Biology and Therapeutics

Hepatocyte growth factor (HGF) was discovered in 1984 as a mitogen of rat hepatocytes in a primary culture system. In the mid-1980s, MET was identified as an oncogenic mutant protein that induces malignant phenotypes in a human cell line. In the early 1990s, wild-type MET was shown to be a functional receptor of HGF. Indeed, HGF exerts multiple functions, such as proliferation, morphogenesis and anti-apoptosis, in various cells via MET tyrosine kinase phosphorylation. During the past 20 years, we have accumulated evidence that HGF is an essential conductor for embryogenesis and tissue regeneration in various types of organs. Furthermore, we found in the mid-1990s that stroma-derived HGF is a major contributor to cancer invasion at least in vitro. Based on this background, we prepared NK4 as an antagonist of HGF: NK4 inhibits HGF-mediated MET tyrosine phosphorylation by competing with HGF for binding to MET. In vivo, NK4 treatments produced the anti-tumor outcomes in mice bearing distinct types of malignant cancers, associated with the loss in MET activation. There are now numerous reports showing that HGF-antagonists and MET-inhibitors are logical for inhibiting tumor growth and metastasis. Additionally, NK4 exerts anti-angiogenic effects, partly through perlecan-dependent cascades. This paper focuses on the chronology and significance of HGF-antagonisms in anti-tumor researches, with an interest in NK4 discovery. Tumor HGF–MET axis is now critical for drug resistance and cancer stem cell maintenance. Thus, oncologists cannot ignore this cascade for the future success of anti-metastatic therapy. View Full-Text
Keywords: HGF; MET; NK4; oncogenesis; cancer invasion and metastasis; angiogenesis; perlecan HGF; MET; NK4; oncogenesis; cancer invasion and metastasis; angiogenesis; perlecan
►▼ Show Figures 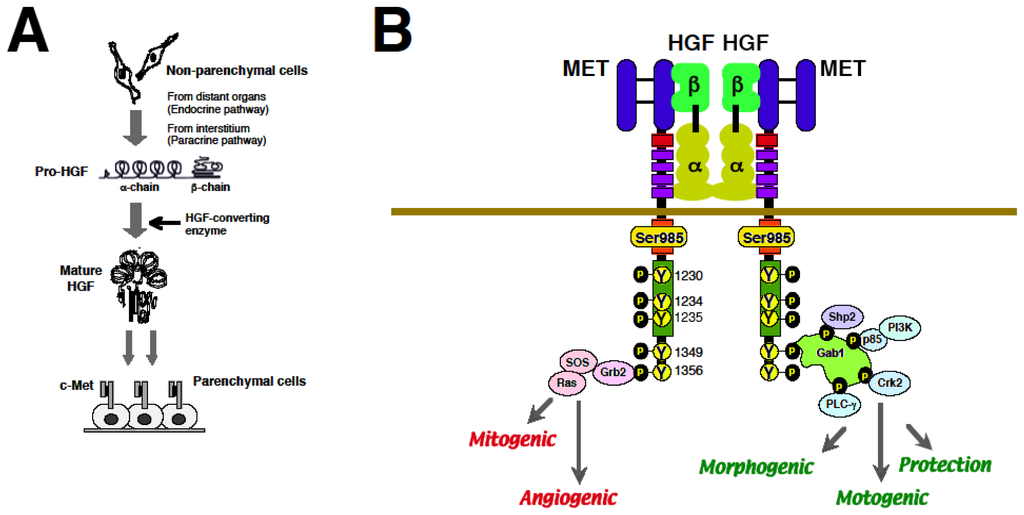