Effect of β,β-Dimethylacrylshikonin on Inhibition of Human Colorectal Cancer Cell Growth in Vitro and in Vivo

The mushroom Inonotus obliquus has been widely used as a folk medicine in Russia, Poland and most of the Baltic countries. In this study, water-soluble and alkali-soluble crude polysaccharides (IOW and IOA) were isolated from I. obliquus, and the carbohydrate-rich fractions IOW-1 and IOA-1 were obtained respectively after deproteination and depigmentation. Their contents, such as neutral carbohydrate, uronic acid and protein, were measured. Their antioxidant properties against chemicals-induced reactive species (ROS) including 1,1'-Diphenyl-2-picrylhydrazyl (DPPH) radical, hydroxyl radical and superoxide anion radical, as well as their protective effects on H2O2-induced PC12 cell death were investigated. Results showed that I. obliquus polysaccharides can scavenge all ROS tested above in a dose-dependent manner. IOA and its product IOA-1 could rescue PC12 cell viability from 38.6% to 79.8% and 83.0% at a concentration of 20µg/mL. Similarly, IOW and its product IOW-1 at the same dose, can also increase cell viability to 84.9% and 88.6% respectively. The antioxidative activities of water-soluble and alkali-soluble polysaccharide constituents from I. obliquus might contribute to diverse medicinal and nutritional values of this mushroom. View Full-Text
Keywords: Inonotus obliquus; polysaccharide; antioxidant; reactive oxygen species Inonotus obliquus; polysaccharide; antioxidant; reactive oxygen species
►▼ Show Figures 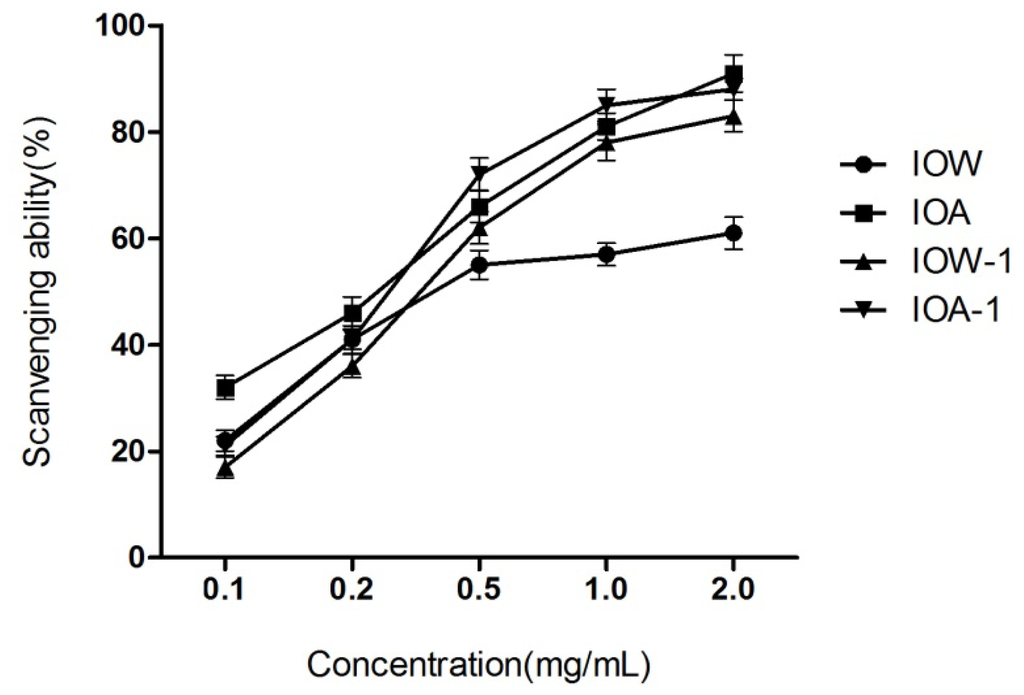