A Practical Chemo-enzymatic Approach to Highly Enantio-Enriched 10-Ethyl-7,8-dihydro-γ-ionone Isomers: A Method for the Synthesis of 4,5-Didehydro-α-Ionone
Previous Article in Special Issue

Porcine aortic endothelial cells (PAEC) were isolated from porcine aortae and cultured in low glucose Dulbecco’s modified Eagle’s medium (DMEM) supplemented with 5% fetal bovine serum and 1% penicillin-streptomycin. Cells (passage 5 to 8) were maintained in a 37 °C, 5% CO2 incubator, and medium was changed every two days. For 2D cell culture, PAEC were seeded in a 24-well plate at 200,000 cells/well and cultured for two days. One milliliter nanoparticle solution for each coating and concentration was then added to cells for 3–24 h. For 3D cell culture, sodium alginate (1% w/v, FMC BioPolymer, Philadelphia, PA, USA) was used as the scaffold material. 0.1 mg/mL 5 or 30 nm bare, dextran, or PEG coated nanoparticles were either mixed into the alginate solution at the same time as cells (1.5 × 105 cells/mL), or nanoparticles were incubated with cells for 24 h after which the trypsinized cells with internalized nanoparticles were mixed in the alginate solution. 0.3 g alginate was then deposited into a 6-well plate and incubated with 5% calcium chloride (CaCl2) as the ionic cross-linking solution for 5 min, after which supplemented medium was added and samples were stored in the incubator. Medium was changed every 2 days to maintain cell viability.

Dextran and PEG coatings were verified by TEM. Nanoparticle solutions were diluted in distilled water, and a single drop of nanoparticle solution was added to a copper TEM grid (Pacific Grid-Tech, San Francisco, CA, USA). After each sample was dried at room temperature for 24 h, nanoparticles were imaged with a JEOL JEM100CX TEM at 100 kV. To determine cell nanoparticle uptake, increasing nanoparticle concentrations were added to confluent PAEC (2 × 105 cells/mL) in a 24 well plate for 3 h. Samples were washed with phosphate buffered saline (PBS), fixed with 4% paraformaldehyde and 2.5% glutaraldehyde for 15 min, and cells were then gently scraped from the dish and kept in fixative for another 2 h on ice. Cells were then pelleted and washed with 0.1 M sodium cacodylate buffer. The cell pellets were mixed with warmed 3% agarose liquid, and subsequently the cooled agarose gel pellets were sliced into 1 mm thick bricks and post fixed with 2% osmium tetroxide and 0.5% uranyl acetate. Agarose bricks were dehydrated with graded acetone, embedded in Epon, polymerized in a 60 °C oven for 2 days, and cut into ultrathin (100 nm) sections for TEM.
Cell nanoparticle uptake was quantified by dissolving cells and their intracellular nanoparticles and measuring iron absorbance. Cells incubated with iron oxide nanoparticles were trypsinized, and 200 μL cell solution was incubated with 200 μL of 1 M NaOH for 30 min at 90 °C. Five hundred microliter of 1 M HCl was then added for 2–3 h to completely dissolve the nanoparticles. Two hundred microliter cell lysate was transferred to 96-well-plate, and absorbance (335 nm) was measured with GENios microplate reader.

Cell viability was assessed via a Live/Dead assay (Invitrogen, Grand Island, NY, USA). In the presence of intracellular esterases in live cells, nonfluorescent calcein AM is converted to fluorescent calcein (green). In dead cells, ethidium homodimer-1 (EthD-1) enters through damaged cell membranes and fluoresces when it binds to nucleic acids (red). Confluent PAEC in 24 well plates were incubated with increasing concentrations of bare and coated 5 and 30 nm nanoparticles for 24 h. Two micromole per liter calcein AM and 4 μM EthD-1 were added to each well for 30 min, after which cells were imaged in an Olympus IX81 inverted fluorescent microscope. For 3D samples, alginate-nanoparticle-cell constructs were incubated with 500 μL of Live/Dead solution for 30 min and then placed on a coverslip just prior to imaging with an Olympus IX81 confocal microscope. A depth of 250 μm was scanned in the gel for 3D Live/Dead images.
An Alamar blue assay, which measures cell mitochondrial metabolic activity, was used to confirm cell viability in 3D samples [53]. In this assay, the tetrazolium-based dye resazurin is non-fluorescent blue until it is reduced in mitochondria to fluorescent red. Alginate-nanoparticle-cell samples were incubated with 2 mL medium with 200 μL Alamar blue (AbD Serotec, Raleigh, NC, USA). After 4 h, 400 μL medium from each sample was measured for fluorescence intensity using a GENios microplate reader (excitation/emission: 535/590 nm) [46].

ROS in live cells were detected with the Image-iT Green Reactive Oxygen Species kit (Invitrogen), which uses 5-(and-6)-carboxy-2′,7′-dichlorodihydrofluorescein diacetate (carboxy-H2DCFDA) as a general ROS fluorogenic indicator. Tert-butyl hydroperoxide (tBHP) was the positive control, and Hoechst 33342 was used to label cell nuclei. Confluent PAEC in 24 well glass bottom dishes were incubated with different concentrations of bare and coated 5 and 30 nm nanoparticles for 3 h. Cells were labeled with 10 μM carboxy-H2DCFDA and 1.0 mM Hoescht according to the manufacturer’s protocol. Samples were then imaged in an Olympus IX81 confocal microscope (excitation/emission 495/529 nm and 350/461 nm for carboxy-H2DCFDA and Hoechst respectively).

The actin cytoskeleton was labeled to assess changes in cell shape with nanoparticle exposure. PAEC were cultured in 24 well plates for 24 h, after which bare and coated 5 and 30 nm iron oxide nanoparticles were added for another 24 h. Samples were then fixed with 4% paraformaldehyde, permeabilized with 1% v/v Triton X-100, and incubated with rhodamine phalloidin (1 unit/well, actin) in 1% bovine serum albumin (BSA, Sigma) followed by Hoechst (1 μg/mL, nuclei). Samples were imaged in by confocal microscopy (excitation/emission: 540/565 for rhodamine phallodin). Cell length was measured with Image-J by selecting the distance between the two opposing end points of one cell.

Data are graphed as mean ± standard deviation. Statistical analyses were performed with Matlab and Excel. Comparisons between two groups were analyzed using Student’s t-test with statistical significance at p < 0.05 (#) or p < 0.01 (*). Experiments were performed in triplicate, and each experiment was repeated at least 3 times.

The authors thank the University of Pennsylvania Center of Excellence in Environmental Toxicology, the Nanotechnology Institute Pilot Projects in Nanotoxicology and National Science Foundation (CMMI-1038769) for funding as well as Rabia Qureshi for help with assays and Vladimir Muzykantov for thoughtful scientific discussions. 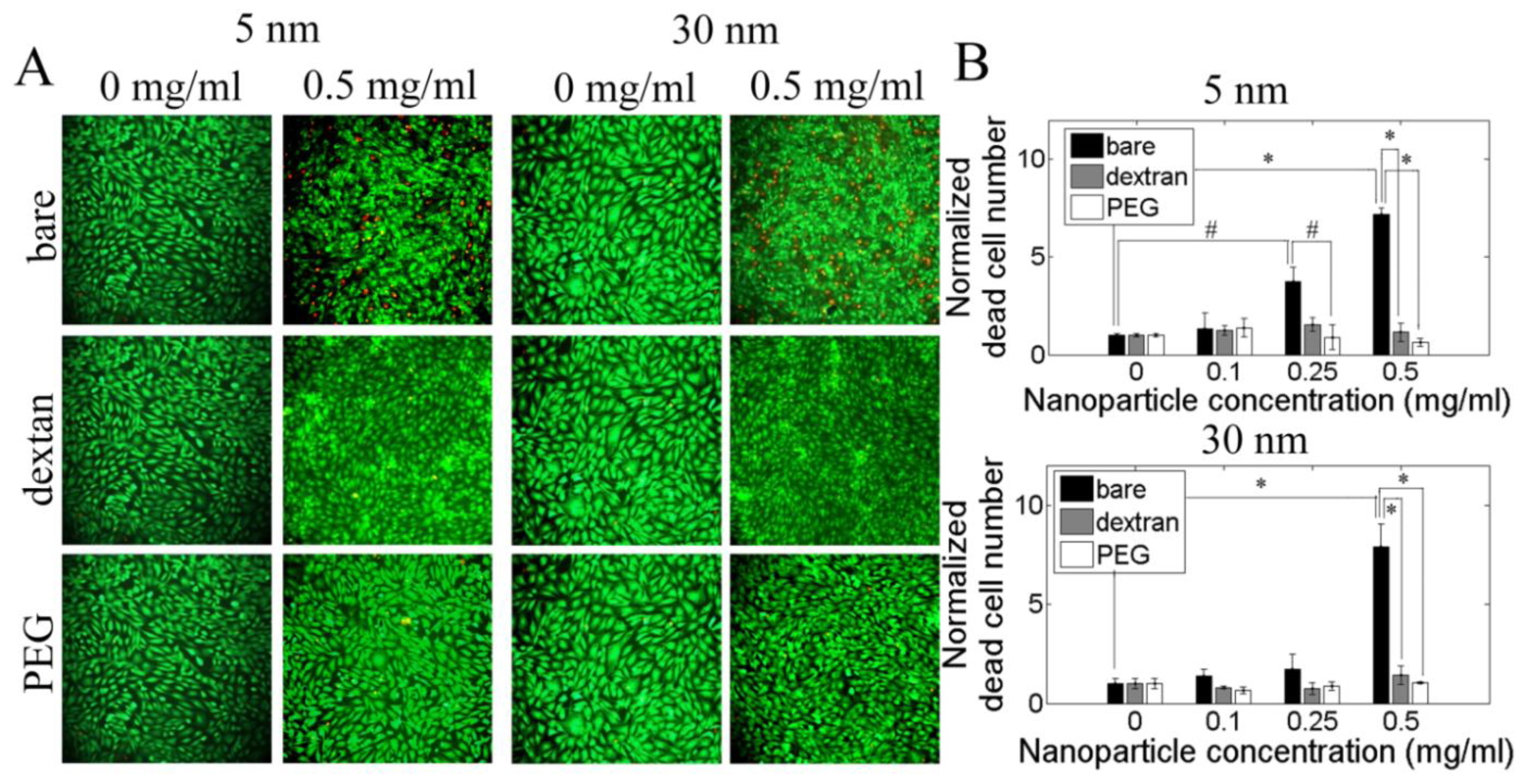 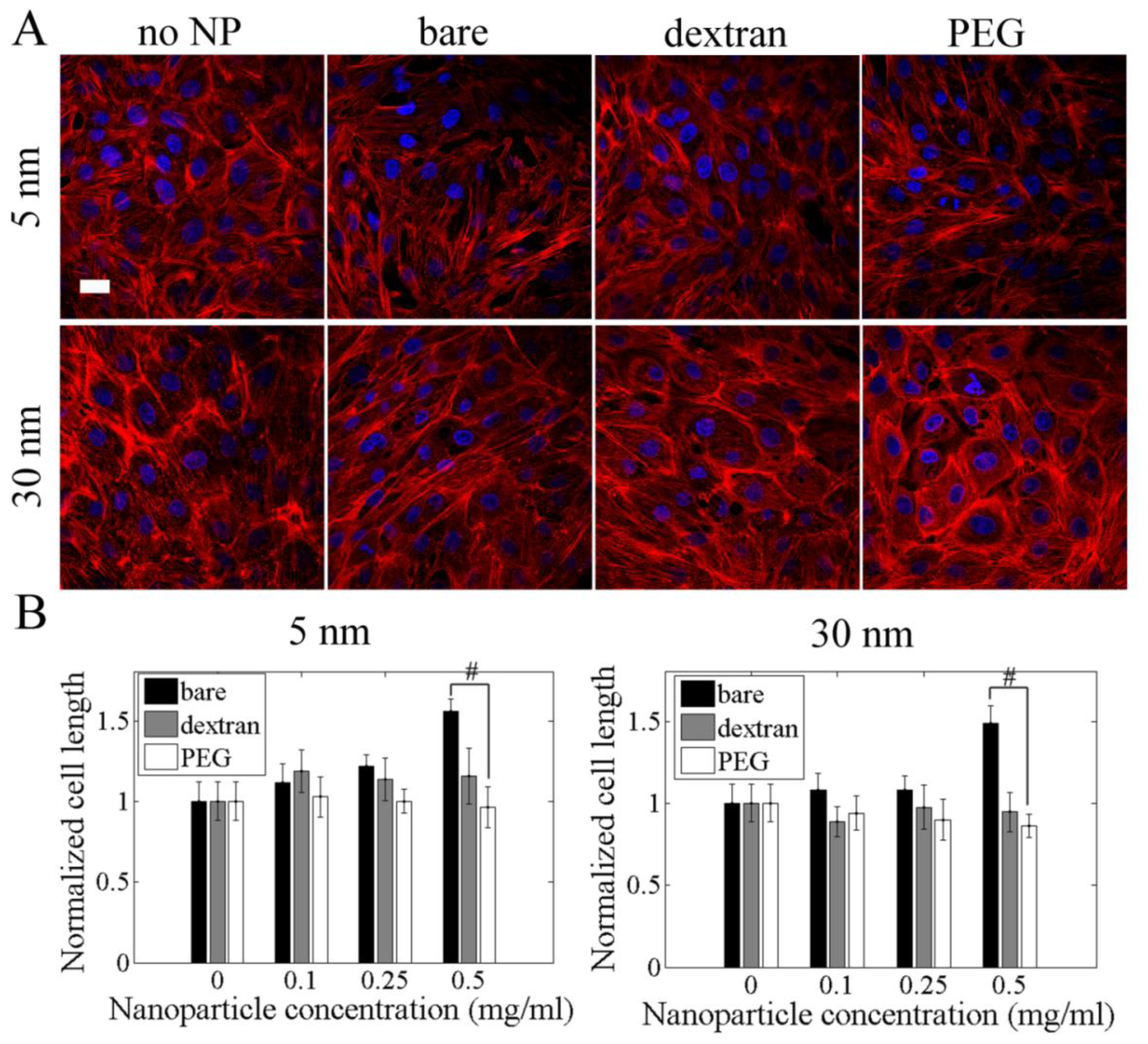 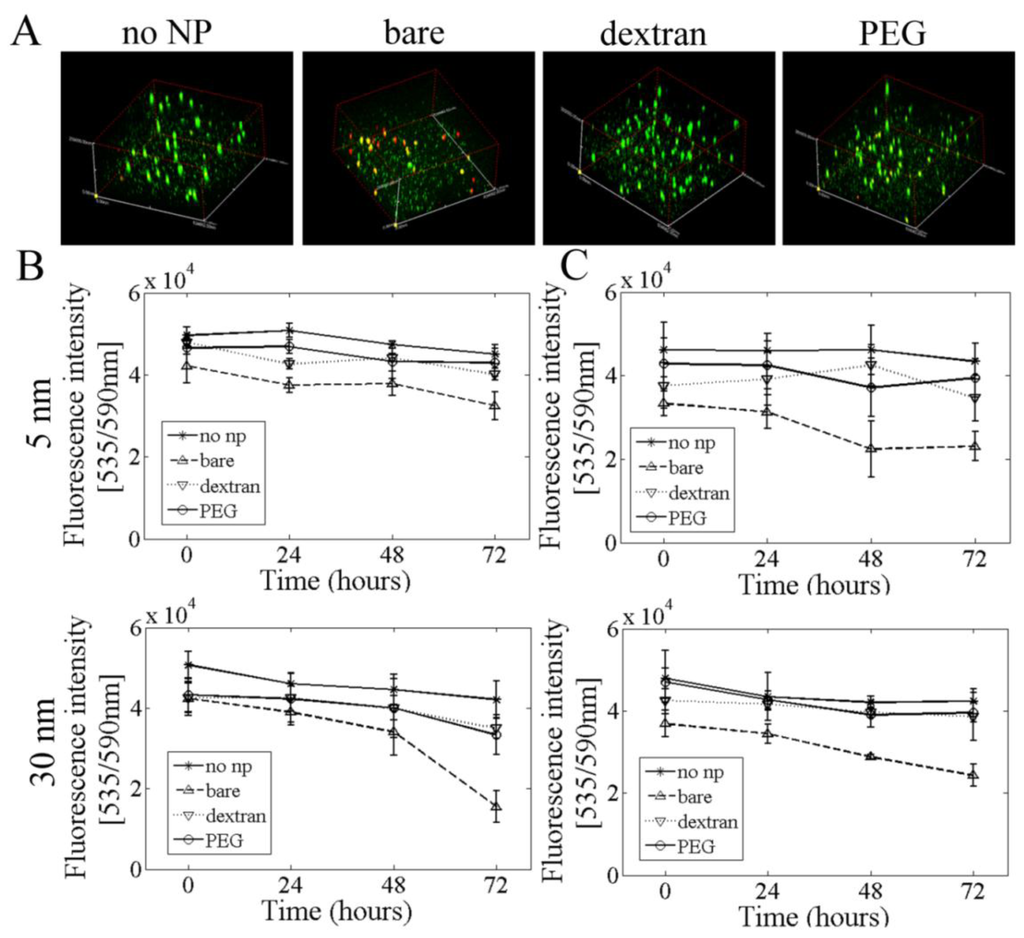 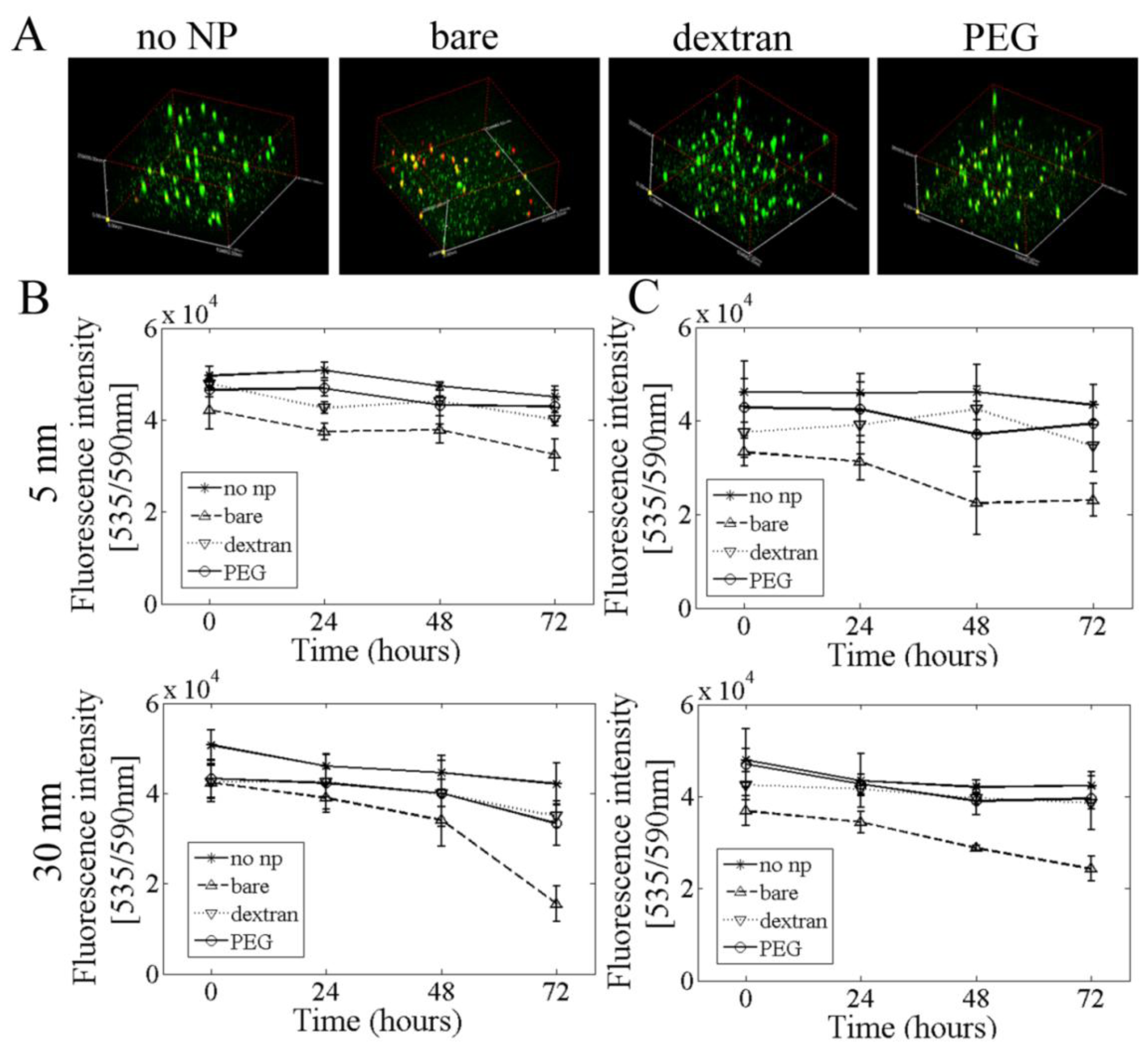