Glutamic acid is a multifunctional amino acid involved in taste perception, excitatory neurotransmission and intermediary metabolism [1]. It plays an important role in gastric phase digestion with multiplicity effects in the gastrointestinal tract when consumed with nutrients by enhancing gastric exocrine secretion [2]. Glutamic acid is a specific precursor for other amino acids i.e., arginine and proline as well as for bioactive molecules such as γ-amino butyric acid (GABA) and glutathione. GABA possesses several well-known physiological functions (i.e., anti-hypertension [3] and anti-diabetic [4]) and glutathione plays a key role in the protection of the mucosa from peroxide damage and from dietary toxins [5]. Furthermore, a number of studies have shown the possible usefulness of glutamic acid in enhancing nourishment in the elderly and in patients with poor nutrition [6,7]. At the present time, glutamic acid is largely produced through microbial fermentation because the chemical method produces a racemic mixture of glutamic acid (d- and l-glutamic acid) [8]. Numerous studies have reported glutamic acid excretion by various micro-organisms; however, most of them were not food-grade micro-organisms. Lactic acid bacteria (LAB) are well known to produce a variety of primary metabolites. The existence of the gdh gene in LAB which is responsible for the production of glutamic acid has been proven [9]. In addition, LAB are essential in the processing of food materials and they have been applied extensively in the food industry [10]. LAB can enhance the shelf-life and safety of foods, improve food texture, and contribute to the nutritional value of food products and pleasant sensory profile of the end-use products [11]. Employing LAB, on the other hand, with the potential to produce glutamic acid can facilitate production of functional foods rich in bioactive molecules such as GABA. The key advantage of the glutamic acid production by LAB is that the amino acid produced in this way is biologically active (l-glutamic acid) and the production process is considered to be safe and eco-friendly. This can be achieved through selection of appropriate LAB strains from indigenous micro-organisms which are well-adapted to a particular product, more competitive and with elevated metabolic capacities. Thus, research of this technological potential is of highest interest to the industry.
As a result, selection of the most efficient glutamic acid-producing LAB strains may contribute to new fermented products with improved general standards with respect to the naturally-biosynthesized glutamic acid. This could lead to the development of fermented foods rich in glutamic acid and consequently GABA. Therefore, it is hypothesized that screening various LAB capable of producing glutamic acid may explore new avenues for mass production of functional foods rich in GABA.

In order to identify the LAB strain MNZ, the API carbohydrate fermentation kit was utilized. The results showed that this strain was able to assimilate the following carbon sources: Ribose, galactose, d-glucose, fructose, mannose, manitol, sorbitol, α-methyl-d-mannoside, N-acetyl glucosamine, arbutin, cellobiose, maltose, lactose, melibiose, sucrose, gentiobiose, turanose, salicin and aesculin; while this ability was negative for the rest of carbon sources. The pattern of assimilation ability of this isolate for carbohydrates was in agreement with the metabolic characteristics of Lactobacillus plantarum described by Bergey’s Manual of Systemic Bacteriology [15]. Taxonomic identification of the strain MNZ at species level was performed by 16S rRNA gene sequencing. The sequence was deposited on NCBI under accession number HM175883 (Lactobacillus plantarum MZ-02).

In order to investigate the glucose consumption pattern of the LAB strain, the strain MNZ was cultivated in MRS broth at 30 °C for 144 h. The broth was supplemented with 12% glucose in order to examine the effects of glucose concentration on the production of glutamic acid. As shown in Figure 2, there was a sharp decrease in glucose content between 12 and 72 h of fermentation. This might be due to the microbial growth with the highest log10 CFU/mL of 8.3 after 72 h of fermentation. In other investigations using other species of glutamic acid-producing bacteria, the glucose consumption pattern during glutamic acid production was found to be similar to the present study [21]. A continuing decrease in the sugar concentration which is consumed by the bacterium corresponds with the growth of the culture [22].

Ammonium nitrate as a nitrogen source was chosen in this study and the effect of its different concentrations on the glutamic acid production was tested. The results presented in Figure 3 show that 0.7% (w/v) was the best concentration of ammonium nitrate for Lactobacillus plantarum to produce glutamic acid. The mechanism by which ammonia enhances glutamic acid production is associated with nitrogen as an essential component for amino acid production. Nitrogen plays an important role in fermentative cultivation of glutamic acid-producing bacteria. Therefore, nitrogen is taken up by cells, and thereafter assimilated to accomplish their metabolism [23].
It is well-known that the uptake of nitrogen sources into the cells is mediated either by passive diffusion (ammonium) or active transport [24]. Generally the bacteria follow two different pathways for ammonium assimilation to form glutamic acid. When the ammonia concentration is low and the diffusion into cells becomes restricted, a unique ammonium transporter (AmtB) encoded by the amt gene is activated to cope with the nitrogen starvation, and ammonium is assimilated to glutamine by glutamine synthetase [25]. In contrast, in the presence of high concentrations of ammonium, the diffusion of uncharged ammonia (NH3) occurs through the cytoplasmic membrane. This would promote the growth of the bacterial cells, and thereby ammonium is assimilated by glutamate dehydrogenase to form glutamic acid. Similarly, Tesch et al. [26] showed that most of the ammonium (72%) is assimilated by the glutamate dehydrogenase to form glutamic acid which has been proven to demonstrate high activity in Lactobacillus plantarum [27].

2.6. Study of Growth Profile and Association with Glutamic Acid Production

Isolation of lactic acid bacteria (LAB) from fermented food products was performed according to the method described by Adnan and Tan [41] with minor modifications. Each sample (10 g) was separately blended with 90 mL of 0.85% NaCl solution for 2 min (Lab Blender Seward, Stomacher 400). This blended food (10 mL) was mixed with MRS broth (90 mL) in a 250 mL Erlenmeyer flask. The broths containing the food samples were enriched with glucose (2% w/v). The flasks were incubated at 30 °C, 100 rpm, for 7 days. Aliquots of the culture from each of the flasks were serially diluted from 101 to 1012 times and 0.1 mL of each dilution was spread evenly on MRS agar plates. Colonies of LAB were counted on MRS agar plates after anaerobic incubation for 72 h at 30 °C in GasPaks jars (GasPaks System, BBL) and colonies were reported as log10 CFU/mL. Colonies with distinct morphological differences such as color, size and shape were randomly picked from countable MRS agar plates and subcultured on fresh MRS agar plates. Pure colonies were maintained in 20% v/v glycerol in MRS broth for storage at −80 °C. Each of the isolates was first tested for catalase reaction based on bubble formation after applying 3% hydrogen peroxide solution on the cells. The isolates with catalase-negative results were Gram-stained, and those with Gram-positive activity were considered as lactic acid bacteria for further experiments and analyses.

Glutamic acid extracted from MRS broth was subjected to derivatization according to the method described by Rossetti and Lombard [44]. Quantitative measurement of the glutamic acid was performed by running an HPLC analysis of the glutamic acid according to the method described by Yang [42]. The derivatized samples were dissolved in 200 mL of initial mobile phase, consisting of a mixture of 60% solution A (aqueous solution of 10.254 g sodium acetate, 0.5 mL tri ethylamine and 0.7 mL acetic acid in 1000 mL, final pH 5.8), 12% solution B (acetonitrile) and 28% solution C (deionized water). Gradient HPLC separation was performed on a Shimadzu (Kyoto, Japan) LC 20AT apparatus, consisting of a pump system, a CTO-10ASVP model oven with a 20 μL injection loop injector, and a model SPD-M20A PDA (Photo Diode Array) Detector, in conjunction with a DELL Optiplex integrator. A Prevail C18 column (250 mm × 4.6 mm I.D., particle size 5 μm/L, Alltech, IL, USA) was used during the analysis. The mobile phase for the gradient elution was pumped at 0.6 mL/min flow rate and 27 °C temperature, and glutamic acid detection was performed at 254 nm.

Microscopic and conventional biochemical and physiological techniques were used to initially characterize all the LAB isolates. The isolates were individually propagated in MRS broth. Each strain was primarily subjected to catalase and Gram-reaction tests. Based upon the phenotypic characteristics, only the catalase-negative and Gram-positive isolates were selected. The selected LAB isolates were also tested for colony formation, cell morphologies, and cell grouping using a light microscope (NIKON YS 100). Further identification of the superior glutamic-acid-producing isolate was carried out by employing API 50 CHL fermentation strips (BioMérieux, Marcy l’Etoile, France) at 30 °C according to the manufacturer’s instructions.

The LAB strain with superior glutamic acid production was identified by 16S rRNA gene sequencing analysis. Genomic DNA from the LAB selected was extracted according to the method described by Sambrook [45]. The 16S rRNA gene amplification was performed using a genomic DNA sample as template and following universal primer pairs; 27F (5′ AGAGTTTGATCCTGGCTCAG 3′) and 1492R (5′ GTTTACCTTGTTACGACTT 3′). The following thermal cycle was used: 95 °C for 3 min; 40 cycles of: 95 °C for 30 s (denaturation), 55 °C for 55 s (annealing), and 72 °C for 60 s (extension); and one cycle final primer extension 72 °C for 10 min. The purified PCR products using QIAquick Gel Extraction Kit (QIAGEN, Germany) were sequenced by First BASE Laboratories Sdn. Bhd. (Shah Alam, Selangor, Malaysia). The 16S rRNA sequences were aligned and compared with other 16S rRNA genes in the GenBank by using the NCBI Basic Local Alignment Search Tools, nucleotide (BLASTn) program [46]. The 16S rRNA gene sequence described in this study was deposited into the Genbank Data Library and assigned the accession number HM175883.

This research was fully supported by the Fundandamental Grant (05-10-07-380 FR) from the Ministry of Higher Education, Malaysia, which was awarded to Nazamid Saari. 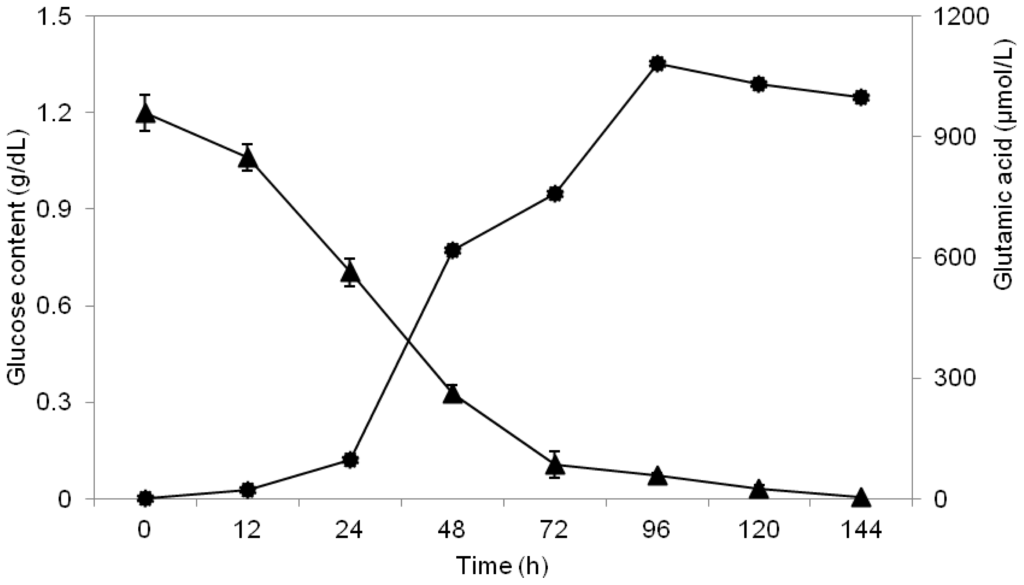 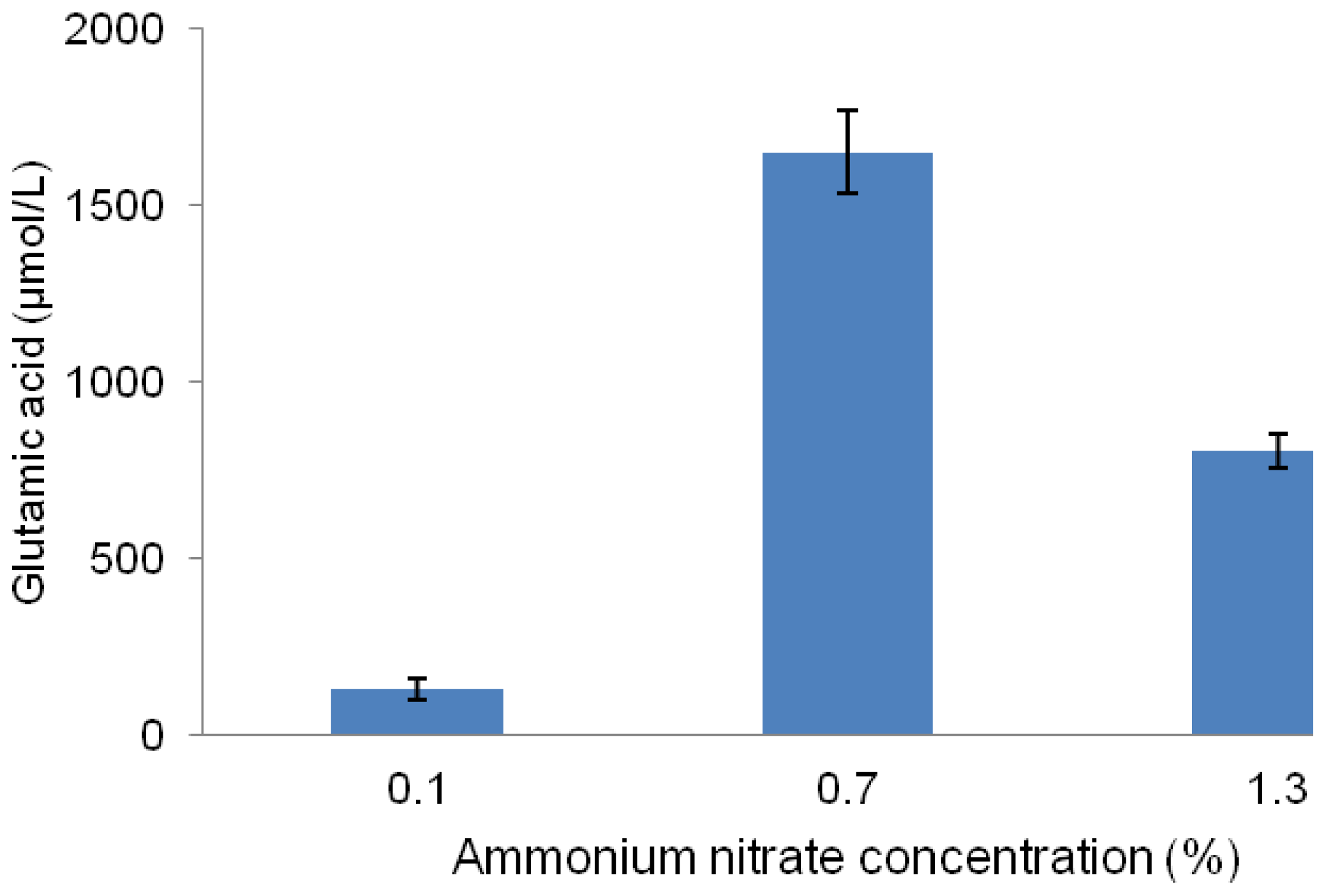 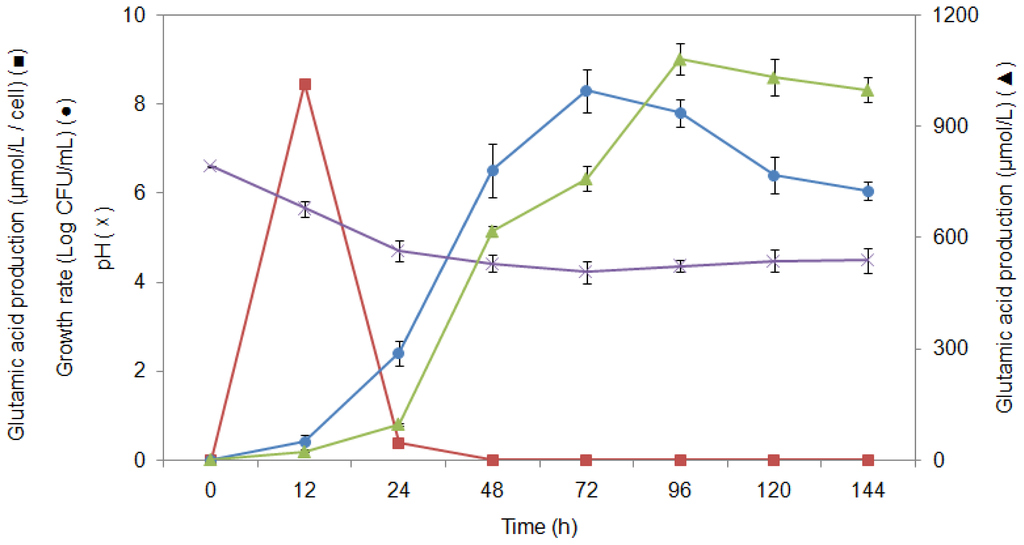 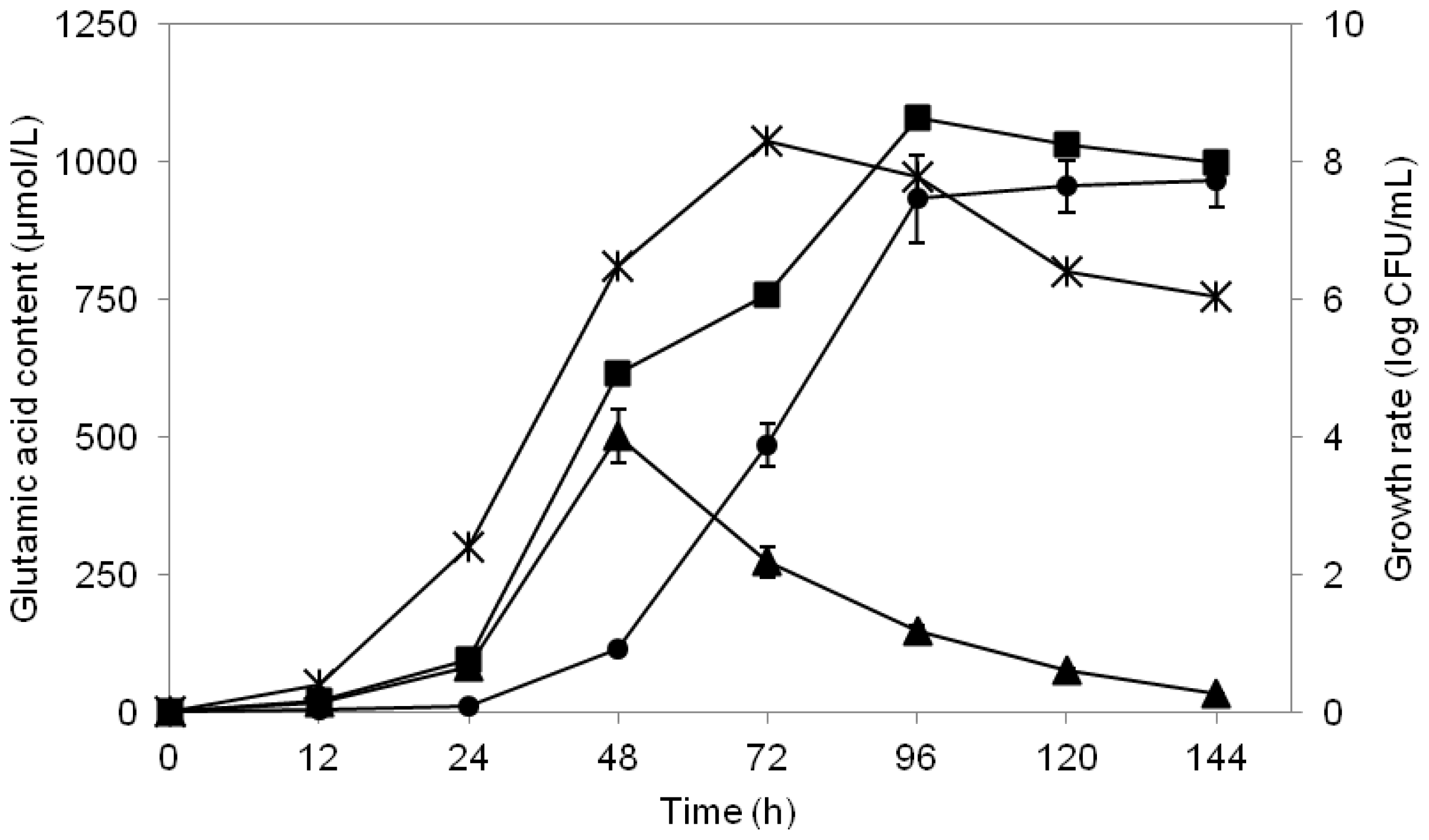 Table 1. Characteristics of the LAB isolates which biosynthesized glutamic acid in MRS broth.