Arabidopsis RIBA Proteins: Two out of Three Isoforms Have Lost Their Bifunctional Activity in Riboflavin Biosynthesis

Riboflavin serves as a precursor for flavocoenzymes (FMN and FAD) and is essential for all living organisms. The two committed enzymatic steps of riboflavin biosynthesis are performed in plants by bifunctional RIBA enzymes comprised of GTP cyclohydrolase II (GCHII) and 3,4-dihydroxy-2-butanone-4-phosphate synthase (DHBPS). Angiosperms share a small RIBA gene family consisting of three members. A reduction of AtRIBA1 expression in the Arabidopsis rfd1mutant and in RIBA1 antisense lines is not complemented by the simultaneously expressed isoforms AtRIBA2 and AtRIBA3. The intensity of the bleaching leaf phenotype of RIBA1 deficient plants correlates with the inactivation of AtRIBA1 expression, while no significant effects on the mRNA abundance of AtRIBA2 and AtRIBA3 were observed. We examined reasons why both isoforms fail to sufficiently compensate for a lack of RIBA1 expression. All three RIBA isoforms are shown to be translocated into chloroplasts as GFP fusion proteins. Interestingly, both AtRIBA2 and AtRIBA3 have amino acid exchanges in conserved peptides domains that have been found to be essential for the two enzymatic functions. In vitro activity assays of GCHII and DHBPS with all of the three purified recombinant AtRIBA proteins and complementation of E. coli ribA and ribB mutants lacking DHBPS and GCHII expression, respectively, confirmed the loss of bifunctionality for AtRIBA2 and AtRIBA3. Phylogenetic analyses imply that the monofunctional, bipartite RIBA3 proteins, which have lost DHBPS activity, evolved early in tracheophyte evolution. View Full-Text
Keywords: riboflavin; flavo-coenzyme; bifunctional enzyme; Arabidopsis; FAD and FMN riboflavin; flavo-coenzyme; bifunctional enzyme; Arabidopsis; FAD and FMN
►▼ Show Figures 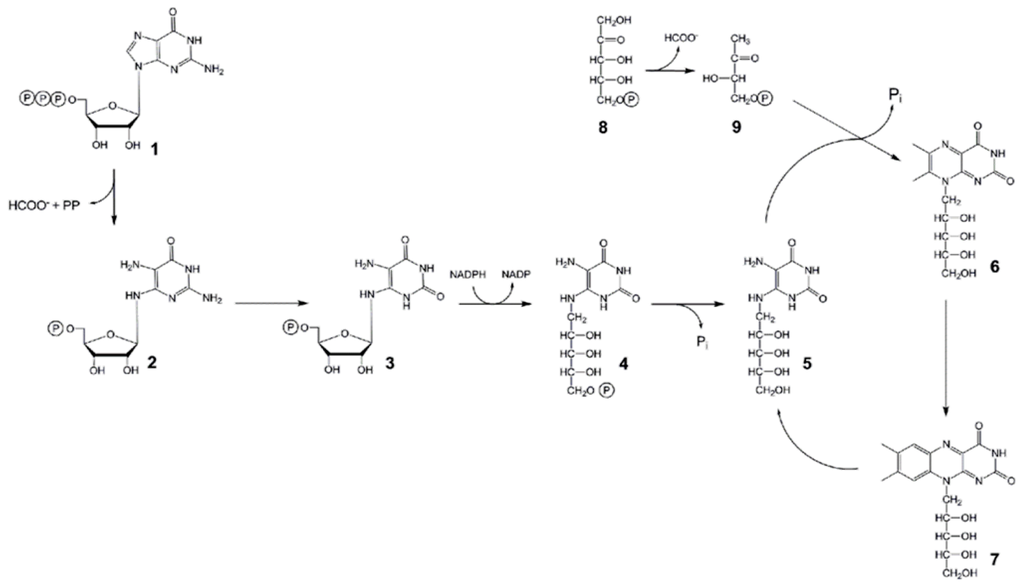