Gastric cancer is the second most common cause of cancer death worldwide [1,2]. About one million patients are newly diagnosed with gastric cancer each year, with 700,000 deaths each year [1]. It is known that gastric cancer can be caused by the interaction between environmental factors and genetic variations [3–5]. As an environmental factor, Helicobacter pylori (H. pylori) infection plays an important role in the development of gastric cancer. However, only a small proportion of H. pylori carriers develop gastric cancers. Such clinical diversity indicates that there are likely to be other factors in gastric carcinogenesis, including genetic susceptibility of the host [6–8].
Aird et al. were the first to notice the correlation between gastric cancer and blood group A [9]. Since then, the relationship between ABO blood groups and carcinogenesis or progression of human tumors has been reported by many investigations, including increased breast cancer risk in blood group A [10]. In a hospital-based case-control study, increased pancreatic cancer risk among persons with blood type A [11], and increased ovarian cancer risk in women with blood group A than in others was reported [12]. However, the results regarding the relationship between blood group A and gastric cancer were inconsistent [9,13–15].
Meta-analysis is a well-established method that can pool the data from smaller inconclusive studies [16]. Compared to individual studies, the data yielded from meta-analysis disclosed greater statistical power and property for genetic risks analysis [17]. To understand the correlation between ABO blood groups and the risk of developing gastric cancer, we conducted a case-control study of 1,045 cases of gastric cancer from Shanghai Ruijin Hospital, and 53,026 healthy blood donors from Shanghai blood center. Moreover, we searched the Pubmed database and combined them with our own research data in order to perform an overall meta-analysis on the relationship between ABO blood groups and the gastric cancer risk. Current study provides a systematic knowledge on the correlation among human ABO blood groups, H. pylori susceptibility and gastric cancer risk.

The ABO blood group information of 1,045 cases of hospitalized gastric cancer was from Shanghai Ruijin Hospital between 2002 and 2010, with age 25 to 90, median 60 years old. Among them, 709 cases are male and 336 cases are female. Of them, 115 cases obtained H. pylori infection information through 13C urea breath test before operation. The diagnosis of gastric cancer was confirmed histologically in all patients. The control group was composed of 53,026 healthy blood donors in 2010 from Shanghai central blood bank. Informed consent for participation in the study was obtained from all subjects with approval by the ethics committee of Ruijin Hospital.
Pearson’s chi-square test was used to compare the distribution of ABO blood groups between gastric cancer patients and controls. Odds ratios (OR) and 95% confidence intervals (CI) were used to evaluate the relationship between ABO blood groups and gastric cancer. All statistical analyses were performed with SPSS (Version 15.0; SPSS Inc.: Chicago, IL, USA). p < 0.05 indicated statistically significant differences.

We comprehensively searched the Pubmed database for all English literatures from 1953 to end of 2010. We combined the terms “stomach neoplasms [MeSH] OR gastric neoplasms [tiab] OR stomach cancer [tiab] OR gastric cancer[tiab] OR stomach carcinoma[tiab] OR gastric carcinoma [tiab] OR gastric tumor [tiab]” and “ABO blood group system [MeSH] OR Blood Group [tiab] OR Blood group antigens [tiab].” The selection of articles was accomplished independently by two researchers (Wang and Liu), and discrepancies were discussed with the third researcher (Yu), until consensus was reached. The literatures that meet the following criteria were included in the meta-analysis: (1) the study was either a case-control study, or a nested case-control study; (2) the study reported the definite numbers of individuals with blood groups A, B, O, and AB in gastric cancer cases and controls. Non-English articles, review articles, or articles which were involving the mechanism study were excluded from the study. We used a standardized protocol to extract the following data from each publication, including the first author, year of publication, study design, source of the control group, country in which the study was performed and the percentage of ABO blood groups in cases and controls (Table 1) [9,13,18,19,26,28–45].
Q and Higgins I2 statistics were used to examine heterogeneity among studies. In Q statistic, p value less than 0.05 means a heterogeneity. The extent of heterogeneity was evaluated by I2, which was documented as the percentage (I2 = 0%–25%, no heterogeneity; I2 = 25%–50%, moderate heterogeneity; I2 = 50%–75%, high heterogeneity; I2 = 75%–100%, extremely high heterogeneity) [46,47]. Fixed-effects model (Mantel Haenszel) or random-effects model (Dersimonian and Laird) was used depending on the heterogeneity between studies. The fixed-effects model was used if there was no significant heterogeneity, otherwise, the random-effects model was used [46]. To estimate the one or more covariates related to heterogeneity, meta-regression, as an extension to random-effects meta-analysis, was employed. Publication time is a continuous variable. Whole data are divided into two case-control studies and other studies. Geographical region is divided into Asia, Europe, America and other areas. As for a sample constitution, we first computed the mean of the proportion of people with different ABO blood groups in all individuals. The proportion of persons with different ABO blood groups was higher than the mean that was deemed as Group One, while the proportion of individuals with different ABO blood groups was lower than the mean that was deemed as Group Two. The overall effect was assessed by Z test. Funnel plots and Egger’s regression asymmetry test or Begg’s test were used to probe for publication bias [48,49]. Forest plots were used for graphic display. A p value of <0.05 was considered statistically significant. All data were analyzed with STATA (Version 11.0; Stata Corp.: College Station, TX, USA). 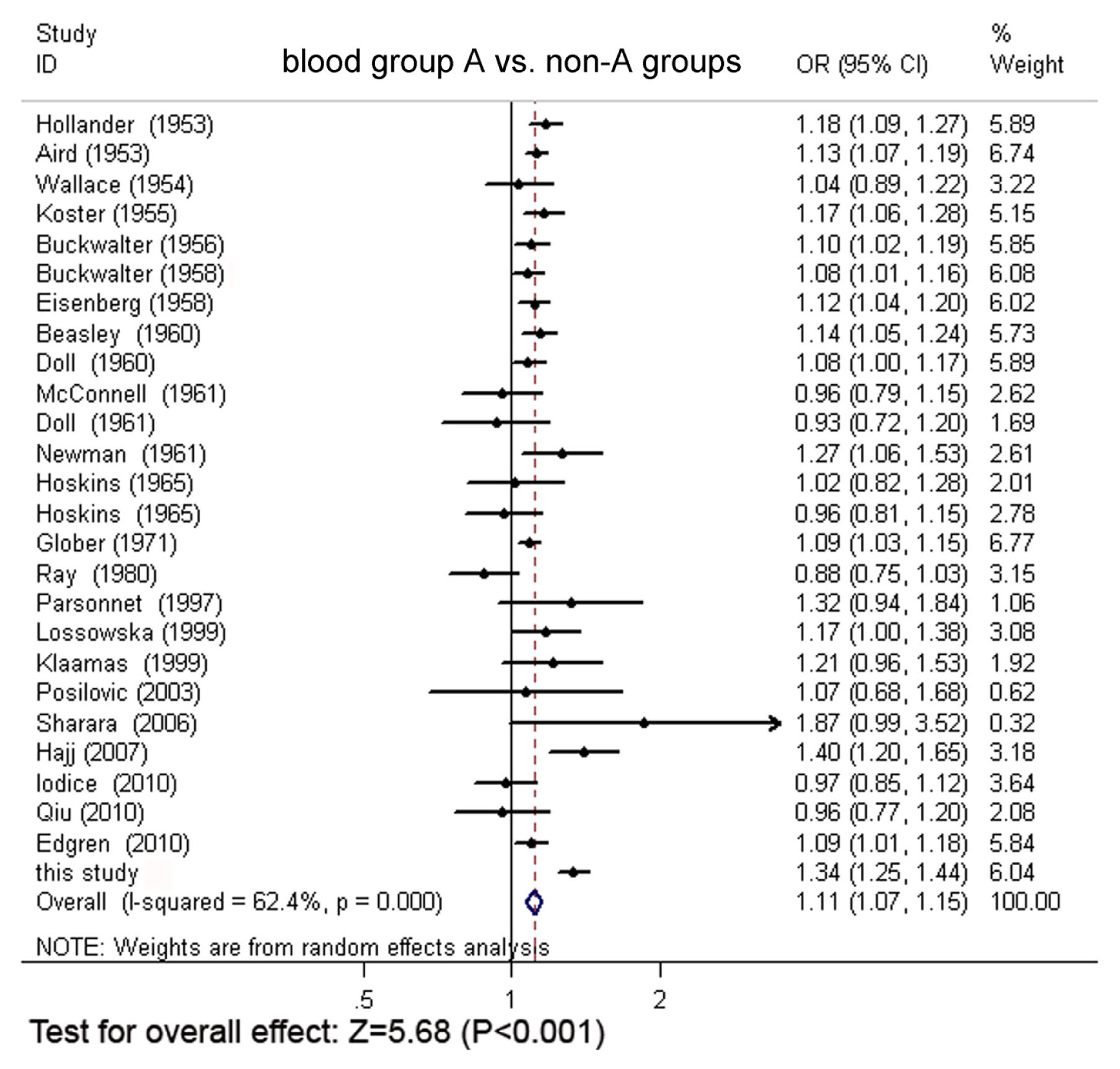