Chelation of Cu(II), Zn(II), and Fe(II) by Tannin Constituents of Selected Edible Nuts

Antioxidant Activity of a Red Lentil Extract and Its Fractions

Phenolic compounds were extracted from red lentil seeds using 80% (v/v) aqueous acetone. The crude extract was applied to a Sephadex LH-20 column. Fraction 1, consisting of sugars and low-molecular-weight phenolics, was eluted from the column by ethanol. Fraction 2, consisting of tannins, was obtained using acetone-water (1:1; v/v) as the mobile phase. Phenolic compounds present in the crude extract and its fractions demonstrated antioxidant and antiradical activities as revealed from studies using a β-carotene-linoleate model system, the total antioxidant activity (TAA) method, the DPPH radical-scavenging activity assay, and a reducing power evaluation. Results of these assays showed the highest values when tannins (fraction 2) were tested. For instance, the TAA of the tannin fraction was 5.85 μmol Trolox® eq./mg, whereas the crude extract and fraction 1 showed 0.68 and 0.33 μmol Trolox® eq./mg, respectively. The content of total phenolics in fraction 2 was the highest (290 mg/g); the tannin content, determined using the vanillin method and expressed as absorbance units at 500 nm per 1 g, was 129. There were 24 compounds identified in the crude extract using an HPLC-ESI-MS method: quercetin diglycoside, catechin, digallate procyanidin, and p-hydroxybenzoic were the dominant phenolics in the extract.
Keywords: free radicals; red lentils; phenolic compounds; tannins; HPLC-ESI-MS free radicals; red lentils; phenolic compounds; tannins; HPLC-ESI-MS

Phenolic compounds originating from edible and non-edible plant parts possess antioxidant activity. They display the capability to inhibit or delay the oxidation of lipids, proteins, and DNA by affecting the initiation or propagation of oxidizing chain reactions. Natural phenolic antioxidants can scavenge reactive oxygen and nitrogen species (RONS) thereby preventing the onset of oxidative diseases in the body [1,2]. A positive correlation between the consumption of phenolic-rich foods and a decrease of several chronic diseases has been shown to exist from epidemiological studies [3,4].
Leguminous seeds belong to plant foods which are generally rich in phenolic compounds, including condensed tannins. The antioxidant activity of phenolic compounds extracted from leguminous seeds has been investigated using several in vitro chemical assays [5–20]. Lentils are a leguminous seed that have high levels of natural antioxidants [21–27]. A number of researchers have confirmed the high antioxidant potential arising from tannin constituents present in plant extracts [28–38].
The objectives of this research were to investigate the antioxidant and antiradical activities of a crude acetone red lentil seed extract and its isolated low-molecular-weight phenolics and tannin fractions.

The content of total phenolics in fraction 1 was 3× lower than that determined in the crude extract. The highest amount (290 mg/g) was found in fraction 2 (Table 1). In fraction 1, the dominant compounds were sugars; these eluted from the column by ethanol together with low-molecular-weight phenolic compounds. The total phenolics content of the crude acetone red lentil extract, was higher than values reported for crude extracts of red bean (55 mg/g) [10] and pea (23 mg/g) [9]. A higher quantity was found, however, in the crude extracts of vetch (66 mg/g) [14], green lentil (68 mg/g) [27], and adzuki bean (90 mg/g) [11].
The marked content of total phenolics in the tannin fraction separated from the crude extract using Sephadex LH-20 column chromatography has been reported for other leguminous seeds (e.g., beach pea, faba bean, pea, vetch, adzuki, bean, green lentil) [9–11,14,31], canola hulls [30], and evening primrose [33].
The content of tannins, expressed as absorbance units at 500 nm per g, in fraction 2 (129) was nearly 2× greater than that determined in the crude extract (70). For the low-molecular-weight phenolics fraction, a vanillin-positive reaction was noted thereby suggesting that catechin/epicatechin and other flavan-3-ols had eluted from the Sephadex LH-20 column with ethanol [39]. In numerous papers, the presence of tannins has been reported in leguminous seeds [6,7,11,16,34,36,37].

The UV maxima observed from the spectra of phenolic compounds present in the crude extract as well as fractions 1 and 2 (Figure 1, Table 1) were 271, 267, and 280 nm, respectively. The wavelength of 280 nm is typical for condensed tannins [9,10]. Absorption bands (shoulders) at wavelengths ranging between 320 and 350 nm in the spectra of the crude extract and fraction 1 confirm the presence of phenolic acids, flavanones, and/or flavanans [40].

The acetonic extract of phenolic compounds from the red lentil crude extract as well as fractions 1 and 2 exhibited varying degrees of antioxidant activity in the β-carotene-linoleate model system (Figure 2). The antioxidative effect of the samples on the coupled oxidation of linoleic acid and β-carotene was greatest for the crude extract, but it is important to remember that addition of the tannin fraction to the emulsion was only at a 1 mg level. On the other hand, the tannin fraction might be quickly oxidized under the assay conditions employed and therefore not as effective an antioxidant in the emulsion model. Using the same technique, similar or lower antioxidant activities were found for extracts of leguminous seeds from faba bean, broad bean, green lentil, and everlasting bean [12,27].

2.6. Scavenging of the DPPH Radical

The strong antiradical scavenging effect of tannins separated from the red lentil acetonic extract was confirmed in the DPPH• assay (Figure 4). The tannin fraction exhibited an antiradical activity several times greater than that of the crude extract. The low-molecular-weight phenolics fraction (i.e., fraction 1) was found to be a poor scavenger of DPPH•. The antiradical activity of the tannin fraction observed in this study is in accordance with literature data. The scavenging effects of condensed tannins from beach pea, canola hulls, evening primrose, and faba bean on the DPPH radical have been described by Amarowicz et al. [31]. Radical-scavenging activity of condensed tannin polymers from several plant sources against DPPH• has been discussed by Muir [38]. Shiriwardhana and Shahidi [41] reported that a whole almond seed extract scavenged 21% (at concentration at 100 ppm) and 73% (at 200 ppm) of the DPPH radical. In one study, a 100% scavenging activity of the DPPH radical was noted for brown almond skin and green shell extracts at 100 and 200 ppm concentrations, respectively.

Authenticated red lentil seeds from the 2008 harvest were obtained from the Plant Breeding Station in Olsztyn (Poland).

Red lentils were ground in a coffee mill and defatted with hexanes in a Soxhlet apparatus for 6–8 h. Phenolic compounds were then extracted from the raw material using 80% (v/v) acetone at a solids-to-solvent ratio of 1:10 (w/v) at 50 °C for 30 min [23]. Extraction was carried out in Erlenmeyer flasks using a shaking water bath (Elpan 357, Wrocław, Poland). The extraction was repeated 2×, supernates combined, and acetone evaporated under vacuum at 40 °C using a Büchi rotary evaporator. Residual water in the extract was removed by lyophilization. The prepared extract was stored at −20 °C until analyzed.

Separation of the crude acetone extract into its low-molecular-weight phenolics and tannin fractions was achieved according to the method described by Strumeyer and Malin [44]. A 2 g portion of the crude extract was suspended in 20 mL of 95% (v/v) ethanol and applied onto a chromatographic column (5 × 40 cm) packed with Sephadex LH-20 and equilibrated with 95% (v/v) ethanol. Low-molecular-weight phenolic compounds (fraction 1) were eluted from the column using ~1 L of 95% (v/v) ethanol. To collect the tannins (fraction 2) adsorbed on the column, a second mobile phase was employed; the column was treated with 500 mL of 50% (v/v) acetone. Organic solvents were evaporated from the fractions and water from the eluent of fraction 2 was removed by lyophilization.

The content of total phenolic compounds in the crude extract and each fraction was estimated using Folin & Ciocalteu’s phenol reagent [32]. (+)-Catechin was used as a standard in this work.

The content of condensed tannins in the crude extract and its fractions was determined using the modified vanillin assay [45]. Results were expressed as absorbance units at 500 nm per 1 g extract (A500/g).

UV spectra of the extract and its fractions were recorded with a Beckman DU 7500 diode array spectrophotometer (Beckman Coulter, Inc., Brea, CA, USA).

The determination of the TAA was carried out using a Randox kit (Randox Laboratories Ltd., Crumlin, UK) according to the procedure outlined by the supplier. A concentration of 2 mg extract or fraction/mL methanol was used in the assay. Results were expressed as μmol Trolox® equivalents (eq.)/mg extract or fraction.

The antioxidant activity of the red lentil acetonic extract and its fractions was determined in an emulsion system using the method described by Miller [46]. Briefly, methanolic solutions (0.2 mL) containing 2 mg of crude extract or fraction 1, or 1 mg of fraction 2, were added to a series of tubes containing 5 mL of a prepared emulsion of linoleic acid and β-carotene stabilized with Tween 40. Immediately after addition of the emulsion to each tube, the zero-time absorbance reading at 470 nm was recorded. Samples were kept in a water bath at 50 °C and their absorbance values were recorded over a 120 min period at 15 min intervals.

3.11. Scavenging of the DPPH Radical

The scavenging effect of phenolics from the red lentil acetonic extract and its two fractions was monitored as described by Amarowicz et al. [48]. A 0.1 mL methanolic solution containing between 0.5 and 2.5 mg of the crude extract or fraction 1 and between 0.02 and 0.1 mg of fraction 2 was mixed with 2 mL of deionized water and then added to a methanolic solution of DPPH• (1 mM, 0.25 mL). The mixture was vortexed for 1 min, left to stand at room temperature for 20 min, and absorbance of the solution was then read at 517 nm with the spectrophotometer.

After HPLC separation, mass spectra were obtained using a Hewlett Packard 1100 MSD (Palo Alto, CA, USA) equipped with an API source using an electrospray ionization (ESI) interface. The conditions of analysis have been reported by Dueñas et al. [49]. The solvent gradient and column used were the same as those for HPLC-PAD analysis. ESI conditions were as follows: negative-ion mode; nitrogen was employed as the nebulizing gas at 40 psi and drying gas at 10 L/min at 340 °C; voltage at the capillary entrance, 4,000 V; and variable fragmentation voltage, 100 V (m/z 200–1,000) and 250 V (m/z 1,000–2,500). Mass spectra were recorded from an m/z of 100 to 2,500.

Chromatographic peaks were identified by comparing retention times, UV spectra, and HPLC-ESI-MS spectra with those of commercial standards (the standards employed are listed in the Materials section). Other compounds with UV spectra similar to those of hydroxycinnamates, flavanols (monomers and oligomers), gallates, flavonols, and dihydrochalcone were identified as derivatives of these compounds. Their chemical structures were confirmed by HPLC-ESI-MS.
Quantification was made by an external standard method according to the maximum of absorption for each compound. Calibration curves were prepared by injecting different volumes of standards from a stock solution over the concentration range observed for each compound. Calibration curves were then calculated as linear regressions of peak area vs concentration of the standard. The trans-p-coumaric acid derivative was quantified using the calibration curve of the corresponding free phenolic acid, (+)-catechin glucoside and (−)-epicatechin glucoside were expressed as (+)-catechin and (−)-epicatechin, respectively, while procyanidins and prodelphinidin were expressed using the calibration curve for (+)-catechin. Dihydrochalcone was expressed as phloridzin. The gallates were quantified as gallic acid and the quercetin glycosides were expressed as quercetin glucoside.

This paper describes the antioxidant and antiradical capacities of a red lentil acetone extract as well as its low-molecular-weight phenolics and tannin fractions. The tannin fraction showed the highest content of total phenolics; similar findings were found based on the tannin content, total antioxidant activity, antiradical activity, and reducing power. HPLC-PAD and HPLC-ESI-MS data revealed various classes of phenolic compounds present in the red lentil crude extract. Twenty four compounds were identified with quercetin diglycoside, catechin, digallate procyanidin, and p-hydroxybenzoic being the dominant phenolics present. Red lentil is a leguminous species that can provide an important daily source of phenolic compounds in human diets. 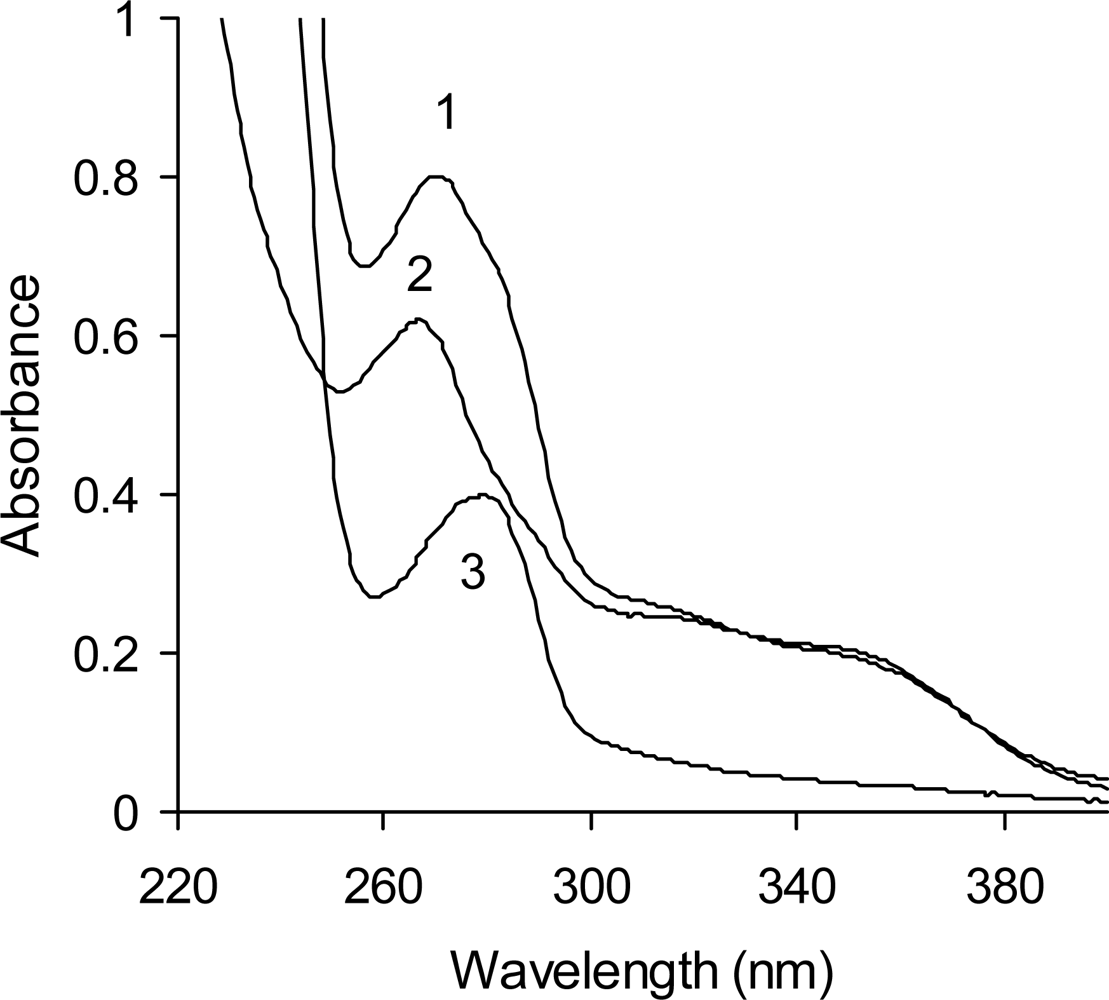 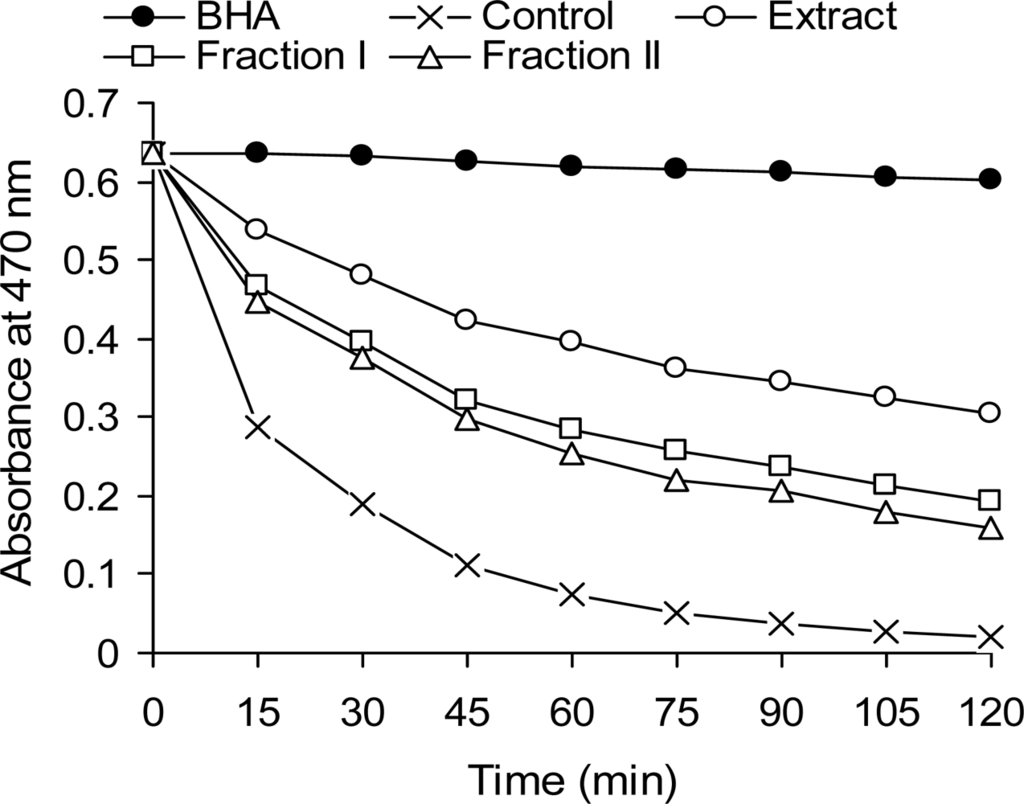 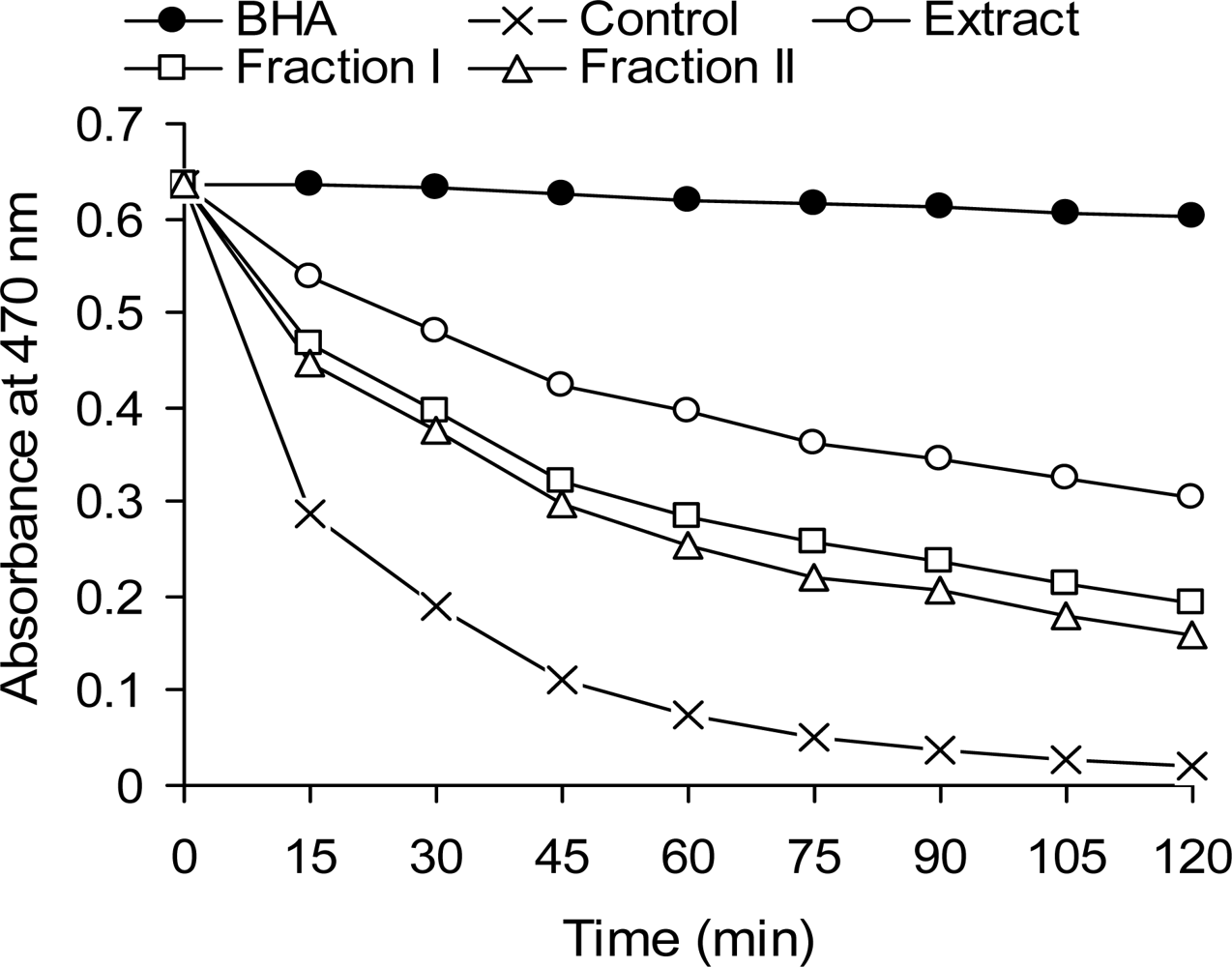 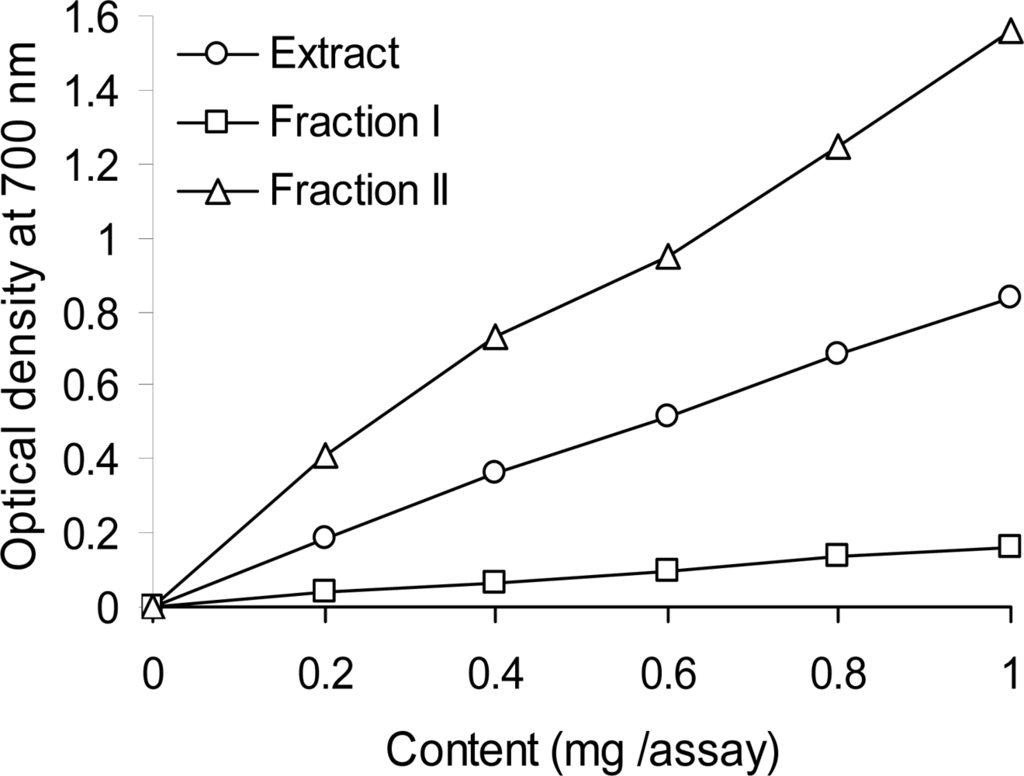 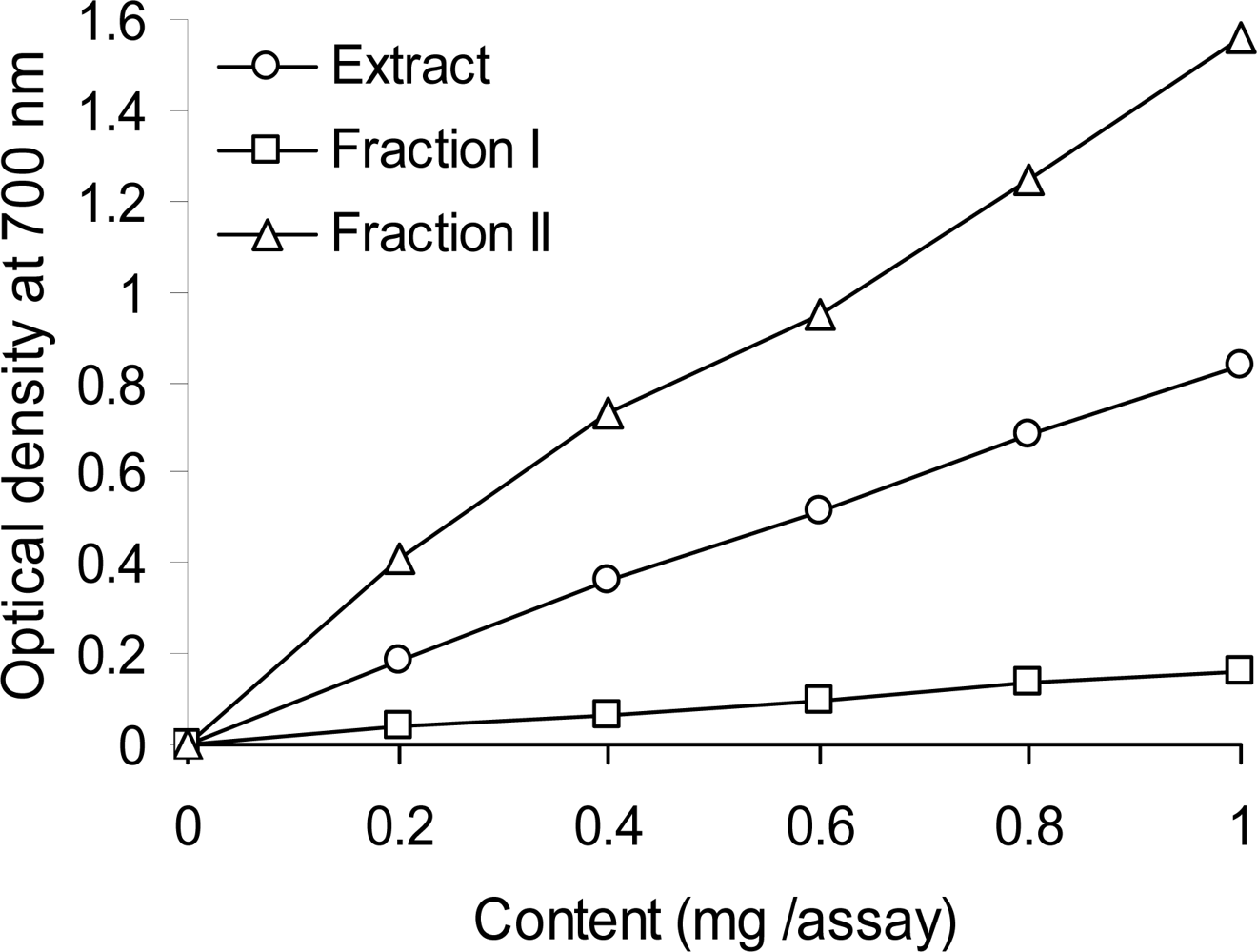 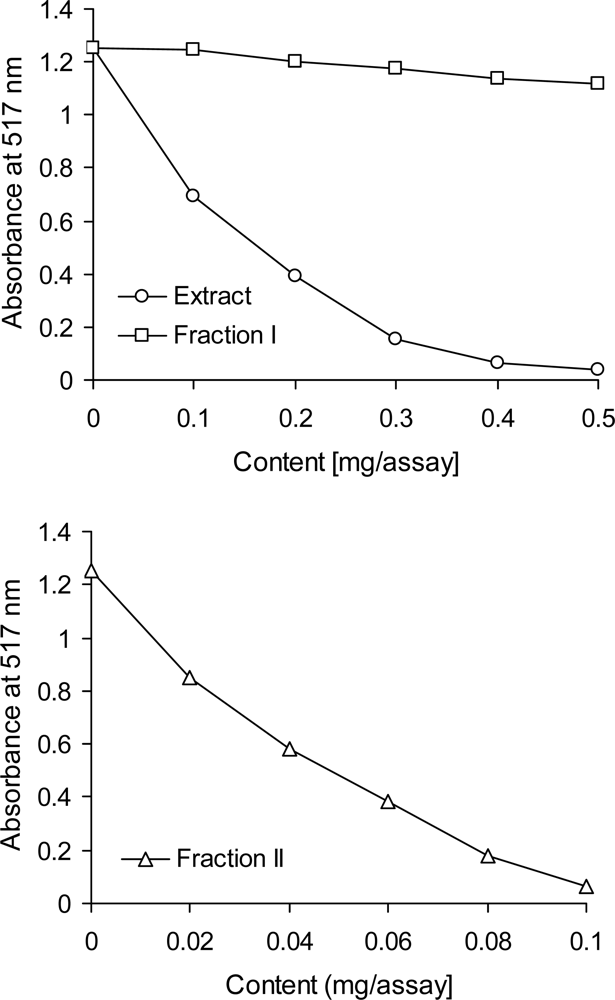