Anthelmintic Effect of Leucaena leucocephala Extract and Its Active Compound, Mimosine, on Vital Behavioral Activities in Caenorhabditis elegans
Next Article in Special Issue

Evaluation of Immunotropic Activity of Iridoid-Anthocyanin Extract of Honeysuckle Berries (Lonicera caerulea L.) in the Course of Experimental Trichinellosis in Mice
Previous Article in Journal

A Comprehensive View on the Quercetin Impact on Colorectal Cancer

Colorectal cancer (CRC) represents the third type of cancer in incidence and second in mortality worldwide, with the newly diagnosed case number on the rise. Among the diagnosed patients, approximately 70% have no hereditary germ-line mutations or family history of pathology, thus being termed sporadic CRC. Diet and environmental factors are to date considered solely responsible for the development of sporadic CRC; therefore; attention should be directed towards the discovery of preventative actions to combat the CRC initiation, promotion, and progression. Quercetin is a polyphenolic flavonoid plant secondary metabolite with a well-characterized antioxidant activity. It has been extensively reported as an anti-carcinogenic agent in the scientific literature, and the modulated targets of quercetin have been also characterized in the context of CRC, mainly in original research publications. In this fairly comprehensive review, we summarize the molecular targets of quercetin reported to date in in vivo and in vitro CRC models, while also giving background information about the signal transduction pathways that it up- and downregulates. Among the most relevant modulated pathways, the Wnt/β-catenin, PI3K/AKT, MAPK/Erk, JNK, or p38, p53, and NF-κB have been described. With this work, we hope to encourage further quests in the elucidation of quercetin anti-carcinogenic activity as single agent, as dietary component, or as pharmaconutrient delivered in the form of plant extracts. View Full-Text
Keywords: quercetin; flavonol; polyphenol; colorectal cancer; PI3K/AKT; Wnt/β-catenin; MAPK; p53; NF-κB quercetin; flavonol; polyphenol; colorectal cancer; PI3K/AKT; Wnt/β-catenin; MAPK; p53; NF-κB
►▼ Show Figures 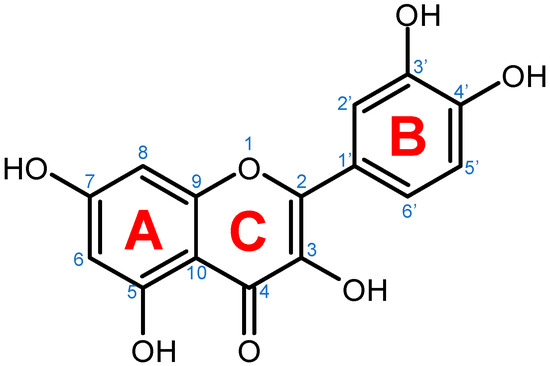