Nickel is toxic to humans. Its compounds are carcinogenic. Furthermore, nickel allergy is a severe health problem that affects approximately 10–20% of humans. The mechanism by which these conditions develop remains unclear, but it may involve the cleavage of specific proteins by nickel ions. Ni(II) ions cleave the peptide bond preceding the Ser/Thr-Xaa-His sequence. Such sequences are present in all four enzymes of the melatonin biosynthesis pathway, i.e., tryptophan 5-hydroxylase 1, aromatic-l-amino-acid decarboxylase, serotonin N-acetyltransferase, and acetylserotonin O-methyltransferase. Moreover, fragments prone to Ni(II) are exposed on surfaces of these proteins. Our results indicate that all four studied fragments undergo cleavage within tens of hours at pH 8.2 and 37 °C, corresponding with the conditions in the mitochondrial matrix. Since melatonin, a potent antioxidant and anti-inflammatory agent, is synthesized within the mitochondria of virtually all human cells, depleting its supply may be detrimental, e.g., by raising the oxidative stress level. Intriguingly, Ni(II) ions have been shown to mimic hypoxia through the stabilization of HIF-1α protein, but melatonin prevents the action of HIF-1α. Considering all this, the enzymes of the melatonin biosynthesis pathway seem to be a toxicological target for Ni(II) ions. View Full-Text
Keywords: nickel toxicity; nickel allergy; carcinogenicity; melatonin; protein damage nickel toxicity; nickel allergy; carcinogenicity; melatonin; protein damage
►▼ Show Figures 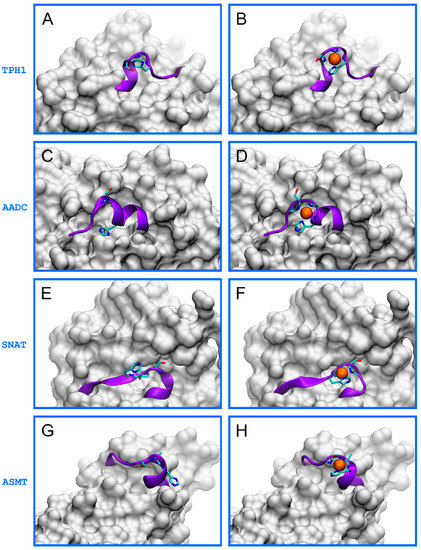