Polyphenol Profiling of Chestnut Pericarp, Integument and Curing Water Extracts to Qualify These Food By-Products as a Source of Antioxidants

The aim of this study was to characterize the phytochemical content as well as the antioxidant ability of the Moroccan species Chamaerops humilis L. Besides crude ethanolic extract, two extracts obtained by sonication using two solvents with increased polarity, namely ethyl acetate (EtOAc) and methanol-water (MeOH-H2O) 80:20 (v/v), were investigated by both spectroscopy and chromatography methods. Between the two extracts, the MeOH-H2O one showed the highest total polyphenolic content equal to 32.7 ± 0.1 mg GAE/g DM with respect to the EtOAc extract (3.6 ± 0.5 mg GAE/g DM). Concerning the antioxidant activity of the two extracts, the EtOAc one yielded the highest value (1.9 ± 0.1 mg/mL) with respect to MeOH-H2O (0.4 ± 0.1 mg/mL). The C. humilisn-hexane fraction, analyzed by GC–MS, exhibited 69 compounds belonging to different chemical classes, with n-Hexadecanoic acid as a major compound (21.75%), whereas the polyphenolic profile, elucidated by HPLC–PDA/MS, led to the identification of a total of sixteen and thirteen different compounds in both EtOAc (major component: ferulic acid: 104.7 ± 2.52 µg/g) and MeOH-H2O extracts (major component: chlorogenic acid: 45.4 ± 1.59 µg/g), respectively. The attained results clearly highlight the potential of C. humilis as an important source of bioactive components, making it a valuable candidate to be advantageously added to the daily diet. Furthermore, this study provides the scientific basis for the exploitation of the Doum in the food, pharmaceutical and nutraceutical industries. View Full-Text
Keywords: Arecaceae; polyphenols; volatile content; antioxidant activity; liquid chromatography Arecaceae; polyphenols; volatile content; antioxidant activity; liquid chromatography
►▼ Show Figures 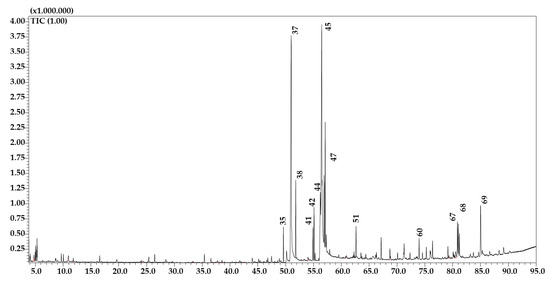