The Common Cichory (Cichorium intybus L.) as a Source of Extracts with Health-Promoting Properties—A Review
Previous Article in Journal

The identification of compounds which protect the double-membrane of mitochondrial organelles from disruption by toxic confomers of amyloid proteins may offer a therapeutic strategy to combat human neurodegenerative diseases. Here, we exploited an extract from the marine brown seaweed Padina pavonica (PPE) as a vital source of natural bioactive compounds to protect mitochondrial membranes against insult by oligomeric aggregates of the amyloidogenic proteins amyloid-β (Aβ), α-synuclein (α-syn) and tau, which are currently considered to be major targets for drug discovery in Alzheimer’s disease (AD) and Parkinson’s disease (PD). We show that PPE manifested a significant inhibitory effect against swelling of isolated mitochondria exposed to the amyloid oligomers, and attenuated the release of cytochrome c from the mitochondria. Using cardiolipin-enriched synthetic lipid membranes, we also show that dye leakage from fluorophore-loaded vesicles and formation of channel-like pores in planar bilayer membranes are largely prevented by incubating the oligomeric aggregates with PPE. Lastly, we demonstrate that PPE curtails the ability of Aβ42 and α-syn monomers to self-assemble into larger β-aggregate structures, as well as potently disrupts their respective amyloid fibrils. In conclusion, the mito-protective and anti-aggregator biological activities of Padina pavonica extract may be of therapeutic value in neurodegenerative proteinopathies, such as AD and PD. View Full-Text
Keywords: Padina pavonica seaweed extract; Alzheimer’s disease; Parkinson’s disease; mitochondria; amyloidogenic proteins; membrane permeabilization Padina pavonica seaweed extract; Alzheimer’s disease; Parkinson’s disease; mitochondria; amyloidogenic proteins; membrane permeabilization
►▼ Show Figures 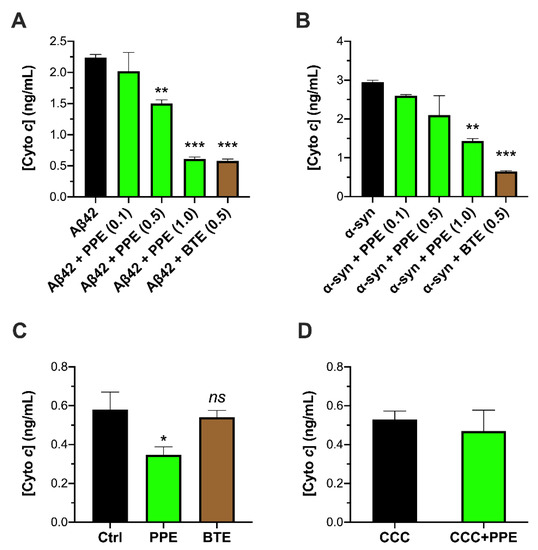