People in modern organizational society deal with excessive stress due to complex interpersonal relationships, heavy workloads, and fatigue. Excessive stress causes psychological instability and disrupts the balance of the autonomic nervous system, which maintains homeostasis, leading to cardiovascular and cerebrovascular diseases, hormonal imbalance, and sleep disturbance [1,2,3]. Sleep is essential for regulating the physiological processes in the human body, and a lack of sleep causes physical problems, such as gastrointestinal diseases, muscle pain, and fatigue, as well as mental problems such as anxiety and depression. Stress can also cause sleep disorders in people [4,5]. There are many causes of sleep disturbances, such as stress, tension, and anxiety. Benzodiazepine drugs such as benzodiazepine receptor agonists and antidepressants with sedative actions are used to treat these sleep disorders. The use of these sleep-disrupting drugs is not suitable for people experiencing early or temporary sleep disturbances, because tolerance and dependence are formed when these drugs are used for a long time [6,7]. Therefore, the development of various natural products that can improve sleep disorders with few side effects has progressed.
Among the natural products showing sleep-promoting activity, hops have been used as nervous stabilizers, hypnotic agents, anti-inflammatory agents, and blood sugar-lowering agents since ancient times [8]. The yellow-green flowers of hops (Humulus lupulus L.) belonging to the Cannabinaceae family are used as raw materials for beer and give beer its characteristic bitter taste and aroma [9]. It has been reported that the sedative activity of hops is mainly due to flavonoids such as bitter acids and xanthohumol. α-bitter acids are composed of humulone (35–70%), cohumulone (20–65%), and adhumulone (10–15%) and are known to have anti-inflammatory, anticancer, and antibacterial effects, as well as sedative effects [10]. In particular, humulone has been reported to act directly on GABAA receptors [11]. Xanthohumol binds to GABAA receptors and exhibits sleep-promoting activity and is known to exhibit antioxidant and anti-inflammatory effects [12,13]. Differences occur in the polyphenol content, the major component, of hops and depend on the harvest time and variety. Therefore, different hop varieties show different sleep-promoting activities, depending on the flavonoid content.
We selected hop varieties Saaz and Saphir based on previous studies, which reported that these varieties have excellent sleep-promoting activities among industrially used hop varieties. Among the selected hops mixtures, the administration of a 75:25 mixture of Saaz–Saphir showed high sleep-promoting activity in the pentobarbital-induced sleep test. In this study, the effect of the Saaz–Saphir mixture (75:25) on sleep time and quality was elucidated by a EEG analysis in the rodent model, and the receptors involved in sleep activity were elucidated through an antagonist-binding analysis.

2.1. Sleep Latency and Sleep Duration of the Saaz–Saphir Mixture

2.2. EEG Analysis by Administration of the Saaz–Saphir Mixture

2.3. EEG Analysis by Administration of the Saaz–Saphir Mixture in the Caffeine-Induced Insomnia Model

2.4. Changes of GABA and Receptor Expression Levels in Mouse Brain by Oral Administration of the Saaz–Saphir Mixture

2.5. Receptor Binding Mode of the Saaz–Saphir Mixture by Antagonists

The hop pellet samples Saaz and Saphir were provided by the Lotte R&D Center (Seoul, Korea). Hops dried at 50–60 °C (moisture content 8–10%) were crushed using a hammer mill and then pelletized. Ethanol (70%), corresponding to 25 times the amount of hops (200 g), was added, followed by a reflux extraction at 95 °C for 1 h, and the reflux extraction was performed twice. The extract was then filtered (Whatman No. 1), concentrated under reduced pressure, and lyophilized.

The Institute of Cancer Research (ICR) male mice (6-week-old) were purchased from Orient Bio (Sungnam, Korea). In the animal breeding room, the temperature was 21 ± 1 °C, the relative humidity was 50–55%, a 12-h cycle of light and dark was maintained, and drinking water and food were provided ad libitum. The animals were used for the experiments after a one-week adaptation period. After fasting for 24 h before the pentobarbital-induced sleep test, the hops extract was orally administered 40 min before the pentobarbital injection, and pentobarbital was injected intraperitoneally at a concentration of 42 mg/kg to measure the sleep latency and sleep duration [29]. The sleep time was recorded until recovery of the upright reflex, and the experimental animals whose sleep was not induced within 15 min after pentobarbital administration were excluded from the experiment. All animal experiments were conducted with the approval of the Korea University Institutional Animal Care and Use Committee (KUIACUC-2021-0020).

The EEG analysis was performed according to a previously described experimental method [14]. Sprague–Dawley (SD) male rats (5-week-old) purchased from Orient Bio were anesthetized by inhalation with isoflurane, and EEG electrodes were inserted. After the operation was completed, the animals were allowed to recover for a week, and then, an EEG transmitter (EMKA Technologies, Paris, France) was attached. The EEG was measured at 15 mm/s for 7 h from 10 a.m. to 5 p.m. from the time the sample was orally administered.
The EEG was also analyzed in the caffeine-induced SD rat arousal model. The experimental groups were a normal control group (NOR), a negative control group (CON, caffeine-treated group), a positive control group (BDZ), and a group administered with the Saaz–Saphir mixture (Mix 75:25). Caffeine at a concentration of 10 mg/kg was administered together with the hops sample in all the groups except for the NOR group [29]. At this time, alprazolam, a benzodiazepine of 0.2 mg/kg, was administered to the BDZ group.

4.5. Analysis of the Receptor Binding Mode Using an Antagonist

An experiment on the receptor binding mode by the antagonist was carried out in a pentobarbital-induced sleep model. The normal control group (NOR) was treated with saline, and the Saaz–Saphir mixture (75:25) was administered at 150 mg/kg and xanthohumol (Sigma-Aldrich, St Louis, MO, USA) and humulone (Aobious, Gloucester, MA, USA) at 20 mg/kg. Using edible oil, 6 mg/kg of bicuculline (Sigma-Aldrich) and 4 mg/kg of picrotoxin (Sigma-Aldrich) were intraperitoneally injected (i.p.) 30 min before hop extract administration [31]. Sleep latency and sleep duration were measured under the same conditions as in the pentobarbital sleep induction experiment.

All animal experiments were conducted under the approval of the Korea University Institutional Animal Care and Use Committee (KUIACUC-2021-0020).

The authors declare no conflict of interest. The funders had no role in the design of the study; in the collection, analyses, or interpretation of the data; in the writing of the manuscript; or in the decision to publish the results.

Samples of the ethanolic hop extract are available from the first author, Byungjick Min. 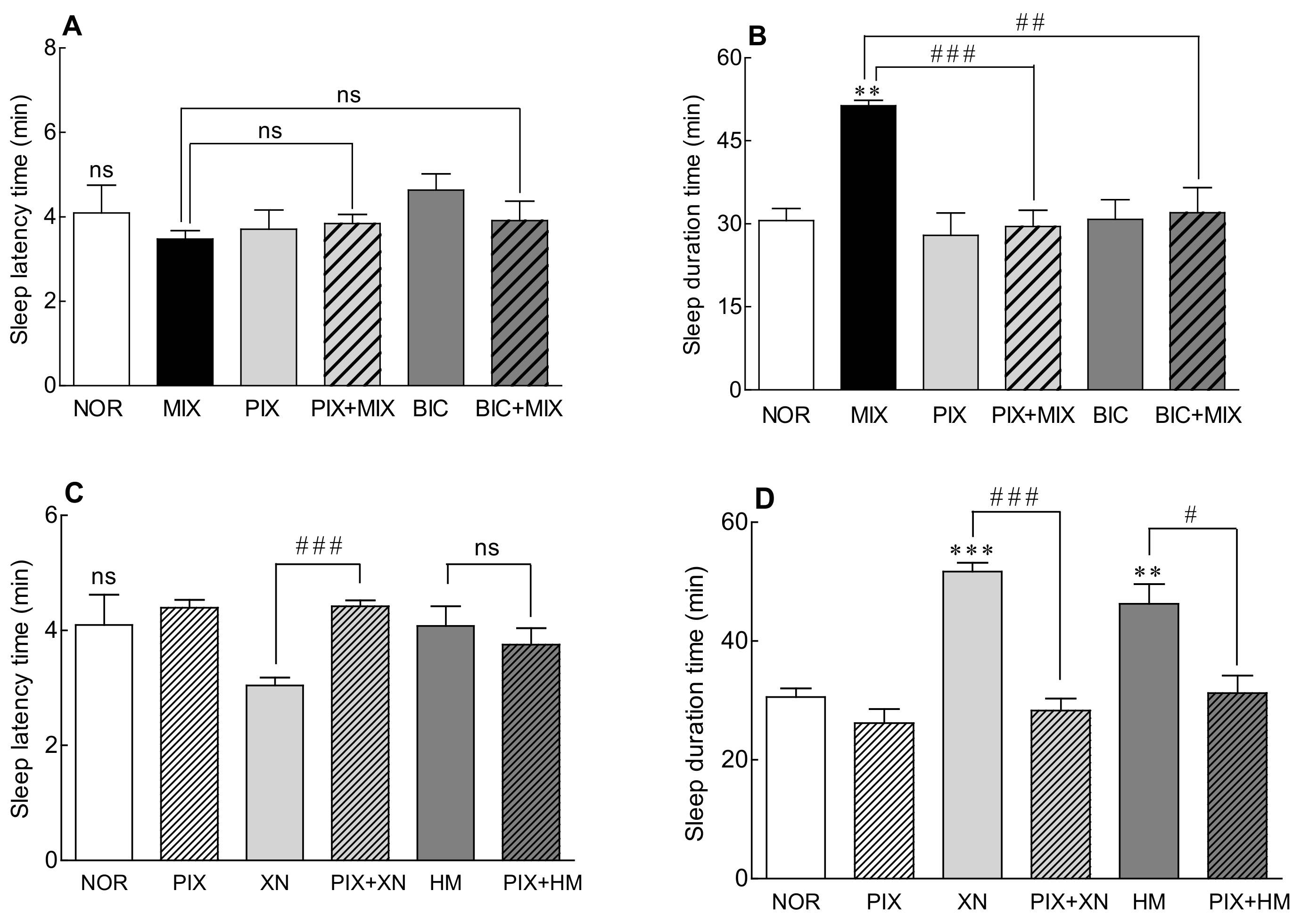