Identification of Antiprotozoal Compounds from Buxus sempervirens L. by PLS-Prediction

The leaves of Ranunculus multifidus Forsk. are traditionally used for the treatment of malaria in several African countries. In the present study, 80% methanol (RM-M) and hydrodistilled (RM-H) extracts of fresh leaves from R. multifidus and its major constituent anemonin were tested for their in vivo antimalarial activity against Plasmodium berghei in mice. Anemonin was also tested for its in vitro antimycobacterial activity against Mycobacterium smegmatis and M. abscessus in a microbroth dilution assay, and bacterial growth was analyzed by OD measurement. The isolation of anemonin from RM-H was carried out using preparative thin layer chromatography (PTLC). The chemical structures of anemonin and its hydrolysis product were elucidated using spectroscopic methods (HR–MS; 1D and 2D-NMR). Results of the study revealed that both RM-M and RM-H were active against P. berghei in mice, although the latter demonstrated superior activity (p < 0.001), as compared to the former. At a dose of 35.00 mg/kg/day, RM-H demonstrated a chemosuppression value of 70% in a 4-day suppressive test. In a 4-day suppressive, Rane’s and prophylactic antimalarial tests, anemonin showed median effective doses (ED50s) of 2.17, 2.78 and 2.70 μM, respectively. However, anemonin did not inhibit the growth of M. smegmatis and M. abscessus. View Full-Text
Keywords: Ranunculus multifidus; 4-day suppressive test; Rane’s test; prophylactic test; anemonin Ranunculus multifidus; 4-day suppressive test; Rane’s test; prophylactic test; anemonin
►▼ Show Figures 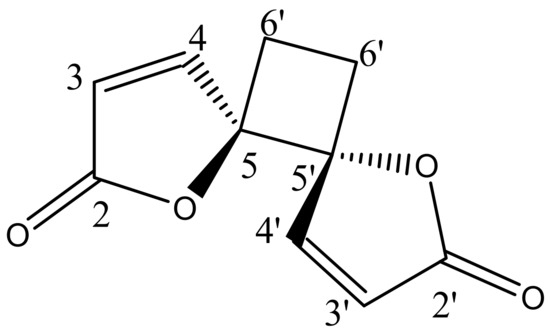