Organic Nanocarriers for Bevacizumab Delivery: An Overview of Development, Characterization and Applications
Next Article in Special Issue

Ikhlas A. Khan
3 and

The goal of this study was to assess the pharmacological effects of black tea (Camellia sinensis var. assamica) water extract on human kinin-forming enzymes in vitro. Tea is a highly consumed beverage in the world. Factor XII (FXII, Hageman factor)-independent- and -dependent activation of prekallikrein to kallikrein leads to the liberation of bradykinin (BK) from high-molecular-weight kininogen (HK). The excessive BK production causes vascular endothelial and nonvascular smooth muscle cell permeability, leading to angioedema. The prevalence of angiotensin-converting enzyme inhibitor (ACEI)-induced angioedema appears to be through BK. Both histamine and BK are potent inflammatory mediators. However, the treatments for histamine-mediated angioedema are unsuitable for BK-mediated angioedema. We hypothesized that long-term consumption of tea would reduce bradykinin-dependent processes within the systemic and pulmonary vasculature, independent of the anti-inflammatory actions of polyphenols. A purified fraction of the black tea water extract inhibited both kallikrein and activated FXII. The black tea water extracts inhibited factor XII-induced cell migration and inhibited the production of kallikrein on the endothelial cell line. We compared the inhibitory effects of the black tea water extract and twenty-three well-known anti-inflammatory medicinal herbs, in inhibiting both kallikrein and FXII. Surprisingly, arjunglucoside II specifically inhibited the activated factor XII (FXIIa), but not the kallikrein and the activated factor XI. Taken together, the black tea water extract exerts its anti-inflammatory effects, in part, by inhibiting kallikrein and activated FXII, which are part of the plasma kallikrein–kinin system (KKS), and by decreasing BK production. The inhibition of kallikrein and activated FXII represents a unique polyphenol-independent anti-inflammatory mechanism of action for the black tea. View Full-Text
Keywords: kinins; inflammation; angioedema kinins; inflammation; angioedema
►▼ Show Figures 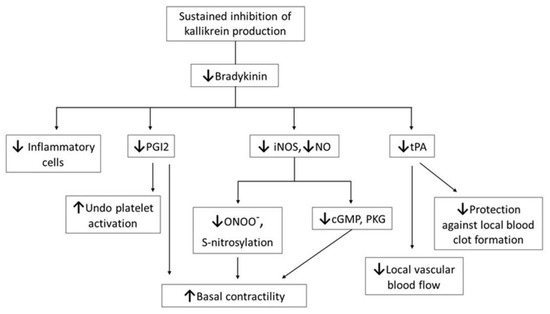