:
An HS-SPME GC-MS analysis of the volatile compounds adsorbed at the outer surface of lemon and grapefruit pectins obtained via the hydrodynamic cavitation of industrial waste streams of lemon and grapefruit peels in water suggests important new findings en route to understanding the powerful and broad biological activity of these new pectic materials. In agreement with the ultralow degree of esterification of these pectins, the high amount of highly bioactive α-terpineol and terpinen-4-ol points to limonene (and linalool) decomposition catalyzed by residual citric acid in the citrus waste peel residue of the juice industrial production.
Keywords:
IntegroPectin; lemon; grapefruit; pectin; waste citrus peel; α-terpineol; hydrodynamic cavitation; circular economy 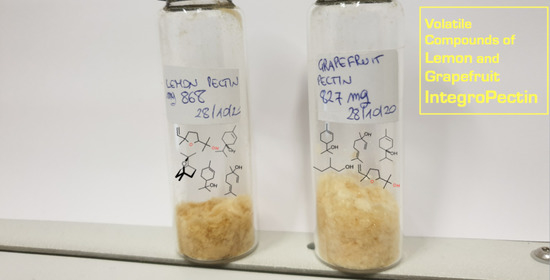 Industrially extracted from dried lemon (and also orange and lime) peel and in a far lesser amount from apple pomace, pectin is a versatile hydrocolloid that is in high and rapidly increasing demand from the food and pharmaceutical industries [1]. The extraction makes use of diluted mineral or oxalic acid in hot water and employs isopropyl alcohol to precipitate the polysaccharide after the extraction and extensive polymer degradation. Plentiful research has been devoted in the last decade to developing green extraction methods for pectin. Selected achievements include microwave-assisted extraction in water only [2], acoustic cavitation [3], hydro-distillation driven by concentrated solar power [4], enzymatic extraction at acidic pHs [5], and controlled hydrodynamic cavitation (HC) in water only [6]. Lately called “the enabling technology of the bioeconomy” due to its low capital and operational cost, eco-friendly nature, and ease of scaling up [7], HC is increasingly used in the extraction of natural products [8].
Dubbed “IntegroPectin”, citrus pectin extracted from the wet peel of the main citrus fruits residue of the juice production process using HC largely differs from the conventional citrus pectin extracted from dried citrus peel using acid in hot water. Orange IntegroPectin, for instance, has a low degree of esterification (17%) and contains plentiful amounts of co-extracted citrus flavonoids and terpenes [6]. The potential antiviral activity of the main orange flavonoids hesperidin and naringin, for instance, raised interest in HC as an efficient and highly scalable flavonoid production method for the treatment of COVID-19 [9].
Lemon IntegroPectin—namely, citrus pectin extracted from wet industrial waste lemon peel using HC—has exceptional antioxidant [10] and good antibacterial [11] properties, whereas grapefruit IntegroPectin is a broad-spectrum bactericidal agent currently investigated as a natural antimicrobial likely to drive no antimicrobial resistance [12]. Recently named “a universal medicine” in light of its multiple health-beneficial properties (immunomodulating, anticarcinogenic, and antimetastatic properties; anti-inflammatory activity; lowering cholesterol and triglyceride in the blood serum; normalizing glucose metabolism; removing toxins including radionuclides from the body; protecting the gastrointestinal tract) [13], pectin is also a broad-spectrum antibacterial whose antimicrobial properties have been lately rediscovered [14]. It is therefore important, in sight of the medical applications of these new citrus pectins collectively called IntegroPectin, that lemon IntegroPectin is highly cytoprotective, preventing the oxidative degradation of human pulmonary cells from oxidizing agents even at high concentrations of a strong oxidizer such as H2O2 [10].
The main aim of the study was to analyze the volatile compounds in both lemon and grapefruit IntegroPectin in order to identify the main terpene components of these new and highly bioactive materials, after having identified at least in part the main structural features of the pectic polymers comprising orange [6] and lemon and grapefruit [12]. Indeed, we ascribed the high antimicrobial activity of lemon and grapefruit IntegroPectin to the synergistic action of the chemical structure of citrus pectin extracted using cavitation, combined with the action of the citrus terpenes and flavonoids adsorbed across the pectic polymer obtained upon the lyophilization of the aqueous extract [12]. We briefly remind the reader that no terpenes or flavonoids are found in commercial citrus pectins, as these secondary metabolites are completely removed during the hydrothermal extraction from dried citrus (lemon, orange, and lime) peel using mineral (or oxalic) acid followed by extensive refining and the precipitation of the largely degraded pectic polymer with isopropyl alcohol [1].
The outcomes of this investigation using the headspace solid-phase microextraction (HS-SPME) technique combined with gas chromatography-mass spectrometry (GC-MS) indirectly provide molecular insight into the HC-assisted extraction of both terpenes and pectin from cells comprising waste citrus peel (exo-, meso-, and endocarp) obtained by citrus juice production lines.

The GC-MS analysis of the volatile compounds released in the headspace of a closed vial upon their solid phase microextraction (SPME) using a thin polymer coating fixed to the solid surface of a fiber [36] enables the direct identification of the volatile compounds by comparison with the mass spectra of authentic standards. The technique, for example, has been widely used to identify volatiles in the fragrances of lemon cultivars [37]. The analytical conditions used in the present study appear in Table 3.

Lemon and grapefruit IntegroPectin samples were left in closed vials (Figure 4) at room temperature to equilibrate for 24 h before sampling. The extraction of volatile components accumulated in the headspace took place by injecting the coated fiber in the headspace and leaving the fiber to adsorb the volatiles for 2 min, after which the fiber was withdrawn from the vial and inserted in the hot (260 °C) GC injector.
In order to avoid carry over effects or artifact formation, blank runs were carried out every three analyses. Prior to use and between consecutive analyses, the fiber was conditioned in a GC injector at 260 °C for 3 h to remove contaminants. Nonetheless, siloxane contaminants most likely derived from the injector led to the appearance of interference siloxane peaks in the chromatogram that were readily identified. The fiber used for sampling both lemon and grapefruit pectin used a divinylbenzene/carboxen/polydimethylsiloxane (DVB/CAR/PDMS, 50 μm the DVB layer and 30 μm the CAR/PDMS layer) coating suitable for analyte group flavors (volatiles and semivolatiles). In order to assess the best extraction time for this coating, several preliminary tests at increasing extraction times (2, 5, and 15 min) were investigated (data not shown). The 2 min microextraction time was identified as optimal to reproduce the extraction procedure.

An ISQ LT single quadrupole mass spectrometer (Thermo Fisher Scientific, Waltham, MA, USA) next to a Trace 1310 gas chromatograph (Thermo Fisher Scientific, Waltham, MA, USA) equipped with a Trace TR-FAME, 100 m × 0.25 mm I.D., 0.20 μm (Thermo Fisher Scientific, Waltham, MA, USA) was used for the GC-MS analyses. The oven temperature program was from 50 °C (hold 0 min) at 10 °C/min to 250 °C, then held for 5 min. The carrier gas was ultrapure helium (He ≥ 99.9999%, ALPHAGAZ 2, Air Liquide Italia Service, Milan, Italy) flown at a 1 mL/min rate. Injection took place in splitless mode at 260 °C. The mass analysis was carried out under conditions of electronic ionization (EI) with an ionization energy of 70 eV. The mass spectra were recorded in full scan in a mass range ranging from 50 to 500 m/z. The attribution of compounds corresponding to the chromatographic peaks was performed by comparing the corresponding mass spectra with those of the NIST 11.0 and Wiley 7.0 mass spectrum libraries, verifying the fragmentation through a careful study of the EI spectra.

The HS-SPME-GC-MS analysis of the volatile compounds of lemon and grapefruit pectins obtained via the hydrodynamic cavitation of lemon and grapefruit peel residue of juice extraction suggests important new findings en route to understanding the high biological activity of these new pectic materials and the hydrodynamic cavitation process applied to wet (i.e., non-dried) waste citrus peel.
The high amount of the highly bioactive terpenoids α-terpineol and terpinen-4-ol points to the conversion of limonene (and linalool) upon protonation and hydration, a process catalyzed by the citric acid present in the endocarp fraction of waste citrus peel and further accelerated under cavitation conditions. This hypothesis also explains the ultralow degree of the esterification of lemon (DE = 8%), grapefruit (DE = 14%), and orange (DE = 17%) IntegroPectin polymers, opening the route to new medical and biotechnological applications of these citrus pectins useful in the nutraceutical, pharmaceutical, food, and personal care/cosmetic industries. For example, scholars in Brazil recently discovered the bactericidal activity of α-terpineol against S. aureus strains, interrupting cell division and altering the “grape bunch” morphology typical of S. aureus colonies [38]. The findings reported in this study support the similar antimicrobial action of α-terpineol in lemon and grapefruit IntegroPectin [12]. The forthcoming analysis of the flavonoids present in these materials will shed further light on the bioactivity of these new pectic polymers.

The APC was sponsored by MDPI.

All data available by contacting the corresponding authors.

This study is dedicated to Roberto Dal Bosco for many years of friendship with one of us (M.P.). We thank OPAC Campisi (Siracusa, Italy) for kindly providing the waste lemon and grapefruit peel from which the IntegroPectin materials were isolated. 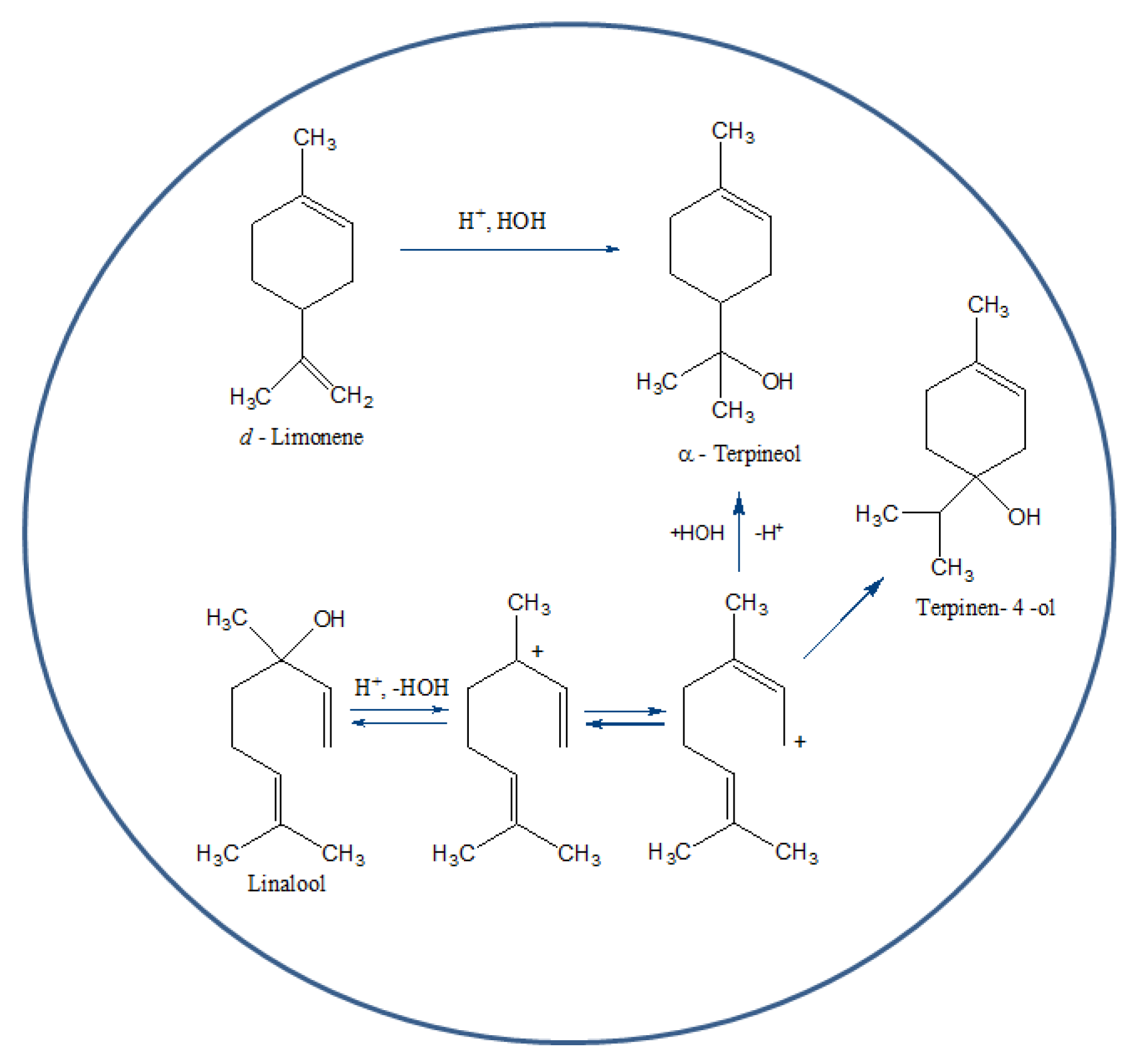 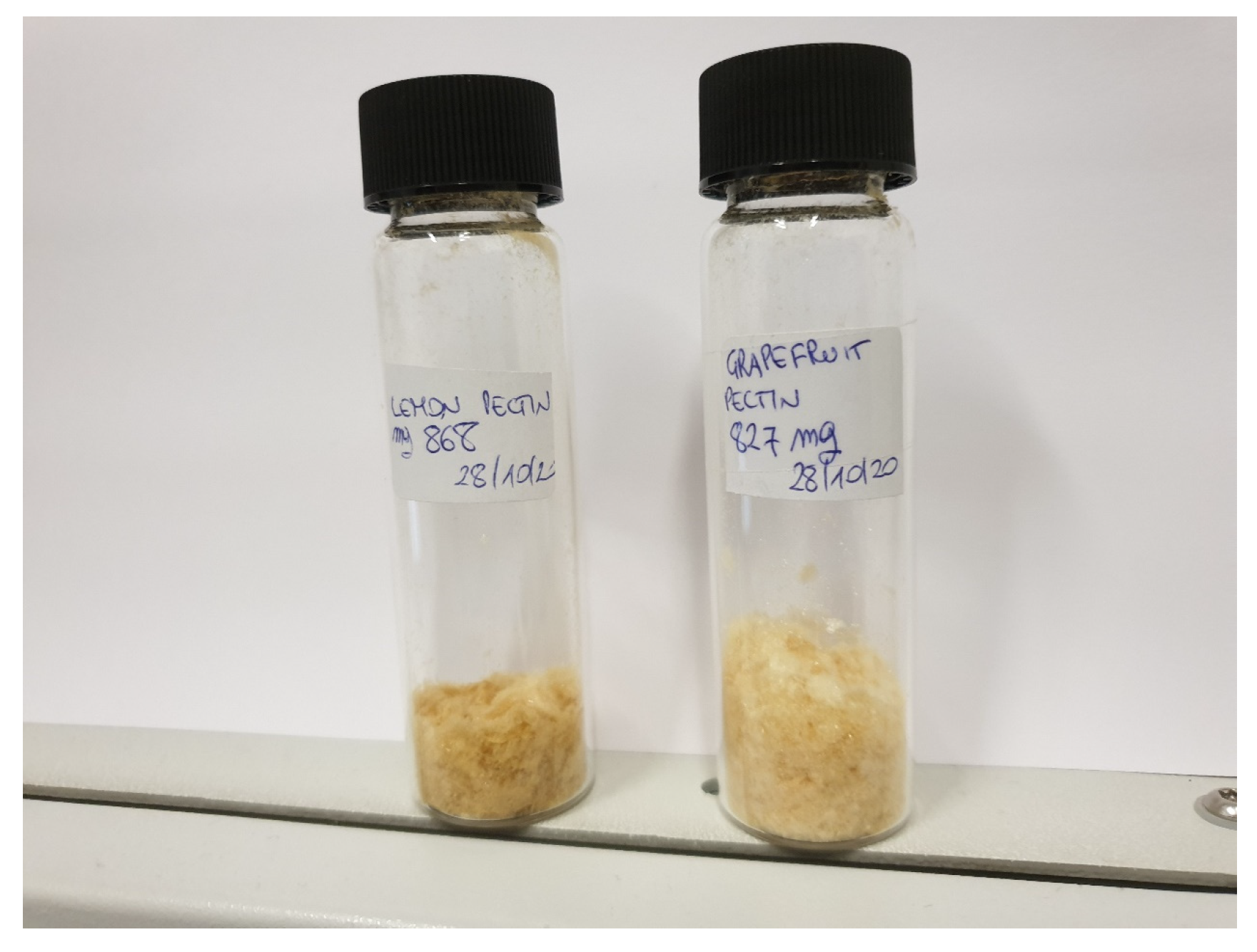