Study of Antibacterial and Anticancer Properties of bioAgNPs Synthesized Using Streptomyces sp. PBD-311B and the Application of bioAgNP-CNC/Alg as an Antibacterial Hydrogel Film against P. aeruginosa USM-AR2 and MRSA
Previous Article in Journal

Bacterial cellulose (BC) is a natural polymer that has fascinating attributes, such as biocompatibility, low cost, and ease of processing, being considered a very interesting biomaterial due to its options for moldability and combination. Thus, BC-based compounds (for example, BC/collagen, BC/gelatin, BC/fibroin, BC/chitosan, etc.) have improved properties and/or functionality, allowing for various biomedical applications, such as artificial blood vessels and microvessels, artificial skin, and wounds dressing among others. Despite the wide applicability in biomedicine and tissue engineering, there is a lack of updated scientific reports on applications related to dentistry, since BC has great potential for this. It has been used mainly in the regeneration of periodontal tissue, surgical dressings, intraoral wounds, and also in the regeneration of pulp tissue. This review describes the properties and advantages of some BC studies focused on dental and oral applications, including the design of implants, scaffolds, and wound-dressing materials, as well as carriers for drug delivery in dentistry. Aligned to the current trends and biotechnology evolutions, BC-based nanocomposites offer a great field to be explored and other novel features can be expected in relation to oral and bone tissue repair in the near future.
Keywords: bacterial cellulose; biomaterials; nanocomposites; tissue engineering; guided tissue regeneration bacterial cellulose; biomaterials; nanocomposites; tissue engineering; guided tissue regeneration

Biocompatible materials and devices have attracted a great deal of interest over the past years in the medical field. Ongoing efforts from many researchers are providing novel systems that mimic the main peculiar details of native tissues. Particularly, biocompatible materials engineered with improved functionalities and complex design have been proved to offer better cell adhesion, proliferation, and differentiation [1,2,3,4].
Generally, biomaterials are in direct contact with biological tissues and they can be defined as part of a system that deals with improving or replacing any tissue, organ, or body function [5]. Therefore, it is fundamental to carefully consider some requirements to appoint a material as a biomaterial, such as excellent biocompatibility and biodegradability and lack of toxicity.
According to its chemical nature, biomaterials can be broadly classified into two main categories: (I) Natural biomaterials, for example, collagen, silk, keratin, elastin, most polysaccharides, and tissues, such as bovine pericardium; and (II) synthetic biomaterials, which include ceramics, synthetic polymers, metals and alloys, and composites. Although their obtention is simple with a relatively low cost, they can cause some collateral effects.
Noteworthy, natural biomaterials directly help in regulation of the cellular phenotype [1,6,7] in addition to enhancement of tissue biocompatibility. As an example, collagen, a natural polymer, is the main organic compound of bone tissue, being widely explored in manufacturing biomaterials. However, its high cost, handicap in quality control related to contaminations, and standard commercial sources are challenging issues that hinder its use [8].
Naturally occurring biopolymers, viz. collagen, hyaluronan, gelatin, chitosan, and cellulose, are being explored in dentistry because their properties are like those of the native tissue. Several strategies were carried out to produce BC micro and nanocomposites for different biological and technological applications [9]. In particular, there is an emerging and appealing interest in bacterial cellulose towards its use as dental material [10,11]. In the pursuit to outline the known applicability and explore the ongoing efforts of BC in odontology, this review highlights in detail several up-do-date reports covering biomedical applications of BC in implants and scaffolds for tissue engineering, carriers for drug delivery, wound dressing, and applications related to dental materials as graphically summarized in Figure 1.

Plant cellulose is the most abundant natural biopolymer on Earth, being harvested mainly from trees and cotton. Additionally, cellulose can also be produced by a wide variety of living species, such as microorganisms. Specifically, the production of cellulose from bacteria sources was first reported by Brown in 1886 [12]. Brown observed that the Gram-negative bacteria Komagataeibacter xylinus (previously named as Gluconacetobacter xylinus) was the only known species capable of producing cellulose on an industrial scale. Today, there are several Gram(-) bacteria able to produce BC, such as Agrobacterium, Pseudomonas, Rhizobium, and Escherichia spp. In an appropriate medium, these bacteria secrete an abundant 3-D network of cellulose fibrils under aerobic conditions, using glucose and other saccharides as a carbon source. The BC fibrils are condensed in a network located in the interphase of the culture media-air. The macroscopic aspect of the BC membrane is similar to a gel (Figure 2a), whose form and thickness depend on the recipient and cultivation time, respectively.
In terms of composition, BC has a structure very similar to plant cellulose but with superior physicochemical properties [13]. This feature is mainly addressed to the well-arranged 3-D network of fibers with diameters ranging from 3.0 to 3.5 μm (as shown in Figure 2b), which in turn are assembled by bundles of thinner cellulosic fibers with diameter sizes down to the micro- and nanoscale. Compared to plant cellulose, BC fibers are free of lignin and hemicellulose, contain small fibrils (100 times lower than plant cellulose), and have a highly crystalline structure [13,14,15,16]. Additionally, BC can be sterilized through many treatments, such as heat, steam, ethylene oxide gas, and radiation, without losing its intrinsic physicochemical properties and structural integrity.
BC fibrils are biosynthesized by polymerization of UDP-glucose into α-1,4-glucan chains by multienzymatic complex in several steps. BC fibers possess a strong tendency for self-assembly and form an extended network via both intramolecular and intermolecular hydrogen bonds due to their strong surface-interacting hydroxyl groups [17,18], enabling the production of sheets with a high surface area and porosity. Because of its uniform structure and morphology, the BC is endowed with peculiar characteristics, such as a high water retention capacity, high purity and crystallinity, good chemical stability, and remarkable mechanical properties [16]. Notwithstanding, BC unveils an exciting class of nanomaterial and an ideal starting point for useful biomaterials to be applied in therapeutics.
BC can be obtained from bacterial cultures in many formats and for different purposes, such as membranes under static culture conditions, and as micro- or nano-structures in shaken cultures. Alternatively, BC membranes can be processed to obtain microcrystals by physical (i.e., sonication) and/or chemical (i.e., sulfuric and nitric acids, periodate, etc.) treatment [19,20], or by enzymatic modification to produce nanofibrils [21].
With regards to physical, mechanical, and biological properties Czaja et al. [22] reported that BC could act as a physical barrier against microbial infections. Besides its low cost, BC is a biomaterial of feasible sterilization and manipulation, and is a non-allergenic and non-toxic material. In addition, the same authors reported that BC may significantly decrease pain when applied as a dressing material during certain topical treatments.
The literature describes several in vivo studies in which BC was applied, from the replacement of abdominal skin [23], dorsal implants [24], and brain and breast cancer treatments in rats [25,26], to vascular stents [15,27,28]. Other studies revealing the use of BC as artificial skin, artificial blood vessels and microvessels, wound dressing of second- or third-degree burn ulcers, and dental implants [23] were also reported.
Natural polymers and hydrogels (such as BC) possess many properties that make them attractive for challenging reconstruction problems, such as neural tissue applications for example [29]. Benefiting from high biocompatibility and bioadhesivity on living tissues BC has been widely used as a scaffold for cellular growth and tissue engineering [16,24,30,31]. The refined natural 3-D nanofibers of BC networks are distinct from the usual scaffolding due to the similarity of its shape to the collagen nanofibrils in natural tissue, such as the umbilical cord [30] and basement membrane in the cornea [32]. In addition, some researchers observed that endothelial, smooth muscle cells, and chondrocytes show good adhesion to BC [13,33].
To emphasize the relevance of the subject, over the past decade, several BC-based materials have been designed for a variety of biomedical applications, which has a marked notable increase in the number of scientific reports since 2000. The reader is advised to consult the cited review articles that highlight the potential applications of BC as a biomaterial [10,34,35,36,37,38,39,40,41] and recently in dentistry [42].

3. A Brief Overview of BC Uses in Biomedicine Applications

As briefly shown, bacterial cellulose presents excellent properties that makes it a wonderful renewable polymer synthesized from the bacterium Komagataeibacter xylinus or related bacteria, which has attracted considerable interest and applications in several biomedical and tissue engineering fields. Although BC’s advantages and properties are not new, this review showed that BC can be explored as an innovative biomaterial for dental and oral applications.
Probably, it is possible to observe an increasing degree of complexity in BC dental applications. Due to some BC properties, such as transparency, elasticity, durability, acting as a physical barrier against bacteria, hemostatic, easy handling, low cost, accelerated healing process, and pain relief, firstly, pure BC membranes were directly applied to regenerate the oral mucosa and periodontal tissue. Other properties, such as easy moldability and natural 3-D well-arranged nanofibers, have inspired new BC-based nanocomposites to perform dental endodontic treatment, surgical, reinforcement biomaterial, scaffolds, and nanocomposites aimed at bone mineralization, for example.
There is huge potential to be explored, mainly related to tissues that have limitations or difficulties in the healing process, such as nerves, cartilage, and bone. Although some BC-based materials are focused on bone tissue, bone regeneration is a complex physiological process that needs time for its formation. Bacterial cellulose is a good candidate for bone repair as it presents versatility for the preparation of nanocomposites by a biomimetic approach. Aligned to the current trends and taking advantage of biotechnology and the high-value-added functional materials, many other novel features can be expected in the near future, especially those related to 3-D nanomaterials and scaffold design. Thus, the material properties can be enhanced when associated with a biomaterial because in addition to promoting adhesion and proliferation of target cell lines, they can still act as potential candidates in other applications associated with bone regeneration, like alveolar bone regeneration and fixation, cleft palate, and dental implants. 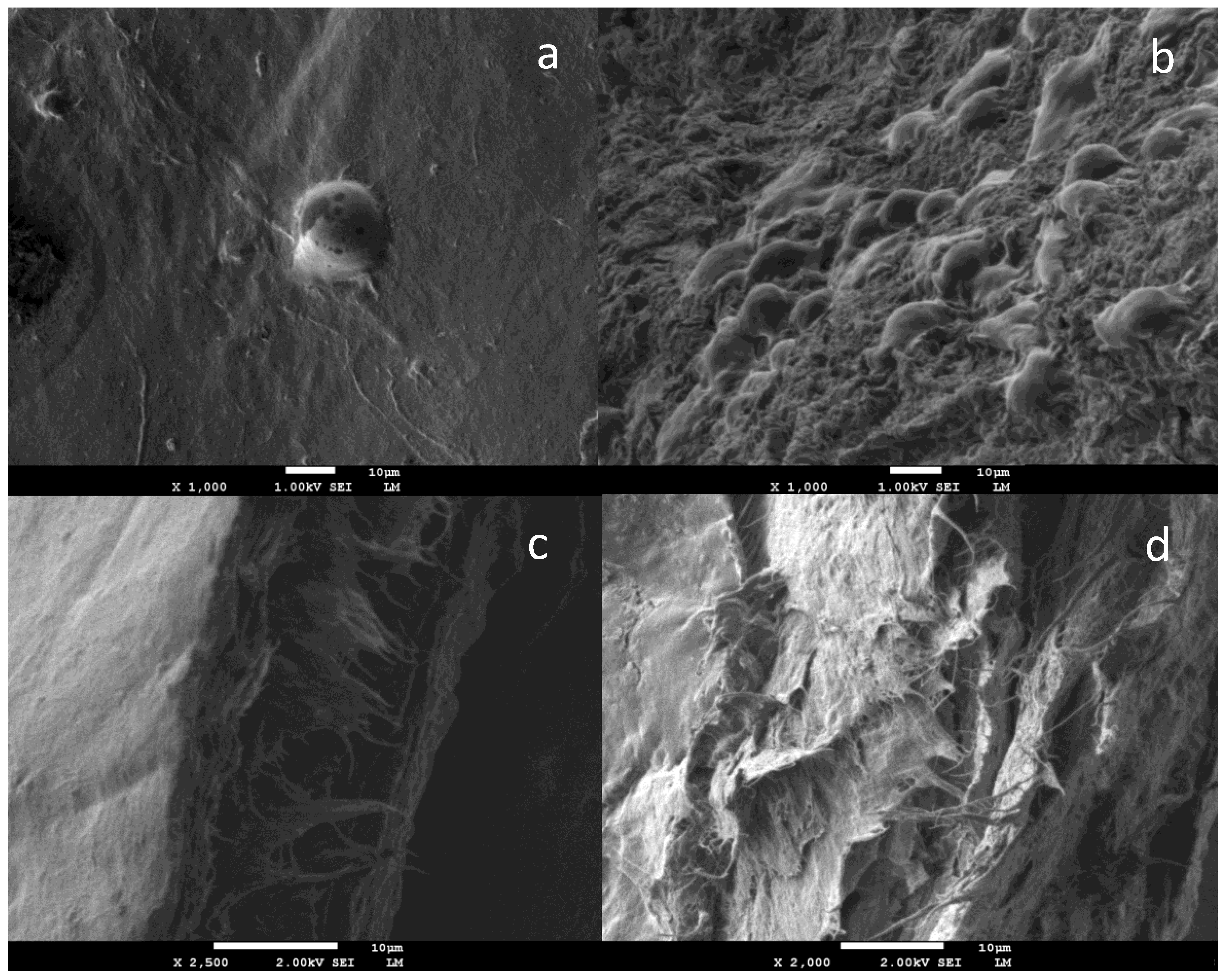 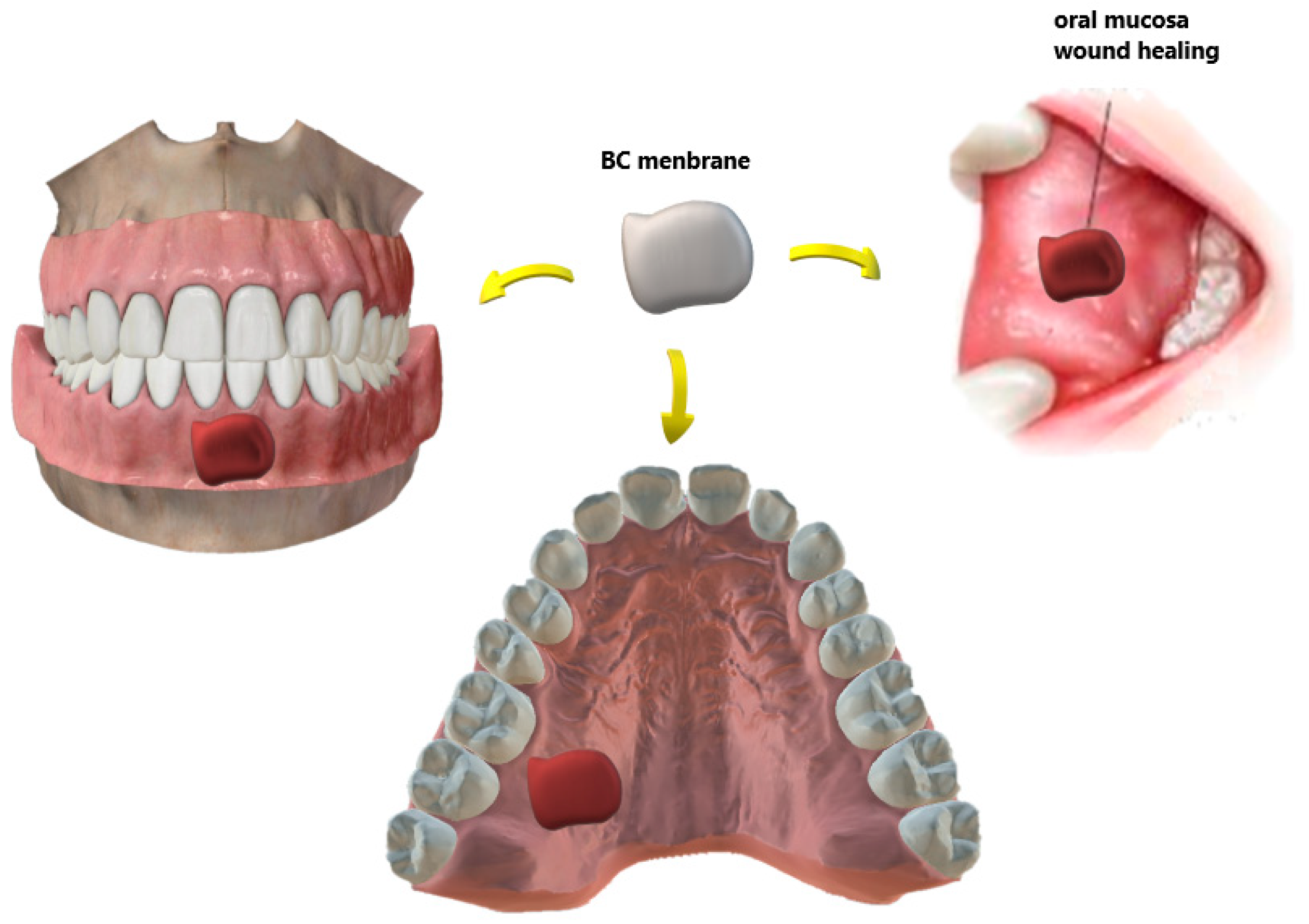 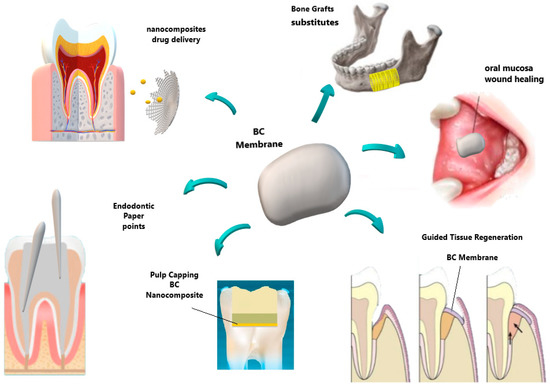 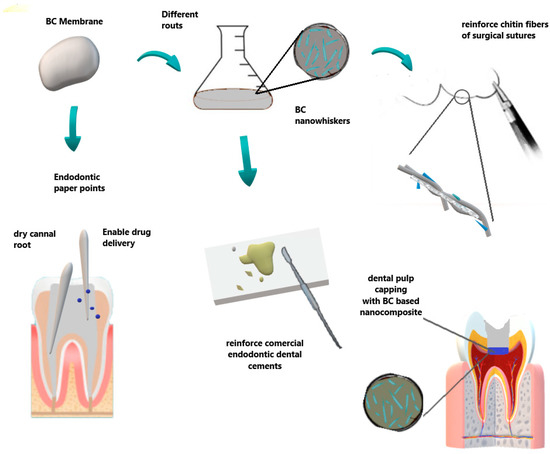 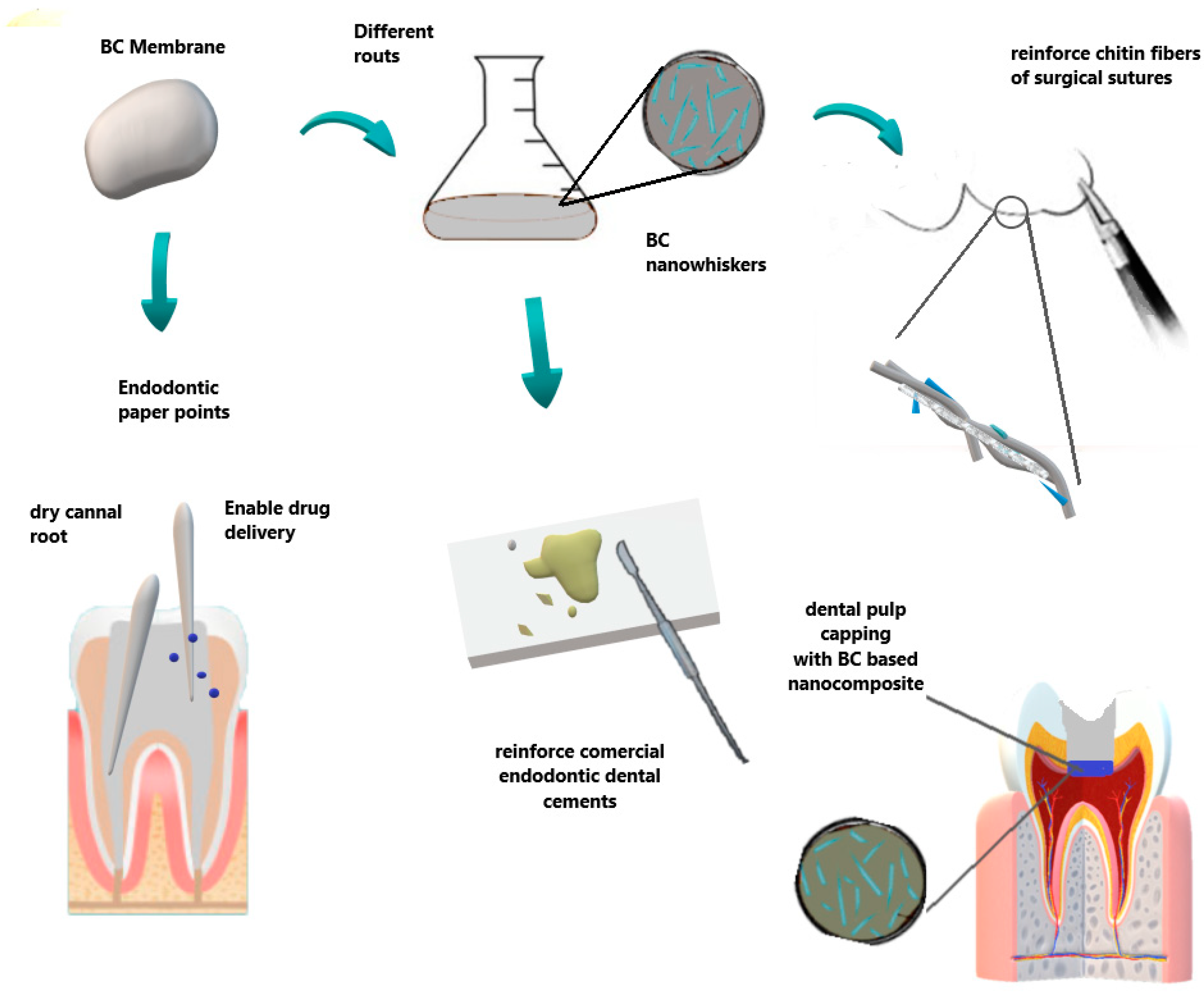