Photoprotection and Skin Pigmentation: Melanin-Related Molecules and Some Other New Agents Obtained from Natural Sources

In this review, we describe a simple and general procedure to accomplish selective photochemical reaction sequences for two chromophores that are responsive to similar light frequencies. The essence of the method is based on the exploitation of differences in the molar absorptivity at certain wavelengths of the photosensitive groups, which is enhanced by utilizing light-absorbing auxiliary filter molecules, or “sunscreens”. Thus, the filter molecule hinders the reaction pathway of the least absorbing molecule or group, allowing for the selective reaction of the other. The method was applied to various photochemical reactions, from photolabile protecting group removal to catalytic photoinduced olefin metathesis in different wavelengths and using different sunscreen molecules. Additionally, the sunscreens were shown to be effective also when applied externally to the reaction mixture, avoiding any potential chemical interactions between sunscreen and substrates and circumventing the need to remove the light-filtering molecules from the reaction mixture, adding to the simplicity and generality of the method.
Keywords: photochemistry; sunscreen; chromatic selectivity; photolabile protecting groups; photoinduced olefin metathesis photochemistry; sunscreen; chromatic selectivity; photolabile protecting groups; photoinduced olefin metathesis

The use of light to carry out organic transformations has resurged dramatically in recent years [1]. Naturally, light is considered a ‘green’ and clean source of energy that can be easily applied and manipulated. In this decade, we witnessed the rebirth of “classic” photochemical reactions [2,3,4] along with the development of novel organic and organometallic photocatalysts for a variety of transformations [5,6,7,8,9,10]. Light is also used to make new materials, for example, in additive manufacturing and stereolithographic processes—where light is applied with excellent spatial resolution and precision [11,12]. Additionally, the development of continuous flow techniques for photochemistry has made the execution of large-scale light-induced processes possible, overcoming the light transmittance issues associated with large-scale photochemical reactions [13,14,15,16,17]. However, when more than one photosensitive group is present in a reaction mixture, the selective triggering of each chromophore may be difficult to accomplish, especially in cases where the absorption spectra of the photosensitive moieties overlap [18]. The photosensitivity of a chromophore at a certain wavelength strongly depends on two factors: its molar absorption coefficient and the quantum yield of the photochemical reaction. In recent years, several chromatic orthogonal systems where two photosensitive moieties may be reacted in a commutative fashion with different colors of light have been designed [19]. Notable works in this field were reported by Bochet et al. [20,21], for example by harnessing kinetic isotope effects to achieve chromatic orthogonality between two types of 2-nitrobenzyl based photolabile protecting groups (PPGs) [22] and even demonstrating the chromatic orthogonal total synthesis of a natural product [23]. Additional significant advancements in the field were reported by Barner-Kowollik et al., who developed a series of chromatic orthogonal photocyclization reactions with applications in polymer chemistry and material science [24,25,26,27,28]. In addition, several chromatic selective systems where two chromophores may be reacted sequentially have been developed with great efficiency [29,30,31,32]. In this focus review, we describe a different approach that was developed in our laboratory to achieve selectivity between two photosensitive groups or photochemical reactions that occur at similar wavelengths. The method exploits differences in the molar absorption coefficient between two chromophores with the aid of an external molecule that acts as a light filter, or as we call it, a “sunscreen”. The filter molecule deters one of the photochemical reactions, prompting a selective sequence. The generality of this method was studied with different types of reactions ranging from PPG removal to light-induced catalytic olefin metathesis reactions and demonstrated with several wavelengths and different filter molecules.

2. Development of the Method

To summarize, in this short review, a new method geared toward achieving selectivity in photochemical reactions using simple and available molecular filters was presented. The generality of the technique was demonstrated with two different sunscreen molecules: phenanthrene for reactions that are induced by UV-C light and 1-pyrenecarboxaldehyde for photochemistry with UV-A light. This methodology was applied in the selective PPG removal of the more absorbing 2-nitrobenzyl group over supersilyl ethers with UV-C light. Meanwhile, with UV-A light, 2-nitrobenzyl could be now protected with 1-pyrenecarboxaldehyde dye to allow a catalytic CM reaction in the all-photochemical synthesis of coumarin derivatives and also to increase the efficiency of a metathesis catalyst with a 2-nitrobenzyl based chromatic orthogonal self-destruction switch. Phenanthrene was also used to modulate a photochemically divergent reaction and enabled the selective photochemical synthesis of valuable butenolide and levulinate scaffolds from simple starting materials.

This research was funded by the Israel Science Foundation, Grant Number: 506/18. 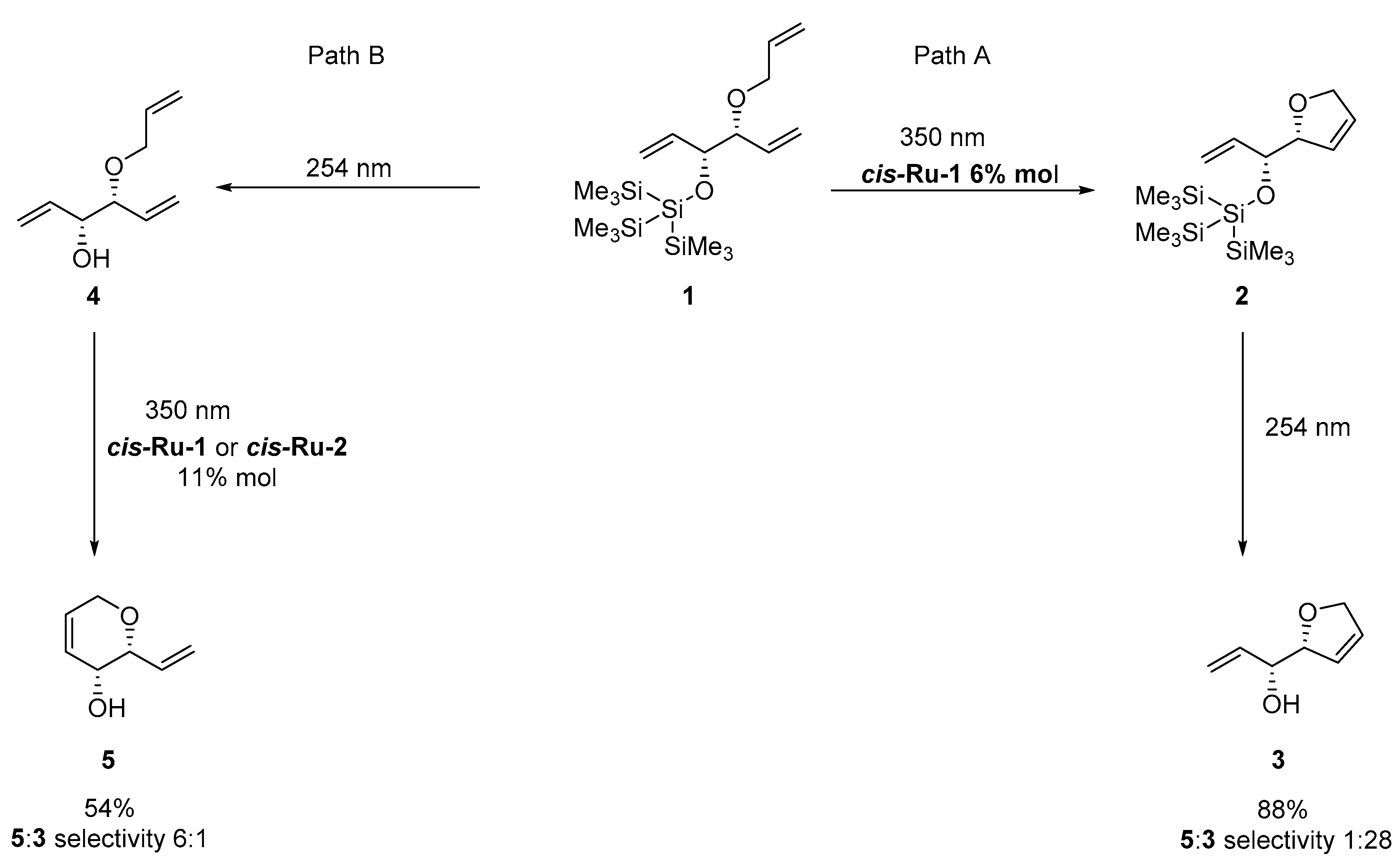 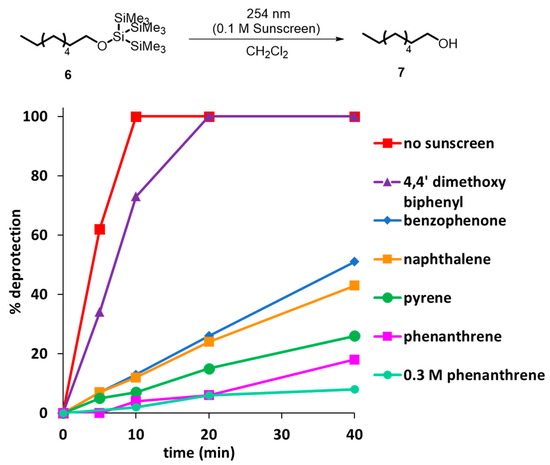 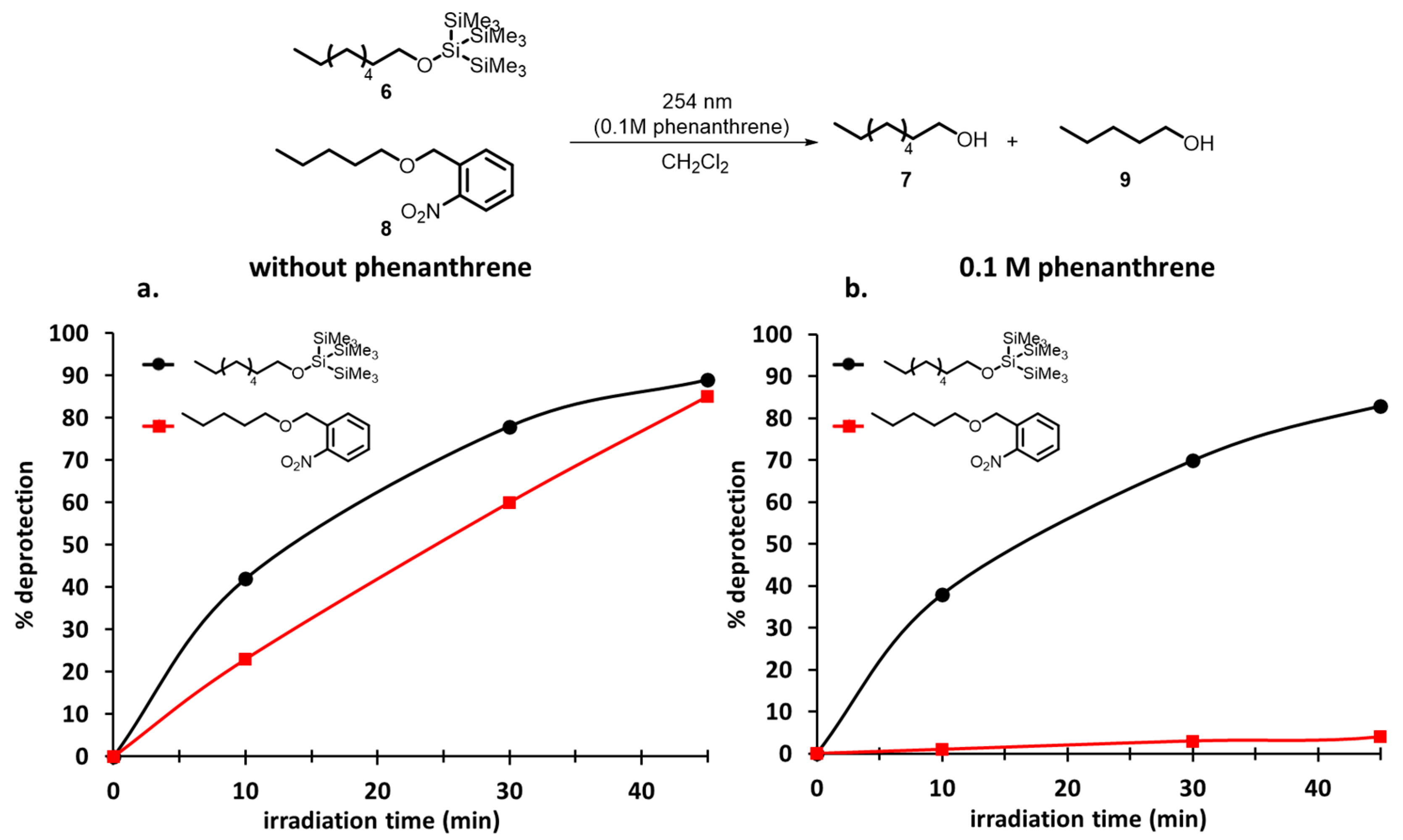 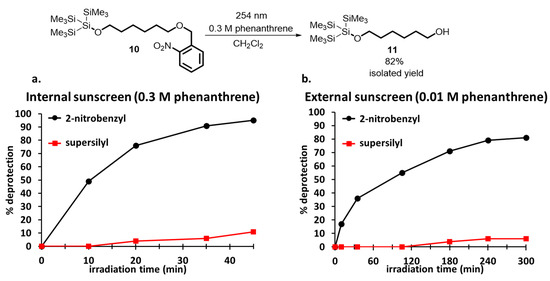 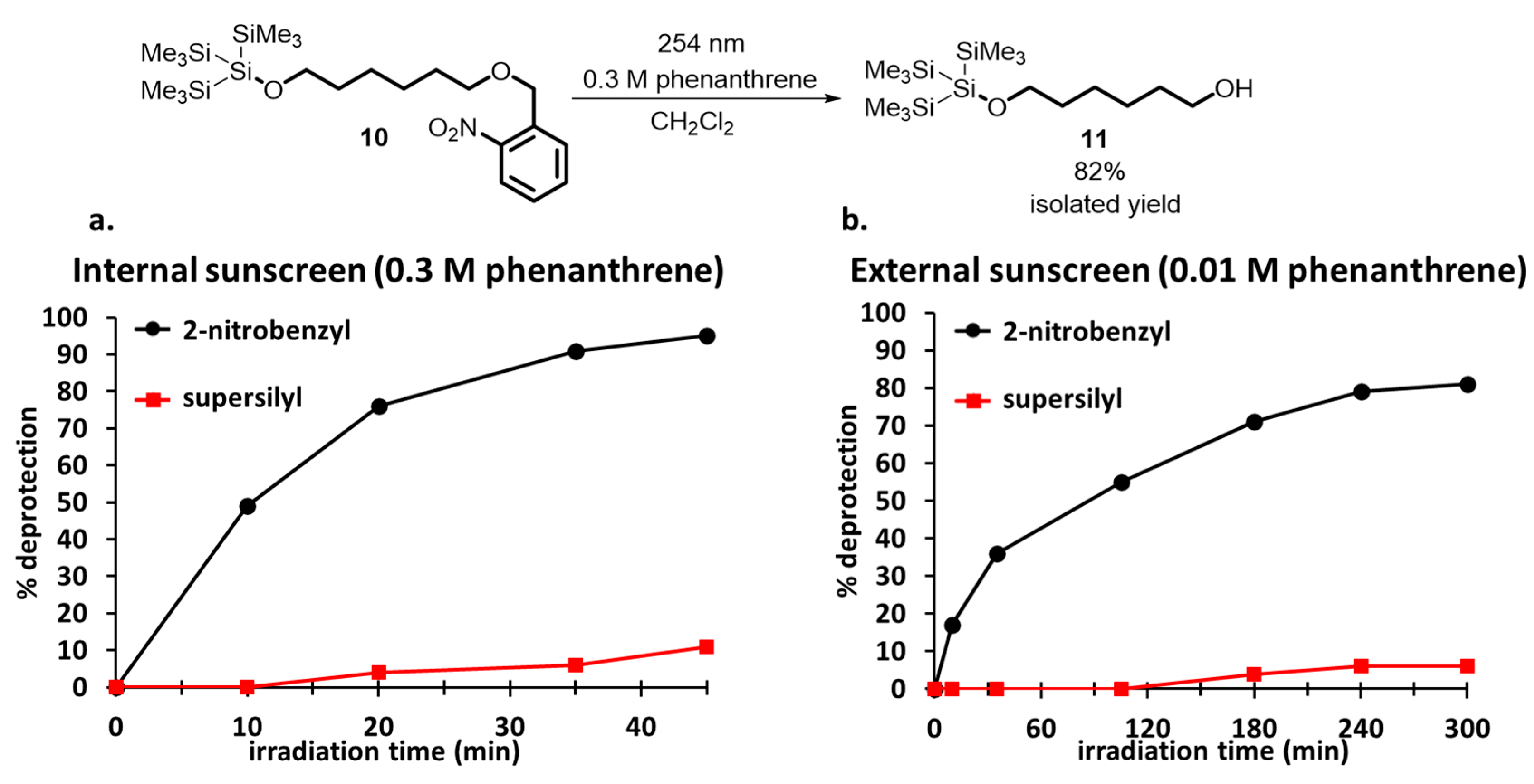 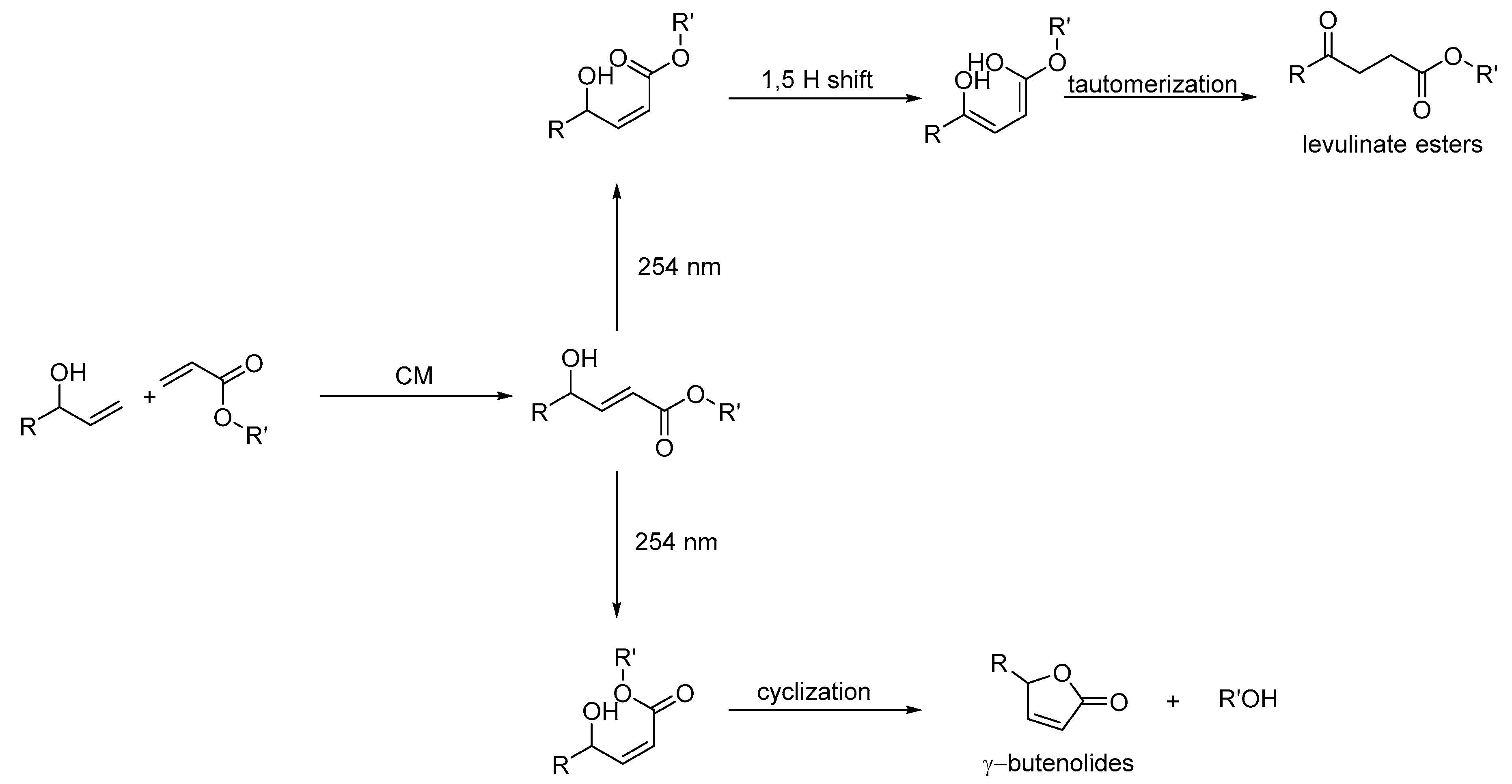 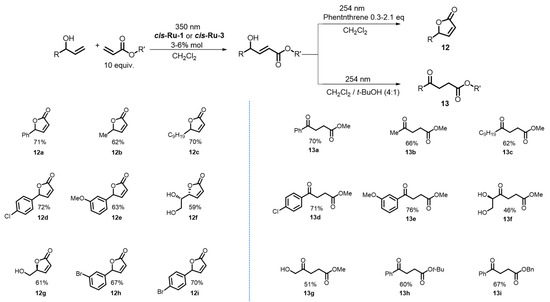 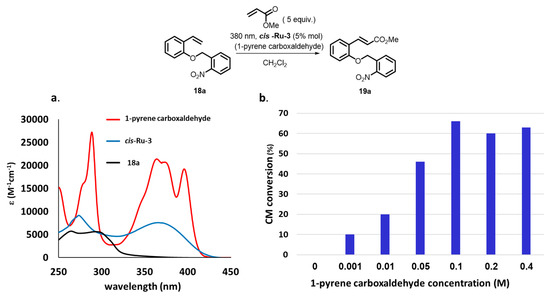 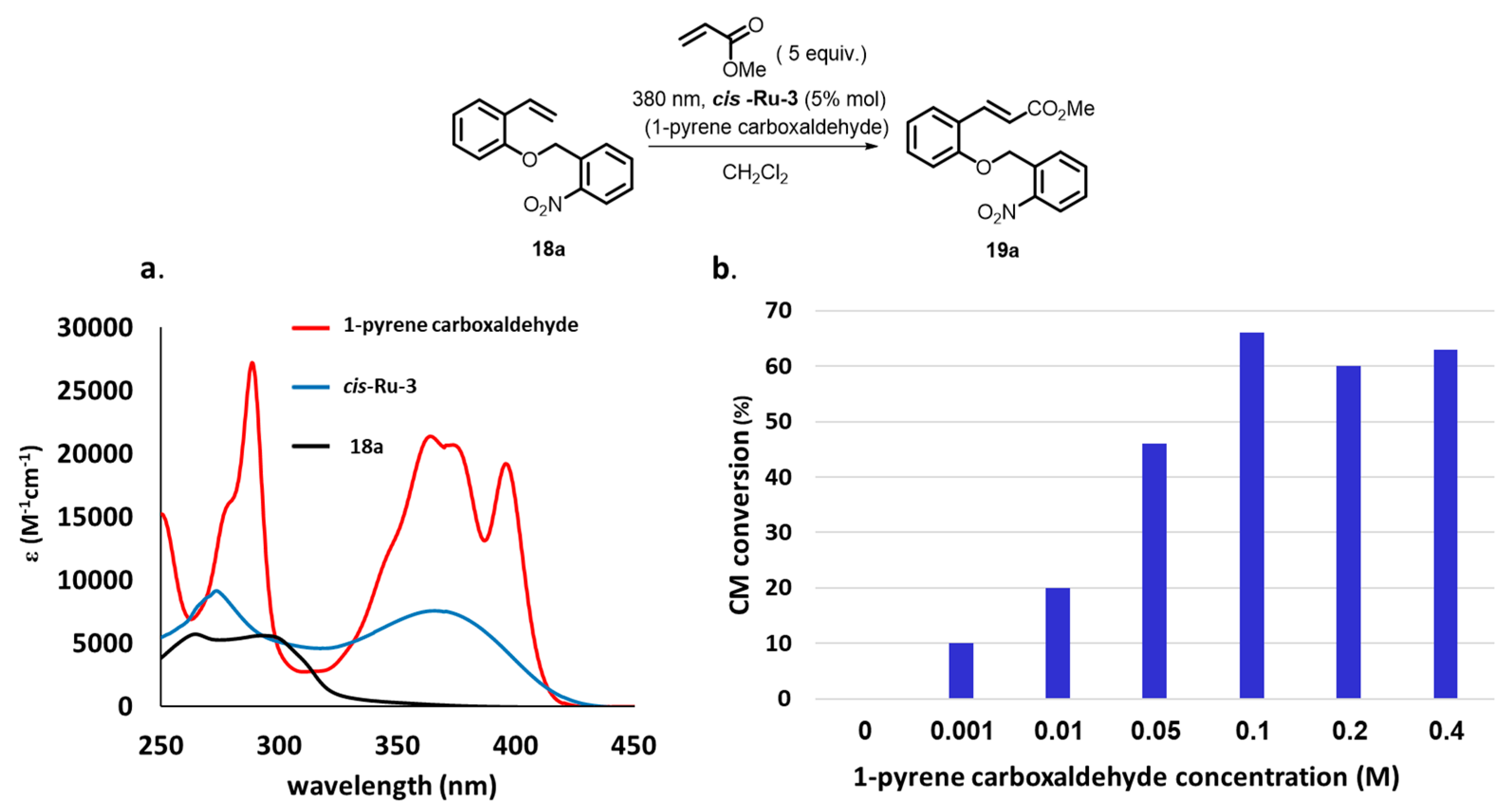 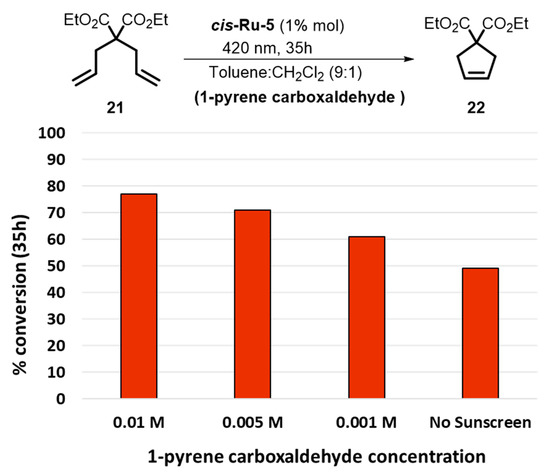 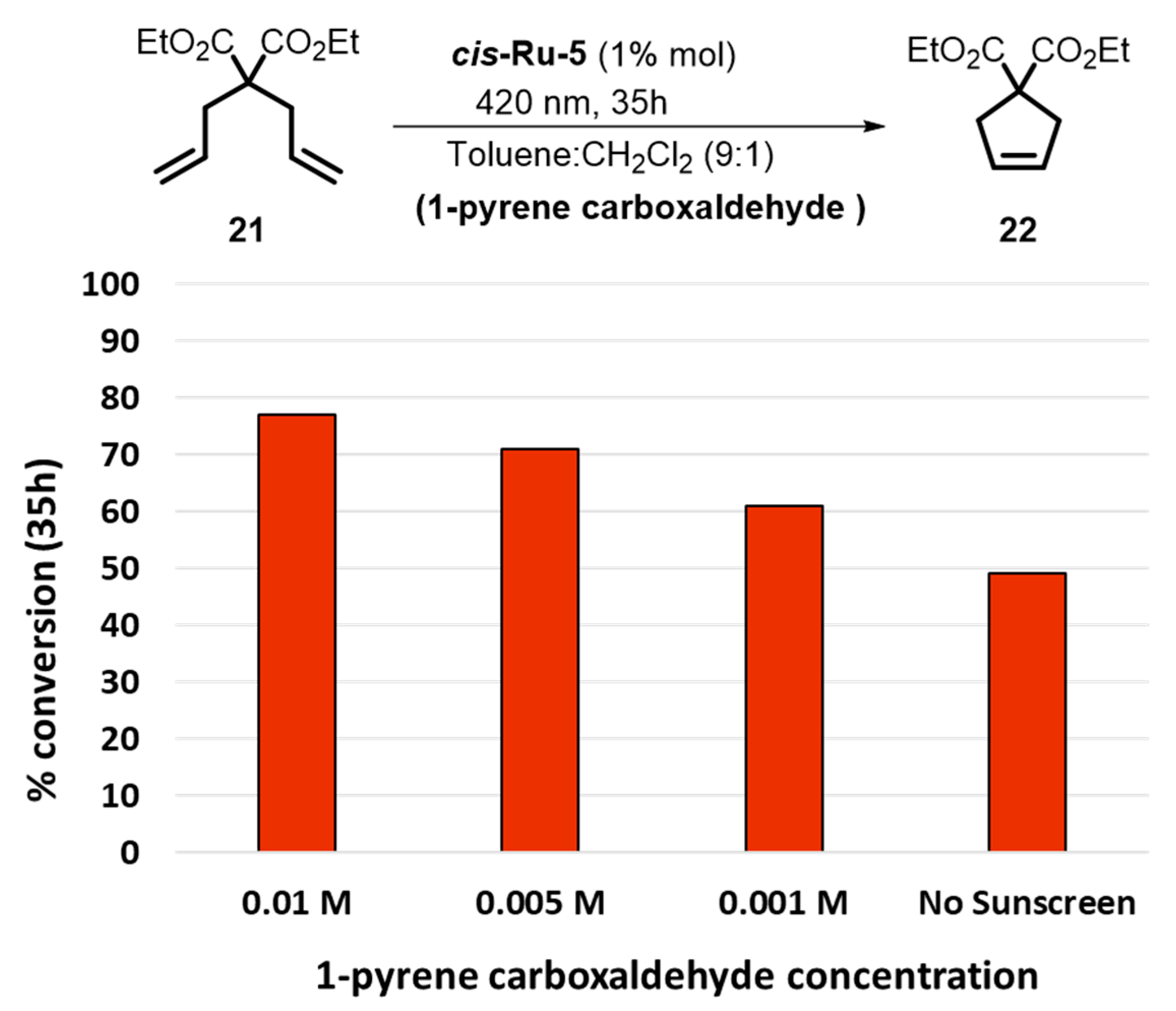