A series of new hexasubstituted cyclotriphosphazene compounds (4a–j) consisting of two Schiff base linking units and different terminal substituents was successfully synthesized and characterized. The structures of these compounds were confirmed using Fourier Transform Infra-Red (FTIR), Nuclear Magnetic Resonance (NMR), and CHN elemental analysis. Polarized optical microscopy (POM) was used to determine their liquid-crystal behavior, which was then further confirmed using differential scanning calorimetry (DSC). Compounds 4a–i with heptyl, nonyl, decyl, dodecyl, tetradecyl, hydroxy, 4-carboxyphenyl, chloro, and nitro terminal ends, respectively, showed the liquid-crystal properties, whereas compound 4j with the amino group was found to be non-mesogenic. The attachment of an electron-donating group in 4j eventually give a non-mesogenic product. The study of the fire-retardant properties of these compounds was done using the limiting oxygen index (LOI). In this study, polyester resin (PE) was used as a matrix for moulding, and the LOI value of pure PE was 22.53%. The LOI value increased to 24.71% when PE was incorporated with 1 wt.% of hexachlorocyclotriphosphazene (HCCP), thus indicating that HCCP has a good fire-retardant properties. The result showed that all the compounds have good agreement in their LOI values. Compound 4i with a nitro terminal group gave the highest LOI value of 28.37%. View Full-Text
Keywords: schiff base; cyclotriphosphazene; liquid-crystal; fire-retardant; non-mesogenic schiff base; cyclotriphosphazene; liquid-crystal; fire-retardant; non-mesogenic
►▼ Show Figures 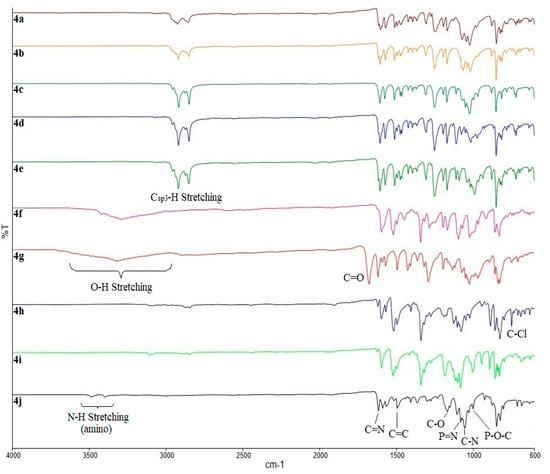