Kava extract, an aqueous rhizome emulsion of the plant Piper methysticum, has been used for centuries by Pacific Islanders as a ceremonial beverage, and has been sold as an anxiolytic agent for some decades. Kavalactones are a major constituent of kava extract. In a previous investigation, we had identified three kavalactones that inhibit larval development of Haemonchus contortus in an in vitro-bioassay. In the present study, we synthesized two kavalactones, desmethoxyyangonin and yangonin, as well as 17 analogues thereof, and evaluated their anthelmintic activities using the same bioassay as employed previously. Structure activity relationship (SAR) studies showed that a 4-substituent on the pendant aryl ring was required for activity. In particular, compounds with 4-trifluoromethoxy, 4-difluoromethoxy, 4-phenoxy, and 4-N-morpholine substitutions had anthelmintic activities (IC50 values in the range of 1.9 to 8.9 µM) that were greater than either of the parent natural products—desmethoxyyangonin (IC50 of 37.1 µM) and yangonin (IC50 of 15.0 µM). The synthesized analogues did not exhibit toxicity on HepG2 human hepatoma cells in vitro at concentrations of up to 40 µM. These findings confirm the previously-identified kavalactone scaffold as a promising chemotype for new anthelmintics and provide a basis for a detailed SAR investigation focused on developing a novel anthelmintic agent. View Full-Text
Keywords: kavalactone; synthetic analogues; anthelmintic; in vitro-activity; Haemonchus contortus kavalactone; synthetic analogues; anthelmintic; in vitro-activity; Haemonchus contortus
►▼ Show Figures 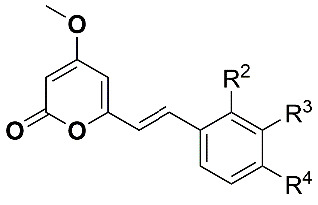