A major structural retroviral protein, capsid protein (CA), is able to oligomerize into two different hexameric lattices, which makes this protein a key component for both the early and late stages of HIV-1 replication. During the late stage, the CA protein, as part of the Gag polyprotein precursor, facilitates protein–protein interactions that lead to the assembly of immature particles. Following protease activation and Gag polyprotein processing, CA also drives the assembly of the mature viral core. In the early stage of infection, the role of the CA protein is distinct. It controls the disassembly of the mature CA hexameric lattice i.e., uncoating, which is critical for the reverse transcription of the single-stranded RNA genome into double stranded DNA. These properties make CA a very attractive target for small molecule functioning as inhibitors of HIV-1 particle assembly and/or disassembly. Of these, inhibitors containing the PF74 scaffold have been extensively studied. In this study, we reported a series of modifications of the PF74 molecule and its characterization through a combination of biochemical and structural approaches. Our data supported the hypothesis that PF74 stabilizes the mature HIV-1 CA hexameric lattice. We identified derivatives with a higher in vitro stabilization activity in comparison to the original PF74 molecule. View Full-Text
Keywords: HIV-1 CA inhibitor; PF74 derivatives; uncoating; disassembly HIV-1 CA inhibitor; PF74 derivatives; uncoating; disassembly
►▼ Show Figures 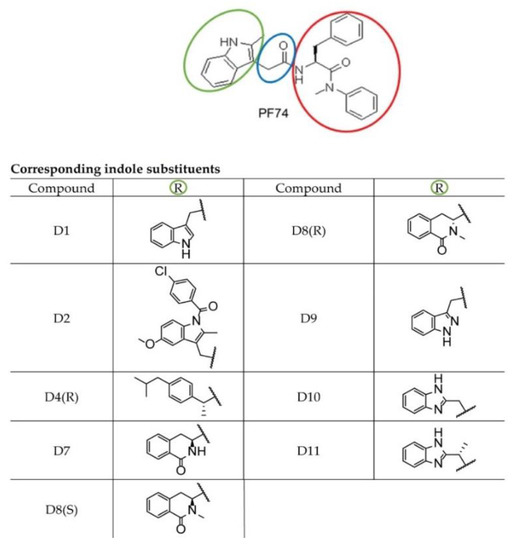