Catechin in Human Health and Disease

Effect of (−)-Epigallocatechin Gallate to Staphylococcal Enterotoxin A on Toxin Activity

Staphylococcal enterotoxin A (SEA) functions both as superantigens that stimulate non-specific T cell proliferation as well as potent gastrointestinal toxins. We previously reported that (−)-epigallocatechin gallate (EGCG) binds to SEA. Therefore, the ability of EGCG to inhibit SEA toxin activity was examined. As a result, EGCG significantly decreased SEA-induced expression and production of interferon gamma (IFN-γ). In addition, EGCG inhibited SEA-induced spleen cell proliferation. To investigate the role of the galloyl group in EGCG on SEA cytotoxicity in more detail, the effect of the binding of a hydroxyl group at position 3 of the galloyl group in EGCG to SEA on SEA cytotoxicity was examined using two methylated EGCG. SEA cytotoxicity was significantly controlled in both (−)-3′′-Me-EGCG and (−)-4′′-Me-EGCG. These results suggest that EGCG inhibits toxic activity via direct interaction with SEA or without any interaction with SEA. The binding affinity between SEA and EGCG under in vivo conditions was examined using a model solution. Although after treatment under acidic and alkaline conditions, the presence of protein and the digestive tract model solution, EGCG still interacted with SEA. Our studies are the first to demonstrate the effect of the binding of EGCG to SEA on toxin activity. View Full-Text
Keywords: catechin; (−)-epigallocatechin gallate; staphylococcal enterotoxin A; binding catechin; (−)-epigallocatechin gallate; staphylococcal enterotoxin A; binding
►▼ Show Figures 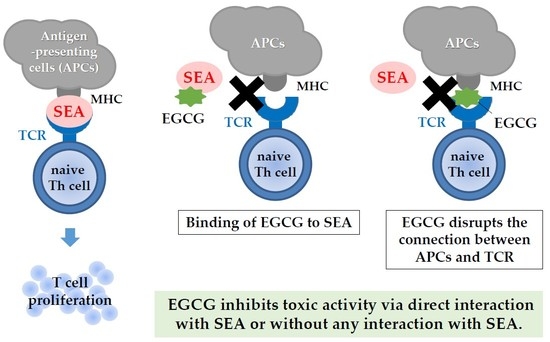