Essential Oil Phytocomplex Activity, a Review with a Focus on Multivariate Analysis for a Network Pharmacology-Informed Phytogenomic Approach
Next Article in Special Issue

Gentiana lutea is a bitter herb that is traditionally used to improve gastric disorders. Recently, we have shown that Gentiana lutea extract (GE) also modulates the lipid metabolism of human keratinocytes in vitro and in vivo. In the present study, we investigated the role of GE on ceramide synthesis in human primary keratinocytes (HPKs) and psoriasis-like keratinocytes. We could demonstrate that GE increased the concentrations of glucosylceramides and the ceramide AS/AdS subclass without affecting the overall ceramide content in HPKs. The expression of ceramide synthase 3 (CERS3) and elongases (ELOVL1 and 4) was reduced in psoriasis lesions compared to healthy skin. Psoriasis-like HPKs, generated by stimulating HPKs with cytokines that are involved in the pathogenesis of psoriasis (IL-17, TNF-α, IL-22 and IFN-γ) showed increased levels of IL-6, IL-8 and increased expression of DEFB4A, as well as decreased expression of ELOVL4. The treatment with GE partly rescued the reduced expression of ELOVL4 in psoriasis-like HPKs and augmented CERS3 expression. This study has shown that GE modulates ceramide synthesis in keratinocytes. Therefore, GE might be a novel topical treatment for skin diseases with an altered lipid composition such as psoriasis. View Full-Text
Keywords: ceramides; skin; Gentiana lutea; CerS; ELOVL ceramides; skin; Gentiana lutea; CerS; ELOVL
►▼ Show Figures 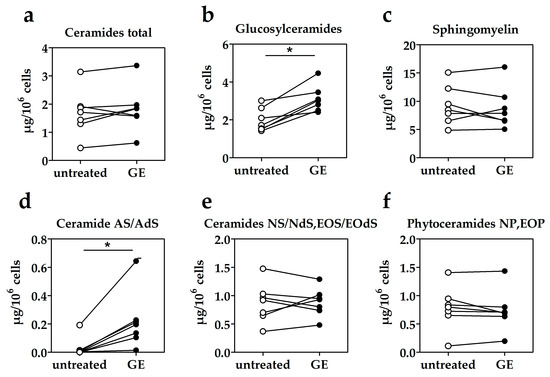