Development and Validation of Liquid Chromatography-Tandem Mass Spectrometry Method for Pharmacokinetic Evaluation of 7β-(3-Ethyl-cis-crotonoyloxy)-1α-(2-methylbutyryloxy)-3,14-dehydro-Z-notonipetranon in Rats
Next Article in Special Issue

:
This work presents an investigation to model chemical bonding in various dimers based on the atomic fragment approach. The atomic fragment approach is an ab-initio, parameter-free implementation of orbital-free density functional theory which is based on the bifunctional formalism, i.e., it uses both the density and the Pauli potential as two separate variables. While providing the exact Kohn-Sham Pauli kinetic energy when the orbital-based Kohn-Sham data are used, the bifunctional formalism allows for approximations of the functional derivative which are orbital-free. In its first implementation, the atomic fragment approach uses atoms in their ground state to model the Pauli potential. Here, it is tested how artificial closed-shell fragments with non-integer electron occupation perform regarding the prediction of bond lengths of diatomics. Such fragments can sometimes mimic the electronic structure of a molecule better than groundstate fragments. It is found that bond lengths may indeed be considerably improved in some of the tested diatomics, in accord with predictions based on the electronic structure.
Keywords:
orbital-free density functional theory; bifunctional; Pauli potential; Pauli kinetic energy; chemical bonding; real space; atomic fragment approach

Orbital-free density functional theory (OF-DFT) promises a reliable physical description of matter on the basis of quantum mechanics [1], while staying at a moderate level of computational costs [2,3,4,5,6,7]. The enormous computational speed-up is due to the fact that, in OF-DFT a single Euler equation directly determines the electron density of the system. This is in contrast to the well-known, orbital-based Kohn-Sham (KS) method [1,8], where a system of N non-interacting electrons has to be solved. However, OF-DFT requires finding sufficiently accurate approximations for the kinetic energy, being a considerable challenge for theoretical physicists and chemists [9].
In the early days, density functional approximations were mostly based on conventional gradient expansions [10,11,12,13,14,15,16,17,18,19,20,21]. Unfortunately, those expansions do not form a convergent series [22], and thus, this route was abandoned. Later those attempts were extended to generalized-gradient-approximation techniques, where the explicit functional approximation is motivated by conjoint arguments [23,24] or the fulfillment of additional constraints [9,25,26]. Besides GGA-type functionals, kinetic energy expansions based on moment densities were studied [27], as well as functionals based on response theory [28,29], parameterized power series expansions [30,31,32], and information-theory motivated expressions [33,34,35]. Following the ideas of March, it would be sufficient to model the Pauli kinetic energy [36], as it constitutes the only unknown functional part of the kinetic energy, while the remaining part, the so-called von Weizsäcker kinetic energy [12] is known analytically in terms of the electron density. Consequently, the Pauli kinetic energy and the corresponding Pauli potential [36,37,38,39,40,41,42,43,44,45,46] have been subject for intense studies over decades.
Following the ideas of Hohenberg and Kohn [1], one usually aims to approximate the energy functional as an integral over a kernel function that analytically depends on the electron density and possibly other ingredients. Another route for the design of energy expressions is based on the so-called non-analytical functionals [47,48,49,50,51]. This approach exploits the homogeneous scaling behavior of a given density functional [52], while suppressing its implicit density dependence in the functional derivative. Consequently, this approach deals with two separate variables, namely the potential and the electron density. The reformulation is exact for the exact density-potential pair, however, it allows for further approximations of the formal functional derivative. This leads to a systematic route of functional approximations, that belong to the group of ab-initio, parameter-free implementations of orbital-free density functional theory.
This work further exploits the proposed formalism. While the first order atomic fragment approach involves atomic fragments in their groundstate, the recent work investigates the influence of the fragment Pauli potential on the equilibrium bond lengths using groundstate and closed-shell atomic fragments. Closed-shell atoms are closer to the real space fragment within a molecule and as such, the corresponding fragment Pauli potential mimics to some extend the relaxation of the molecular Pauli potential during the process of molecular formation. It is shown that this relaxation presents an eminent part for an orbital-free description of chemical bonding.

Energy minimization was performed by our own code using atom-centered, squared, real-type nodeless Slater functions (1S, 2S) to construct the electron density: where the occupations correspond to the total number of electrons in the corresponding shell. Nodeless spherical Slater functions are given by [64,65]: with: and , where Z is the nuclear charge, is an effective quantum number, and s is the so-called shielding constant [65]. Shell concept, occupation and shielding constants are determined according to the Slater rules [65], e.g., second row elements have one shell in the core region and one single shell in the valence region (grouping s- and p-electrons together). However, the atomic valence electron density was restricted to closed-shell states in order to model the closed-shell state for the molecule. Atomic closed-shell states were obtained by equally filling up alpha and beta electrons until the total number of electrons was reached. Consequently, closed-shell atoms had fractional occupations for an uneven number of total electrons. The Slater exponents for the valence density, here in all cases, were projected to an optimization procedure in order to minimize the total energy. Bear in mind that optimization of exponents with respect to the energy leads to a system of non-linear equations. Therefore, the minimization procedure had to be performed iteratively.
The current approach allows for the relaxation of the density by adjusting the exponents . The Pauli potential, however, obtained by superposition of atomic closed-shell atomic Pauli potentials or groundstate atoms, respectively, was kept fixed (at a given internuclear distance) during the optimization process. Those atomic Pauli potentials were taken from an LDA (Xonly) KS calculation performed with ADF [54] using atomic closed-shell configurations and the QZ4P basis sets.

This work presents an ab-initio, parameter-free, orbital-free implementation of density functional theory. In the present approach the functional value of the Pauli kinetic energy is evaluated from the density-potential pair using the bifunctional formalism. The bifunctional formalism allows to treat the functional derivative, the potential, and the electron density as two separate variables, while yielding exactly the Kohn-Sham Pauli kinetic energy when the corresponding orbital-based Kohn-Sham density and Pauli potential are inserted. However, the bifunctional approach allows for further approximations of the formal functional derivative, e.g., the atomic fragment approach. Within the atomic fragment approach, the molecular Pauli potential is approximated by the superposition of atomic Pauli potentials. While in previous attempts only atomic groundstate fragments have been employed, this work exploits the influence of the atomic fragment states on the ability to model chemical bonding. Thus, in the present work the molecular Pauli potential is approximated by the superposition of closed-shell and groundstate atomic Pauli potentials, respectively, and the electron density is determined by energy minimization. The resulting energy curves were evaluated for various dimers in order to determine the respective equilibrium bond lengths. It was shown that the corresponding bond distances improve for most diatomics if closed-shell fragments are used instead of groundstate fragments, with considerable improvements for some of the considered molecules and with a MAPE of only 6%.
This improvement is due to the incorporation of the effects causes by the electronic reorganization in the Pauli potential due to the process of molecular binding. Precisely, due to the electronic promotion and electron sharing in the molecule, the respective atomic fragments resembles more closed-shell atoms than atoms in their groundstate (first order approximation). Consequently, closed-shell fragments yield a significantly better description of chemical bonding for some of the investigated diatomics.

The author is thankful for funding in terms of a habilitation fellowship from the Graduate Academy TU Dresden.

The authors declare no conflict of interest. The funders had no role in the design of the study; in the collection, analyses, or interpretation of data; in the writing of the manuscript, or in the decision to publish the result. 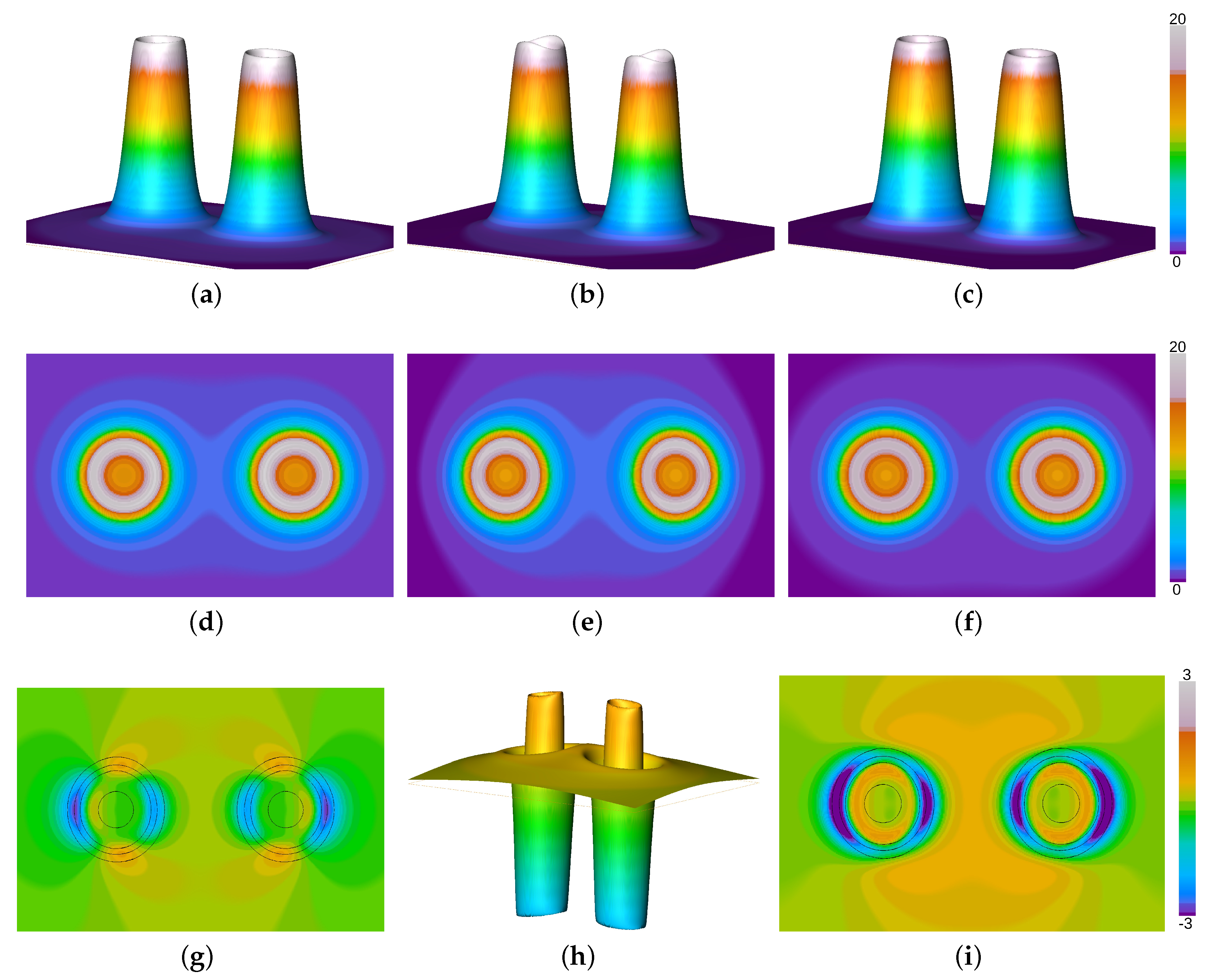