At the conical boundary conditions the axial-bipolar configuration is the most frequently realised within the droplets of LN-396 nematic [12]. This structure is characterised by two surface point defects (boojums) located at the diametrically opposite poles of the droplet and the surface circular defect at the droplet’s equator (Figure 1). The specific feature of the axial-bipolar configuration is a random orientation of the bipolar axis relative to the short axis of oblate droplets (the normal to the composite film plane) formed in the sample. For this reason, the various optical textures of nematic droplets with the axial-bipolar structure are observed [47,48].
The axisymmetric twisted axial-bipolar configuration is formed in the cholesteric droplets at under conical surface anchoring (Figure 2 and Figure 3). The director twist angle on the droplet diameter in the equator plane (the plane of the circular defect) depends on and can be measured by the method of rotating polariser and analyser [49]. For instance, the twist angle is 130 for droplets with , 160 at , and 180 at . Like in nematic droplets, the symmetry axis of the twisted axial-bipolar droplets is oriented differently relative to the sample plane (Figure 2 and Figure 3). Figure 3b shows the droplet in which the circular defect is situated in the film plane and Figure 3c,d demonstrate the droplet with the symmetry axis tilted to the film plane by an angle approximately 50. In the last case, the circular surface defect and two boojums located above and below the central cross-section of droplet can be clearly observed by changing a position of the microscope focus [47].

The layer-like structure is formed in the cholesteric droplets under both tangential and homeotropic boundary conditions at sufficiently high [38,39]. In CLC droplets under conical boundary conditions the layer-like structure is observed at (Figure 4). The sharp isoclinic lines are revealed when the cholesteric layers are orthogonal to the film plane in the central cross-section of CLC droplet (Figure 4). These lines correspond to the areas in the cross-section of droplet where the director is oriented parallel to the microscope axis [38]. The layer-like structure is characterised by minor deformation of cholesteric layers (isoclinic lines are slightly curved), and the number N of director turns on the droplet diameter is less than (the effect of cholesteric helix untwisting [50]). In this case, the discrepancy between N and decreases as the droplet’s diameter increases. The values of N and for different sizes of CLC droplets are presented in Table 1. The droplets with characteristic optical textures at N close to the integer value were chosen for measurement [50]. It is seen that is approximately twice the value of N for the droplet of m, and the ratio of to the corresponding (m) is 1.49. Thus, as the droplet’s diameter increases the ratio decreases more slowly than in the droplets under the strong homeotropic anchoring [50]. Apparently, this effect is due to quite weak polar anchoring strength of LC with polymer J/m [47]. This polar surface anchoring corresponds to a surface extrapolation length (K is the Frank elastic constant) of the order of several microns [10,51]. Accordingly, the balance between the surface and elastic Frank energy should be very sensitive to the elastic constants value, the intrinsic helix pitch , and the droplets’ size in the range from several microns to tens of microns. As a result, the dependence of the forming structure on the droplet size (in our case, the number N of the layer-like structure) should be more complicated compared to the case of strong anchoring.
A formation of the layer-like structure leads to either a local disturbance of the boundary conditions, as in the case of weak surface anchoring [45] or an appearance of the linear surface defect as in the case of strong homeotropic anchoring [38]. The double twisted defect loop is formed near the droplets surface under study (Figure 4 and Figure 5). The linear surface defect transverse the central droplet section at the points located at the isoclinic lines, therefore the director is parallel to the interface near the linear defect. If the cholesteric axis is oriented mainly perpendicular to the film plane, the cholesteric layers are practically invisible (Figure 5c). When changing the microscope focus, the double twisted defect loop can be seen (Figure 5).
The twisted axial-bipolar structure () has the symmetry axis, and the layer-like configuration () has the symmetry axis. A transition from one configuration to another one proceeds smoothly as increases (Figure 5e). The intermediate structures with the defect line deformed around the droplet’s equator are observed at . At that, the deformation degree of this line increases as rises up to 3.95 (Figure 6). The observed structures and corresponding ranges are stable. In this case, the position of the intervals’ boundaries (Figure 5e) should be dependent on the anchoring energy value and/or the intrinsic helix pitch . For instance, in the work of Yoshioka et al. [45], the transition between an axisymmetric double twisted structure () and a layer-like structure occurs at without the formation of intermediate structures.

The nematic mixture LN-396 (Belarusian State Technological University, Minsk, Belarus) doped with the left-handed chiral additive cholesteryl acetate (Sigma Aldrich, St. Louis, MO, USA) was used as a cholesteric. The concentration of cholesteryl acetate was 1.5%, that corresponds to = 9.7 m [52]. The cholesteric was dispersed in thermoplastic poly(isobutyl methacrylate) (PiBMA) (Sigma Aldrich, St. Louis, MO, USA) having the glass transition temperature C. The samples were made by solvent-induced phase separation technique [1]. CLC was added to the 4% solution of polymer and butyl acetate. The weight ratio of the components was CLC:PiBMA = 50:50. The prepared homogeneous solution was poured on the glass substrate and dried in the Petri dish for 24 h. In the result, the polymer dispersed cholesteric liquid crystal films were formed. The average film thickness was 40 m and the droplet size d was varied in the range of 7–45 m. PiBMA specifies for the nematic mixture LN-396 the conical boundary conditions with the director tilt angle at the interface [47]. The CLC droplets were studied by means of the polarising optical microscope (POM) Axio Imager.A1m (Carl Zeiss AG, Oberkochen, Germany) at the temperature C.

The orientational structures in cholesteric droplets with the unique conical boundary conditions with the director tilt angle have been studied. In such droplets, various combinations of topological features were revealed that are inherent to both nematic droplets with conical anchoring [47] and cholesteric droplets with homeotropic boundary conditions [42]. The axisymmetric twisted axial-bipolar configuration characterised by two boojums and the surface circular defect at the droplet’s equator is formed at . It has been shown that the orientational structure intermediate between axisymmetric and layer-like is realised at . In such structure, the defect ring is deformed around the droplet’s equator. The layer-like structure with a minor deformation of cholesteric layers and the twisted defect loop on droplet’s surface is formed at . The untwisting of the cholesteric helix is observed in the layer-like structure, at that the discrepancy between N and decreases as the droplet diameter increases more slowly than in the droplets with the strong homeotropic anchoring [50]. Apparently, the effect is due to the quite weak polar energy of conical anchoring J/m. As a result, both the value of and the size of the droplet should affect the formed structure similar to the case of CLC in the flat layer with tangential-conical boundary conditions, where the orientational structure depends not only on the ratio of layer thickness to the intrinsic helix pitch but also the CLC layer thickness [52]. The composite material under study can be interesting for the development of CLC dispersed systems in which the layer structure uniformity is an important factor, for instance, for optical lasing [53].

A.P.G. and M.N.K. performed the experiments, analysed the optical patterns and orientational structures of CLC droplets, V.Y.Z. supervised the study. All authors wrote and reviewed the manuscript. All authors have read and agreed to the published version of the manuscript.

The authors are grateful for the financial support by the Russian Science Foundation (grant No. 18-72-10036). 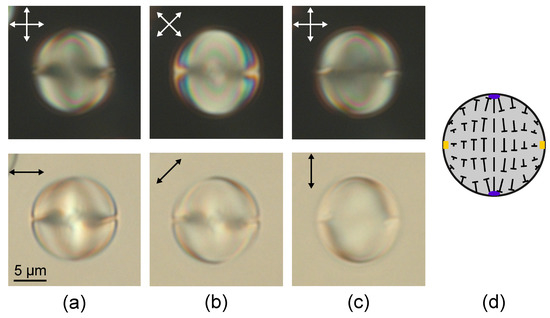 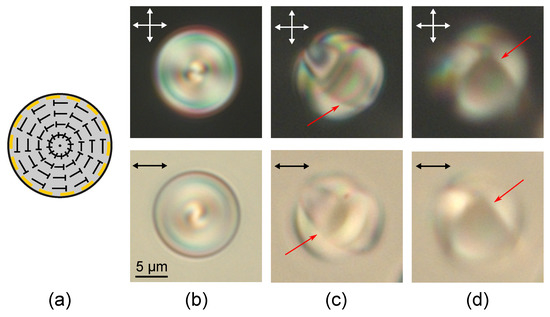 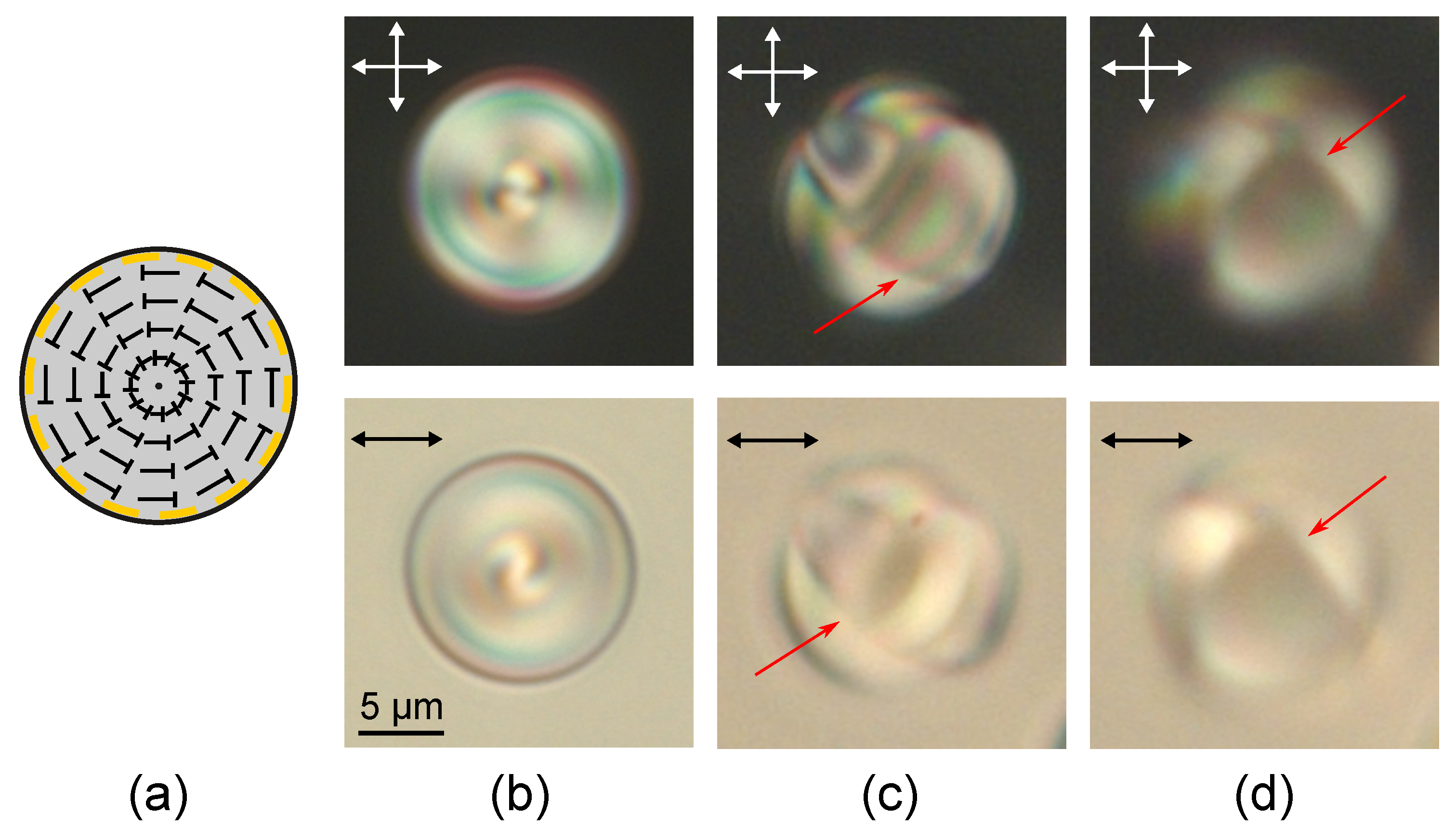 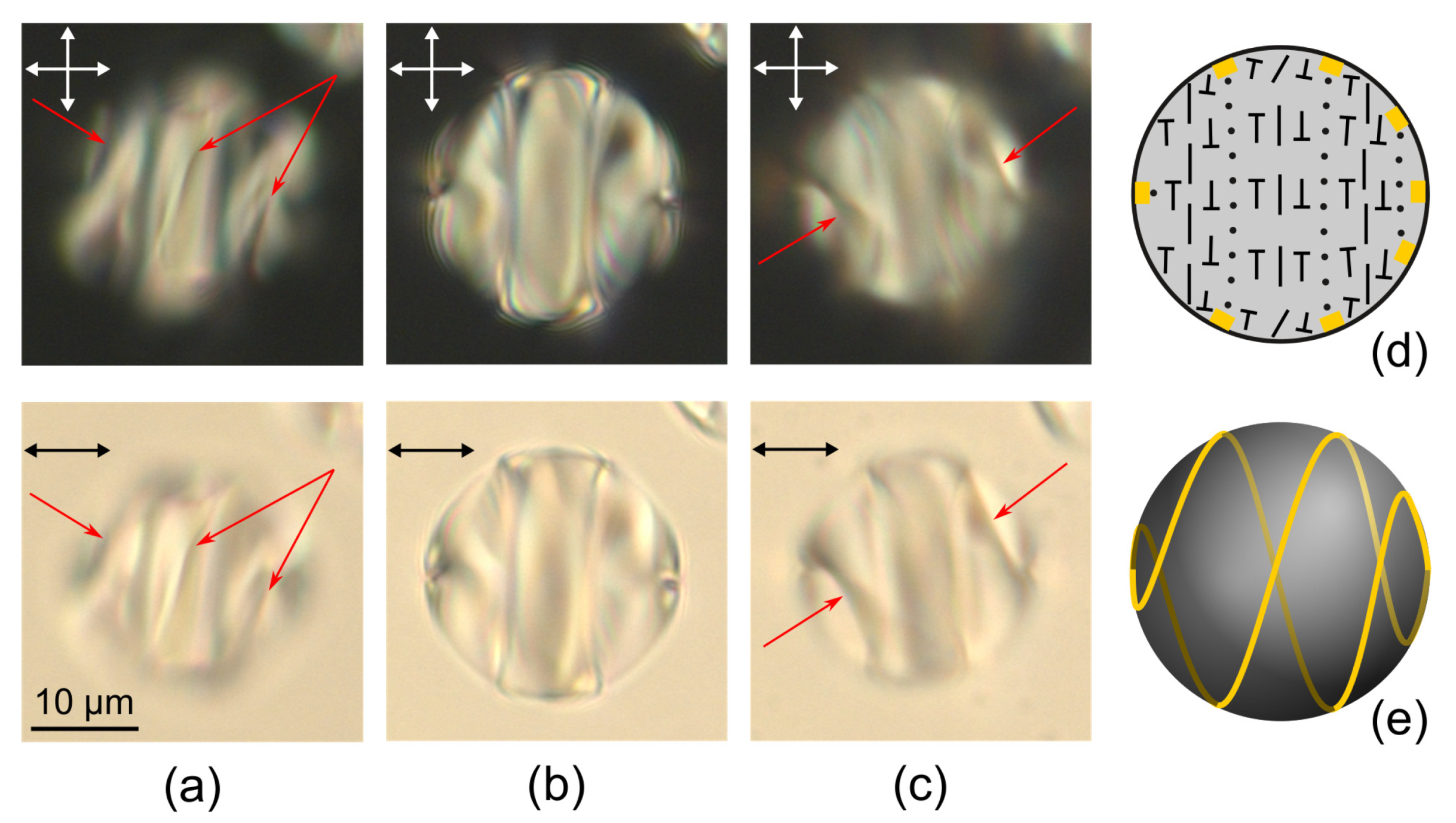 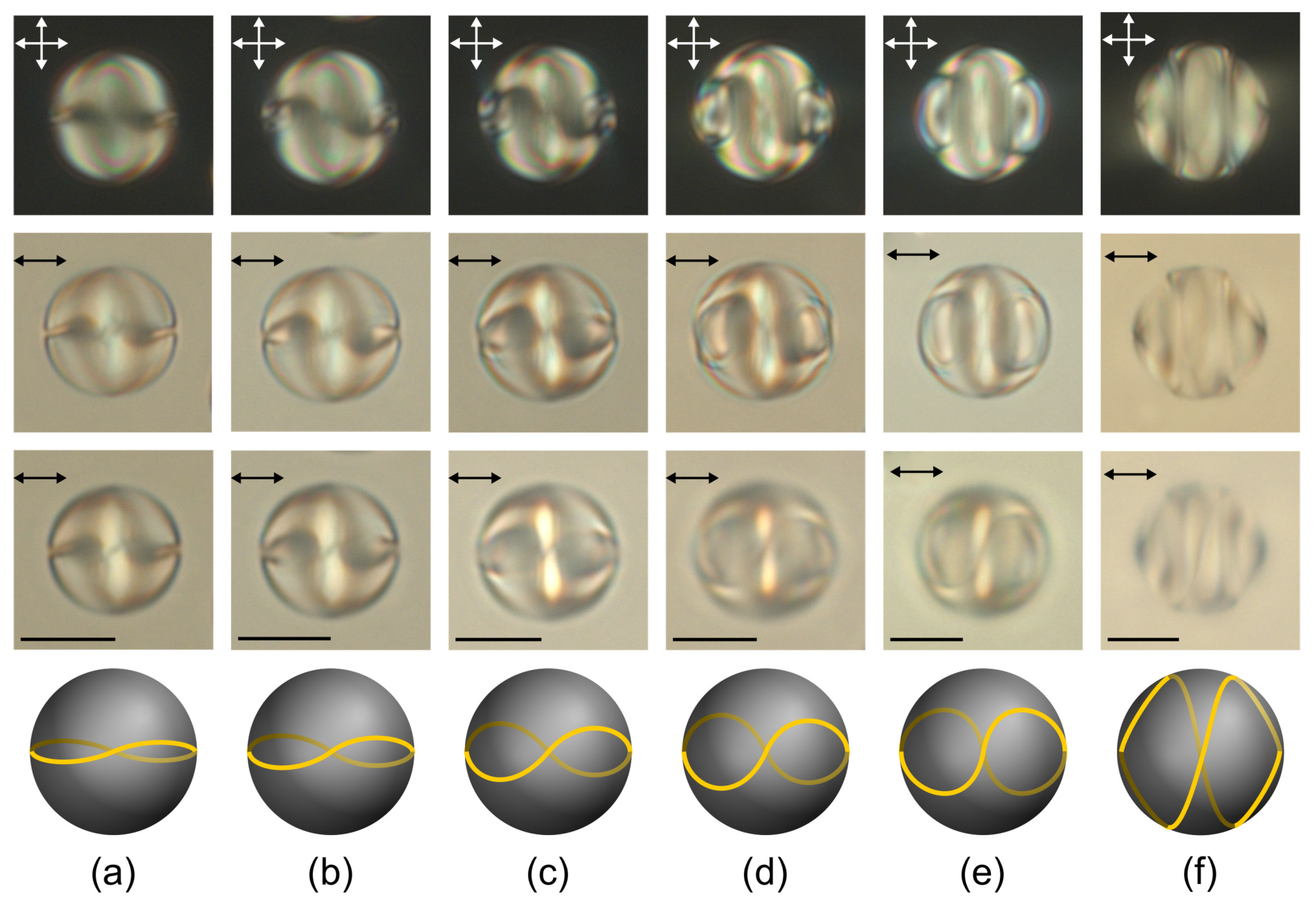