Lamalbid, Chlorogenic Acid, and Verbascoside as Tools for Standardization of Lamium album Flowers—Development and Validation of HPLC–DAD Method
Next Article in Special Issue

New Frontiers for the Use of IP6 and Inositol Combination in Treating Diabetes Mellitus: A Review

Inositol, or myo-inositol, and associated analog molecules, including myo-inositol hexakisphosphate, are known to possess beneficial biomedical properties and are now being widely studied. The impact of these compounds in improving diabetic indices is significant, especially in light of the high cost of treating diabetes mellitus and associated disorders globally. It is theorized that, within ten years, the global population of people with the disease will reach 578 million individuals, with the cost of care projected to be approximately 2.5 trillion dollars. Natural alternatives to pharmaceuticals are being sought, and this has led to studies involving inositol, and myo-inositol-hexakisphosphate, also referred to as IP6. It has been reported that IP6 can improve diabetic indices and regulate the activities of some metabolic enzymes involved in lipid and carbohydrate metabolism. Current research activities have been focusing on the mechanisms of action of inositol and IP6 in the amelioration of the indices of diabetes mellitus. We demonstrated that an IP6 and inositol combination supplement may regulate insulin secretion, modulate serum leptin concentrations, food intake, and associated weight gain, which may be beneficial in both prediabetic and diabetic states. The supplement attenuates vascular damage by reducing red cell distribution width. Serum HDL is increased while serum triglycerides tend to decrease with consumption of the combination supplement, perhaps due to the modulation of lipogenesis involving reduced serum lipase activity. We also noted increased fecal lipid output following combination supplement consumption. Importantly, liver function was found to be preserved. Concurrently, serum reactive oxygen species production was reduced, indicating that inositol and IP6 supplement consumption may reduce free radical damage to tissues and organs as well as serum lipids and blood glucose by preserving liver function. This review provides an overview of the findings associated with inositol and IP6 supplementation in the effective treatment of diabetes with a view to proposing the potential mechanisms of action. View Full-Text
Keywords: Ip6; inositol; diabetes mellitus; myo-inositol; lipid; free radical Ip6; inositol; diabetes mellitus; myo-inositol; lipid; free radical
►▼ Show Figures 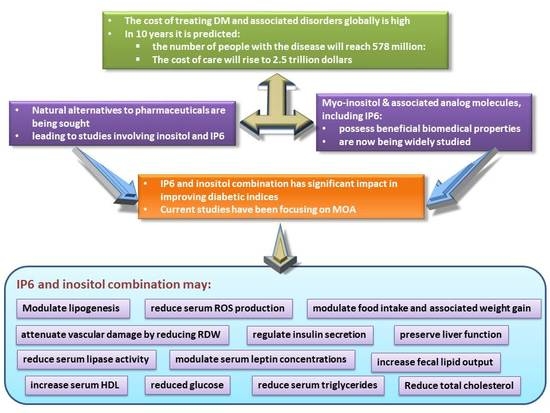