Glioblastomas are the most common and aggressive brain tumors [1]. The patients with malignant glioblastomas usually have poor prognosis [2]. The median survival rate of glioblastoma patients is about 12 months. Temozolomide (TMZ) is the first-line chemotherapeutic drug for therapy of malignant glioblastomas [3]. Nevertheless, TMZ may induce drug tolerance to high-grade glioblastomas, especially in recurrent patients [4]. Thus, the chemoresistance is a serious issue for therapy of human glioblastomas. To build up a novel and effective strategy for treatment of human glioblastomas, it is very critical to discover new chemotherapeutic drugs that can overcome TMZ-induced drug tolerance.
Honokiol (2-(4-hydroxy-3-prop-2-enyl-phenyl)-4-prop-2-enyl-phenol), a small-molecule bisphenol polyphenol, is a major bioactive constituent of the traditional Chinese medicine Magnolia officinalis (Houpo) [5]. Amorati et al. demonstrated that the hydroxyl group of the second phenol possesses better chemical reactivity with peroxyl radicals [6]. Honokiol can effectively treat a variety of diseases, including anxiety and nervous disturbances, thrombotic stroke, typhoid fever, and dermatologic disorders [5]. Drug resistance to therapy in cancer is multifaceted and challenged until now. Interestingly, Tian et al. demonstrated that honokiol could synergize chemotherapeutic drugs in multidrug resistant breast cancer cells via apoptotic and programmed necrotic death [7]. A previous study used pharmacogenomics and molecular docking approaches to supplementary show epidermal growth factor receptor (EGFR)-transfected tumor cells were collaterally sensitive to honokiol compared with wild type cells [8]. Recently, honokiol is reported to be a promising natural compound in overcoming acquired resistance to cetuximab, a monoclonal antibody against EGFR used for treatment of head and neck squamous cell carcinoma and metastatic colorectal cancer [9]. As a result, targeting drug resistance by using honokiol alone or combined with other chemotherapy agents can provide de novo therapeutic strategies.
A previous study reported low toxicity of honokiol to normal human astrocytes and murine cerebrovascular endothelial cells [10]. The blood-brain barrier (BBB) is the major limitation for therapy of brain diseases [11]. Notably, honokiol was shown to pass through the BBB in vitro and in vivo [10]. Our laboratory reported the benefits of honokiol to induce apoptosis of neuroblastoma cells and glioblastoma cells via an intrinsic mitochondria-dependent pathway [10,12]. Moreover, the molecular mechanisms were confirmed through a p53/phosphoinositide 3-kinases (PI3K)/mammalian target of rapamycin (mTOR) mechanism and an endoplasmic reticular stress/extracellular signal-regulated kinases (ERK)1/2 pathway in neuroblastoma cells and glioblastoma cells, respectively [13,14]. In addition, autophagy induced by cancer therapy frequently contributes to cancer cell survival [15]. The effects of honokiol on autophagy of neuroblastoma cells and glioblastoma cells were further identified [12,13,14,15]. Furthermore, cancer stemness is the other critical cause for drug resistance [16]. Previous studies presented the potential of honokiol on suppressing sphere formation and xenograft growth of oral cancer stem cells [17,18]. Thus, honokiol has the potential for treatment of drug-resistant glioblastomas.
Antiapoptosis of cancer cells against chemotherapy is the other important reason for chemoresistance [19]. Extrinsic and intrinsic pathways are involved in cell apoptosis. In an extrinsic pathway, caspase-8 is activated following binding of extracellular cytotoxic Fas ligand to its death receptor [20]. In contrast, activation of capase-9 by release of mitochondrial cytochrome c to the cytoplasm can trigger apoptosis via an intrinsic mechanism [20,21]. Recently, we have shown that honokiol could synergistically improve TMZ-induced killing to human malignant glioblastoma cells through a mitochondrion-dependent apoptotic mechanism [22,23]. Hence, caspase-8 and caspase-9 are two typical molecules specifically triggering cell apoptosis through an extrinsic death ligand-dependent mechanism and an intrinsic mitochondria-dependent pathway, respectively [20,24]. Based on previous studies, honokiol is able to kill glioblastoma cells by inducing autophagic and apoptotic insults. Elucidating the apoptotic mechanism is crucial for clinical application of honokiol for treatment of drug-resistant glioblastomas. Therefore, this study was aimed to further evaluate the effects of honokiol on the drug-tolerant glioblastoma cells and the possible mechanisms, especially in the caspases-8/-9-involed apoptotic pathways.

4.2. Immunohistochemical Analyses of Caspase-8 and Caspase-9

Our study was approved by the joint-institutional review board of Taipei Medical University. Specimens of human meningioma and glioblastoma tissues were identified and acquired from the Department of Pathology, Shuang Ho Hospital, Taipei Medical University, Taipei, Taiwan. These brain specimens were incubated with 0.2% Triton X-100. Mouse monoclonal antibodies against human caspase-8 and caspase-9 (Santa Cruz Biotechnology, Santa Cruz, CA, USA) were used for immunodetections of caspase-8 and caspase-9, as described previously [35].

Human TMZ-resistant glioblastoma cells were prepared and selected, as described previously [37]. TMZ was purchased from Enzo Life Sciences (Farmingdale, NY, USA) and was dissolved in dimethyl sulfoxide (DMSO). Human U87-MG cells (105) were seeded in 12-well tissue culture plates and maintained in a culture medium supplemented with TMZ at 50 μM. Two days later, U87-MG cells were subsequently dissociated, seeded at 1/5~1-fold dilutions in 96-well tissue culture plates, and then maintained in a culture medium with 100 μM TMZ. When a surviving colony produced, cells were dissociated with trypsin and allowed to grow in the same well. Among these drug-resistant colonies, colony 9 (U87-MG-R9) was more malignant and had a more-rapid growth rate. Honokiol, purchased from Sigma (St. Louis, MO, USA), was freshly dissolved in DMSO. The purity of honokiol used in this study was more than 98%. Human U87-MG and U87-MG-R9 cells were exposed to honokiol, TMZ at 100 μM, and a combination of honokiol and TMZ for various time intervals. Control cells received DMSO (less than 0.1%).

Cell viability was assayed using a colorimetric method as described previously [39]. Human U87-MG-R9 cells were seeded in 96-well tissue culture plates at a density of 1 ×104 cells per well overnight. After treatment with honokiol, the cells were cultured in new medium containing 3-(4,5-dimethylthiazol-2-yl)-2,5-diphenyltetrazoliumbromide (0.5 mg/mL) for a further 3 h. The blue formazan products in cells were dissolved in DMSO, and the optical densities were spectrophotometrically measured at a wavelength of 550 nm.

Activities of caspase-3 and caspase-6 were assayed following a previously described method [40,41]. After drug treatment, human TMZ-resistant U87-MG-R9 glioblastoma cells were lysed. Cell extracts (25 mg of total protein) were incubated with 50 mM of a specific fluorogenic peptide substrate in 200 mL of a cell-free system buffer. The peptide substrates for the caspase-3, -6, 8, and -9 assays were DEVD, VEID, IETD, and LEHD, respectively. The peptides were conjugated to 7-amino-4-trifluoromethyl coumarin for fluorescence detection. Intensities of the fluorescent products were measured with a spectrometer.

DNA fragmentation in human U87-MG glioblastoma cells was quantified using a cellular DNA fragmentation enzyme-linked immunosorbent assay (ELISA) kit (Boehringer Mannheim, Indianapolis, IN, USA), as described previously [43]. Briefly, 2 × 105 human U87-MG-R9 glioblastoma cells were subcultured in 24-well tissue culture plates and labeled with 5-bromo-2′-deoxyuridine (BrdU) overnight. The drug-resistant glioblastoma cells were harvested and suspended in culture medium. One hundred microliters of the cell suspension were added to each well of 96-well tissue culture plates. Human U87-MG-R9 cells were cocultured with honokiol and TMZ for another 8 h at 37 °C in a humidified atmosphere of 5% CO2. Amounts of BrdU-labeled DNA in the cytoplasm were quantified using an Anthos 2010 microplate photometer (Anthos Labtec Instruments, Lagerhausstrasse, Wals/Salzburg, Austria) at a wavelength of 450 nm.

Necrotic cells were quantified using a photometric immunoassay according to a previously described method [10]. Briefly, human U87-MG-R9 glioblastoma cells (1 × 105 cells) were seeded in 96-well tissue culture plates overnight. After drug administration, cell lysates and culture medium were collected, and necrotic cells were immunodetected using mouse monoclonal antibodies against histone. After an antibody reaction and washing, the colorimetric product was measured at 405 nm against a substrate solution as a blank. DMSO at 1 mM was administered into human TMZ-resistant glioblastoma cells for different time intervals as a positive control and the necrotic analysis was then carried out.

For the inhibition assay, human drug-resistant U87-MG-R9 glioblastoma cells were pretreated with Z-LEHD-FMK, an inhibitor of caspase-9, at 50 mM for 1 h, and then exposed to honokiol for 72 h following the method described previously [15]. Intensities of the fluorescent products were measured using a LS 55 spectrometer of PerkinElmer Instruments (Shelton, CT, USA).

The statistical significance of differences between groups was evaluated using a one-way analysis of variance (ANOVA) with Duncan’s multiple-range test. Differences were considered statistically significant at p-values of < 0.05. Each value represents the mean ± SD.

The following are available online at https://www.mdpi.com/1420-3049/25/6/1450/s1, Figure S1. Effects of honokiol on proliferation and viability of human malignant drug-resistant glioblastoma cells. 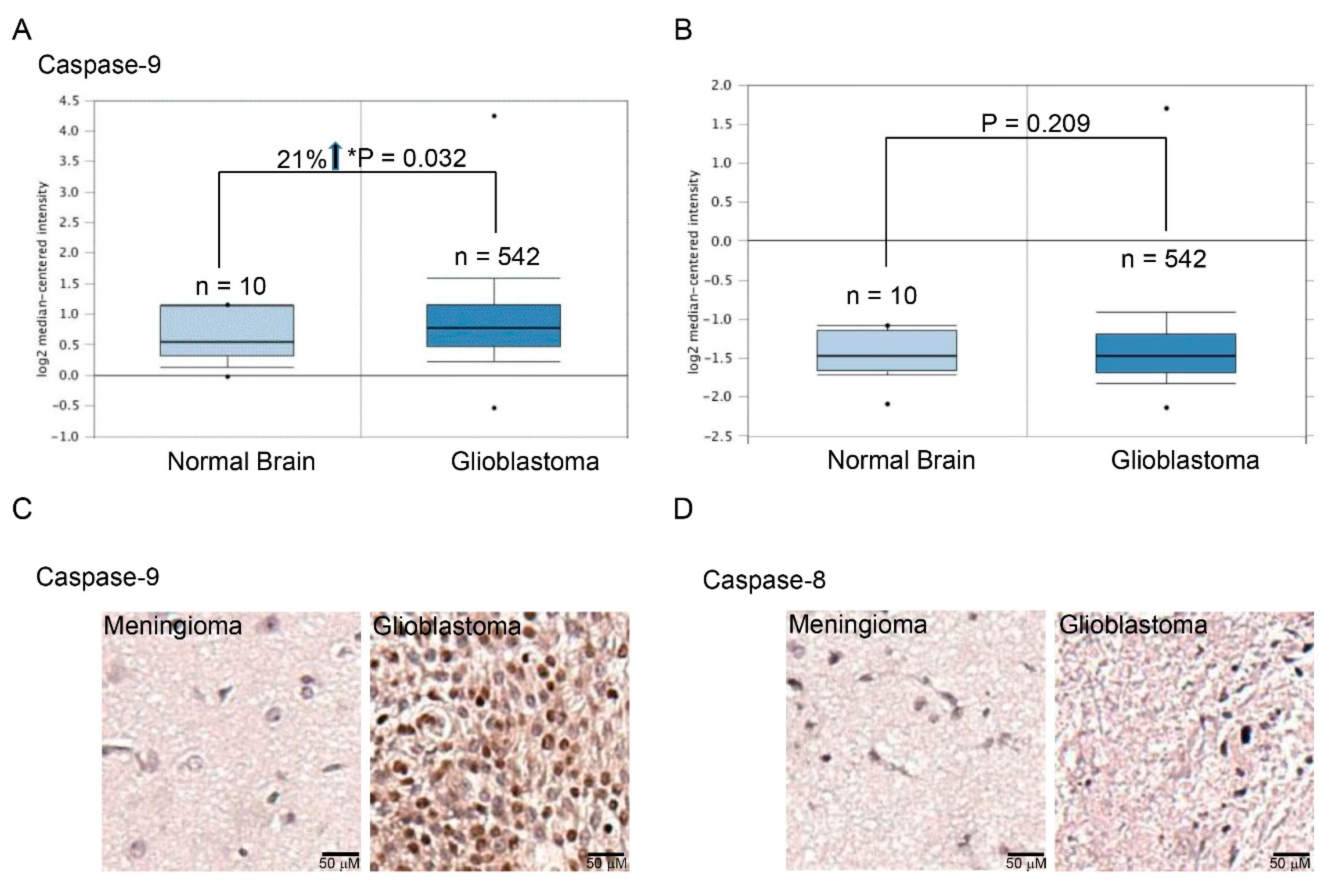 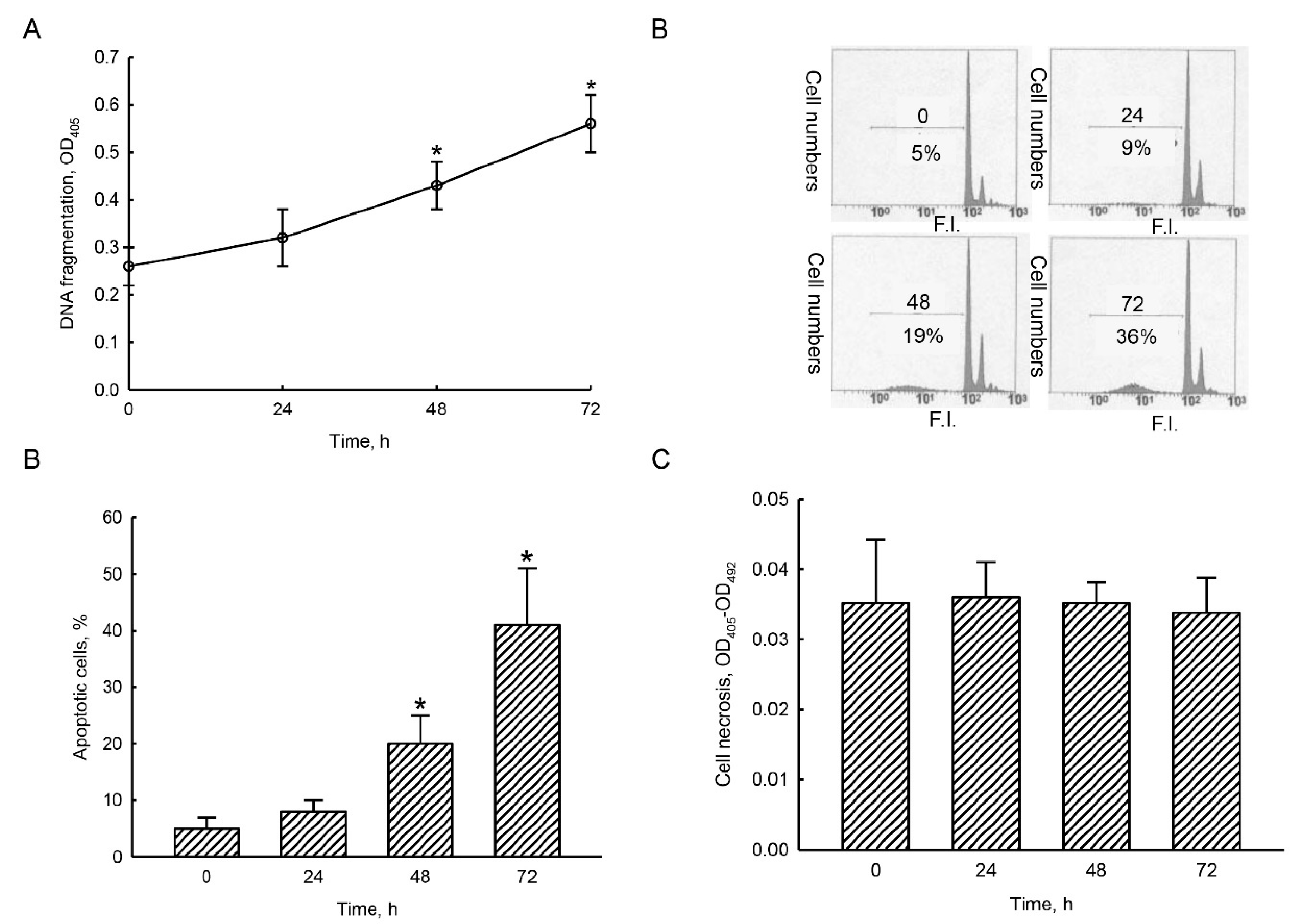 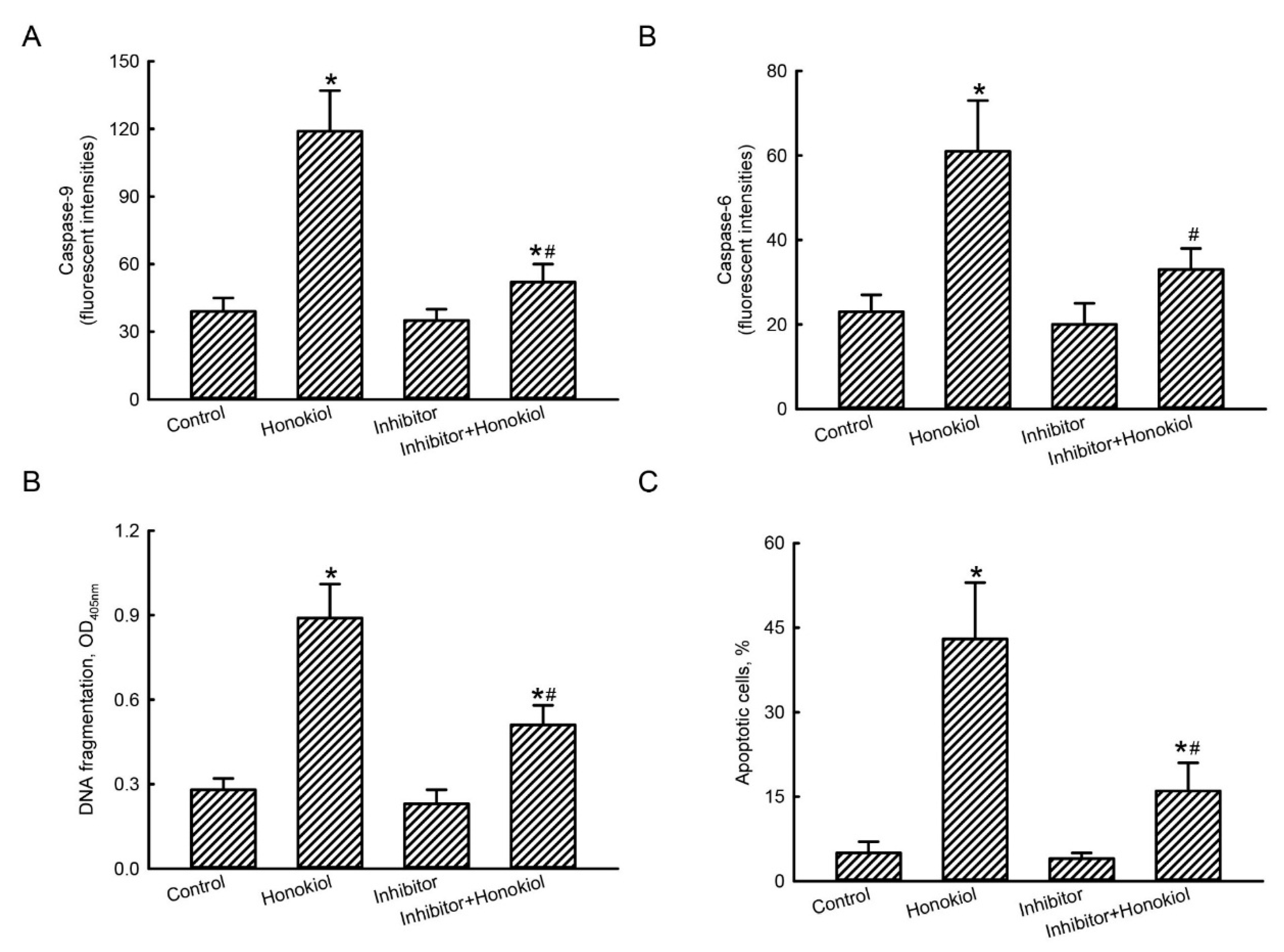