Synthesis and Characterization of a Binuclear Copper(II)-dipyriamethyrin Complex: [Cu2(dipyriamethyrin)(μ2-1,1-acetato)2]
Next Article in Special Issue

Phosphonopeptides Revisited, in an Era of Increasing Antimicrobial Resistance

Given the increase in resistance to antibacterial agents, there is an urgent need for the development of new agents with novel modes of action. As an interim solution, it is also prudent to reinvestigate old or abandoned antibacterial compounds to assess their efficacy in the context of widespread resistance to conventional agents. In the 1970s, much work was performed on the development of peptide mimetics, exemplified by the phosphonopeptide, alafosfalin. We investigated the activity of alafosfalin, di-alanyl fosfalin and β-chloro-L-alanyl-β-chloro-L-alanine against 297 bacterial isolates, including carbapenemase-producing Enterobacterales (CPE) (n = 128), methicillin-resistant Staphylococcus aureus (MRSA) (n = 37) and glycopeptide-resistant enterococci (GRE) (n = 43). The interaction of alafosfalin with meropenem was also examined against 20 isolates of CPE. The MIC50 and MIC90 of alafosfalin for CPE were 1 mg/L and 4 mg/L, respectively and alafosfalin acted synergistically when combined with meropenem against 16 of 20 isolates of CPE. Di-alanyl fosfalin showed potent activity against glycopeptide-resistant isolates of Enterococcus faecalis (MIC90; 0.5 mg/L) and Enterococcus faecium (MIC90; 2 mg/L). Alafosfalin was only moderately active against MRSA (MIC90; 8 mg/L), whereas β-chloro-L-alanyl-β-chloro-L-alanine was slightly more active (MIC90; 4 mg/L). This study shows that phosphonopeptides, including alafosfalin, may have a therapeutic role to play in an era of increasing antibacterial resistance. View Full-Text
Keywords: phosphonopeptides; alafosfalin; carbapenemase; antimicrobial resistance; glycopeptide-resistant enterococci; MRSA phosphonopeptides; alafosfalin; carbapenemase; antimicrobial resistance; glycopeptide-resistant enterococci; MRSA
►▼ Show Figures 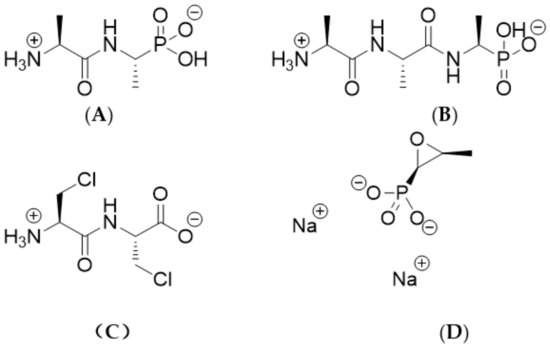